SAGA: Heroics at the Holy Wood

In my last post (The Battle for the Falten Pass), I mentioned in passing that Steve and I had played another game as well as our 6mm Napoleonic one.  We did indeed; this was a 6pt SAGA game, using the Sacred Ground scenario.  In this scenario, 3 terrain features of cultural importance to both sides are placed on the table.  Points are scored at the end of each enemy turn for friendly figures that occupy any of these features. Obviously, it's a good idea to move your own troops into these sacred sites and also to kick out any enemies who are there... 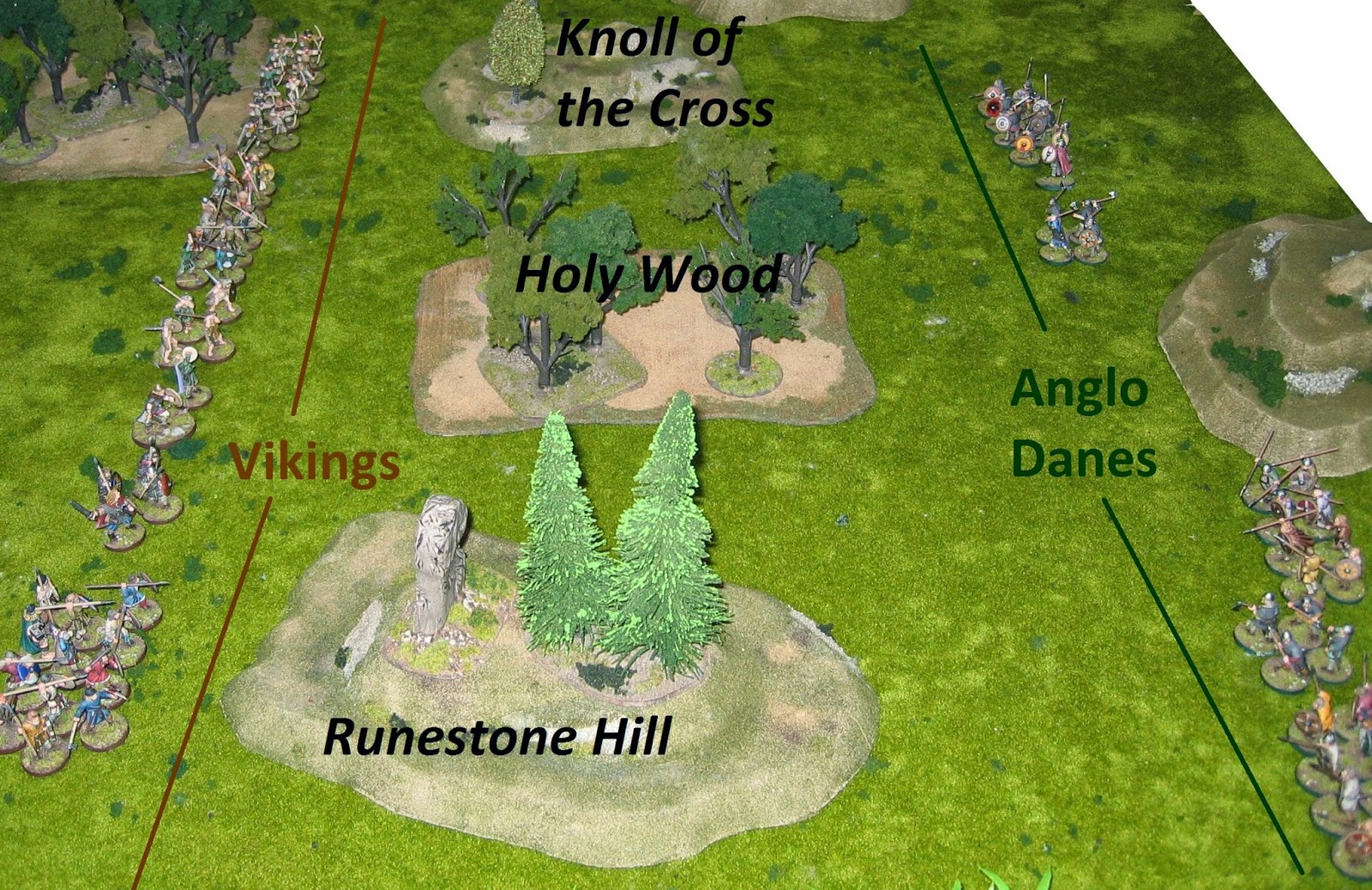 For this game, I fielded a Viking warband as follows:
Steve took my newly-completed Anglo-Danes.  I'm guessing that these came from Northumbria or thereabouts, rather than further south, but we didn't specify that:
So, the Vikings hard considerably more men, but the Anglos were better equipped and trained for the most part.  I also had a bard, which meant that I/Lief would score extra points for heroic slaughter (as long as Kraki saw it!), but couldn't join another friendly unit in a fight.  Lief's victories would need to be unassisted!

"Granddad, Auntie Svava says that you knew Leif Gunnarson and that you saw him fighting.  Is it true?"
The old man looked up from his seat by the fire, where he had been whittling a stick.  He considered for a moment, debating internally whether he had the energy to deal with 3 boisterous children right now.  However, he'd been a bard and a storyteller all his life and he couldn't resist the possibility of enthralling yet another audience.
"Yes, that's right - I sailed with Lief when he went a-Viking"  He paused to let the words sink in, but the children were too cunning to interrupt.
"It happened like this.  We had returned to a place near Yorvik, in Northumbria.  Leif's father had erected an enormous runestone there to commemorate his deeds.  Biggest runestone I ever saw.  Huge, it was and covered with the most intricate carving."
Kraki shifted his position, trying to find a comfortable spot on the sheepskins that his daughter-in-law had dutifully provided for him.  Not that they were as good as the furs he had in his youth, but what could you expect from today's generation?  They just didn't know how to do anything properly.  He turned back to the expectant ring of faces.
"Well, we discovered that the followers of the White Christ had put up their own cross near to Leif's stone.  More than that, a party of them were on their way to pull down the runestone.  When Leif heard that, he was furious and swore a deep oath that he would kill all the Anglos or die trying..."

For some reason, the 3 pieces of sacred ground were slightly closer to the Viking party than to the Anglo Danes.  On turn 1, the Vikings moved first and force-marched:

The Knoll of the Cross

Thurstan's Christians weren't going to stand by idly and let the Vikings get away with this!  However, they hard rather further to go to reach the sacred sites, so evicting the enemy would have to be done piecemeal. 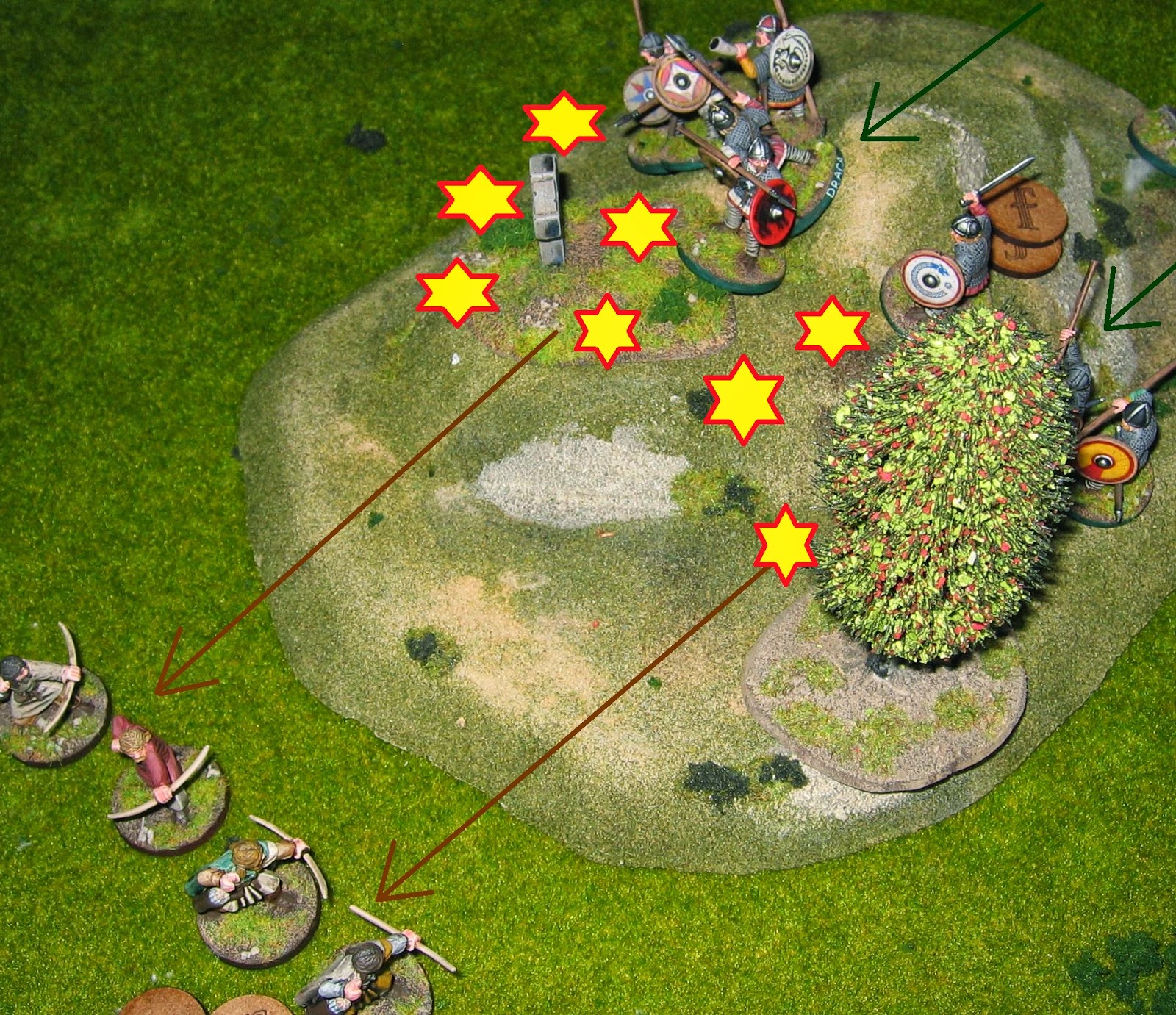 First blood went to the largest unit of huscarls.  The Anglo Dane elite charged towards the Viking levy and were in amongst them before any of the archers could shoot.  Result: 8 archers dead for no loss to the Anglos (apart from some fatigue).  As the Viking player, this was not at all how I wanted things to happen!  Still, I scored quite a lot of points for my men in the other 2 terrain features this turn. 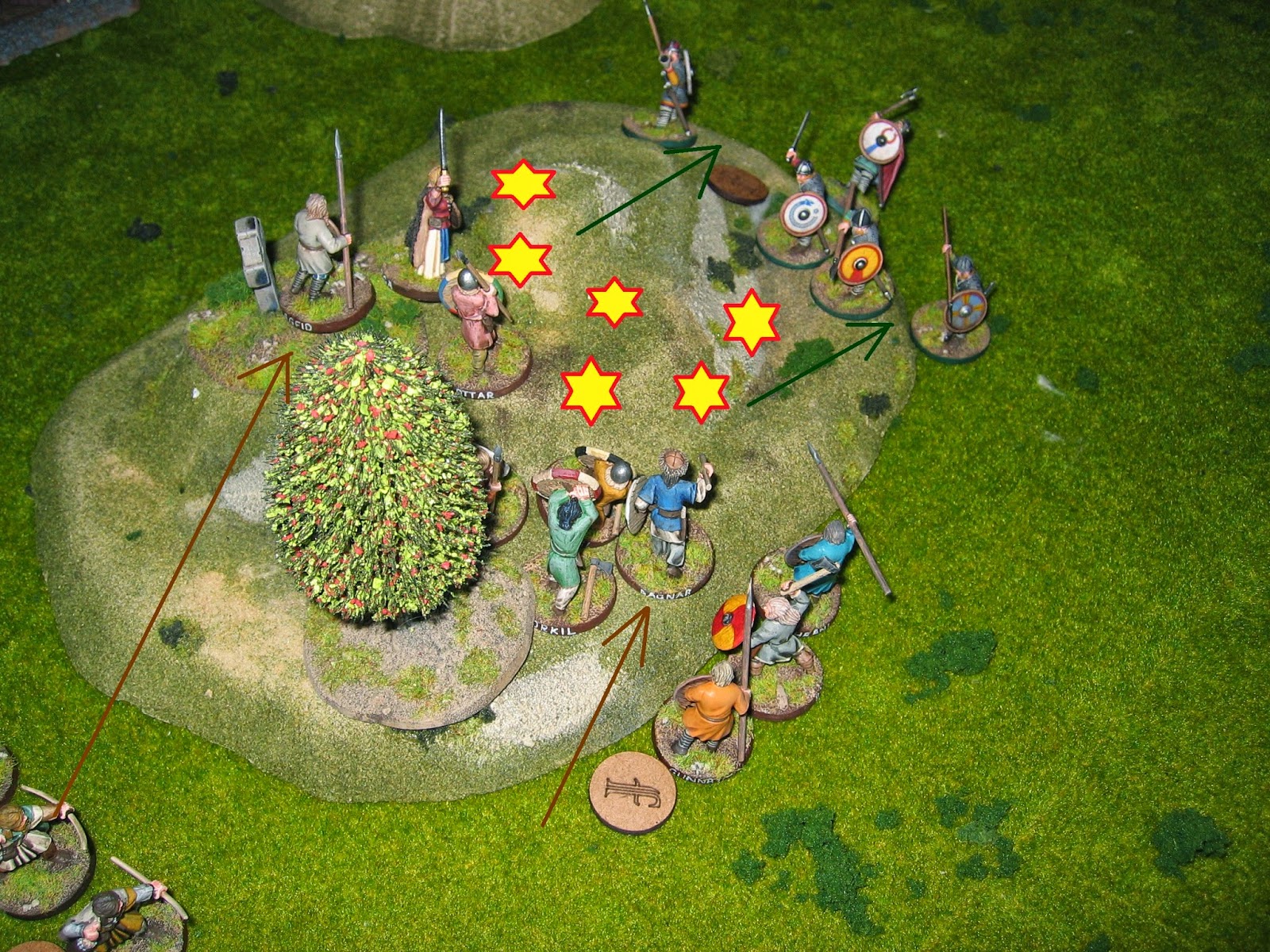 Well, this wasn't good enough!  "Get them, lads!" I called, and 12 powered-up Viking bondi counter-attacked.  They killed several of the huscarls and sent the remainder reeling back off the knoll, though some Viking warriors fell as well. Sadly for the Vikings, this wasn't the end of it.  Thurstan himself rallied his remaining huscarls and charged with them back up the hill.  They killed 2 bondi without loss and the Vikings lost a further 3 warriors when Thurstan and the huscarls used The Push ability from the Anglo-Dane battleboard [this adds extra casualties to a disengaging enemy]. 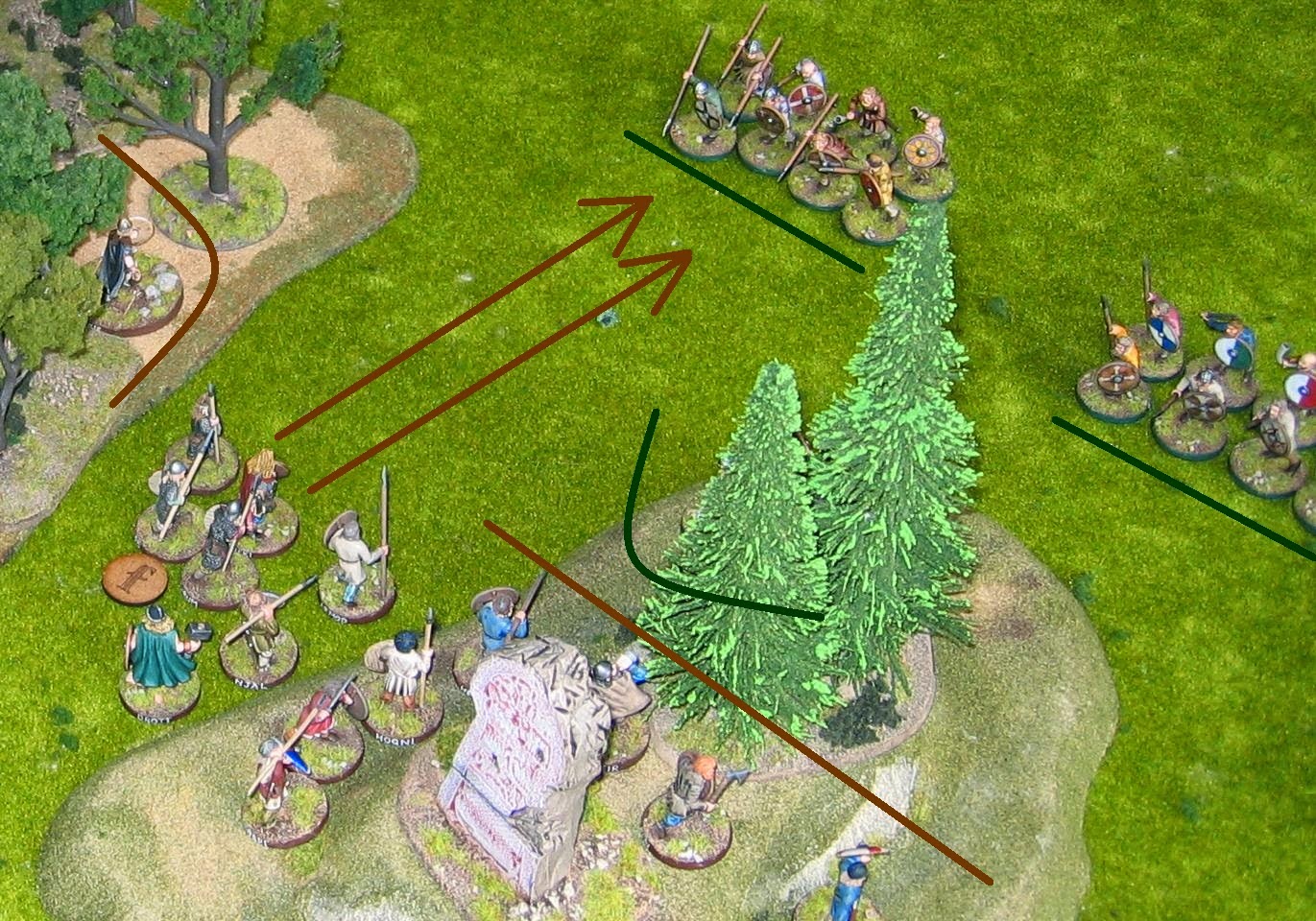 Over on the other side of the field, the 4 Viking hirdmen decided to pre-empt the Anglo Danes and charge one of their warrior units. 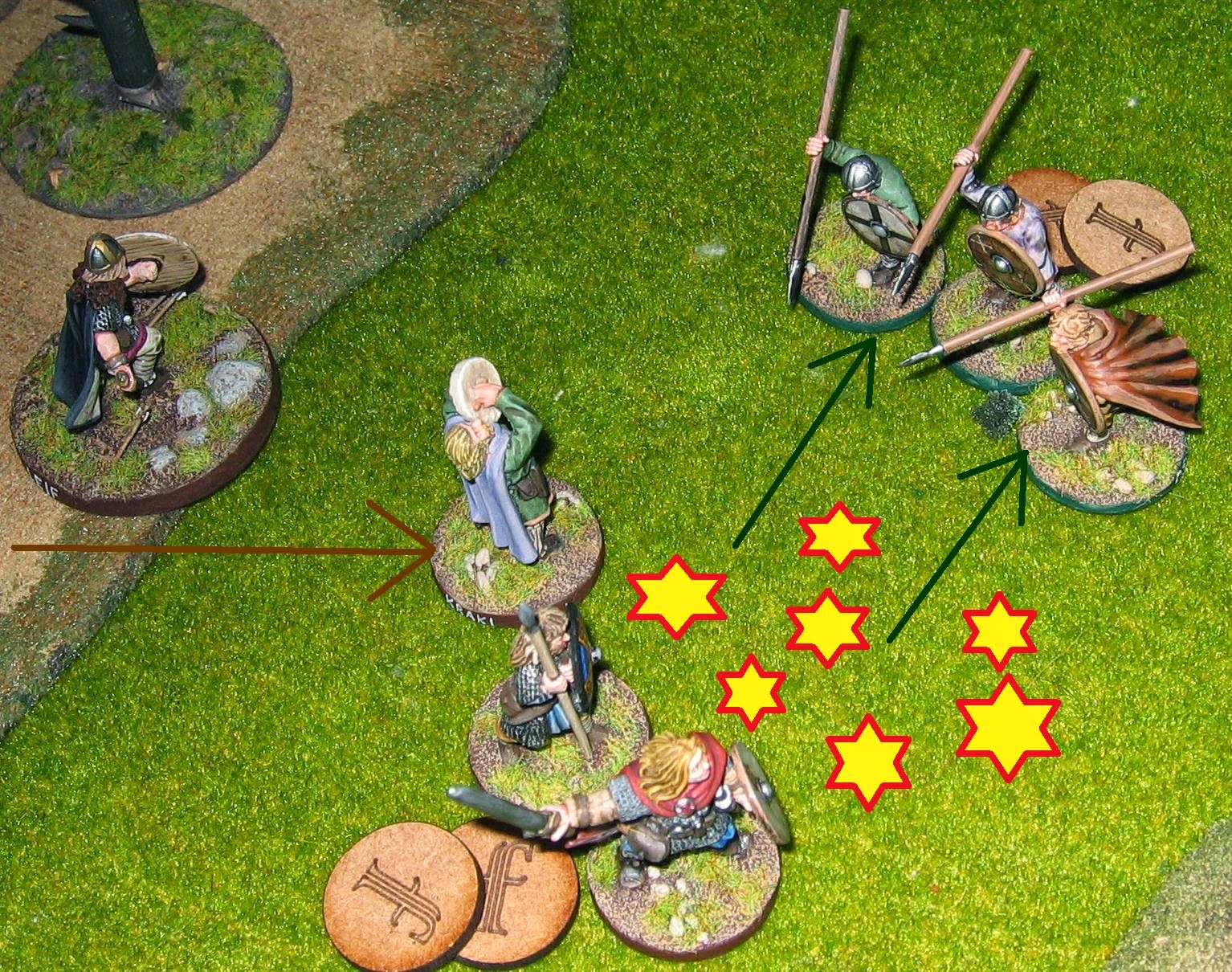 The Viking attack killed 5 Anglo Danes, but the hirdmen lost 2 of their own number in return.  That's only slightly better than break-even, so I wasn't best pleased.  Kraki strode forward to take a closer look.  Perhaps he could use this in a new saga? 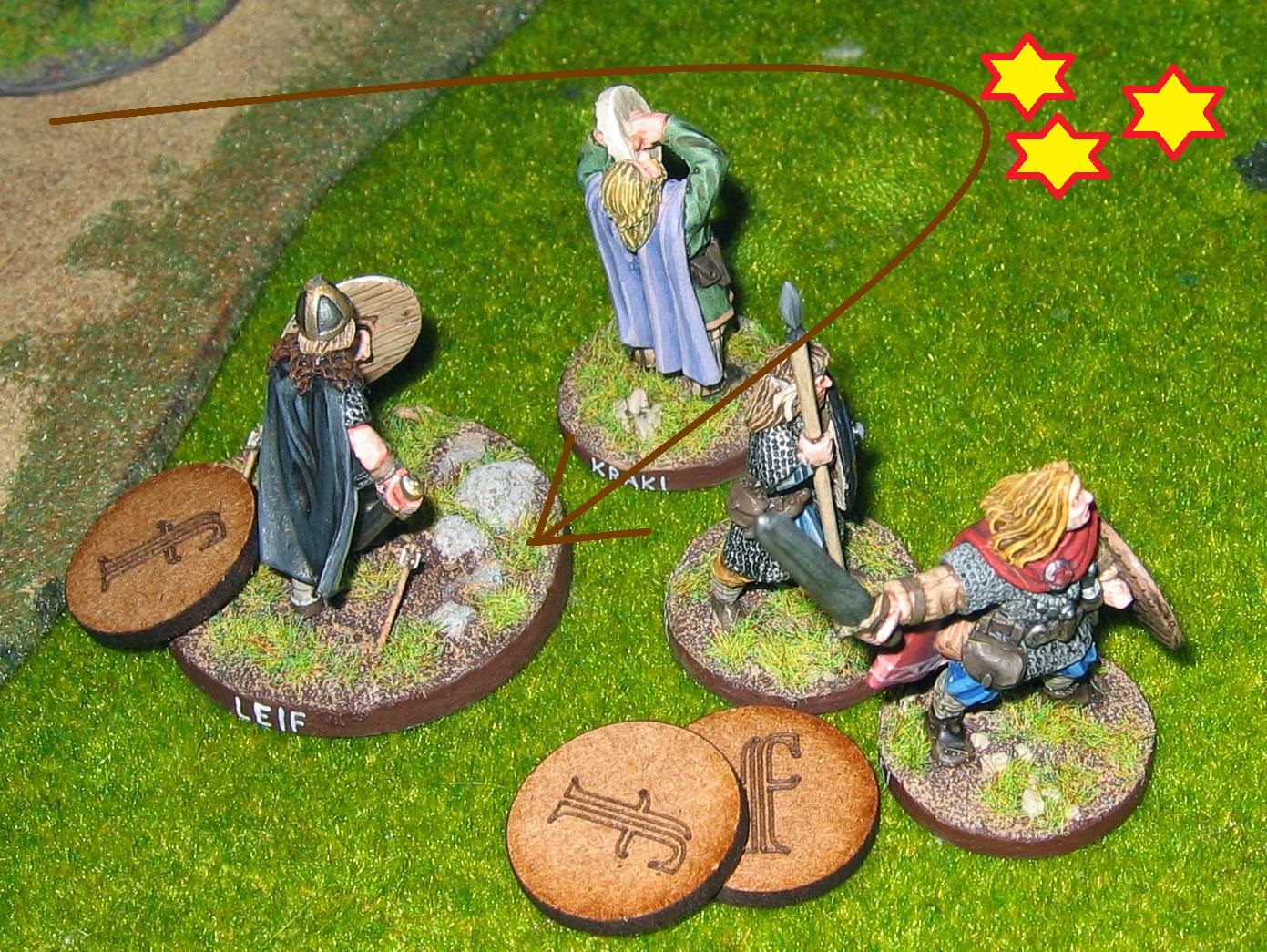 Making sure that the bard was watching, Leif leaped forwards, killed the 3 remaining Anglos and then walked back to his own men.
"What did you think of that, Kraki?" he asked.  "Impressive, eh?"
The bard replied "Are you kidding?  Killing 3 tired peasants?  Hardly the stuff of legend, I think!"
Leif glowered at him, but didn't say anything else.  Skalds were a tricky bunch; they often appeared blasé about one's deeds until they were paid to sing of them. 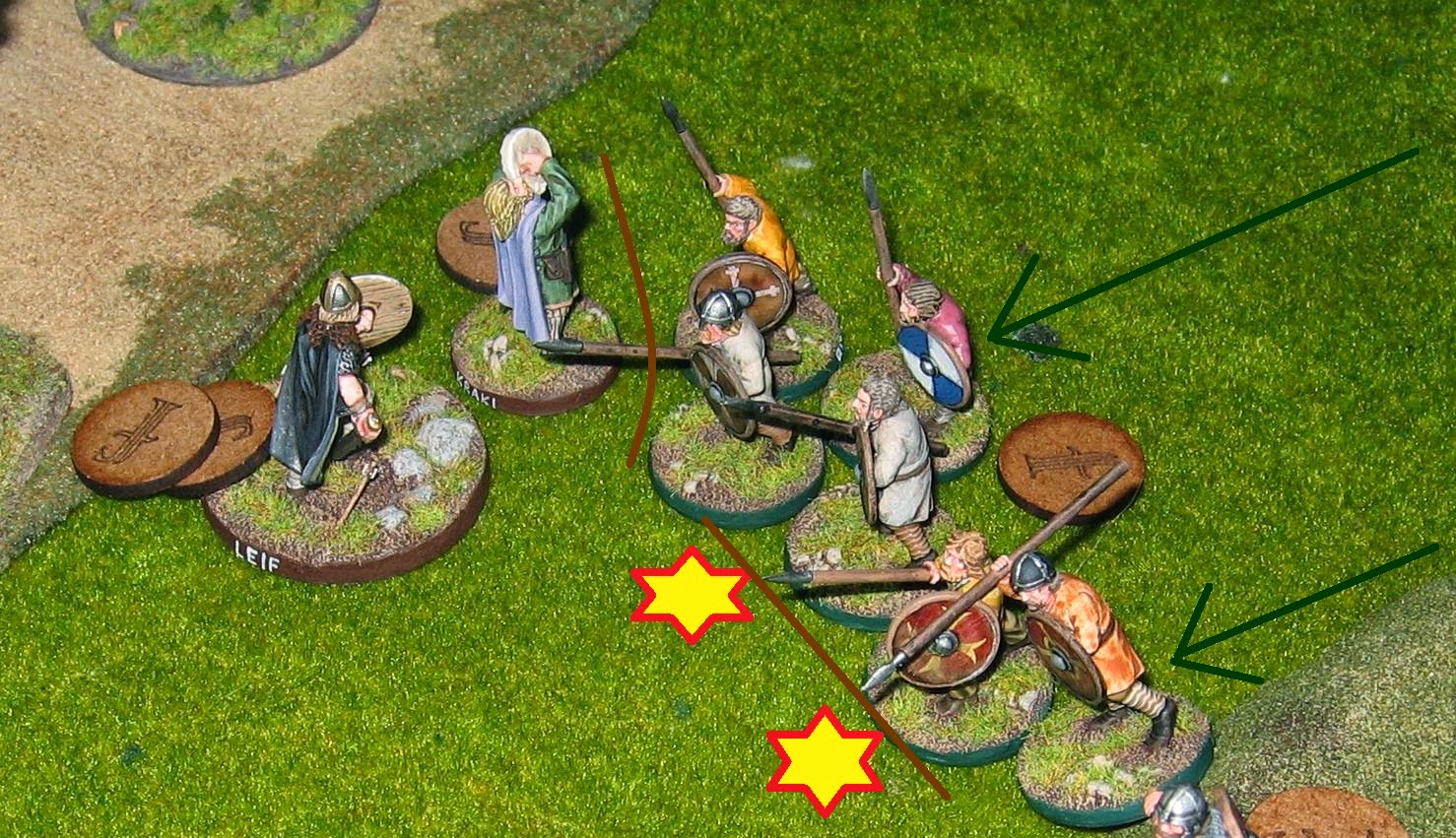 While they were arguing, another large group of Anglo Dane warriors charged the last 2 Viking hirdmen and slew them. 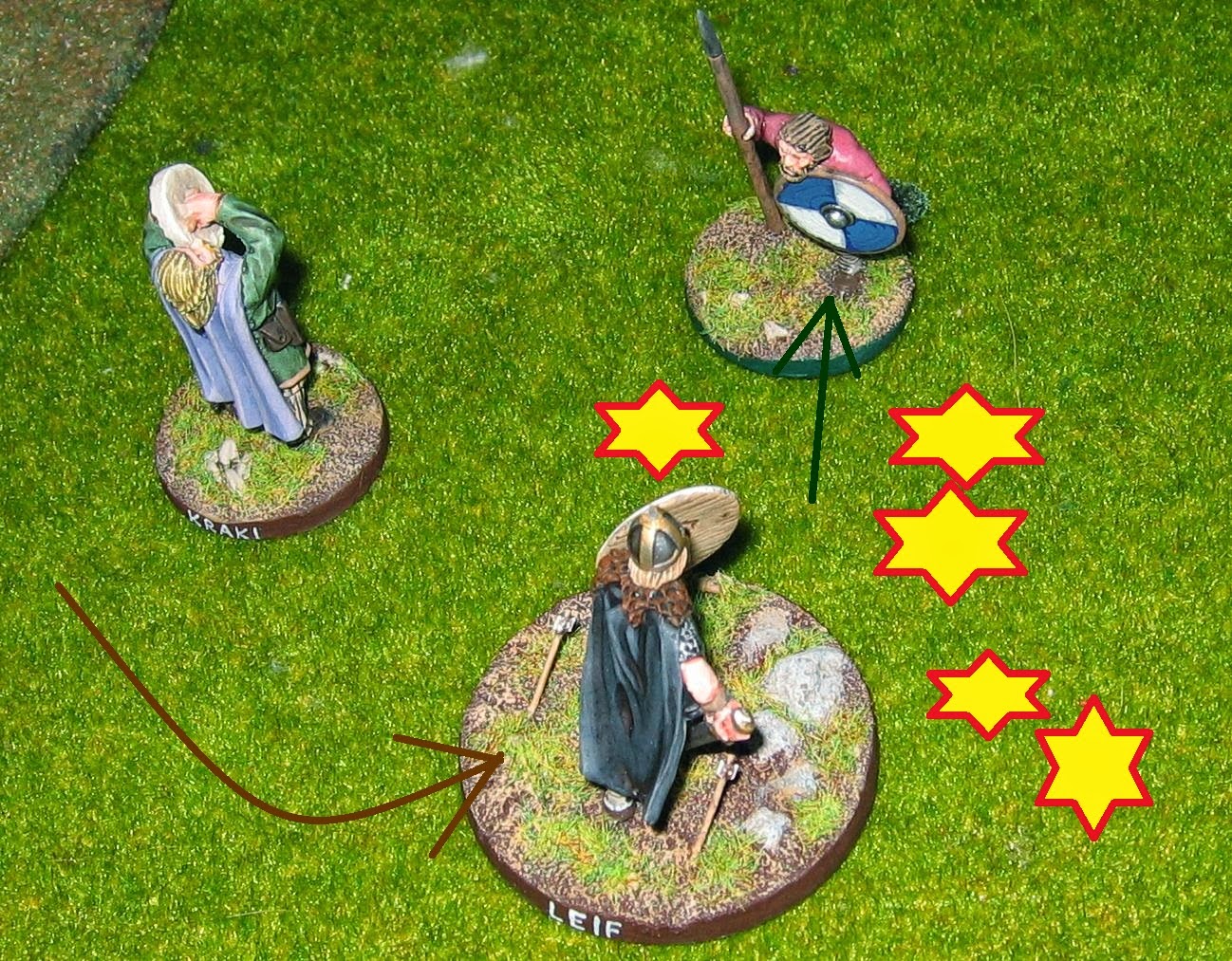 "Right, I'm on again" cried Leif.  "Watch this!"  The warlord strode forward and laid about the enemy with his sword.  5 of the warriors fell beneath his blade before the last man backed away fearfully [Leif was well boosted for this fight by abilities from the Viking battle board.  In fact, I was somewhat disappointed that he didn't kill all 6 of the enemy, as the survivor would still count as a unit when calculating SAGA dice for the Anglo Danes].  This time, even Kraki had to admit that the Viking chieftain was quite impressive in a fight. 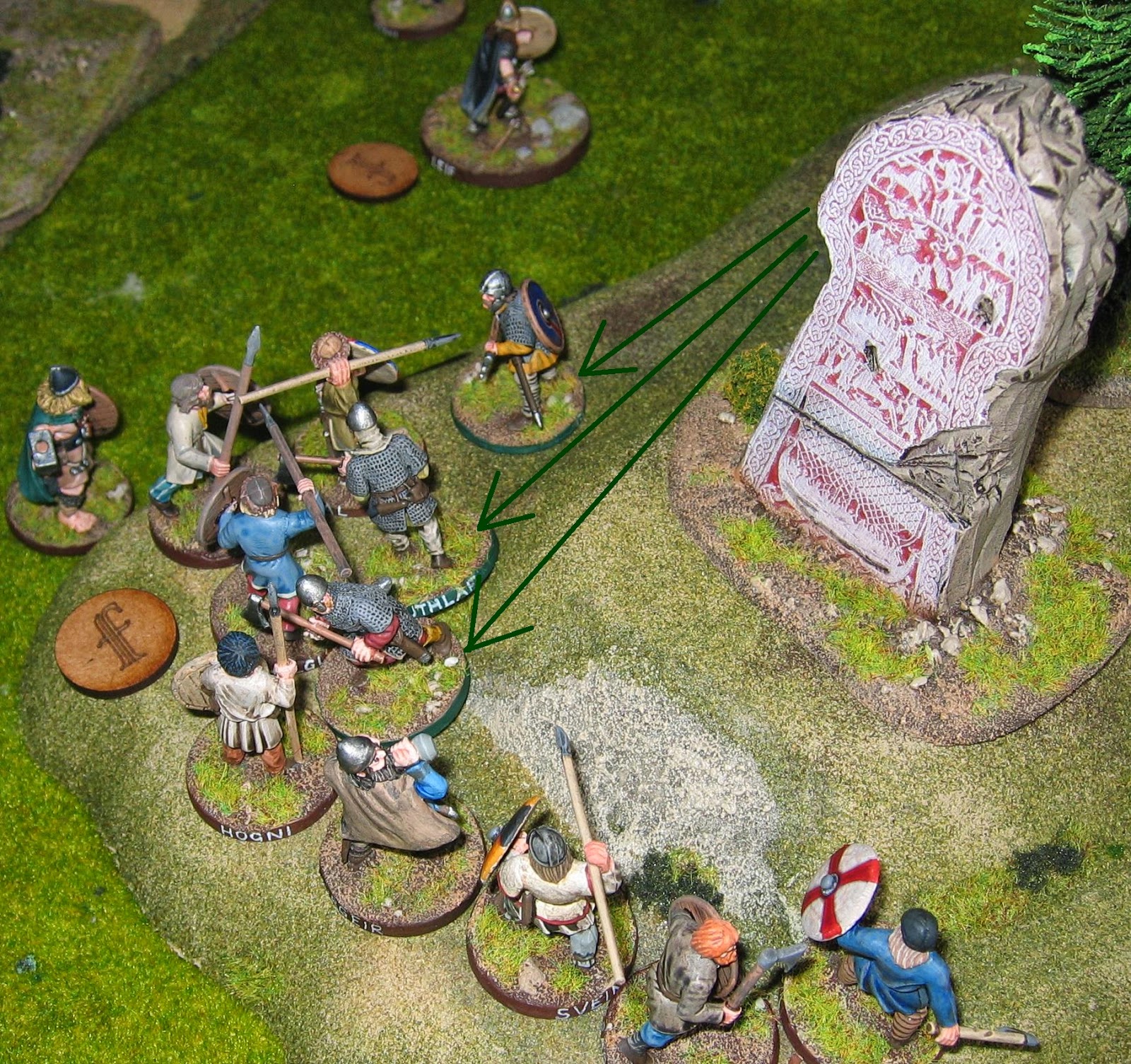 Nearby, three Anglo Dane axemen had been skirting the side of Runestone Hill.  They now decided to charge the bondi who were protecting the monument.  Even though the trio were heavily outnumbered, they hoped that their fearsome axes and better armour would see off the Vikings.  It wasn't to be; the Anglos were wiped out in return for killing just a single enemy.  I guess that the Vikings were pumped from watching their warlord's heroics!

Back in the middle 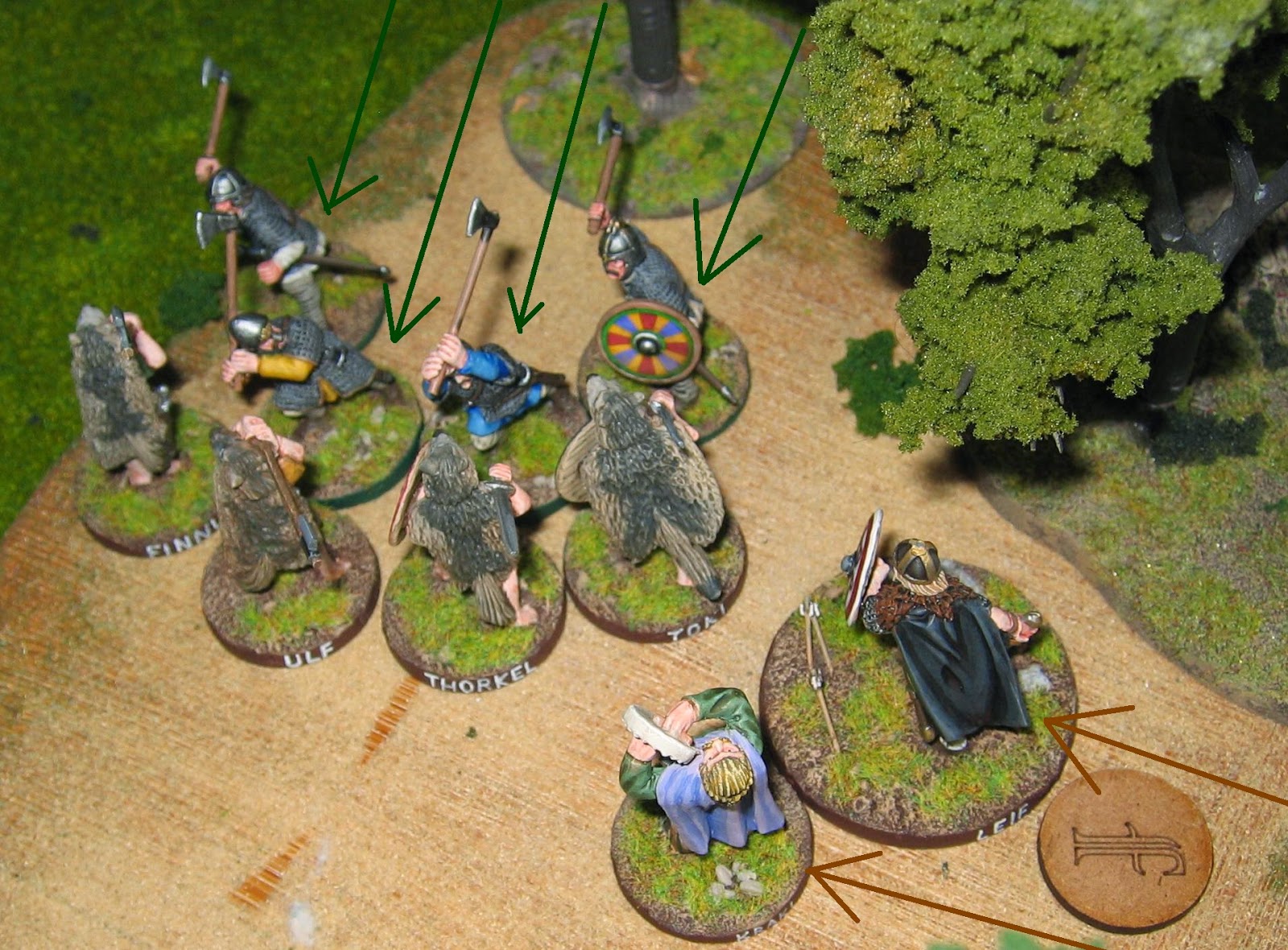 Realising that there were no more Anglo Danes left on this side of the table to challenge the Viking occupation of the hill now, Leif and Kraki moved into Holy Wood to find out how the rest of his band were faring.  He was just in time to see a desperate quartet of Anglo Dane axemen finally pluck up enough courage to challenge the berserkers, who had been alone in the wood (and scoring points for it every turn!) since the start of the game. 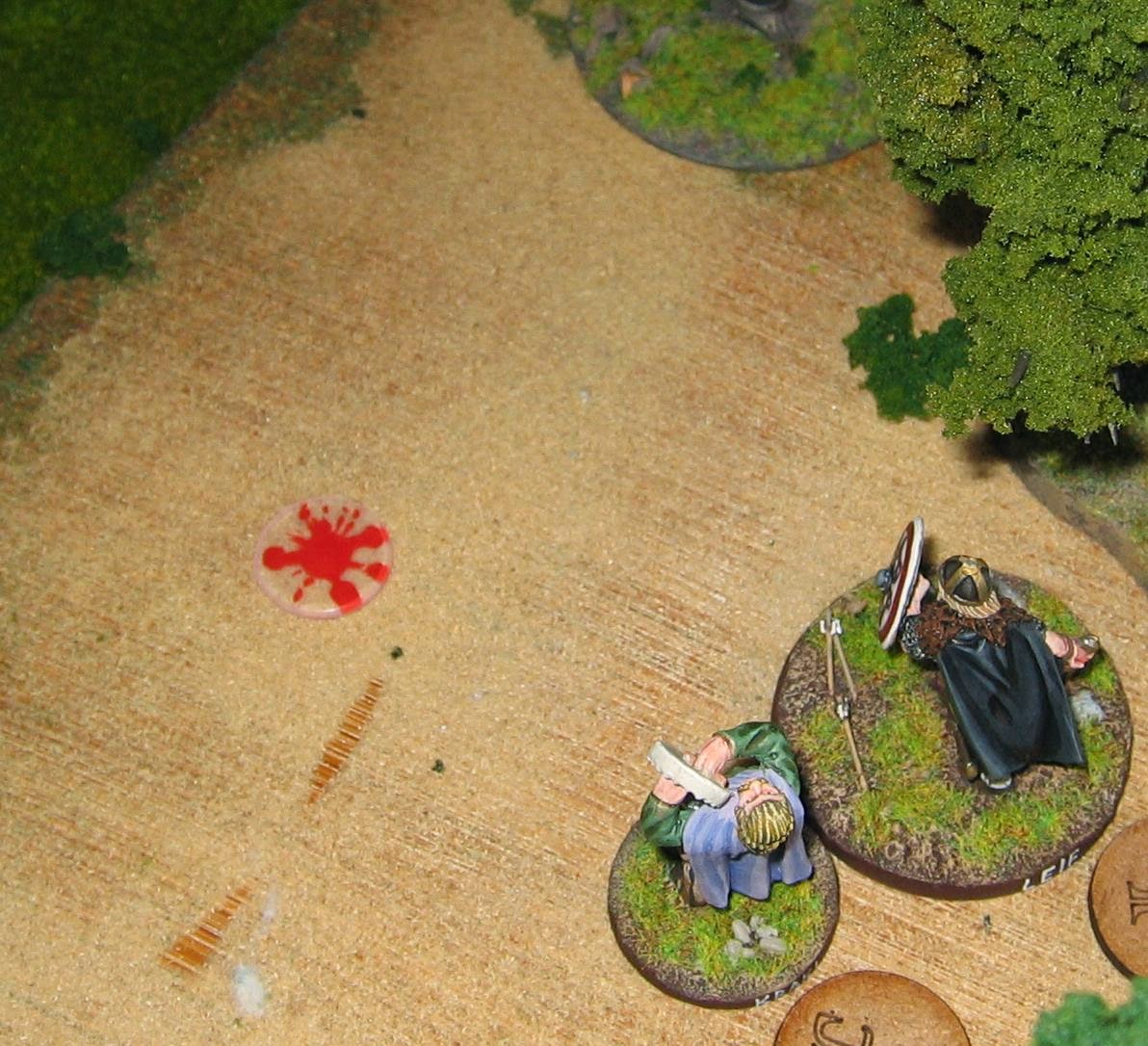 "Wait for me!" he called, but it was too late.  Both sides fell upon one another and annihilated each other in a frenzy of chopped limbs and blood.  There was no chance of any survivors; Kraki was certainly getting plenty of first-hand material for the saga he was creating!

Now at this stage, I (Leif) could just have sat out the rest of the game in Holy Wood.  The Vikings were well ahead on points and there was no realistic chance that the Anglo Danes could catch them.  I would have amassed even more of a points advantage by just staying where I was.  However, that just wasn't  heroic enough... Followed by the faithful Kraki, Leif moved out of the wood and charged at the remaining Anglo Danes.  Thurstan and his boys had spent the second half of the game posturing and chasing off the remnants of the archers and bondi who were near the knoll.  One of the Viking archers actually managed to shoot a huscarl, which is why there were only 3 of them left.  Anyway, Leif caught them by surprise and cut down one of the other huscarls before the Anglo Danes knew what was happening. 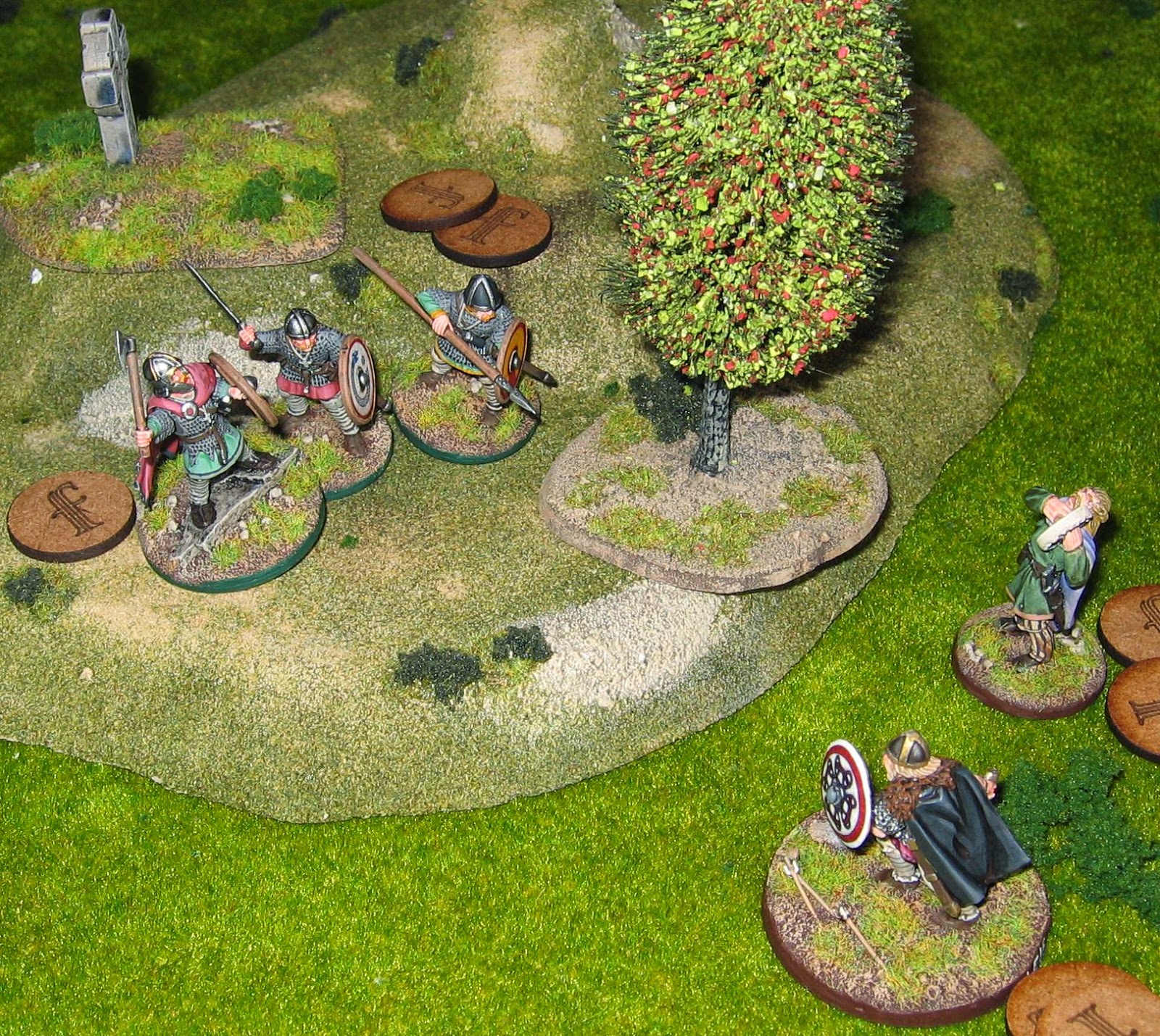 There was a lot of chanting and shouting of insults as Thurstan and the 2 remaining huscarls faced off against the nearby Vikings.  Meanwhile, Kraki sang a rousing battle song to keep his lord's spirits up. 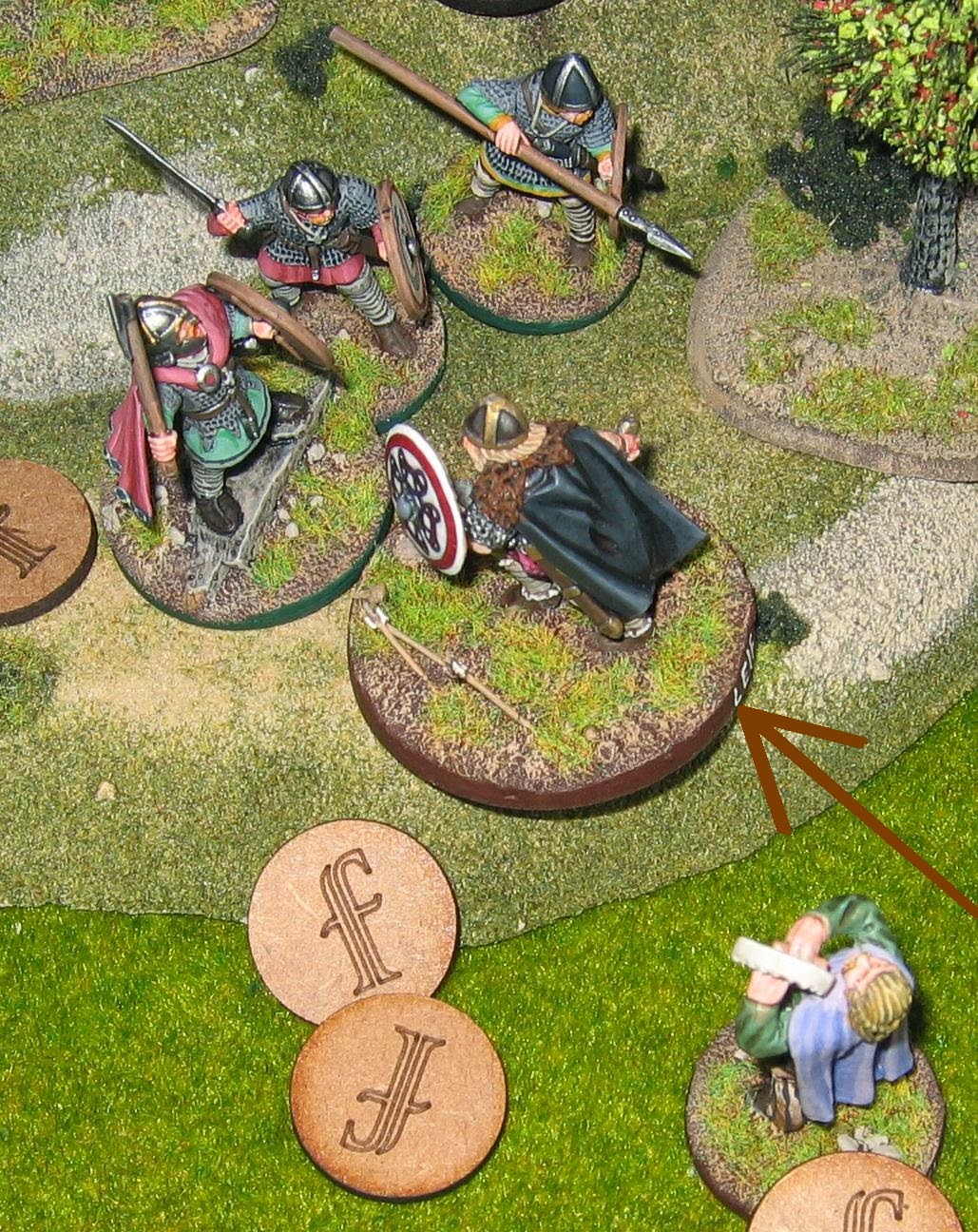 When he felt the moment was right [i.e. the right dice were on the battle board!], Leif charged at Thurstan.  He fought like a wildcat and so fierce was his onslaught that the Anglo Dane warlord was hard pressed.  Leif landed one blow that would have felled a lesser man, but Thurstan's armour preserved him [a warlord can save 1 hit for free in each melee].  2 more blows would have finished the Anglo Dane lord, but his 2 remaining huscarls valiantly leaped in front of the fatal blows and died to protect him.  Thurstan fought back and struck Leif with his axe, making the Viking's helmet ring [free save for Leif].  Finally, both warlords struck each other a death blow simultaneously and collapsed in a tangled mess.

Victory in this game was overwhelmingly with the Vikings, by something like 79 points to 38 (I forget the exact amounts).  One Anglo Dane was left (the lone survivor of the warrior unit which Leif had devastated near Holy Wood), but there were 15 or so Vikings still on the table.  The Anglo Danes suffered greatly, both from starting further away from the objectives and because this was the first time we had used them [i.e. we weren't familiar with their battle board abilities].

During the last fight, I could have chosen to have Kraki, the bard, take the last hit instead of Leif.  This would have left the Viking warlord alive, but there wouldn't have been anyone left to sing about this last exploit.  It seemed more characterful to die gloriously on top of a pile of my enemies!  [Final tally to Leif was 12 Anglo Danes killed personally, out of 25 in their starting force.  Kraki was ecstatic!]

"and that's the saga of Leif Gunnarson at the Holy Wood" finished the aged bard.  Two of the boys were looking up at him with glowing faces, completely rapt.  The third one looked less impressed, though.
"Is something wrong?" Kraki asked, puzzled.  "Didn't you like the story?".
"You mean that you were there, but you never even drew your sword or killed anyone yourself, granddad?" the child replied.  "Huh..."