The battle of Grochow was fought on April 25th, 1809 between the Polish and Austrian armies (at least, according to my "Blunders on the Danube" scenario book).  An Austrian division under Von Mohr had been ferried across the river Vistula to threaten a Polish garrison, but Prince Poniatowski led 3 columns of Poles to contest this bridgehead.

Since I failed to find any corroborating data about this battle in any online source, the scenario book is the only detailed reference I have for the battle.  Indeed, one Wikipedia article mentions the correct date and place for the battle, but claims that it was fought between a different Polish leader and a Russian force!  Were the Russians invading Poland in 1809?  I'm sorry to say that my education has failed to provide much detail on wars in eastern Europe...

Either way, the scenario can be gamed as written even if there is some doubt (in my mind) about its authenticity.  So, what have we got?

In the game, 1 large and 2 smaller columns will attack Grochow.  We didn't have any Polish figures, so we substituted Steve's Russians instead.  This shouldn't make any material difference, as the number and classes of the units were given in "Blunders on the Danube" and we kept to those forces.  The attackers have 6 turns to take the town of Grochow; if they can do this then they win the game.

It'll be a difficult task, though.  The town is heavily garrisoned by Austrian infantry and can only be reached by passing through gaps in impenetrable forest.  There's also a small Austrian detachment in the village of Radzymin; will they be able to threaten the Russians' flanks or rear as the attackers pass by? 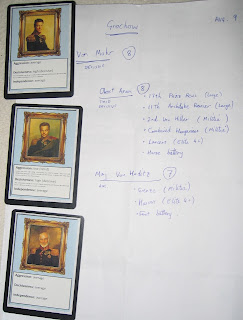 We decided to use my "Black Powder Personality Cards" once again.  The cards for the fairly poor quality Austrian commanders gave 2 of them a high level of decisiveness, though with their otherwise under-average abilities, this might be better termed "arrogance". 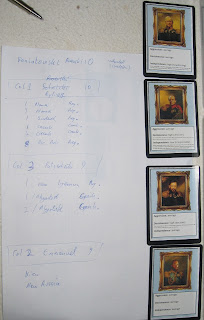 On the other hand, we had some personal difficulties in reconciling the highly skilled Russian leadership with the portraits on the cards!  It did cause a few hesitant laughs, for sure.

So, the numbers of units are about equal, but the Russians are mostly light cavalry with only a few infantry units.  The Austrians are the other way around: mostly infantry with only 2 units of cavalry.  The Russian leadership is much better, but even so, how is a mostly cavalry force going to assault a town?  It's going to be tough... 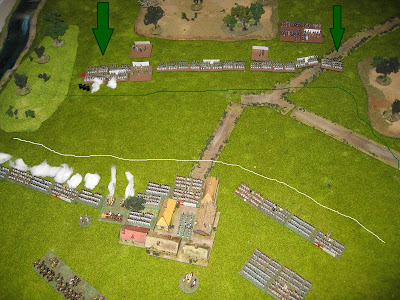 Near the town of Grochow, the Russians advanced rapidly and, with their skilled commanders, deployed easily into an attack formation.  Their plan was (I believe) to knock out the supporting Austrian infantry from both flanks of the town before turning inwards and assaulting the built-up area from 3 sides at once.  In past games of Black Powder, we've found that units in buildings are exceptionally hard to dislodge, so this plan was probably their best hope.  Still, it looked like a pretty tall order... 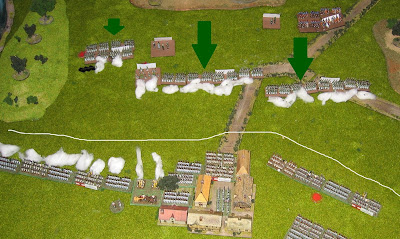 Straight away, one of the Russian attack columns came under heavy fire and was halted, disordered.  Even at this early stage, the assault looked unlikely to achieve its objectives. 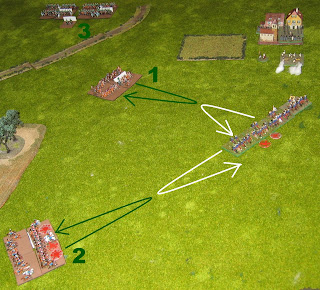 In the sideshow near Radzymin village, a lone Austrian Hussar regiment saw off successive, but uncoordinated, charges from 2 Russian light cavalry units.  Indeed, in the first fight, every hit was saved and so neither regiment took any damage (I guess they just rode past each other, shouting insults). 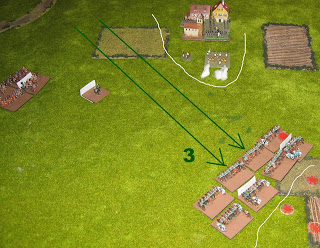 This couldn't go on forever, though.  In the end, the irritated Russians brought up 2 fresh regiments of light dragoons and obliterated the tiring Austrian hussars.  Still, they'd tied up 4 times their own numbers for several turns... 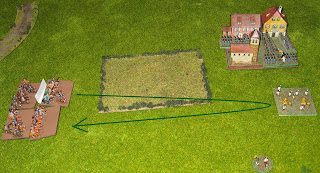 Still trying to prove their worth, the Russian light cavalry regiment who had failed to damage their Austrian counterparts before now saw an opportunity to charge an enemy battery in the flank.  The artillery should have been toast, but once again neither side inflicted any casualties.  We had to look up the rulebook for this one, as it was a situation that none of the players ever imagined would happen.  Our reading was that the cavalry retired and the artillery held their position; no doubt the gunners jeered mercilessly at the backs of the retreating cavalrymen!

Sadly, but not unexpectedly, in the next turn this battery was caught in the other flank by the Russian light dragoons and annihilated. 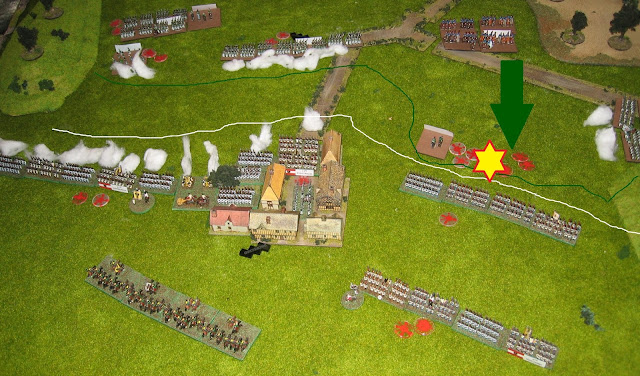 Back at Grochow, the fighting was furious now.  On the defender's left flank, the attack had stalled, but a Russian column managed to charge the militia on the right.  Astonishingly, the raw Austrian troops wiped out their attackers.

In this they may have been helped by a blunder by the Austrian subordinate Oberst Anon.  He had tried to rally the damaged front line of militia, but instead caused them to fall back.  Miraculously, CinC Von Mohr roused himself from his normal inefficiency to order the fresh, reserve unit into position just before the Russians made contact. 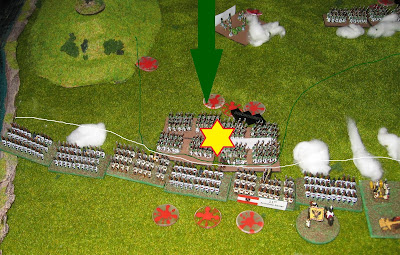 With time running out, the increasingly desperate Russian commanders threw in their other flank attack.  This infantry unit was savaged by musketry as it charged, then fought to destruction by the large unit of Austrian regulars who were facing it.

The next volley from the Austrians also routed the one and only Russian artillery battery.  With no cannons and with only 2 infantry units left, the Russians decided that their chance of taking Grochow was negligible and so they conceded the game.

This is the first time that we've played a historical scenario, even if there is some doubt about who actually fought in the real life battle.  OK, we substituted one of the sides and used Russians instead of Poles, but that wouldn't have made any substantial difference.

As written, I cannot see how the Poles/Russians can possibly take Grochow in this game.  Sure, they have large numbers of light cavalry, but those aren't much use in an urban assault.  The attackers also have very good leadership and the defenders are poor in that respect, but all the Austrians have to do is stand there and get in the way  Their sub-standard generals don't really interfere with that!

"Blunders on the Danube" is a scenario book written for "Field of Battle", but unless those rules operate very differently from Black Powder then it's hard to see what the attackers could do differently.  I commend Steve and A. for trying (and at least they did manage to savage the Austrian detachment at Radzymin), but really I don't think they were going to win this one!
Posted by Colgar6 at 21:35