I had hoped to be able to play some games over the Christmas break, but I've been laid low with what I suspect is a sinus infection.  Always these excuses, I know...

Anyway, I did manage 1 game of Frostgrave a few days ago with my 2 sons, J. and A.  Here's the tale, for your delectation. 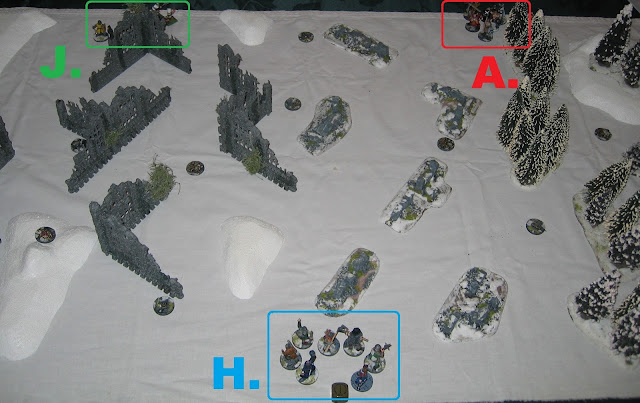 We decided once again to play the "standard" Frostgrave scenario (look for something different in the next game I play!)  Once the terrain was laid out, we placed what seemed like a great many treasure tokens and then chose our starting positions.  I had the advantage of having cast a Reveal Secret spell before the game so I placed an extra treasure token near my position. 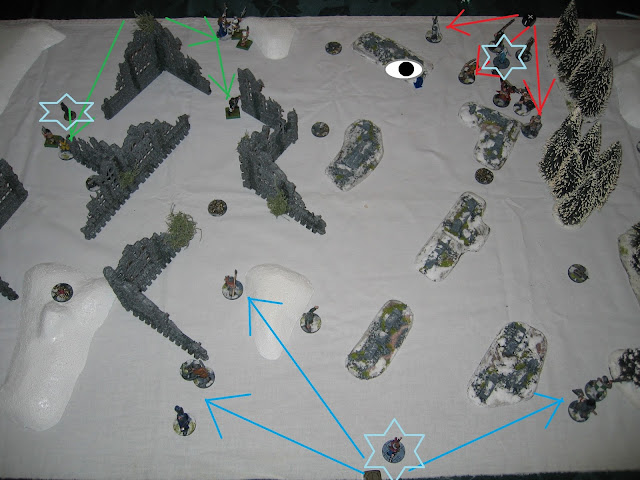 The first turn went predictably enough, with all 3 warbands advancing towards the nearest treasure tokens.  My plan was the same as in the last game we played (here), so Mysterio cast a Wizard Eye on a suitable piece of wall deep in enemy territory.

Oddly, all 3 apprentice wizards fluffed their spell casting in the first turn and were hurt by backfires.

After that, things broke down into a series of small, localised actions.  Here are some of the highlights:

The apprentices on all 3 sides were having a mixed time; sometimes spells were cast successfully, but just as often they backfired and injured the caster. 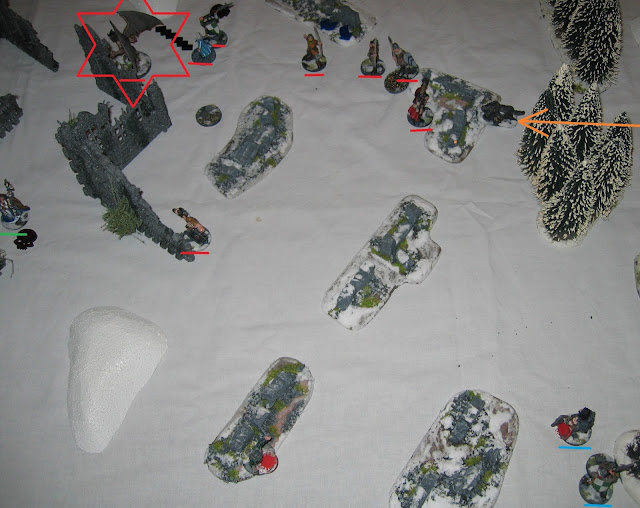 Malcolm Firestorm, A.'s wizard, was having a ball.  He summoned a demon (what, again?  He did this in the last game we played, even though his chances were very low!), then used a scroll to slay one of the wolves.  The other wolf then charged towards him, but was quickly dispatched by an archer. 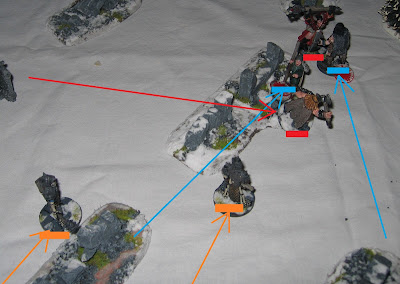 2 armoured skeletons appeared right in the middle of my table edge.  OK, new plan: my soldiers will run screaming straight into the middle of A.'s squad.  With luck, the undead monsters will follow me and make mincemeat of his guys.  What could go wrong? 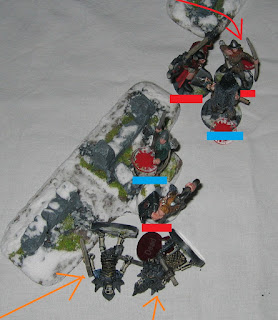 So, A.'s barbarian barely even broke off his fight with my tracker; he destroyed both of the skeletons that attacked him without a second thought.  It turns out that they're not so tough after all... 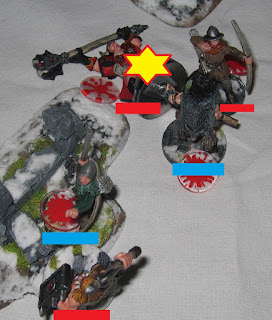 On the positive side, my barbarian ("Crom") really doesn't like wizards.  With one sweep of his huge, double-bladed axe, he felled the enemy wizard, apparently dead.  You can never be sure with wizards, through.

A.'s archer promptly stuck a dagger in Crom's back and killed him, so it wasn't all good... 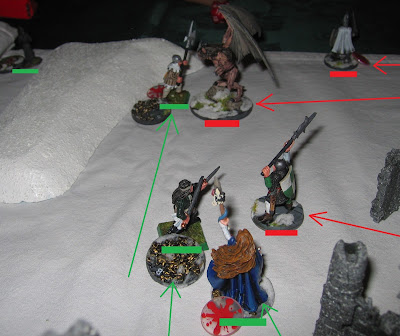 Meanwhile, on the far side of the table, J.'s soldiers were trying to make off with various treasures when A.'s knight, demon and halberdier interfered. 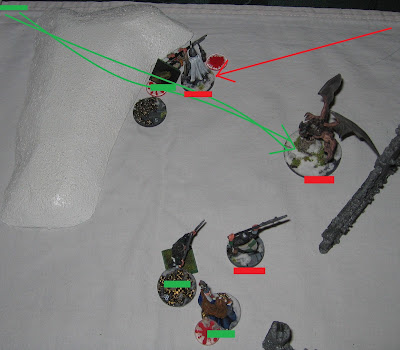 Just before he fled off the table, J.'s apprentice cast a successful Push on the demon and slammed it into a wall.  However, A.'s knight promptly charged and slew J.'s treasure-laden soldier anyway, so it didn't really change anything. 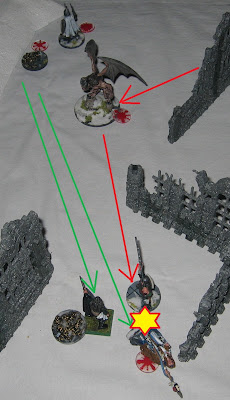 Dismayed and outnumbered, J's remaining people fled deeper into the ruins.  They were pursued enthusiastically and Meyneth the Illusionist fell to a halberd stroke. 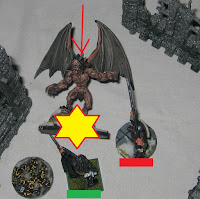 The treasure hunter stood at bay and braced for the demon's attack.  Cleverly, he sidestepped the foul creature's charge and sunk both his weapons into it, thus sending it back to its own plane of existence.  However, his success was short-lived and he was soon surrounded and cut down by A.'s rampaging minions.  Oh, well.

Once again, A.'s warband concentrated on fighting enemies, whilst J. and I tried to pick up treasure instead.  Once again, our heavily-laden, widely-dispersed soldiers were slaughtered one at a time by A.'s larger, better-equipped group.  Bother!

At least we saw some wandering monsters this time, even if they were relatively ineffective.  I suppose they were a distraction for some people, if nothing else.

Magic is fickle!  My wizard spent the entire game trying to cast spells from behind a nice, safe wall, using his Wizard Eye to see what was happening.  He managed to cast just 1 Blinding Light, which was promptly shrugged off by the target, Ellie Icewater.

The apprentices were amusing, in a ham-fisted sort of way.  Little Annie (my apprentice) repeatedly tried to Leap, but failed catastrophically several times in a row.  She's now going to have to pick grit and leaves from her teeth, since she landed face down in the dirt so often.

Ellie (A.'s apprentice) stalked about the centre of the table summoning bolts of magical energy.  Sometimes these would stick to her and burn her hand before she could let go, but on other occasions the bolts were thrown at enemies with considerable effect.  We even invented a new song for her; it goes something like this: "Let it go, Let it go!  Can't hold it back any more!" and so on...

Malcolm Firestorm (A'.s wizard) thought that a Strength spell would allow him to go toe-to-toe with my barbarian.  How wrong was he!