This'll just be a quick posting tonight.  Partly that's because I spent some of today playing my annual Christmas-themed game with my sons.  I've taken lots of pictures, but it will take some time to sort them all out and edit them into a coherent article.  Expect to see that in a few days time.

There is another reason why I haven't made much figure-painting progress in the last few days.  Read on and you'll find out why...

I've just completed yet another old model, ready for Frostgrave.  In this case, the figure is an old Brettonian sorceress from Games Workshop; one of at least 2 such pieces that are in my spares boxes.  I've named her "Melantia", though this isn't written anywhere on the model and could be changed easily. 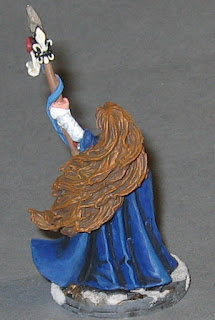 Now, this figure has a great deal of detail on it.  This took quite a while to paint, but that's not really the issue.  No, the real reason why the model has hampered my progress is the problem of interpretation of that detail.

Sometimes, we can see features on a model, but we aren't sure what they represent.  At least, that's true for me!  Is that dangling bit a tress of her hair, or is it a ribbon attached to her belt?  She's resting her right hand on something, but what is it?  A sword hilt?  A potion bottle?  What are the items attached to her staff?  And so on.

It might seem obvious when looking at the painted example above, but the answers to questions such as these were anything but straightforward when I examined the bare metal model.  Working out the answers (or at least, my answers) takes quite a while; I'm hesitant to put paint to figure in case I've got it wrong.  I sit there forever trying to decide what to do without actually doing anything.

Does this ever happen to you?