Another Wednesday and the sinking realisation that I've missed a weekend post yet again!  Honestly, I think that twice weekly updates are too much for me, yet I've got so much that I want to show and discuss.  Real Life (TM) just keeps getting in the way...

OK, a quick post for today.  Here's another Reaper "Bones" monster, based up for Frostgrave.  This one is strange for me because it's a pre-painted model; I usually like to paint figures for myself.  Partly thats because I enjoy the model-making aspect of gaming and partly it's because I can usually make a better job of it than some hastily-coloured, factory-produced figure.  However, this one came pre-painted and I decided that it was a decent enough colour scheme for my needs. 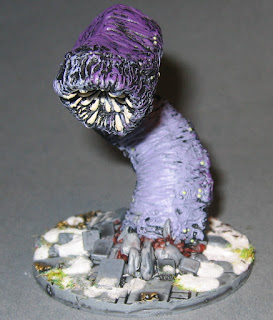 So, what can I tell you about this creature?  Well, it's a pre-painted Reaper Bones model of (I presume) a Dungeons and Dragons "Purple Worm" - one of the baddest boss monsters around!  I've touched up the paint on the worm a little, especially around the teeth, but for the most part what you see is how it came out of the packet.

I created a base for this monster with a 70mm round blank, some Green Stuff and the Basius Dungeon pad.  Once the worm was glued in place, I added a few paving slabs made from offcuts of thick plasticard to make it look as if the creature had burst through the floor.  The effect looks a bit tame to me; perhaps I should have added more loose soil and other debris? 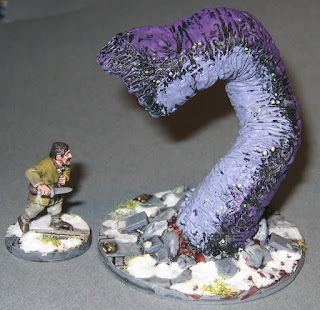 In Frostgrave, the worms were once bred to clean the sewers, but since the city's demise they have gone feral.  They're now a considerable menace to anyone who is unlucky enough to encounter one, as Oscar the Thief is about to find out.  I'm looking forward to seeing this creature appear in a game!
Posted by Colgar6 at 21:27