In our last adventure, Lady Constance (Sir Henry's niece) saved a native fisherman from a terrible misunderstanding.  Now, the tribal elders were giving a feast in honour of the entire Safari, with Sir Henry and Lady Constance as guests of honour.  There was lots of food: spit-roast sucking pig, jungle fruits & boiled starchy roots.  As the night wore on, the village's youths danced and capered wildly, whilst those who fancied their chances competed at wrestling or took turns to beat out rhythms on the big village drums.  Bowls of fermented juice were passed around the audience and many drank deeply.

Just as the senses could take no more, the tribal shaman stood up and waved his arms for silence.  He said a few words in the local tongue that none of the visitors could understand, then approached Sir Henry.  The shaman was holding a deep bowl made of red clay and decorated with white markings; this he offered to the giant, blond European whilst motioning him to drink.  Sir Henry took a cautious sip so as not to offend his host and then his eyes widened with excitement.  "I can see...everything!" he exclaimed, before staggering sideways in a half faint as he dropped the bowl.  It rolled through the crowd, forgotten for the moment as everyone present cheered.

With that, the party broke up and the participants started to move off towards their huts.  Within a few moments, the centre of the village was empty of life.  Well, almost empty.

A large tree grew just outside the settlement's palisade.  One of its branches stretched over the wall and over the village and from here Tarzan had observed everything.  Sir Henry and his safari were rivals rather than mortal enemies, but still the jungle lord had known he wouldn't be welcome at the party.

Now that the villagers had dispersed, he let himself down from the tree noiselessly and crept like a shadow towards the still-glowing embers of the central fire.  He found the red bowl where his sharp eyes had seen it come to rest and sniffed at it once.  Curiously, he dipped his finger into the remaining contents and licked it experimentally.  A look of astonishment crossed Tarzan's face.  Clutching the bowl, he retreated back the way he had come.  Once in the safety of the jungle and some distance away from the village, he wedged himself in a forked branch and scraped out the remainder of the bowl's contents, before falling into a deep, dream-laden sleep. 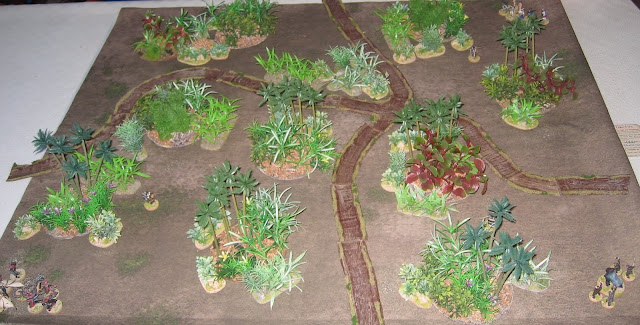 For the 6th game in our Perilous Island campaign, I chose the "Jungle Trails" scenario.  We were newly arrived on the island itself and now our leagues would push through the jungle towards the larger settlements in the interior.  The only trouble is that the jungle is full of troublesome natives...

As usual, we had 3 leagues: 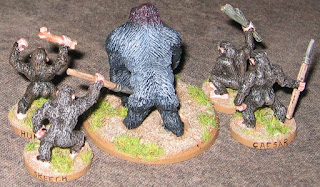 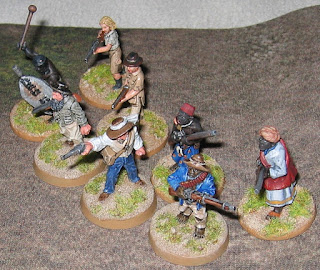 The Snake Cult of Al Masoudi 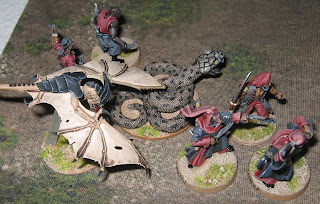 There are several native youths flitting about the jungle.  They are there as part of some manhood ceremony and so are not particularly aggressive.  However, they will gain a lot of standing amongst their peers if they can taunt the strangers and not get caught.  The leagues have to try to quiz these natives and thereby discover clues as to the whereabouts of the missing Darrow expedition. 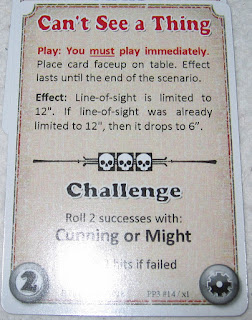 Almost immediately, someone drew [and had to play] a "Can't See a Thing" card.  Thick clouds rolled overhead, casting the already-shadowy jungle into deep gloom.  It would be quite a feat to even find the native youths - or the other leagues - let alone achieve any objectives.

Another "play immediately" card increased the number of cards that everyone drew each turn.  With this and the other enhancements, there were a very large number of cards in play for the entire game. 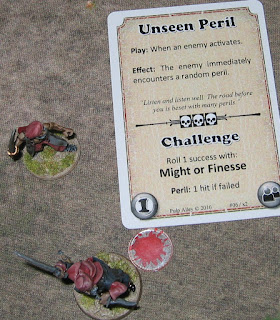 As the players had plenty of cards, they didn't hold back on using them!  One of Al Masoudi's cultists fell to an unseen jungle hazard... 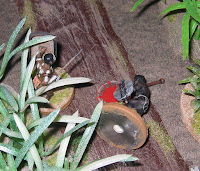 ...whilst Sir Henry's native brawler tried to catch one of the youths and failed miserably. 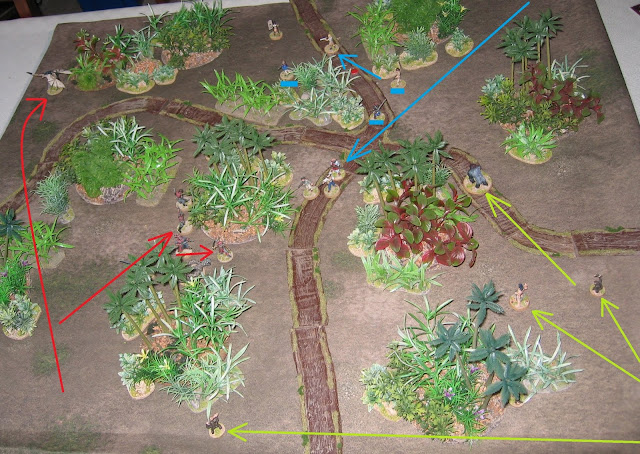 After a couple of turns with 6" visibility and thick clumps of jungle, nobody had even seen anyone else, let alone started any fights. 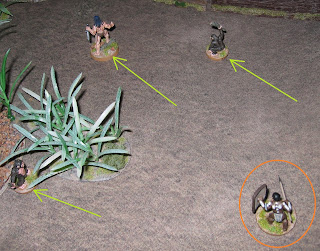 One of the natives popped up behind Tarzan.  This was easily within striking distance and Tarzan generally solves objectives easily; it seemed too good to be true... 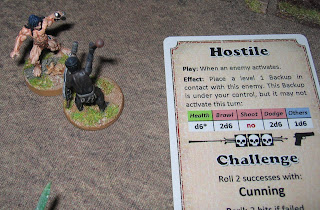 ...and it was!  Out of the darkness Sir Henry's friend, the wrestler, leaped on Tarzan.  The jungle lord threw his assailant aside contemptuously, but even in those few seconds the native [objective] was gone. 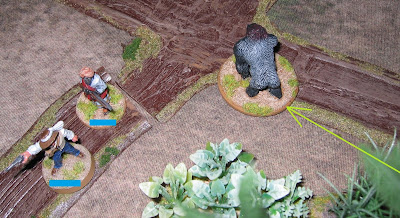 Koko [the gorilla] ran to the crossroads in the centre of the table and roared!  It was very gratifying to see several of the lesser members of the Safari scatter and run away, but the beast soon regretted his impetuous action as both Sir Henry and Alan Quartermain then shot him, many times.  Koko decided to lie down in the dust and wait for tomorrow - perhaps it would be a better day than this one had been? 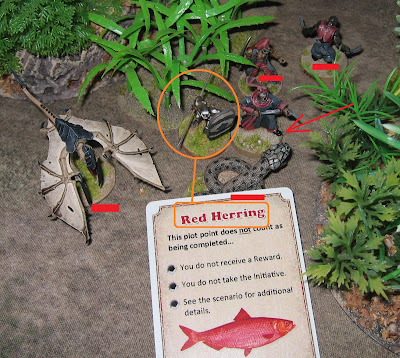 The Cult had the next opportunity to challenge one of the natives.  They had surrounded the youth and he had no way to escape, or so they thought.  But when Al Masoudi stepped forward to challenge him, the lad was lifted up into the treetops with the help of a rope lowered by his friends.  The natives uttered a few mocking calls before vanishing along a well-prepared escape route. 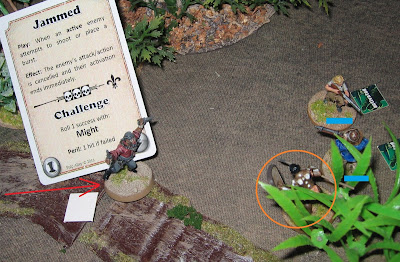 Elsewhere in the jungle, the cult's fanatic saw Lady Constance trying to talk to one of the native youths.  Seeing an excellent target, the cultist ran forward and reached for the grenade which should have been hanging from his belt - but it wasn't there.  He must have dropped it somewhere along the trail... 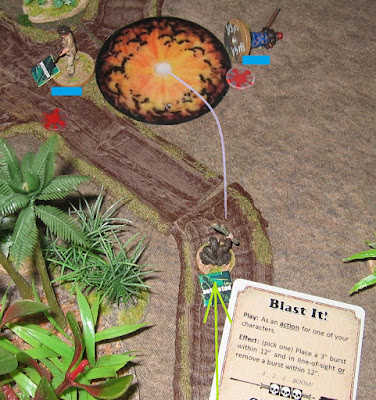 ...or else it had been stolen by a monkey.  Kobo couldn't move very fast because of the wheezing from his fungus lung infection, but he did have a grenade.  He tossed the bomb towards the Safari; one ascari was knocked out, though Sir Henry narrowly avoided being hurt by jumping aside at the last minute. 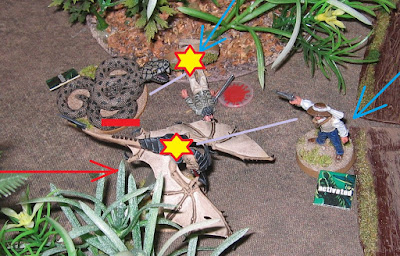 Do you remember that Captain Goode ran away from Koko's [the gorilla's] intense roar at the crossroads?  In his panic, he crashed through a dense thicket and came face-to-face with the cult's giant snake, Taguerjah.  Captain Goode had little chance against the monster and was promptly flattened, though the serpent was prevented from devouring him by the sudden appearance of Alan Quartermain.

The cult thought that they had the renowned hunter outnumbered when their other beastie flew in swiftly, but Alan immediately shot this second critter dead.  One-against-one, then... 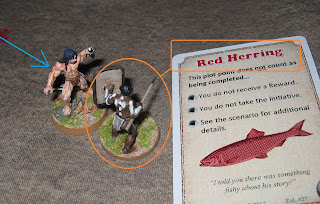 Elsewhere, one of the other objectives/natives wandered close to Tarzan.  He grabbed for the lad, but even the jungle lord wasn't quick enough as the boy slipped through his grasp and vanished into the gloomy undergrowth. 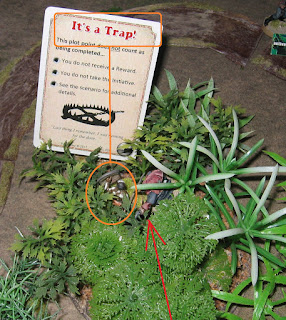 This wasn't as bad as what happened to Al Masoudi, though.  The frustrated cult leader thrashed his way through some of the densest jungle ever seen, hot on the trail of one of the natives, only to discover that he was thoroughly entangled in thorny branches and held fast.  This was most undignified [though the other players did laugh quite a lot at his predicament, I confess]. 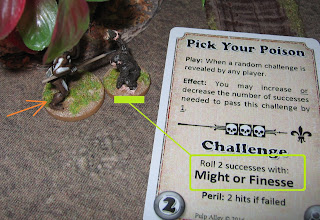 Kobo/"wheezy" had much better luck.  One of the young natives wandered right up to him and obviously felt sorry for the sick simian.  The lad's curiosity was his undoing though, as even when ill the ape had a grip like iron.  Kobo grasped the boy's outstretched hand and wouldn't let go [so that's 1 objective claimed for the Jungle Alliance]. 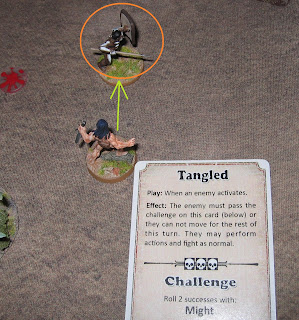 Next it was Tarzan's turn to get lucky.  Another of the natives moved very close to where he was lying in wait.  Tarzan struck!  He ambushed the native and subdued him with ease.  Even the vine that caught at his foot [courtesy of an event card played by Sir Henry] didn't slow him down; Tarzan broke through the offending vegetation with ease [so that's now 2 victory points/objectives held by the Jungle Alliance and none by anyone else]. 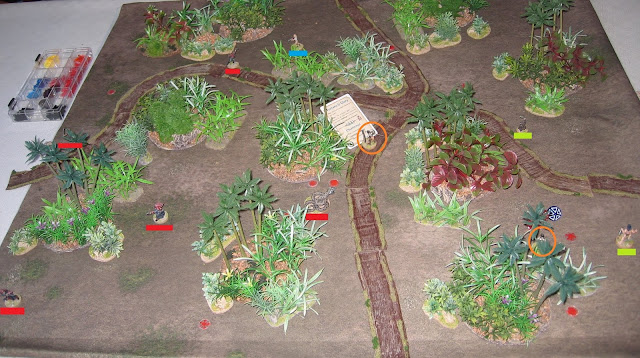 Towards the end of the game, the situation was this: 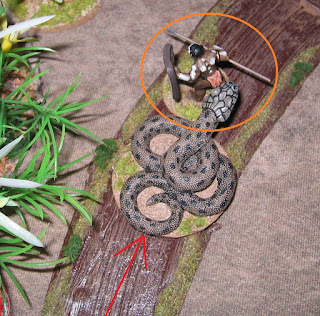 In the dying moments of the game, Taguerjah the snake glided along the path and surprised one of the natives.  The poor man didn't stand a chance; he was quickly subdued and taken away to be interrogated to the cult leader and his hypnotic powers [finally, 1 objective claimed by the Cult]. 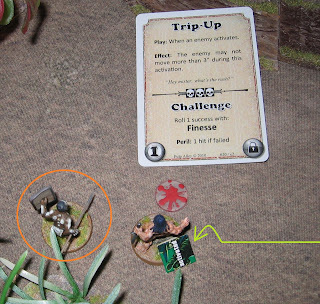 Last of all, yet another native came close to where Tarzan lay in wait [it's almost as if Tarzan had worked out the natives' code of bird calls and had positioned himself to intercept the young man.  The natives/objectives just kept approaching without him having to move from his position].  This time however, Tarzan failed to claim another prize.  An event card played by Sir Henry caused the jungle lord to trip up as he sprang his ambush; by the time he had recovered his poise the native was nowhere to be seen.

In terms of claiming objectives, this game was a disaster!  Tarzan scored 2 points, the Cult scored 1 and poor Sir Henry had 0.  Given that the jungle was dense, incredibly dark and that there were a lot of hostile event cards flying about, it's hardly surprising, I suppose.

But that's perhaps missing the point.  It was an incredibly exciting and characterful game, right from the start where Sir Henry and Al Masoudi mocked Kobo the fungus-lung infected simian by calling him "wheezy".  Well, who's laughing now; Kobo used a grenade to blow up one of the Safari's ascaris and then claimed an objective all on his own, thus winning the game [or at least, contributing to Tarzan's win]!

Biggest disappointment: either the Cult's flying creature or Koko the gorilla: both met ignominious ends without achieving much [though at least Koko did scare some enemies].

Most successful: I'd say either Taguerjah, the Cult's unstoppable snake [who felled Captain Goode & Alan Quartermain and then claimed an objective] or Kobo the simian [who performed well above the level expected by a mere level-1 Follower character].

All in all, it was another exciting and thrilling game of Pulp Alley.  I can hardly wait for the next episode!

Onwards into the swamp ==>