Would you believe that I have been participating in Zomtober for 9 years now?  At least, this is the 9th year in which I will have put up such a series of posts.  Indeed, I'm not even sure that anyone else is participating in this event any more.  Still, it gives me a sense of purpose and I enjoy these articles.

The Zomtober format is simple: publish a picture of at least one recently-painted zombie or survivor model every Sunday in October.  Just to show that you are making progress in painting all those miniatures which would otherwise be unloved and neglected. 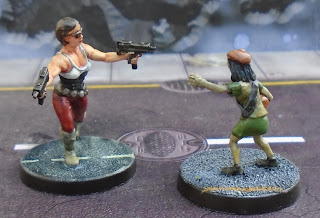 To make it a bit more exciting, my own usual format for a Zomtober article is to present a duel between one survivor and one zombie.  The reader's task is to decide "what happens next?"

This week, we have a face-off between "Martha" and an unfortunate Girl Guide zombie (hereafter "GGZ").  [I am not sure, but what we call Girl Guides in the UK may be known as Girl Scouts in the USA?] 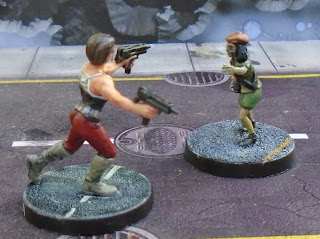 Martha is heavily armed; she is wielding a machine pistol in each hand.  She also appears to be shooting sideways whilst running past GGZ. 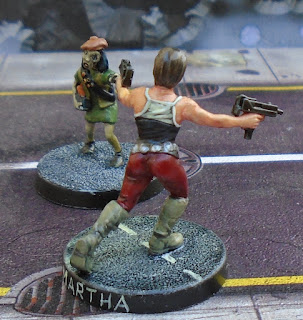 It may be easier to see in some of the pictures than others, but GGZ is holding a couple of boxes of what I assume are cookies (because Girl Scouts are associated with selling cookies in the USA, right?) 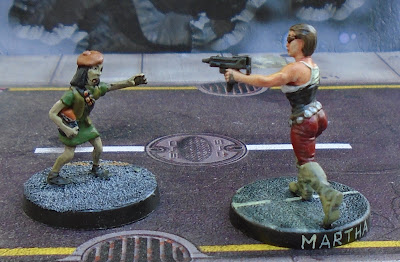 Both models are based using my simple "sand and drybrush" technique.  In each case, I've added a hint of road markings to the tarmac, to break up the monotony.  I suppose I could have used some litter, autumn leaves or something like an oil stain for the same purpose - but road markings are cheap and easy to paint. 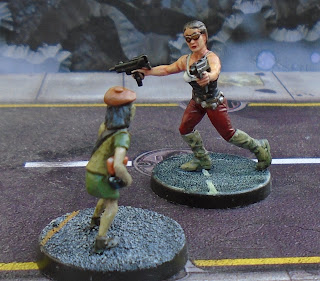 Martha is a plastic model, made up from the old Wargames Factory "Apocalypse Survivors: The Women" kit.  I'm not sure how she is dressed, as the moulding on the model isn't entirely obvious.  However, I've interpreted her clothing as a white vest and some kind of black corset, with a loose, chunky belt around her waist.  It seems like a slightly odd outfit in which to survive the apocalypse, but I suppose that it works for her? 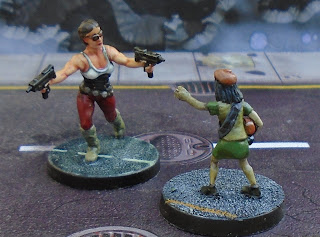 GGZ is a metal model, one of a set still available from Dragon Bait Miniatures.  Mind you, I'm fairly certain that I didn't buy my packet from them, so I think the figures must have been distributed more widely at some point; I've had these models (unpainted) for quite some time.  Expect to see more from the same set later in Zomtober 2021!

So, what happens next?

My own view is that Martha won't manage to shoot GGZ because she is firing whilst running - and shooting off to her side at that!  I cannot imagine that her aim is any good under these conditions.  In addition, she seems to be mistaking the height of her opponent and is probably going to fire high.

On the other hand, GGZ doesn't look especially strong or fast.  I suspect that Martha can just keep running and be past the zombie without much risk.

But why is Martha pointing her other gun as well?  And why is she running in the first place?  Is there some other threat just out of the picture, either to Martha's other side or behind her - or both?  Is GGZ merely one obstacle of many between Martha and safety?