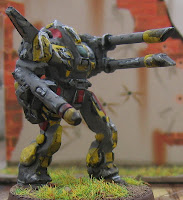 Long ago, I got myself a Combat Zone boxed set from EM-4.  This is still the cheapest 28mm all-in-one miniatures game I know, bar none.  It contains 30 miniatures (15 gangers, 10 troopers and 5 robots), rules, dice and scenery for just over £15, plus P&P.  Eat your heart out, Games Workshop!

Since then, my collection of gangers from various sources has grown considerably, but I still look fondly on the Combat Zone plastics.  I decided that at the Games Club this week I would play a gang-vs-gang game in homage to them.

Now, I could have just used the Combat Zone rules for this.  They're somewhat old school, but still give a decent game.  However, it's been quite a while since I last played them and I couldn't actually remember all the details.  Rather than re-read it, I decided to play the game using 5150 rules instead (note that I have the older 5150, not the updated offerings with the same name from 2Hour Wargames).

Creating stats for the 2 gangs was easy enough, especially as I didn't give the members any attributes (at 12 humans on each side, I was concerned that such detail would be forgotten in the heat of the action).  In addition, I wanted to give each gang a mech, or large bipedal robot - this is obviously a somewhat futuristic scenario.

There are no rules for robots in the 5150 rulebook that I have (especially for 8 foot tall autonomous killing machines), so this looked a bit awkward.  However, the Infestation supplement for 5150 does have rules for a similar machine.  I looked at this and decided that the Infestation 'bot seemed a bit too tough for my liking.  Also, if I've understood those rules correctly, you have a better chance of damaging it with a shot that doesn't penetrate than with one which does.

To cut a long story short, I used Infestation as inspiration for my own robot damage tables and capabilities.  In particular, I softened their resistance to bullets a bit; these 'bots should be tough, but not invincible.  Even moderate small arms fire (better than a .22 pistol, that is) has a small chance of bringing one down - though dedicated anti-tank weapons are much better! 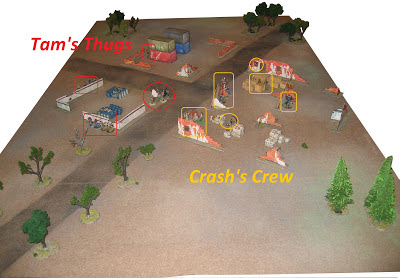 So, here's the story: 2 gang leaders ("Big Tam" and "Crash Hodgkins") have agreed to meet at a ruined warehouse to discuss their respective spheres on influence.  In theory, both chiefs are supposed to come unarmed and bring no more than 3 henchmen, but each has a number of thugs hidden close by as backup.  And a robot. 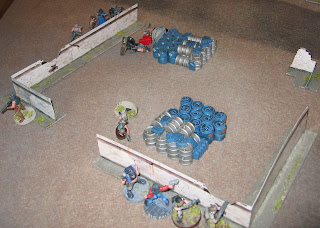 Big Tam swore at the man standing on the other side of the road.  "We ain't doing business like this, you jerk!  You were supposed to be unarmed!"  Irony was completely lost on the big man; his people were not even attempting to conceal their own guns.  The group started to walk away from the rendezvous, back to the ruined compound where the rest of Tam's gang was hidden.
On the other side of the road, Crash gave a slight nod to his henchmen.  The range was too long for pistols, but Boxer and Casper raised their assault rifles and let rip.  Stunned by the treachery, Pinky went down, bleeding, others in the group dived for cover behind stacks of barrels and the cowardly Smiley ran off into the dawn.

With his leader pinned down, Buck provided covering fire from a corner while Porkchop and Big Paulie ran across the road to outflank the other gang.  Despite his bulk, Porkchop made it all the way, but Big Paulie wasn't as fast; she was picked off by Crash's snipers.

Porkchop's machine pistol made short work of the closest opposition, thus clearing the way for Clarice (and her flamethrower) to follow him over the road.

Just as this flanking movement was about to produce some real results, there were flurries of movement on the roads.  Police cars appeared from both ends of the main road and disgorged a number of blue-clad officers.  And a 'bot. 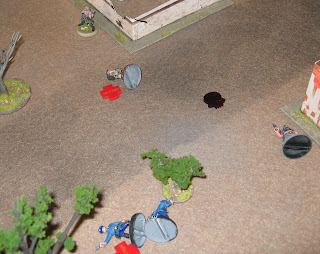 At the south end, all hell broke loose.  Buck fled, leaving his underlings in the lurch.  Porkchop went down, while 2 officers approached Clarice from behind and attempted to arrest her.  She heard them coming and ran back across the road, only to be cut down by a long range shot from Boxer.  Goofy came round the concrete wall and shot the 2 arresting officers.  Lestrade, the police detective, was obliterated by the Street Tiger II 'bot (don't stand still, in the open, in clear sight of a heavily-armed death machine).  The other 2 officers exchanged fire with Pony and Goofy, but came off worse.  This left just the police dog, Bandit, at the southern end of the board. 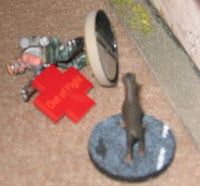 Bandit wasn't put off at all by the loss of all his comrades.  He charged at Goofy, who fired at the approaching dog and missed.  In true police-dog fashion, Bandit quickly disabled the ganger before turning to charge at Pony.  The second ganger didn't wait for the dog's attack, though - he turned and ran for his life! 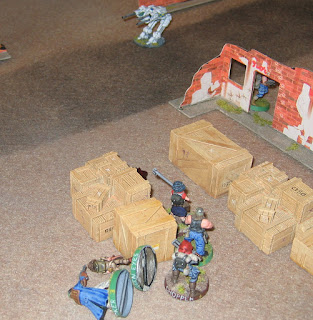 In the north, the police 'bot "Robocop" stomped straight down the road as fast as it could.  Sally waited patiently, carefully aiming her recoilless (anti-tank) rifle at the road.  As the robot appeared past the wall, she pulled the trigger.  The shell bounced off the 'bot, disorienting it.  Its upper torso swiveled round like lightning.

"DROP THE WEAPON, CITIZEN" blared out from the 'bot's speakers.  "FAILURE TO COMPLY WILL BE MET WITH DEADLY FORCE!  YOU HAVE 5 SECONDS: 5..6..7..2..1".  Without giving the woman a chance to respond, the machine opened fire with its own autocannon and recoiless rifle.  When the smoke and dust had cleared most of her friends had ducked for any cover they could find, but miraculously none of the gang was hurt. 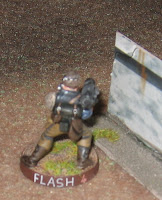 On the other side of the road, Flash peered round the end of the concrete wall.  "Suck on this, pig-bot!" he screamed, as he aimed his rocket launcher at Robocop. 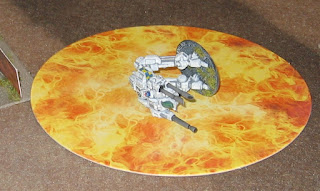 The missile flew true and hit the 'bot squarely on the torso.  Robocop disintegrated in a violent explosion! 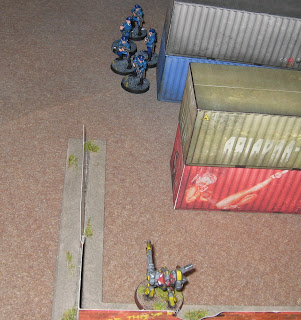 The police officers at the northern end huddled together in the cover of a stack of freight containers.  "There's something round the corner.  We all go together, on my mark...GO" ordered their leader, Callahan.  There was indeed something: Avenger 500 stood patiently, watching the yard for any sign of movement.  The 'bot opened fire immediately, dropping one of the cops and forcing the others to crawl back round the corner, out of sight. 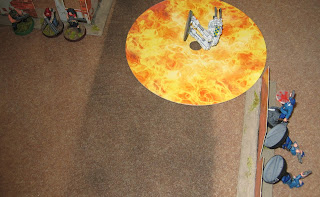 Callahan's patrol crawled across the yard, away from the stationary 'bot.  Instead, they stood up and looked over a wall towards the other gang's location.  Immediately, Chopper and Damage opened fire with automatic weapons.  Only the police star, Callahan, was left standing after the massive volley.  He fired 2 quick shots, both of which hit Chopper in the head and killed him, before himself ducking back. 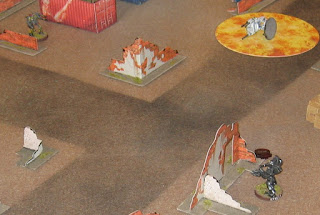 Most of the remaining gang members had slunk away by now.  In the final drama of the game, Street Tiger II advanced and came into sight of Avenger 500.  Both 'bots exchanged a lot of fire, though in the end Street Tiger II suffered a power loss and shut down temporarily.  Before we could work out whether it would recover, we had to pack up.  This is yet another of my games where you'll just have to work out what might happen next for yourself!

My 'bot rules worked reasonably well, I think.  I sometimes forgot that they should take "to hit" penalties if they fired both weapons at once; this would have reined them in a bit more.  A bad mistake was the rule on movement: either move in a straight line or turn up to 90 degrees.  That made them very sluggish; it would have been better to allow them to move and turn in the same activation.  I'd still keep the straight-line movement and the maximum turn of 90 degrees, though.

In 5150, it's virtually impossible to break cover against a foe with a heavier weapon, it seems.  I hadn't appreciated just how limiting this might be and although I thought I'd provided plenty of cover, it seems that there were enough automatic weapons to cover almost all the gaps.  It's just as well I played this scenario with (mostly pistol-armed) gangers rather than with military types, mind!