Japanese Spaceships and Request for Help

A few weeks ago, I showed you my progress so far on fighters for the new 5150: Fighter Command ruleset.  That's fine as far as it goes, but I need some capital ships as well.  I've seen Bandai's "Space Battleship Yamato" [aka "Star Blazers"] series of plastic kits widely recommended for this role; HobbyLink Japan seems to be the most popular source for these.  I'm not a great fan of the styling of spaceships in Japanese anime, but I thought I should take a closer look to see why the Bandai kits are so popular. 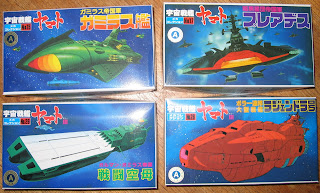 I quickly discovered that many (not all!) of the Space Battleship kits are a mere 180yen each.  That's about £1.20 (UK) or $1.80 (USA).  This seems too good to be true, but there are 2 other factors which affect international purchases a lot: postage rates and time-to-deliver.

I put together an order of 4 kits on the HobbyLink Japan site; the postage came to 680yen, or about as much again as the kits themselves.  That's not too bad; I figured that I could afford to take a chance for a little over £9.

So what about delivery time?  Well, I had a shipping confirmation notice 2 days after payment was made and a carton containing a Japanese customs label and other markings arrived some 6 days later than this.  I'd say that 8 days from start to finish was quite acceptable for goods from the other side of the world!

What's in the Boxes? 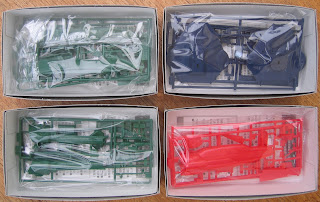 Each box contained 2 or 3 sprues of parts, coloured to match the predominant colour of the picture on the box (apart from the blue one?!).  What was more of a surprise is that 3 of the 4 kits also contained the parts for a second, much smaller spacecraft.  This wasn't at all obvious from the packaging or the online kit descriptions and came as a very pleasant surprise.  Instead of buying 4 models, I'd actually obtained 7!

Each kit was very easy to build; the parts fitted together well and there weren't huge numbers of them.  Because these will be used as gaming models, I left off some of the more fragile-looking protruding aerials and pylons.  I suspect that they would all have been broken the first time I transported these ships!

I also left off a few of the turrets, some of which I felt had very improbable locations (blocked by parts of the superstructure &c, with virtually no field of fire).  For the turrets that I did use, I cut down the gun barrels considerably; the Japanese style has excessively long, thin weapons for my taste. 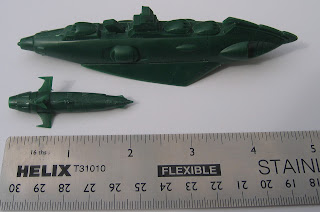 I'm not sure of the original names or types of these vessels in the Space Battleship Yamato series, so I'll just refer to them by the kit numbers instead.  This is #15; it includes a large warship and a smaller vessel.  The big ship will probably end up as an alien capital ship in 5150.  The smaller craft looks somewhat like a submarine; I'm not certain what I'll do with that. 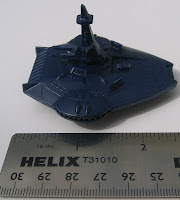 This one is kit #17.  It's a bit unusual: most of the Space Battleship models are long and thin, with more than a passing resemblance to World War 2 Japanese naval vessels.  However this ship is flat and wide, almost like a saucer, though it does still have the tall, multi-layer conning tower. 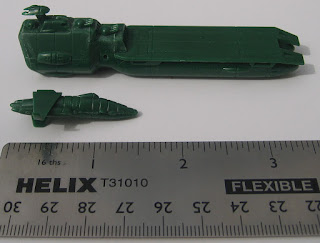 Model #26 is probably my least favourite.  It's undoubtedly a carrier, but behind the flight deck and narrowed waist is a somewhat boxy structure.  The smaller ship included in this kit is also rather ugly and not really to my taste.  It might be used as a civilian vessel or priority transport in Fighter Command, as it's clearly got a cockpit and is therefore a very different scale from its "mother ship". 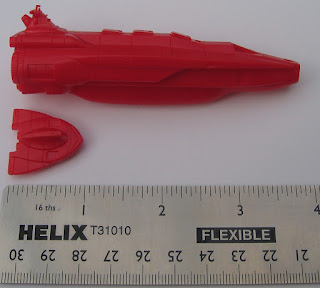 Finally, we have #28.  I think this is the model that I like most from among the sets I bought.  It could play the part of a capital ship in Fighter Command, or perhaps it'll end up as a bulk carrier for my Full Thrust merchant fleet.  The smaller ship is probably destined for Fighter Command, maybe as an alien civilian vessel.

I will certainly paint up some of these models and use them in my games, though probably not in the "official" colour schemes as shown on the boxes.  The others?  I'm not so sure - there are enough competing demands on my time that the ships I like least will be some way down the workload queue.  Still, it was a fun experiment and hasn't cost a great deal of money or time so far.

A Request for Help 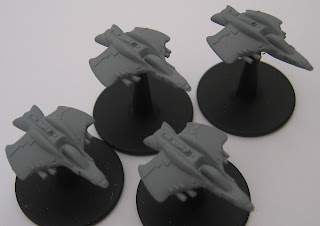 I've just started on the smaller fighters for my 3rd faction in 5150: Fighter Command.  However, I'm completely undecided on the colour scheme for this group.  Please, give me your thoughts and maybe I'll paint them up using your suggestion.  Here are some concepts that I've considered so far:
I look forward to hearing your ideas :-) .