There has been a tournament held on a grassy plain on the outskirts of Nottingham.  People have travelled from far and wide to attend; there are a lot of strangers around today.  As the afternoon draws to a close and the crowds start to disperse, someone shouts out "There's Robin Hood, the outlaw!  Seize him!".  Is it really Robin and the Merry Men?  Or is it just a case of mistaken identity?

The game will be played with the Song of Blades and Heroes rules; the outlaws have to escape back to the forest.

Robin and the Merry Men 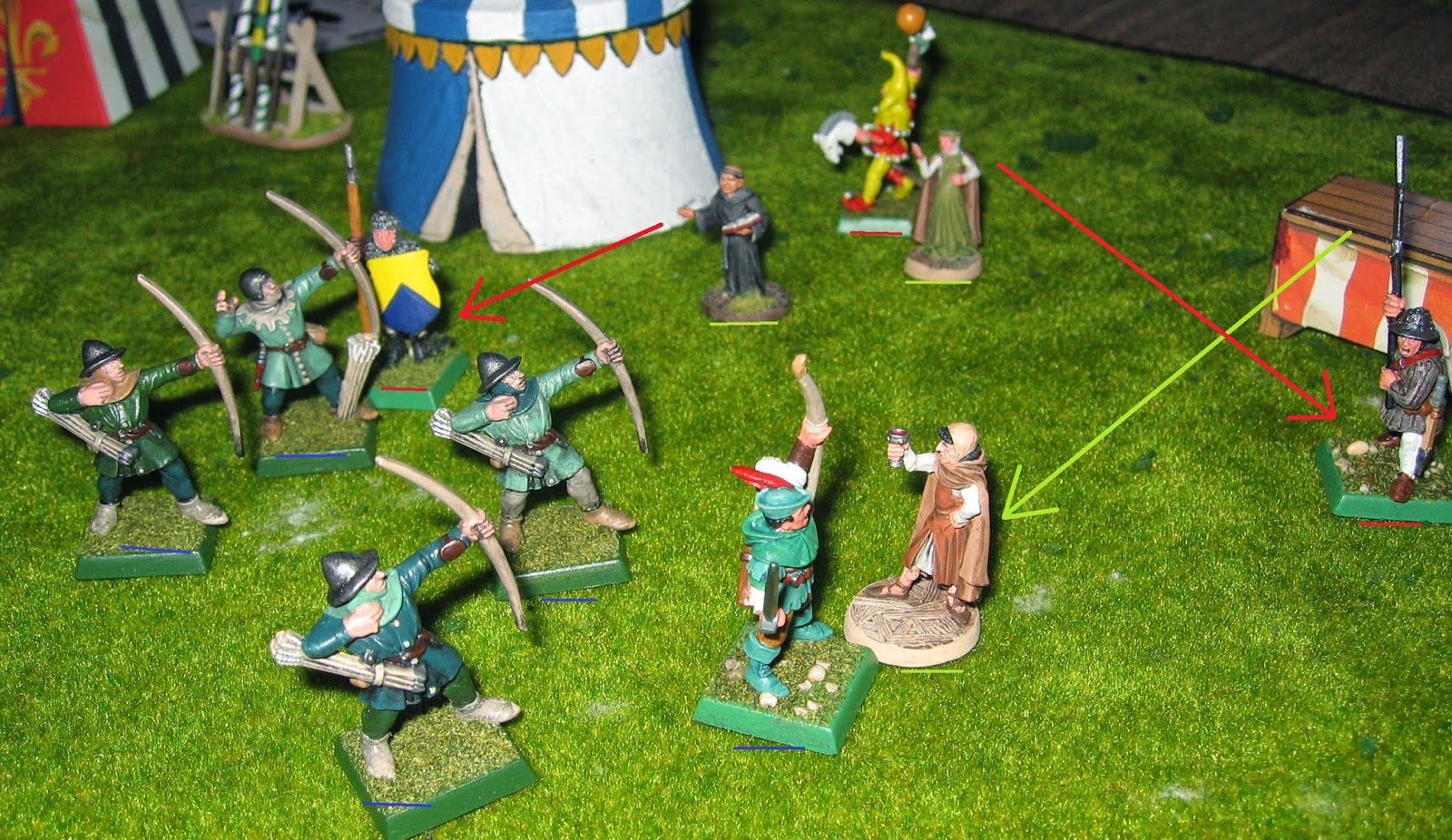 The Sheriff's men moved first; a couple of men-at-arms moved forward hesitantly.  Neither was particularly keen to tackle the notorious outlaw band on his own, so both were waiting for backup.

However, a drunken civilian was much more forward.  He stumbled down from the stands and staggered over to the Merry Men.  "Well, if it ishn't my old friend, Robin Hood" he slurred.  "Hey look, everybody!  It's Robin Hood, my best pal!" 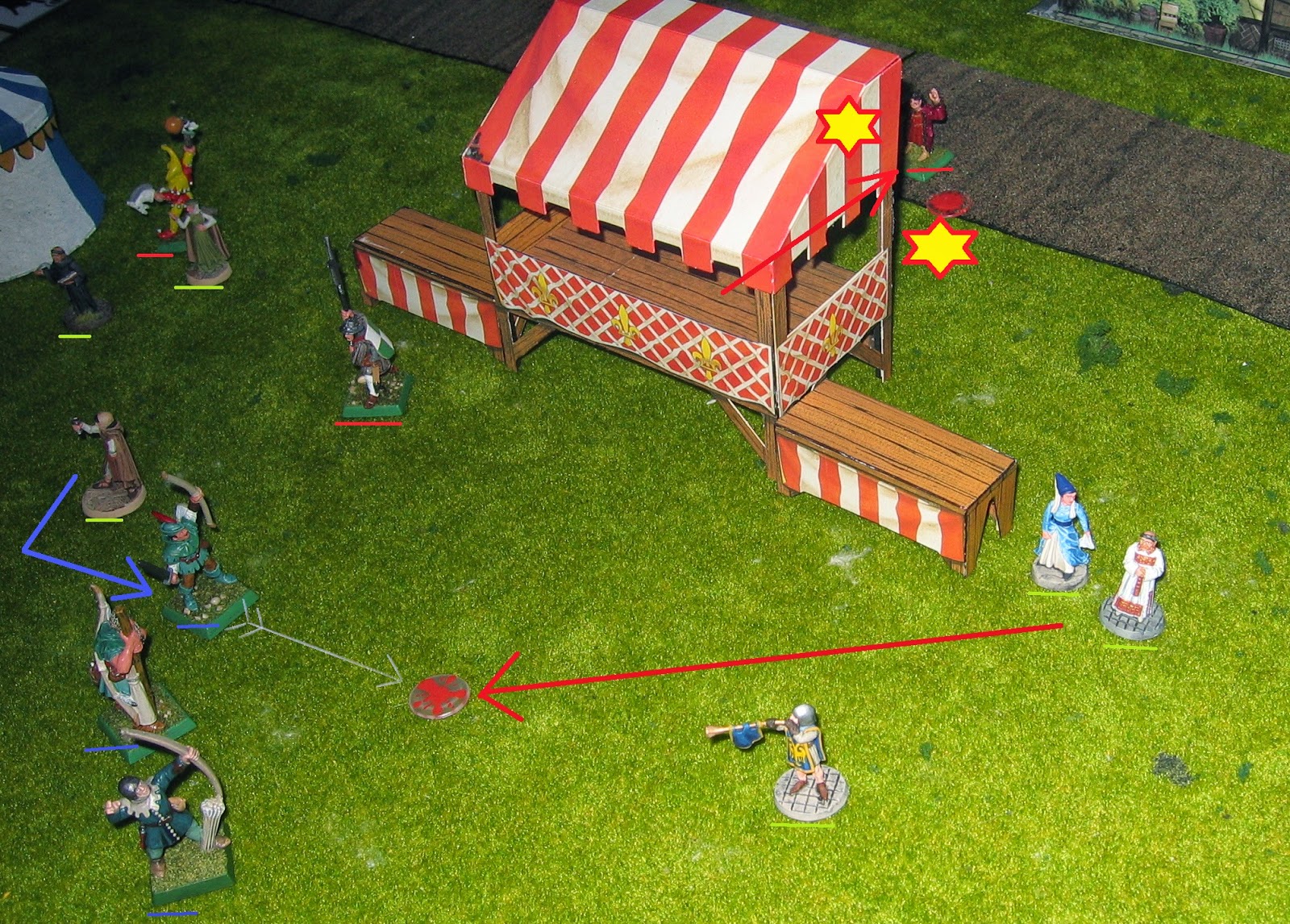 With difficulty, Robin managed to evade the embrace of the tipsy bystander.  He whipped an arrow to his bow and shot dead one of the approaching spear men in a particularly gruesome fashion.  This caused the Sheriff and his 2 guards to flee for 1 move from the covered stand.  When they paused for breath just a few paces away, the Sheriff promptly knifed both of his men for their cowardice (don't you just love the evil trait?) 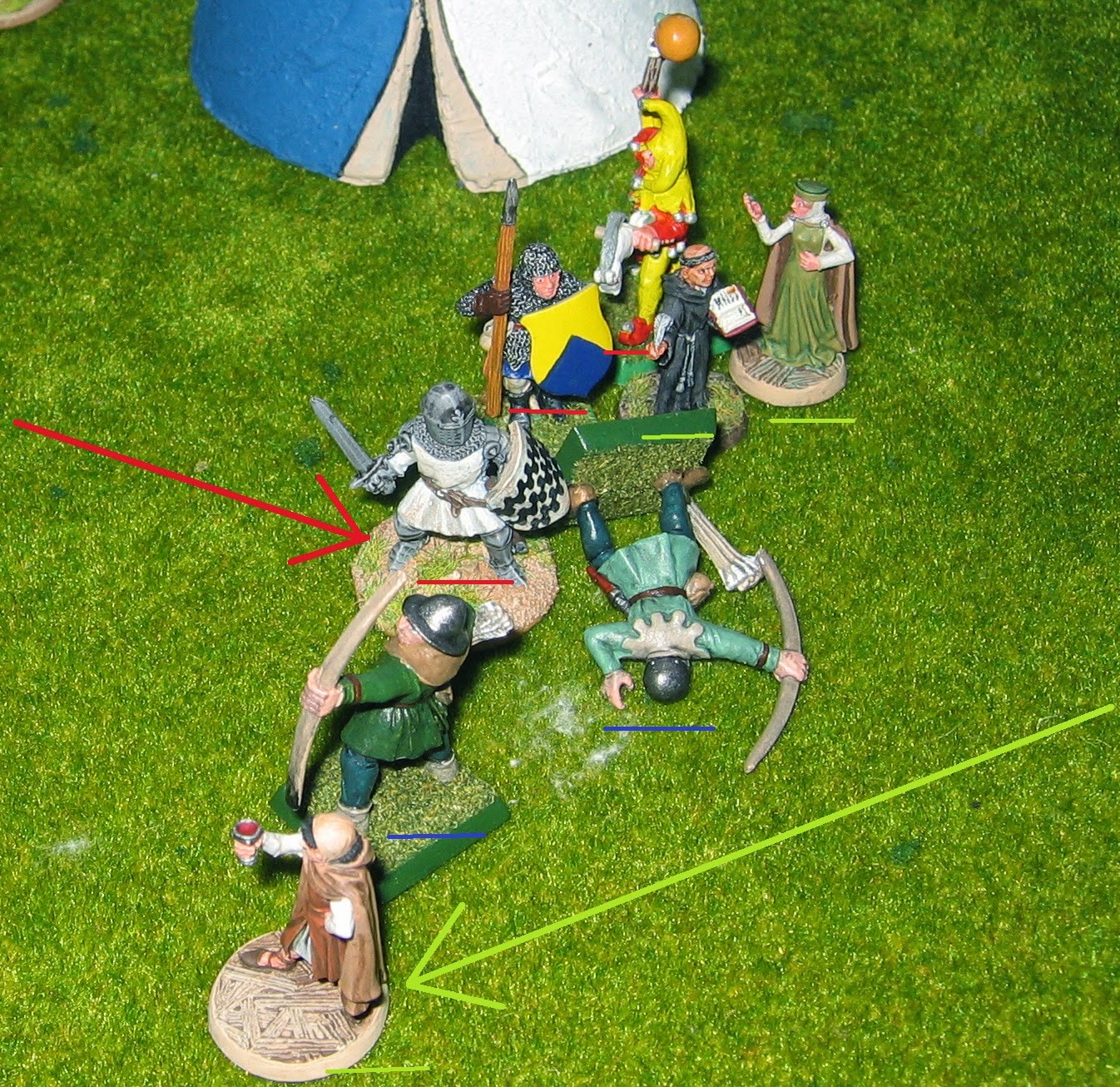 Back near the starting positions, the drunken bystander staggered onwards.  2 Merry Men had been a bit slow in realising that they were in danger and they now found their way obstructed by the crowd.  One of the outlaws was grabbed by a spear man and then cut down as Sir Stanley rushed into the fray from the nearby tents. 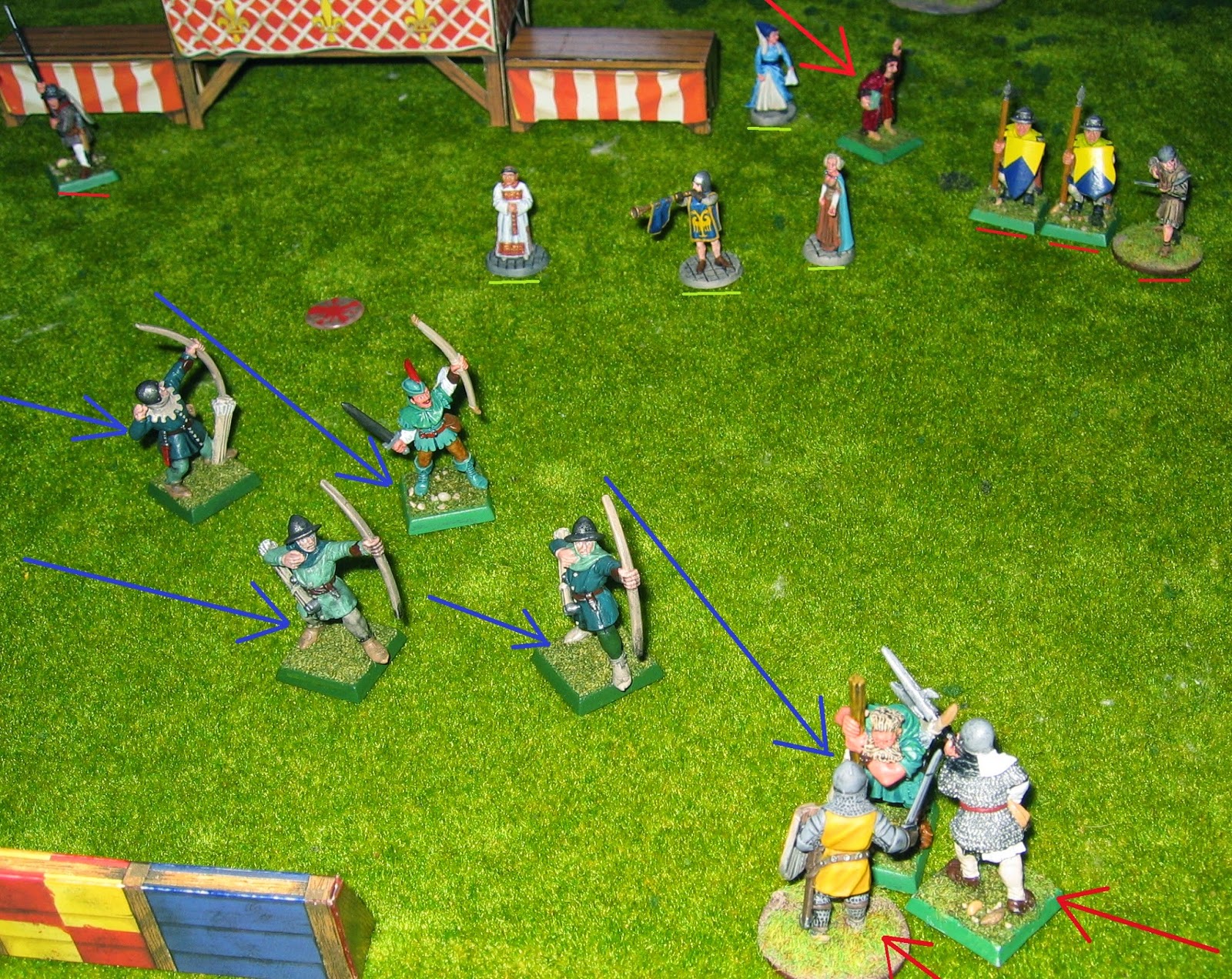 Robin and his remaining men shook themselves free from the crowd and started to run around the end of the tilt barrier.  Little John was in the lead, but was accosted by Sir Walter and a man at arms.  In the background, the Sheriff ran towards another group of soldiers, intending to order them into the pursuit.

Off screen to the left, Guy of Gisborne was trying to force his way through the crowd and catch up with Robin.  He kept looking over his shoulder at Maid Marion, to make sure that she was safe (she was promised to him as a bride, after all).  Between this distraction and the various citizens who clung to him demanding protection from the vicious outlaws, he didn't make much progress. 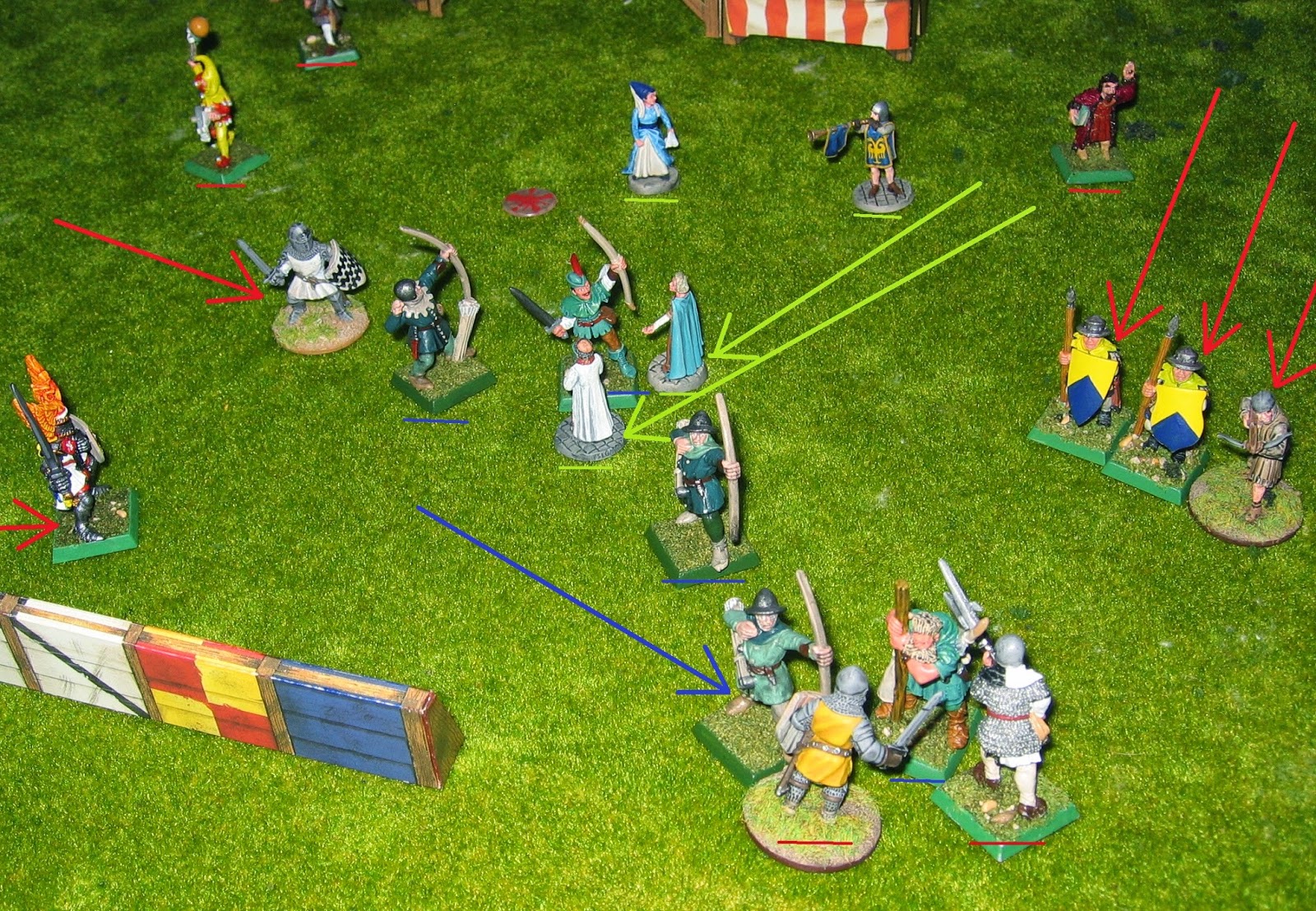 The outlaws sent a Merry Man in to assist Little John (though in truth, he was probably capable of fighting 2 men at once even on his own).  However, Robin found his way blocked by a priest and a lady in waiting.  "Is it true" the priest asked "that you give money to the poor and deserving?  I am - I mean my parish is very poor.  We could really use some cash".  The lady in waiting didn't say anything, but just simpered and giggled a little at the thought of being so close to such a dangerous outlaw - and him so handsome too...

While Robin was occupied with his fans, the Sheriff's squad approached from one side and Sir Stanley and Sir Guy came in from the other.  At this point, it didn't look as if any of the Merry Men would be able to escape! 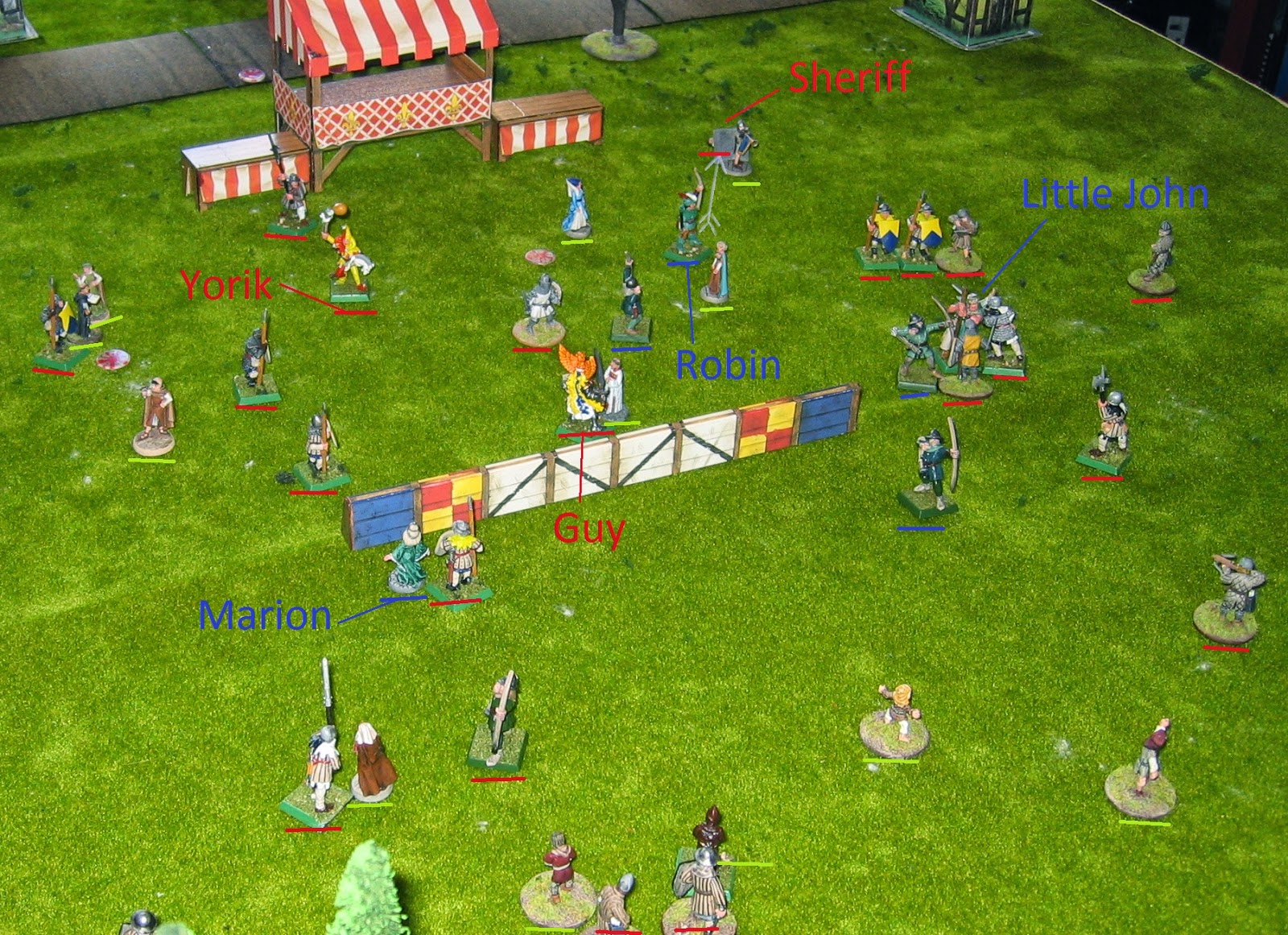 By this time, the field was in an uproar!  The priest moved on to obstruct Sir Guy, ostensibly to discuss details for his hoped wedding to Lady Marion.  It was all the knight to do not to cuff the impudent churchman out of the way!  However his betrothed was watching and he knew that she disapproved of such behaviour, so he restrained himself.

Robin glimpsed the Sheriff skulking nearby, hiding behind one of the tournament heralds.  When the civilian moved aside, Robin took a quick shot at his enemy.  He missed, but the Sheriff was so taken aback by the audacious attack that he fell over in the mud. 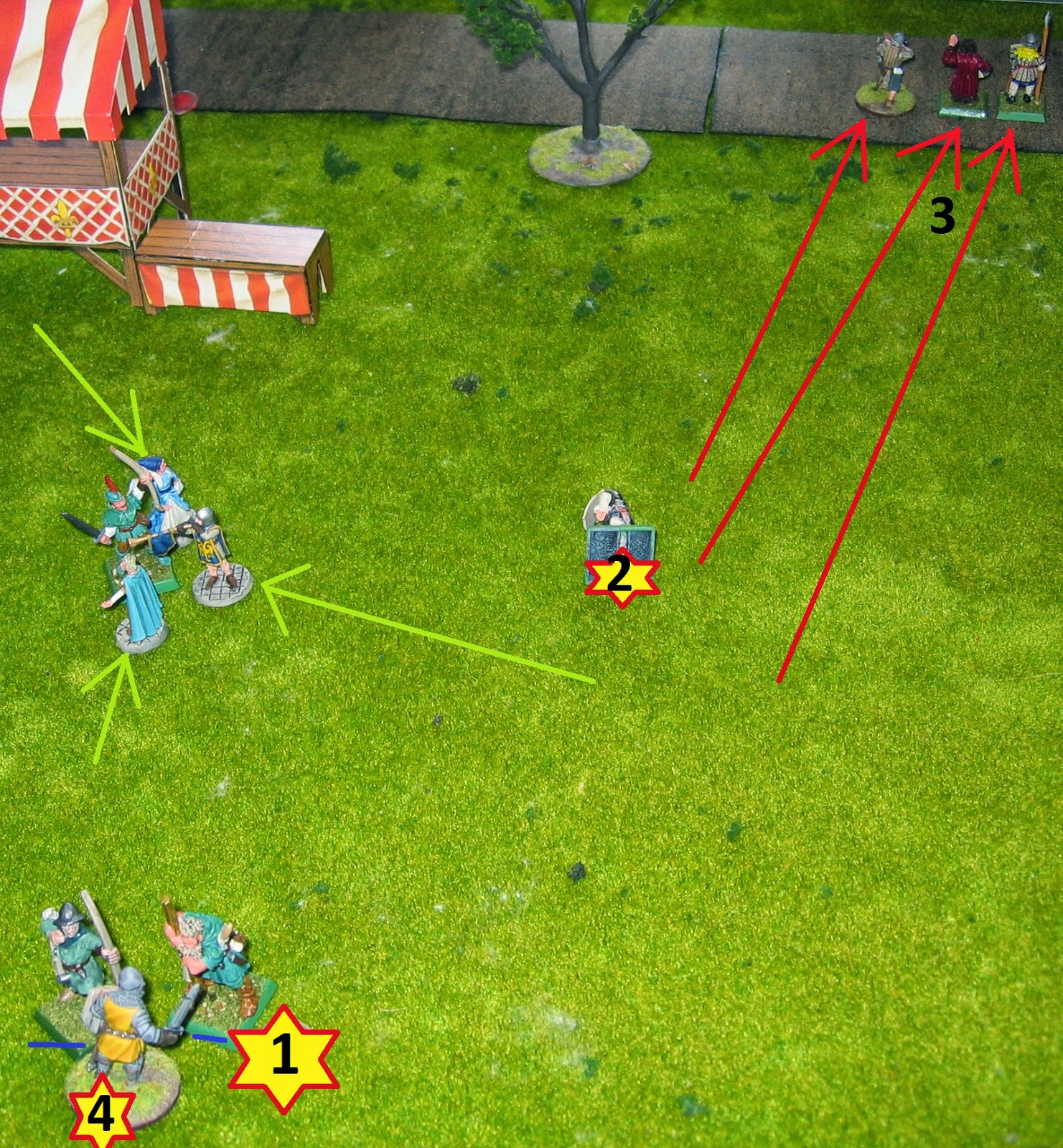 Just at this moment, Little John gave his opponent an almighty whack with his quarterstaff.  Nobody present had ever seen a corpse fly so far before; many of them felt very unsettled by the event.  First to run was one of the men at arms: he fled right past the Sheriff.  The evil lord tripped up his minion and daggered him, proclaiming "Thus do all cowardly dogs die!".

Next, the sheriff took his own morale check for seeing the original gruesome death.  He failed miserably, scrambled to his feet and fled like a bunny rabbit.  2 further men at arms routed off in the same general direction to keep him company (though presumably keeping more than an arms length away from their boss, just in case).

Strangely, both players were happy to see the Sheriff depart (and both hoped that he'd trip and fall into a midden in his hasty flight).  Steve, playing the outlaws, was concerned in case the Sheriff managed to use his Leader skill to organise a concerted attack on Robin or Little John.  On the other hand, I (playing the authorities) was tired of the Sheriff's evil ways, especially the slaughtering of "cowards".  Honestly, the man's a menace!  He killed more of his own side than the outlaws had managed, at least up to that point in the game.

Finally, Sir Walter was fighting the Merry Man just beside Little John.  When he glanced sideways and saw the giant's fury, he also turned to run.  However, Sir Walter wasn't lucky: the Merry Man lunged at the knight's back and slid his long dagger through an unprotected armpit.  Sir Walter fell to his knees and died before he even knew what had happened.

Spectators mobbed Robin, showering him with complements or complaining about the spoiling of the tournament.  Swiftly, he found that he couldn't move in the crush. 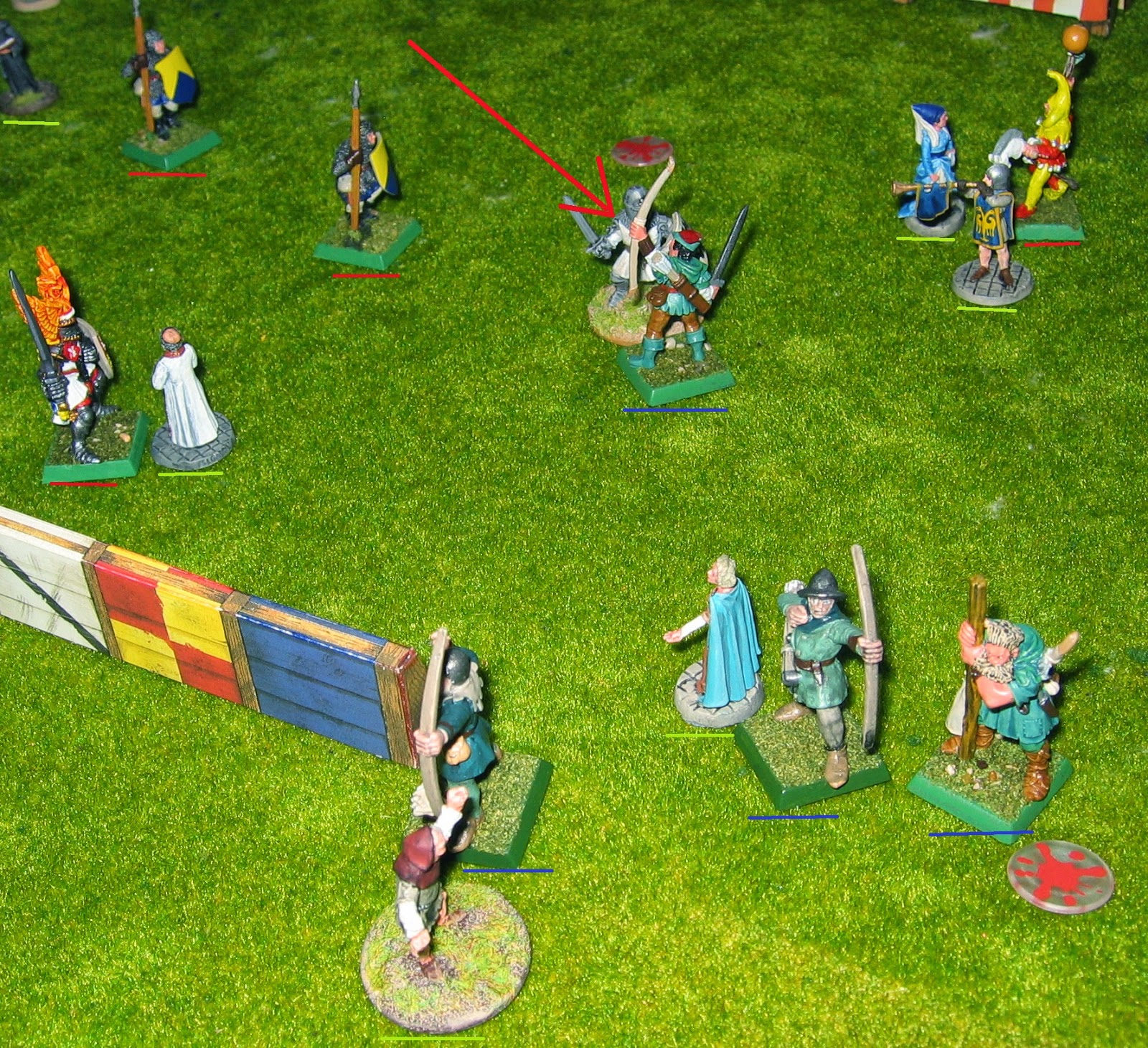 Robin was having a hard time of it.  He untangled himself from the mob, but hadn't gone very much further before Sir Stanley charged at him.  Robin struck at the over-zealous knight with his sword and killed him, but this was all taking time and other enemies were closing in. 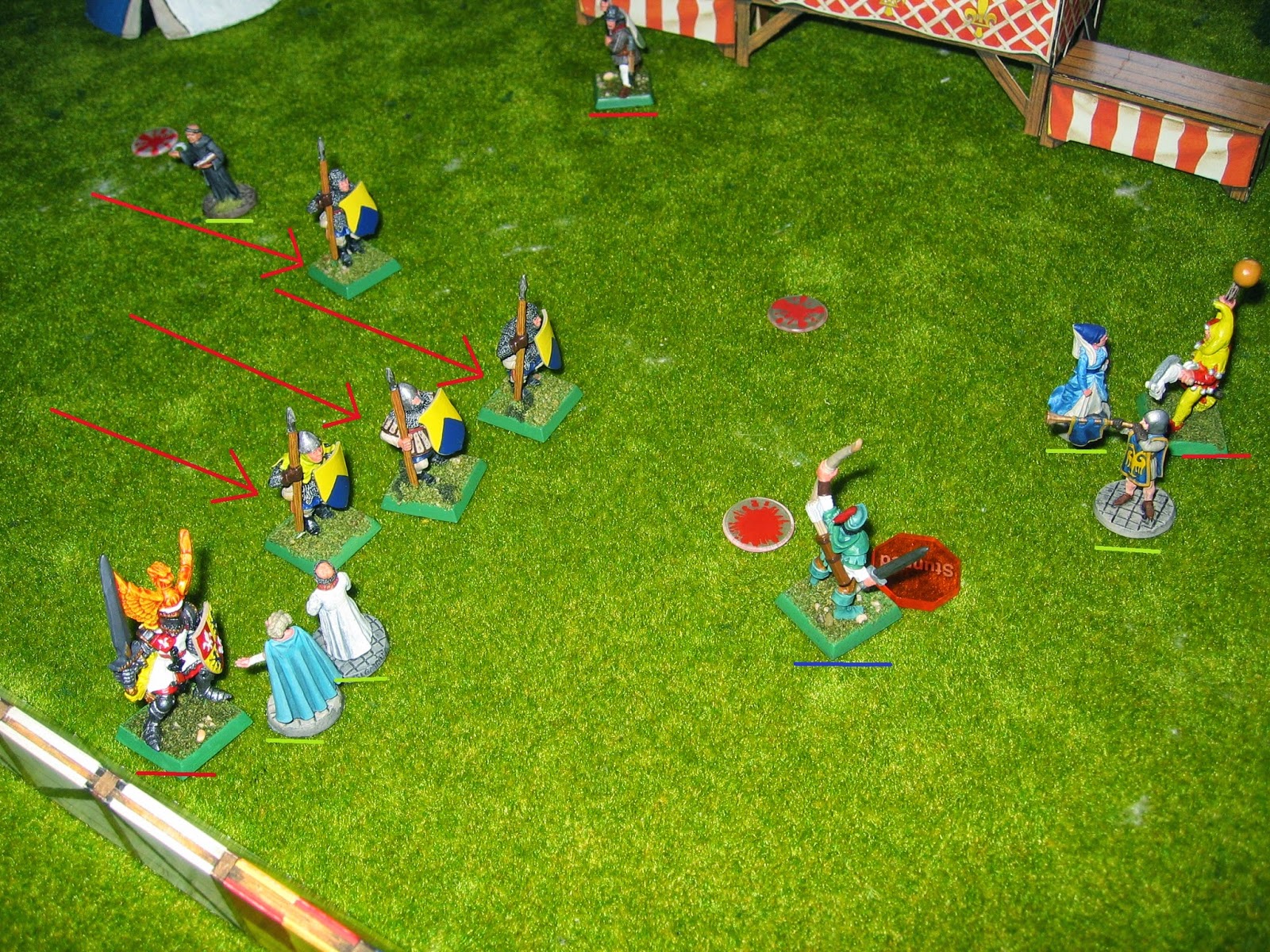 Now it was the time of Yorik, the jester.  He was partially hidden behind a couple of bystanders, but Robin could see that the little man was doing something terribly interesting.  His attention wavered as the jester cavorted, told half-heard jokes and played the fool.  Robin's attention wandered; he was torn between waiting for the punchline and fleeing his approaching enemies. 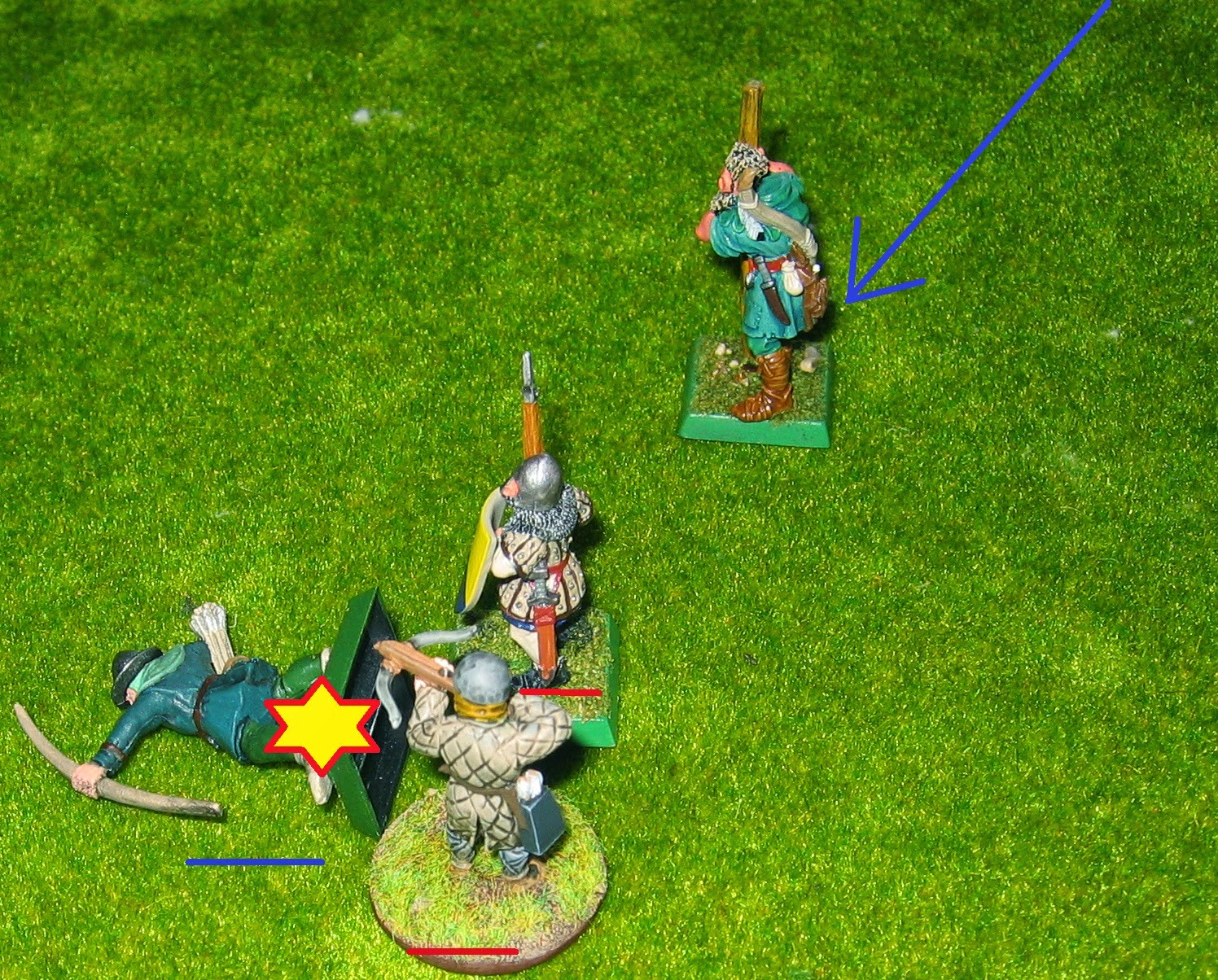 Towards the southern end of the tournament field, Little John had almost reached the edge of the forest.  The Merry Man behind him had fallen with a grunt and a crossbow bolt sticking out of the middle of his back.  The outlaw that was ahead of him was waylaid by a pair of men at arms and overwhelmed, so John was on his own! 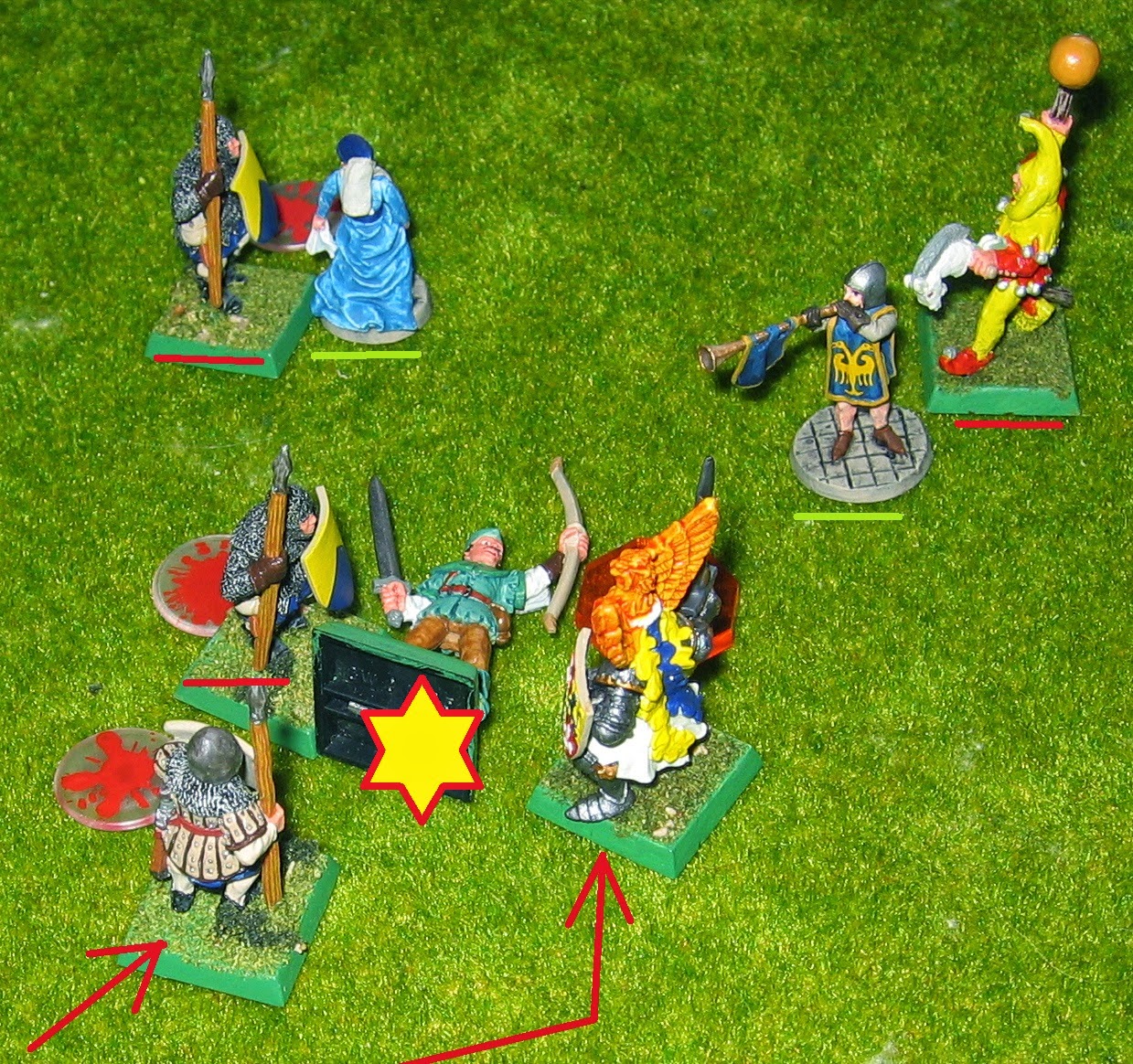 By this time, Robin had been left far behind by the other outlaws.  Several spearmen tried to grab him, though he killed one of them with his sword.  Robin kept turning round to try to see what Yorik was doing and this lack of attention was his downfall.  Eventually, Guy of Gisborne joined the fight (having persuaded Marion to come close enough to permit him!).  Between them, Guy and the remaining 2 spearmen managed to drag Robin down, though whether he was dead or captured wasn't clear.

Little John was so close to freedom now!  One Merry Man had scampered past him and disappeared into the forest, but soldiers kept trying to subdue the giant.  At one point, a pair of them even managed to knock him to the ground, but this small victory was short-lived.  Bellowing furiously, the huge outlaw set about all and sundry with his quarterstaff.  Once they were all defeated, he strode off towards the trees, defying anyone else to try and stop him! 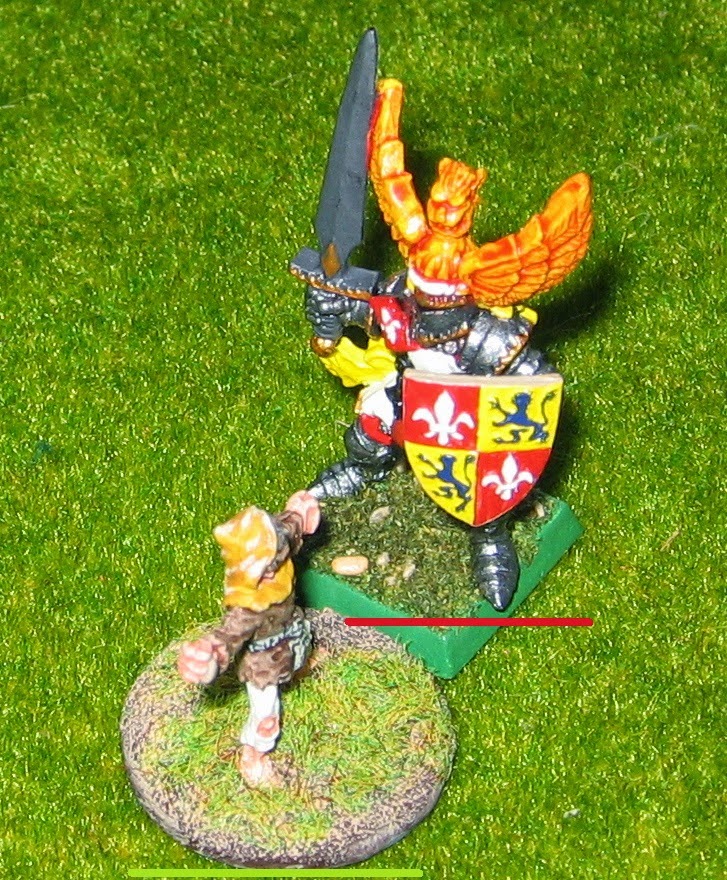 The only man left on the field who would have had much of a chance against the big man was Guy of Gisborne.  His forlorn pursuit was hampered by his need to stay close to Maid Marion and by the actions of the bystanders.  Firstly, "angry old man" gave the knight a lung full of invective and then "rock-throwing young boy" got in his way and taunted him!  With a sense of deep frustration and many unrepeatable words, Guy gave up the chase and went to seek the Sheriff.  At least he could report that they had captured the notorious bandit Robin Hood, if not his lieutenant as well...

I love "Song of Blades and Heroes"!  All through the game, both sides were left unable to carry out their plans just the way they wanted; much improvisation was needed to try to adapt to the changing circumstances.  There was plenty of high drama as the game swayed to and fro - also some good comic moments!

Possibly we gave the authorities a bit too much of an advantage in points.  The intention was to force the outlaws into running away rather than deciding to stay and fight it out - but maybe they didn't have much of a chance of escaping when there were so many enemies around?

In the end the game was a minor victory for the forces of law, although this was somewhat tainted by the fact that their leader smelled of sewage for a while afterwards.  Another game is clearly needed to rescue Robin from the executioner!

The "Man of the Match" award is a split decision; I cannot pick just one.  Candidates are: