Last year, I was still on holiday with my family when the annual Claymore wargames show was held in Edinburgh and so I couldn't go to it.  This year I made sure that we took our vacation a little earlier and therefore I'd be able to attend on Saturday 2nd August.

As before (see here), my younger son (A.) was very keen to come with me.  On the Friday evening, I warned him that we'd need to leave quite early (it's a long drive from Helensburgh to Edinburgh) and that he'd need to be ready in plenty of time.  The boy is not normally known for getting out of bed early, but on the Saturday morning he was up and about hours before I awoke.

The journey to Edinburgh College was long and dull.  A. slept for most of it - not really surprising under the circumstances!

The rest of this article describes our experiences on the day.  It's not a full show report, but rather a personal account.

Edinburgh College, Granton campus was formerly the separate Telford college.  It's in the north-west fringes of Edinburgh, with ample parking and (I believe) a good bus service to the city centre.  Claymore uses the main hall/cafeteria and a large sports hall, both on the ground floor but somewhat separated from each other by a long, narrow corridor.  Either hall would be a good-sized event if this was a regional show, but together they make it a very comprehensive exhibition.

The only negative comment I'd have about the venue is that the catering is awful.  The only choices seem to be fried and yellow or brown in colour; I couldn't even see any pre-prepared sandwiches!  Added to that, there's very little seating, presumably because the show has taken over the tables and chairs for games and trades.  Last time I went to Claymore, I promised myself that I'd take a packed lunch on future visits - but I forgot. 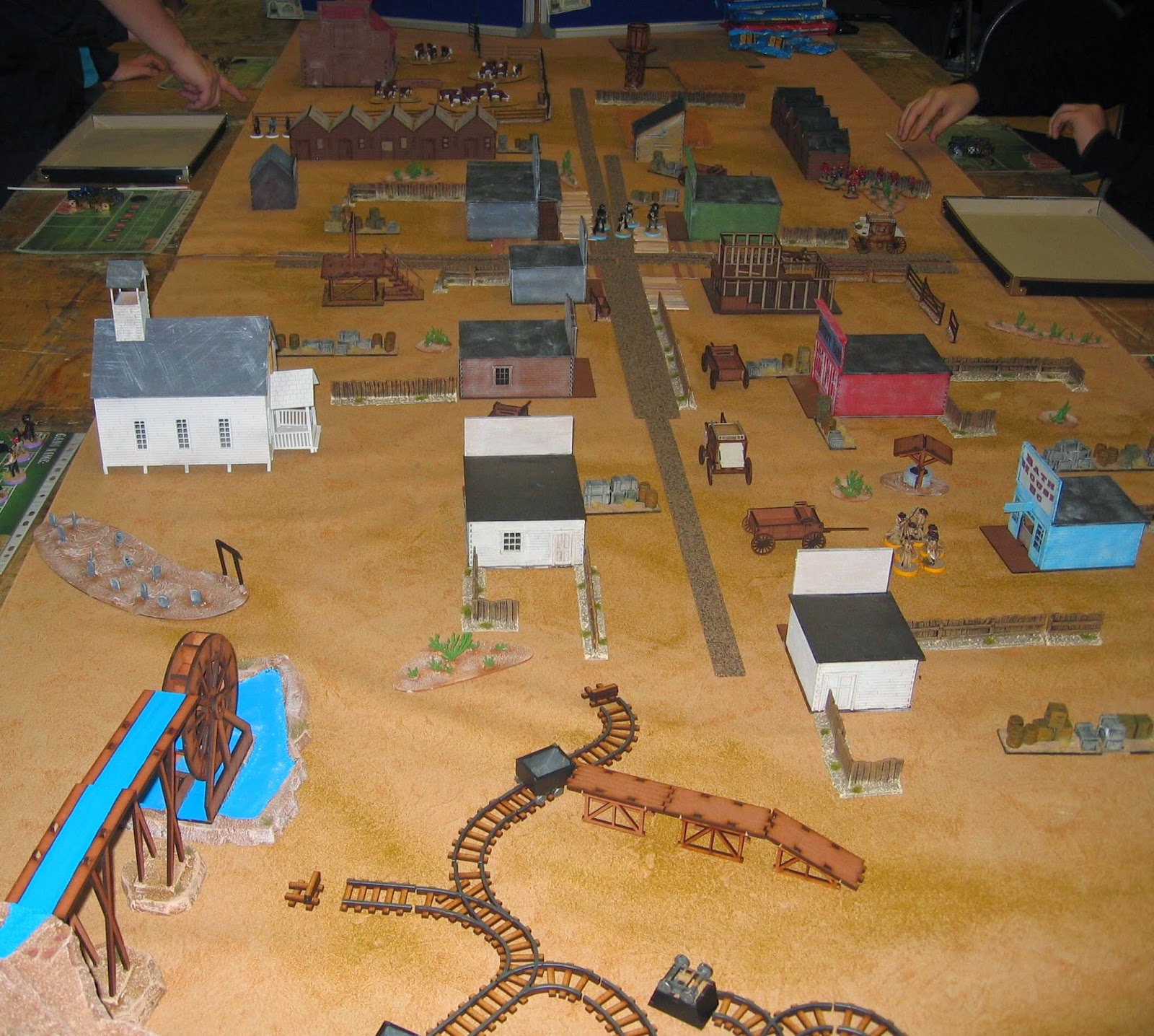 Almost as soon as we entered the show, we were offered the chance to play in a cowboy shoot-out game.  I forgot to record the name of the group hosting this game, but they had a large table and 6 or so gangs ready to go.  I took the "drunkards" whilst A. took the "cattlemen".  2 other lads joined in as the "Mexicans" and the "outlaws".

The rules for this game were extremely simple, to the point where there didn't seem to be any tactical finesse possible.  My gang made a beeline for the Mexicans, whilst A's cattlemen approached more cautiously.  Meanwhile the outlaws ran the other way and had pretty much reached the further outskirts of the town before an umpire suggested that they turn around!

In a blaze of gunfire, A. and I reduced the Mexicans to a single survivor.  Unfortunately the Mexicans concentrated their return fire on me and (with some luck on their side) wiped out the "drunkards" completely.  Since he'd wiped out another gang, the lad who was playing the Mexicans was rewarded with a Wagon Wheel biscuit (cookie to readers in U.S.A.).

Now that he realised what was at stake, A. then spent the next several turns chasing down the lone remaining Mexican with his untouched cattlemen, before finally cornering the poor fellow and gunning him down to earn himself a Wagon Wheel too.  Shortly after this, A's gang ran out of ammunition and he surrendered to the newly-returned outlaws.

The club from Leuchars always put on a good participation game and this year was no exception.  A team of 3 players had to fly a "dambuster" bomber to attack one of the dams on the Ruhr.  In order to do this, the team had to enter a mock-up Lancaster cockpit, wear a rubber "flying helmet" and guide the aircraft towards the target.

When we played this game, we flew in plane "L"/Leather.  I was the pilot, A. took the front gun turret and some other lad was co-opted as bombardier.  For some strange reason, the aircraft kept drifting to port, A's suppressive fire wasn't enough to keep the enthusiastic flak from hitting us and...well we didn't do too good: 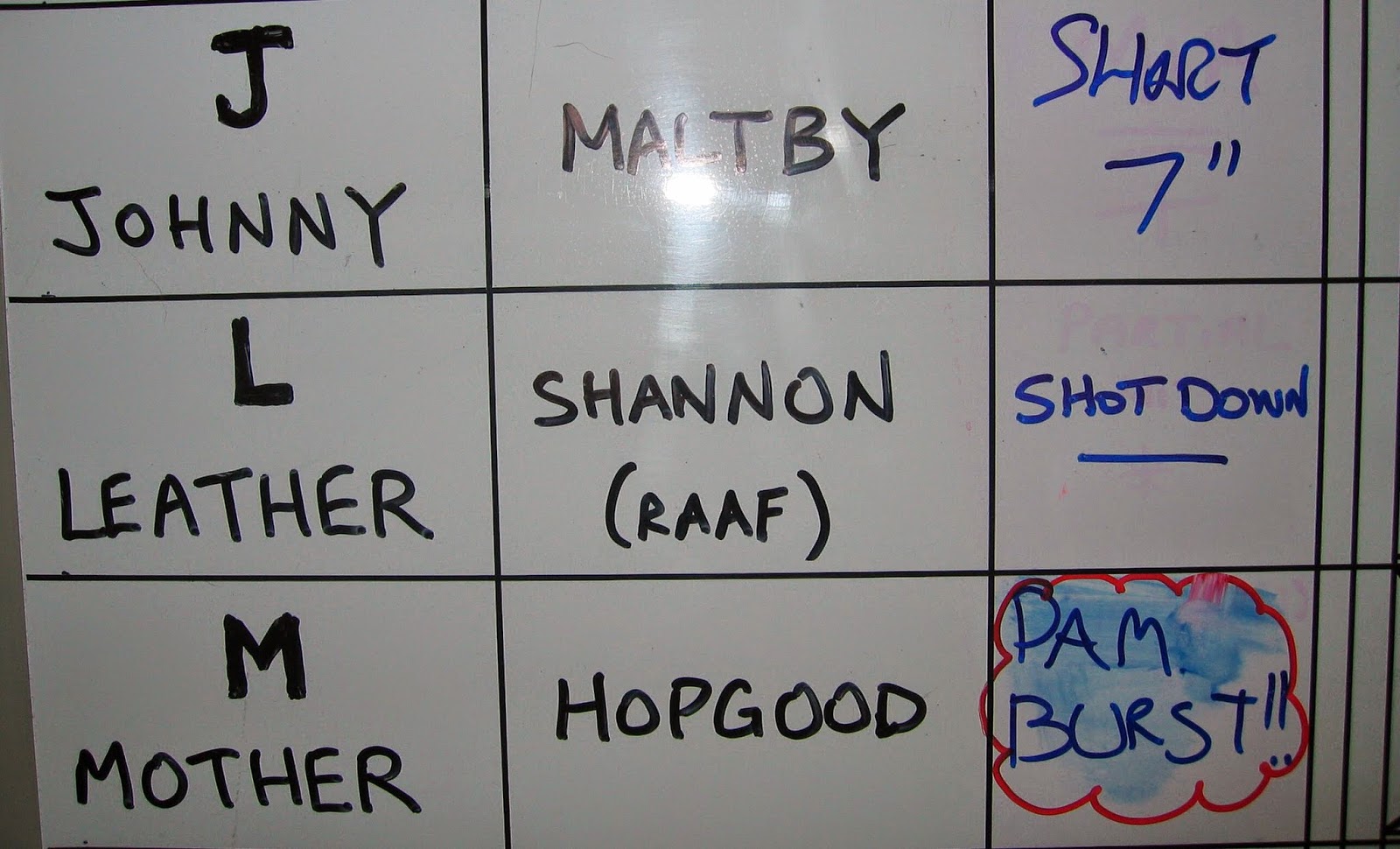 This was a quick game (perhaps 10 minutes), but had a great atmosphere and was fun.  Just how it should be, so many congratulations to the enthusiasm and inventiveness of the Leuchars club! 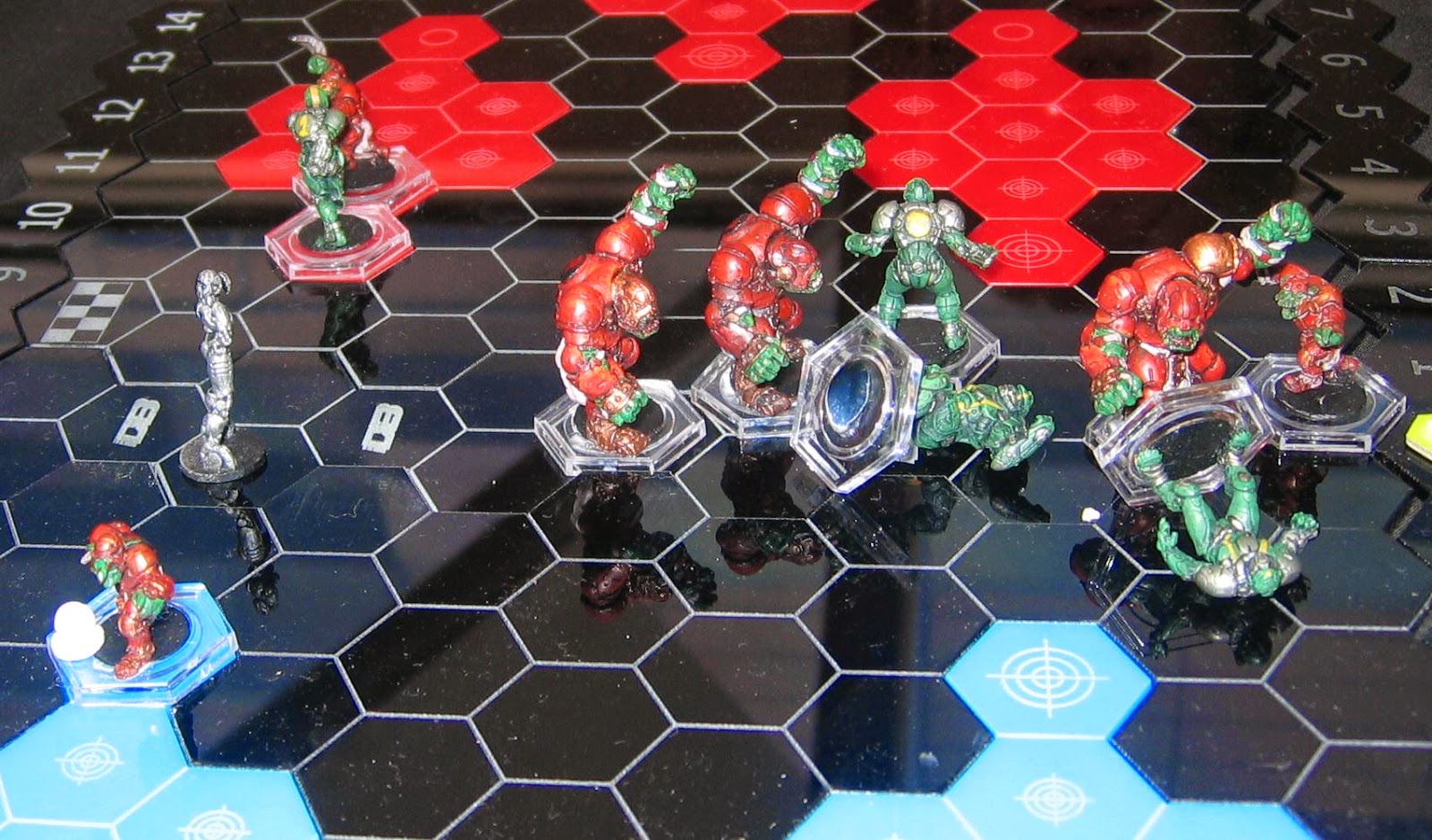 A while ago - maybe a year - I bought a reduced Dreadball starter set.  Soon after, A. saw the half completed figures sitting on my painting desk and has since indicated a lot of interest in playing the game.  At Claymore this year, we had the opportunity to play a Dreadball match, with a rather tired-looking but very helpful referee (to whom, many thanks indeed!).

A. took the Orks (in red), whilst I fielded the human "Corporation" team in the green uniforms.  Within 4 turns, most of my players had been flattened and were temporarily out of the game - I was down to 3 models at one point.  A's goblin even got the ball as far as one of my strike zones, but didn't get a chance to shoot for goal before my desperate substitutes rushed onto the field, snatched the ball from him (with some difficulty!) and ran in a score of my own!

We didn't play out the rest of the game, since it would have taken quite a bit longer and we'd have been holding up the demonstration slot.  Still, I think that we both came away happy: me because I managed to score a single point and A. because he crippled half my team!  I'll have to push my own Dreadball figures up the painting priority queue, I think... 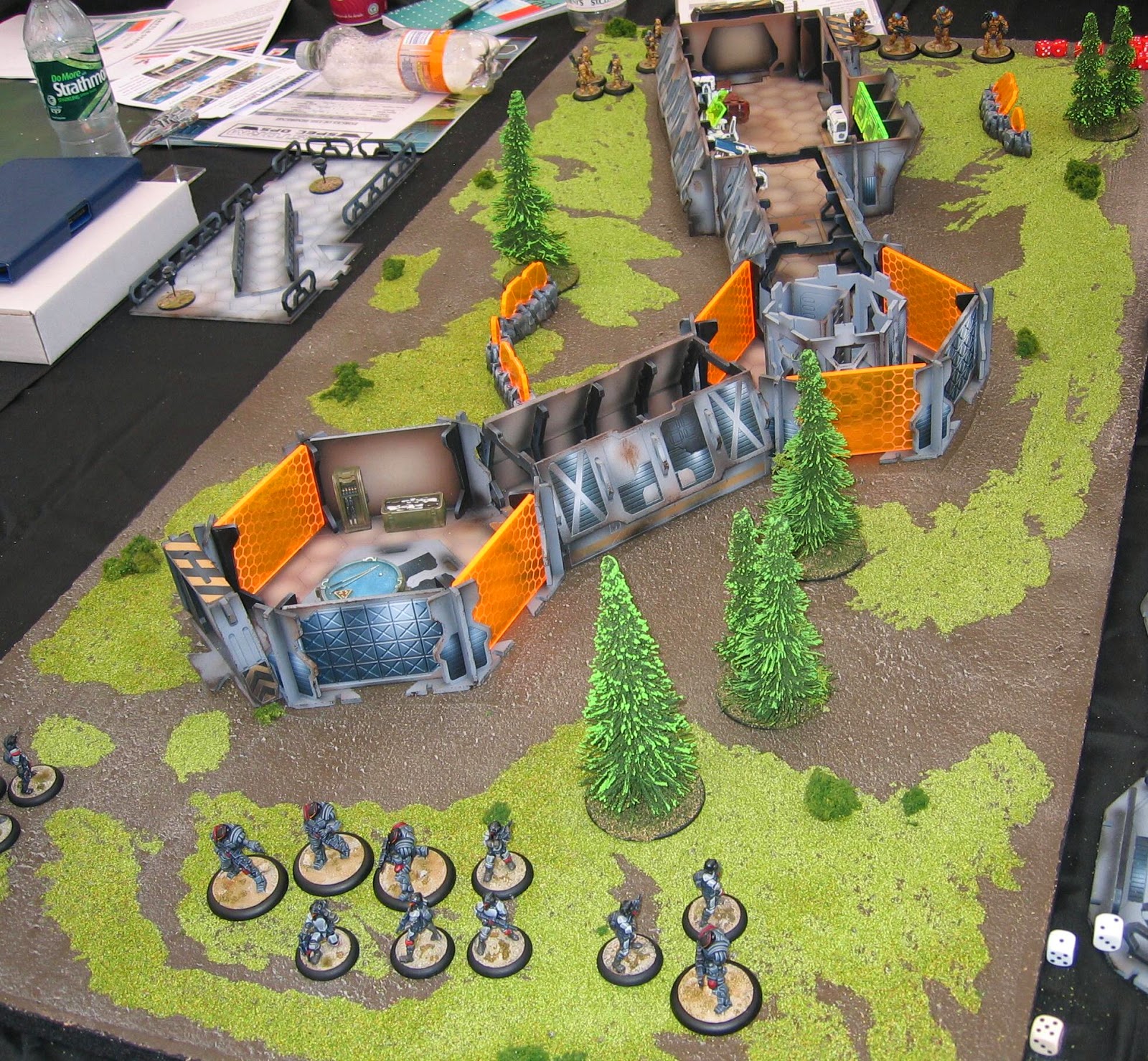 In our final game of the show, A. got a chance to try out the not-yet-released Spec Ops rules from Spartan Games.  This covers man to man combat in their Firestorm science fiction universe, which is otherwise best known for the "Firestorm Armada" space combat game.

A. took a Dindrezi commando squad against a somewhat harassed-looking demonstrator's human forces in a mission to take over and destroy a command centre for a missile bunker.  From what I saw, it appears that fire power is weak relative to armour: 2 squads blazing away at each other from point blank range and without cover would tend to cause a single "wound" result rather than mutual annihilation.  Also there didn't seem to be much in the way of command and control subtlety and morale results were perfunctory.  However perhaps we saw an introductory subset of the rules rather than a rounded whole?

Either way, A's aliens obliterated the defenders and blew up the command centre without even breaking a sweat (if that's something which Dindrezi do anyway?).  The big guys on his side - there were some troopers that were considerably larger than the others - seemed especially effective, to the point of being almost invincible.  A. came away from this with an urgent desire to get the game and play it some more!  I'm not so certain... 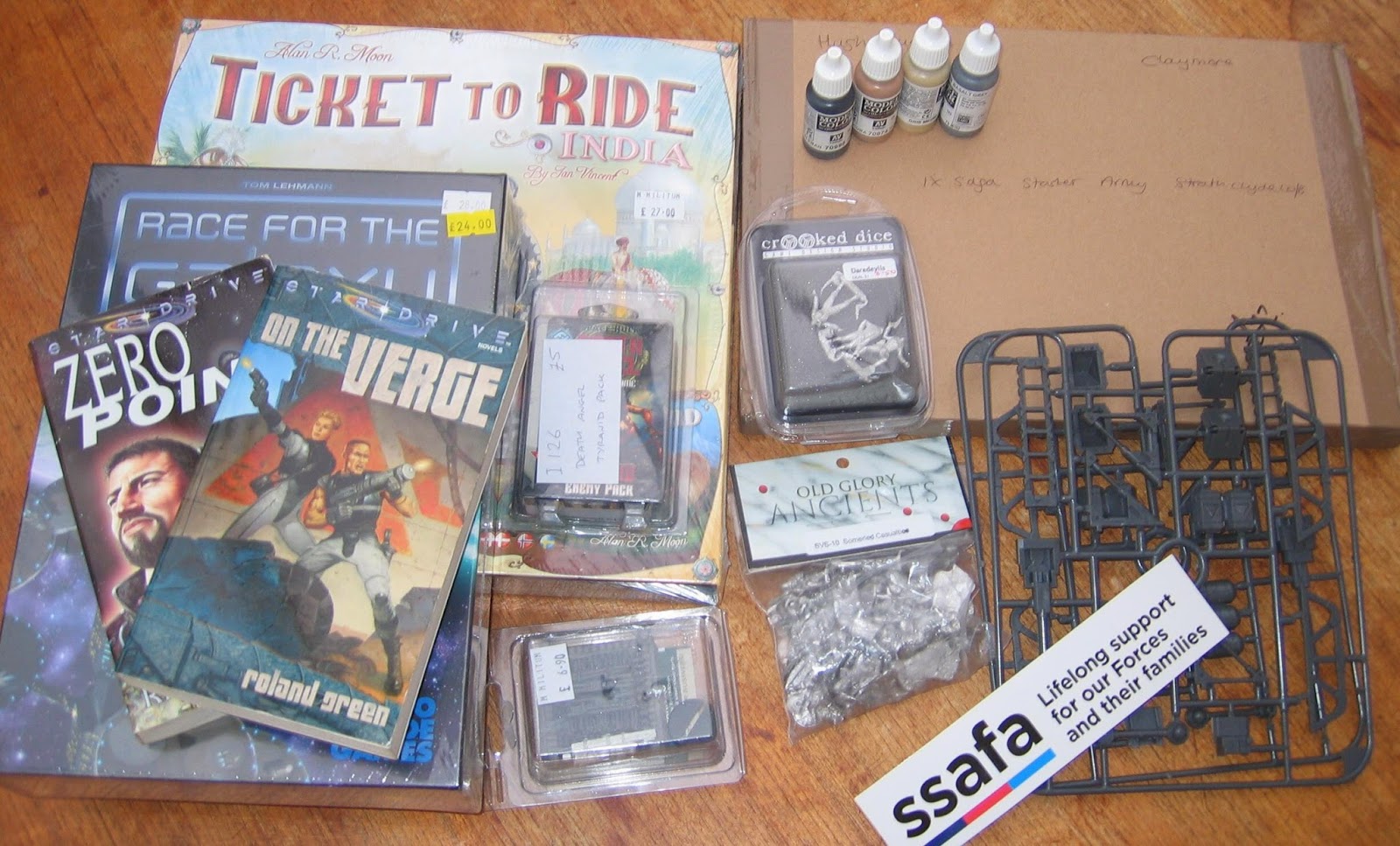 OK, now for the obligatory loot picture.  I got some cheap sci-fi books from the Bring-and-Buy (something of a guilty pleasure of mine), as well as some boardgames.  Mantic sprues were being handed out quite liberally, so I ended up with a couple of free terrain sprues for their new "Deadfall" game.

I pre-ordered a SAGA Strathclyde started army, so I'll have lots of Dark Age ponies to paint up at some point.  For now, however, that package has been taken from me by my wife, to be handed back on my birthday.  In the meantime, I have a pyre with bound victim that will be made up as a witch being burnt at the stake.  Also a large pack of Dark Age casualties from Old Glory; these will be used as decoration on the bases of SAGA warlord models or as separate fatigue markers or something like that.

A. also got some loot: a sprue of Mantic elves, a blister of Perry knights and a few figures he found in a "rummage" box.  I suppose he'll be asking for help to build all these some time soon...

At the end of the day, the trip home was just as long and dreary as the journey out had been.  This time, though, there was torrential rain for much of the time, which didn't help.  Once again, A. slept for quite a bit.  I'd have liked a nap myself, but since I was driving I couldn't really do this.  Still, Sunday will be a very quiet day, I think!

Email ThisBlogThis!Share to TwitterShare to FacebookShare to Pinterest
Labels: 2014, Claymore