I've written a few posts on paper models recently, so I think it's only fair that I photograph my entire collection.  As well as being a visual treat for your eyes (I hope!), getting the entire collection together in one place also allows me to take stock, find any notable omissions, spot any damage that may have occurred and so on. 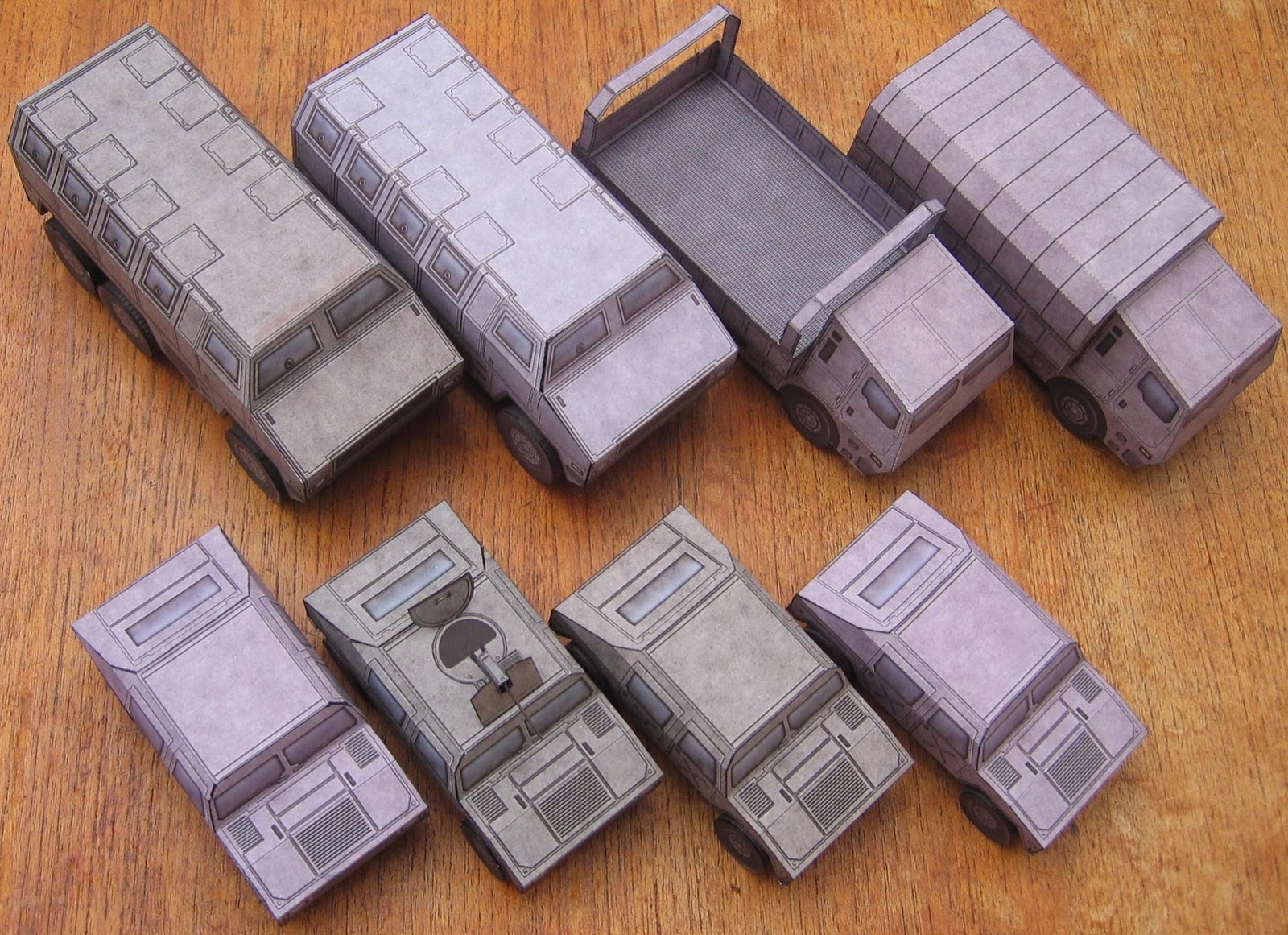 My army trucks and APCs are all from Genet Models, which used to be known as Ebbles Models, I think.  These all come from the Patrol and Convoy kits - at least, that's what they were called when I bought them.  I think that the site may have been rearranged since then.

One note about the Genet kits: they're huge!  If I remember correctly then I printed these out at 84% or so of the original size - and they're still very large vehicles, if not quite so overwhelming as before.  At least you can resize paper models easily!

My collection of emergency response vehicles are almost entirely police machines and almost entirely from WorldWorks Games. There is a single ambulance but no fire engines (a distinct gap in the market, I think.  I've not seen a fire engine yet that I would wish to build).

The other outsider is a solitary white "No Go Zone" police car in British colours.  It's a nice idea, but the car body has a very complex shape and the texturing is bland.  I wouldn't recommend this to anyone unless you are an experienced card modeller and have a particular need for UK-branded cop cars. 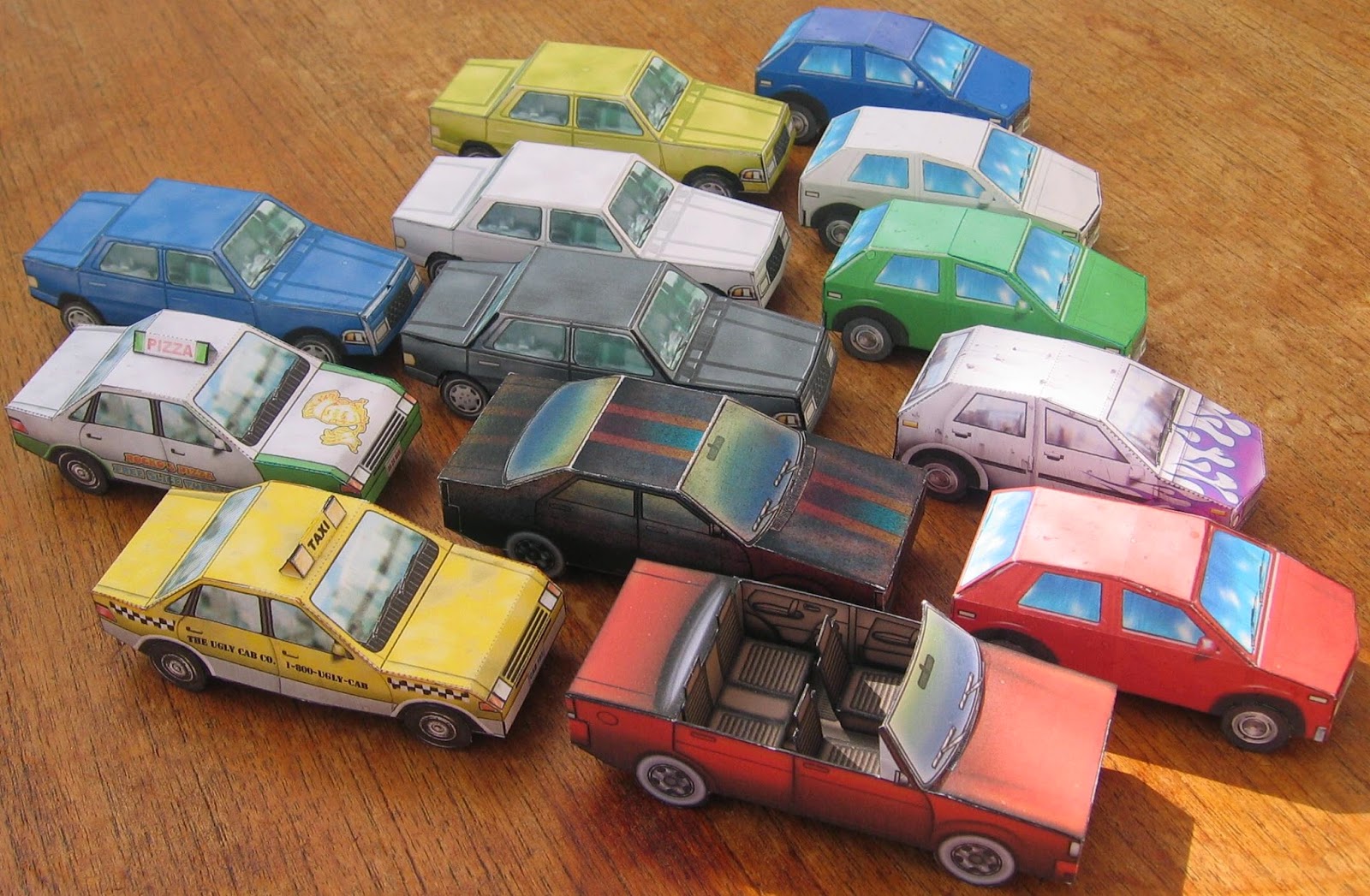 Here is my collection of compact and sedan cars.  All of the ones at the back are from WorldWorks, but the four at the front are from Stoelzel's Structures, if I remember right.

Note the convertible at the front: I'm very pleased to have it, but it did take a lot more effort to build than any of the other vehicles here.  Obviously, it has an interior and that complicates the design quite a bit.

Also note that the convertible is a little larger than the other "civilian" automobiles.  This inconsistency of scale is something that afflicts most manufacturers to some extent.  Mind you, I think that WorldWorks is probably a far worse offender than Stoelzel in this respect. 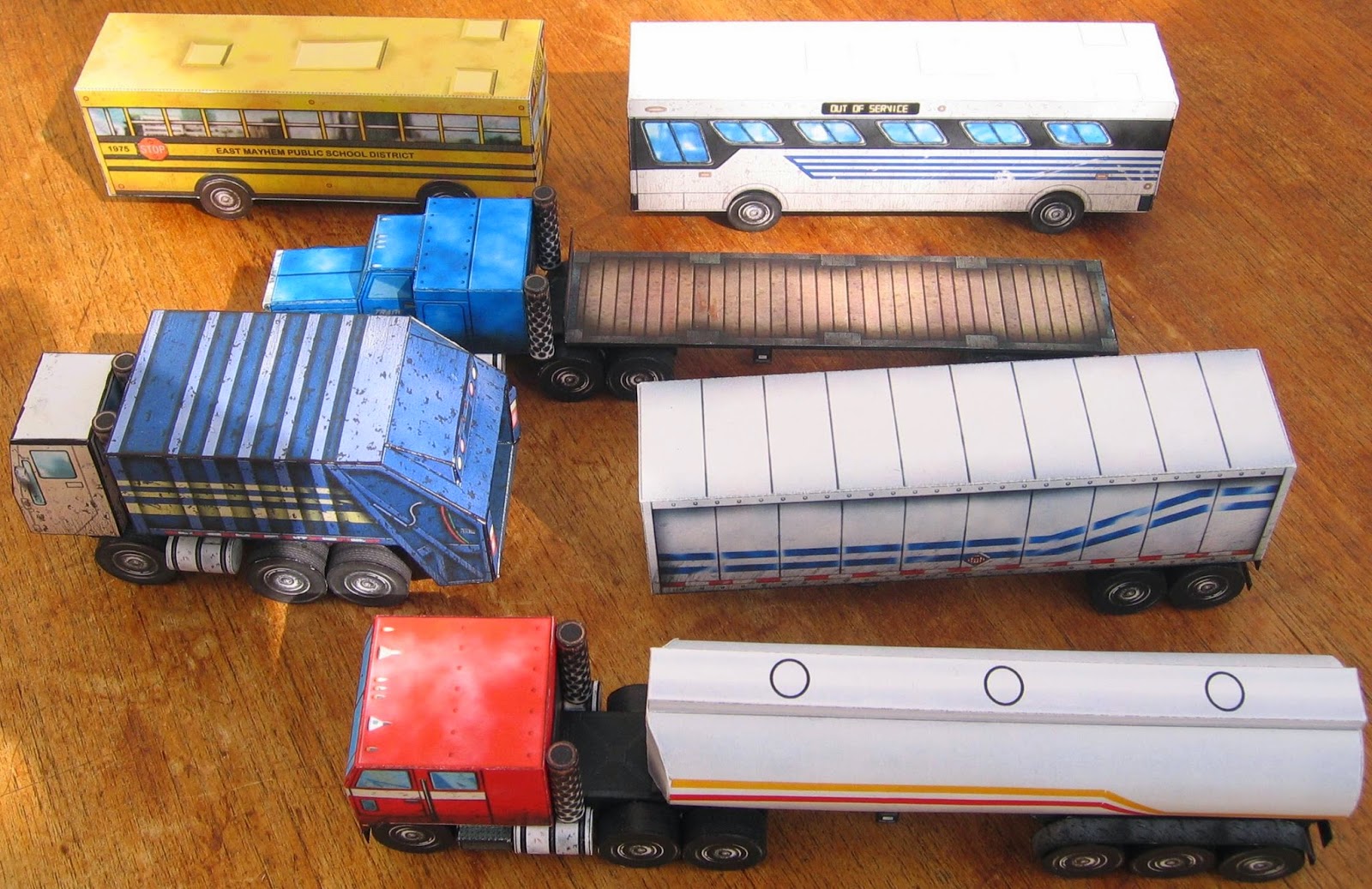 I have a relatively small collection of large commercial vehicles: 2 buses and 2 articulated trucks (with 1 extra trailer).  Also there's a garbage truck.  This latter is an early WorldWorks model and although it has all the right components, it just doesn't look quite right to me.  The cab is too narrow, the body too wide and tall.  Additionally, the double tyres at the back are badly aligned with the single tyres at the front.  It's an odd model.

On another note, buses are some of the easiest card models to make, so I would recommend them strongly to anyone who wished to begin making this type of kit. 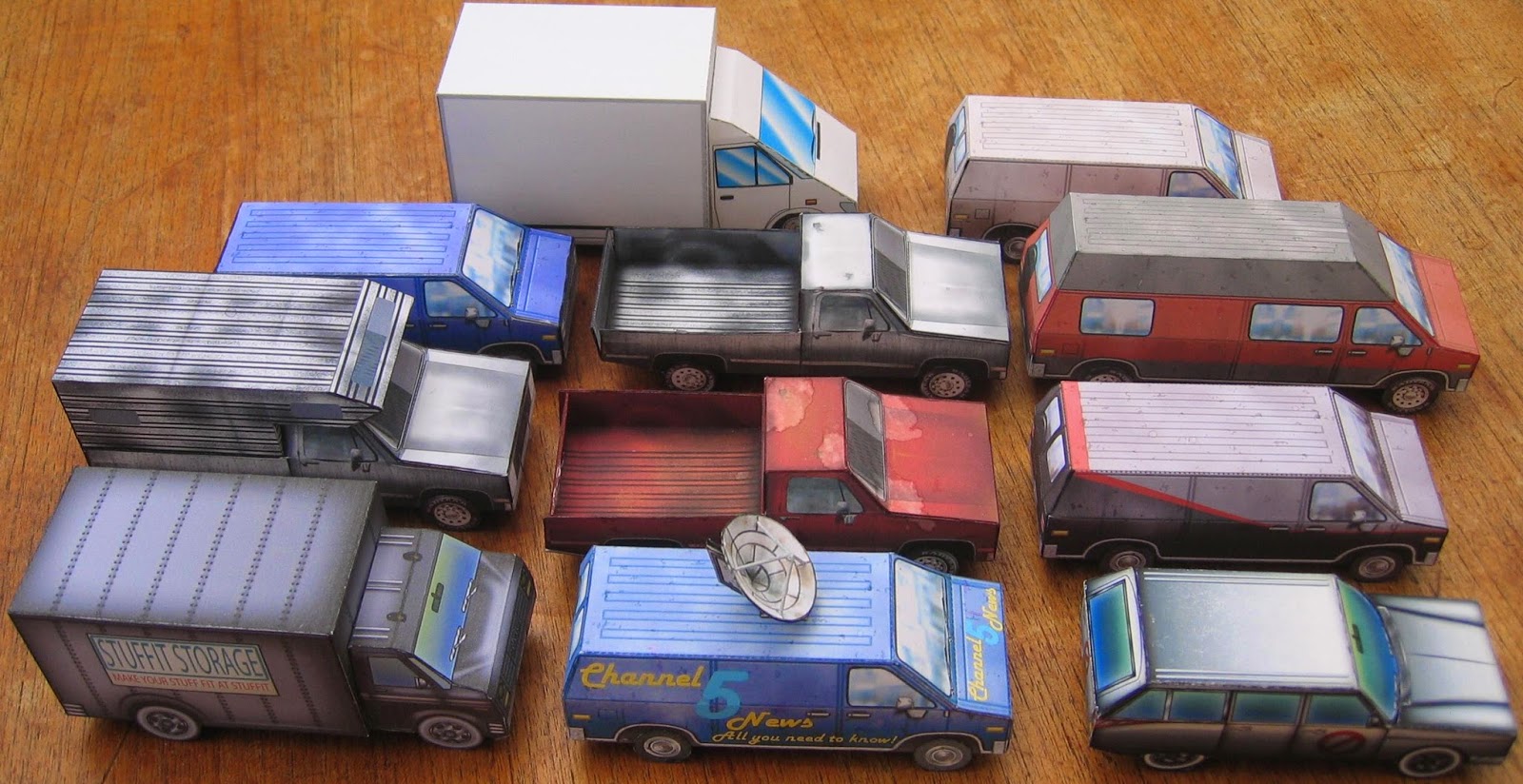 I have considerably more light commercial vehicles than I do of the large ones.  Most of these are from WorldWorks, though 2 in the front row are Stoelzel's and the white box van at the rear is a No Go Zone kit (one of my least favourite models.  It was a little awkward to build and I don't think that the result is very impressive)

Note that this picture clearly shows one of the worst discrepancies in scale between the WorldWorks vans and their pick-ups.  I'm not an expert on cars and trucks in real life, but surely the vans should be rather bigger than the pick-ups?  If anything, it's the other way round for these models.  As before, I could resize the printouts, but it's somewhat annoying to have to do so when the kits are all from the same publisher. 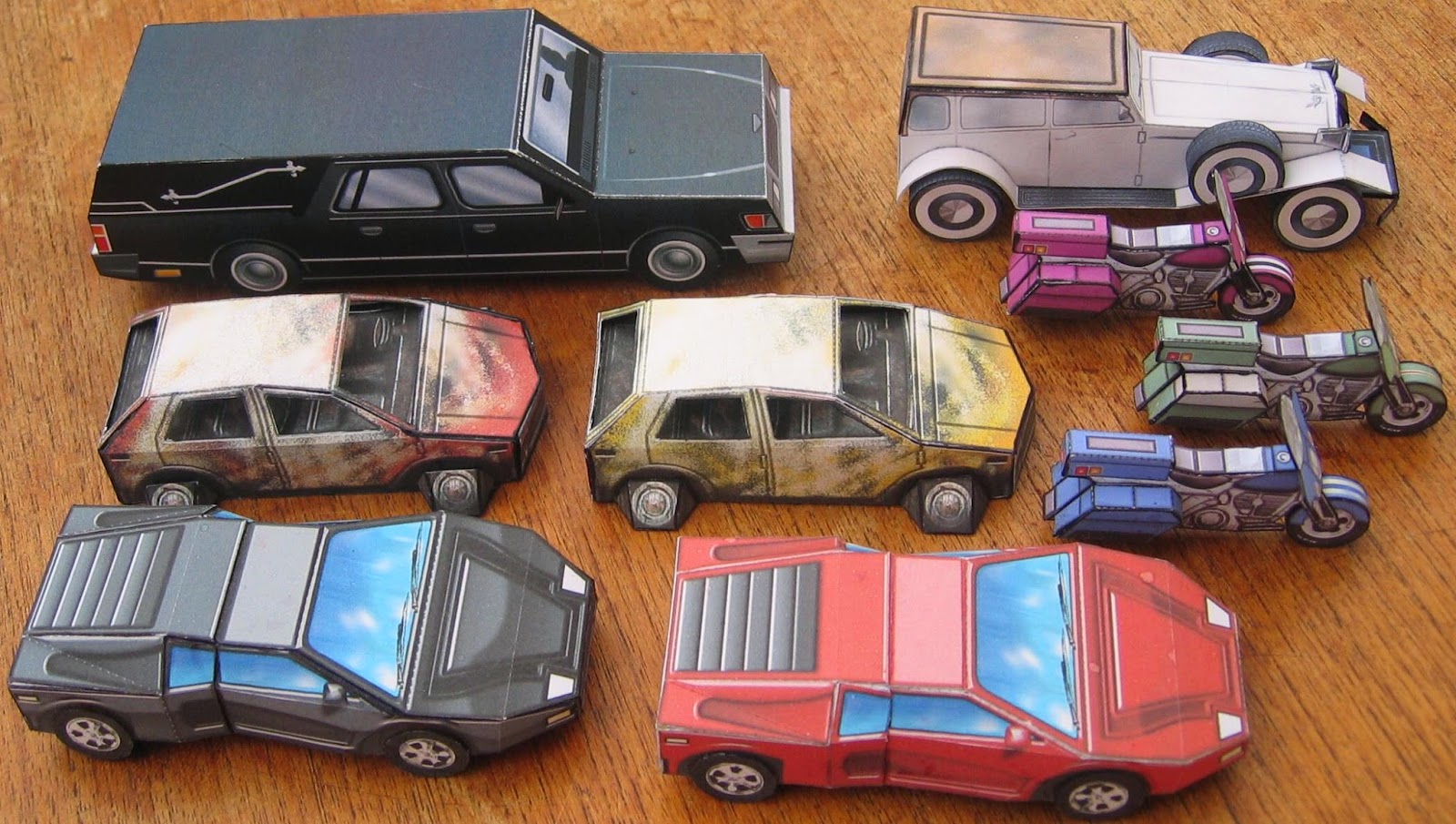 These are the remaining vehicles that didn't seem to fit into any other category.  There are 2 "Lamborgharri"s, 2 burnt out compacts, 3 motorcycles, a classic roadster and a hearse.  The latter is from Mega Miniatures; the rest are again from WorldWorks.

Most of these models (apart from the hearse) are significantly more complex than average to build.  You should be able to tell this just by looking at them!

This may look like a lot of models, but remember that each one is very cheap to make.  Once the kit has been purchased, each new car is typically just half a sheet of cardboard and a little printer ink and glue.  They're also relatively quick to build, which is partly why I have so many: card vehicles are very good filler models between other projects or when you only have small amounts of time for the hobby.  I've never sat down to build more than 2 or 3 vehicles at any one time, yet over the years the collection has grown steadily!

So, what do I think is missing from this collection?  Well, I could use more estate cars (station wagons).  The Stoelzel's car set has a number of these in it so I'm certain to build some in due course.  There are no good fire engines on the market, at least ones that I know about.  And I've never come across any kits for construction or agricultural vehicles, apart from a single excavator (?) in one of the WorldWorks kits.  I'd really like a cement mixer; imagine what you could do in a game with that!
Posted by Colgar6 at 19:03