So, last weekend Steve came round for a day's gaming.  This is something we're fortunate enough to be able to do every few months and since it's quite a long journey for poor Steve, we try at least to make it an activity-packed visit.  This time we managed to fit in 2 games.

As is customary, we started with a big game of Black Powder using our 6mm Napoleonic forces.  We also managed a game of Song of Blades and Heroes, using my Robin Hood-themed warbands.  More on that another time.

On with the show: here's a description of the Black Powder game...

In 1809, a large Russian force is approaching a plain which contains the 3 fictional, central European villages of Großrinderheim, Württemfeld and Tauberbischofsberg.  Help (?) is on its way to repel the invaders, in the shape of a mixed force of French and Confederation of the Rhine troops.  The Confederation troops are outnumbered but have a more flexible command structure.  Would that be enough to make a difference?  Oh, the allies also have a lot more artillery than the Russians...

Victory would be determined very simply: each of the 3 villages is an objective.  Whoever holds more villages at the end of the game would be declared the winner.  The game would end either when 1 side were all dead or ran away, or when we ran out of time or energy to continue!

In the past, we have found troops in buildings to be nearly invulnerable under the Black Powder rules.  Since we didn't want this game to stagnate, it had to be at least plausible to assault an occupied village.  To achieve this, we reduced the morale save modifier for troops in houses from +2 to +1 and the combat result bonus from 3 to 2.  Maybe these buildings are wooden rather than stone?  Or maybe our troops haven't read the manuals on the best way to defend such a position?  Who knows?

Most of the troops we used in this battle were fairly standard, with few special rules employed.  However, we wanted to test out the optional rules for Personal Characteristics of Commanders.  We could just have rolled dice for the results and written them down on paper, but I like things to be a bit easier than that.  I've made a deck of cards with a reasonable distribution of these characteristics on them, so all we needed to do was draw one card for each general and brigadier.

The Russian force was made up of 3 identical brigades, each consisting of 4 infantry units, 1 battery of artillery and a unit of (unreliable) Cossacks.
When we assigned characteristics to the Russian commanders, we discovered that the corps commander, Generallieutenant Raevskii, was average but that his subordinates were anything but!  Generalmajor Rylieff was timid and hesitant (!), Generalmajor Pantzerbeiter was decisive (probably an emigre with something to prove, I think...) and Generalmajor Palitsyn was also timid.  OK, this could be interesting...
Totals: 12 infantry, 3 cavalry, 3 artillery units. 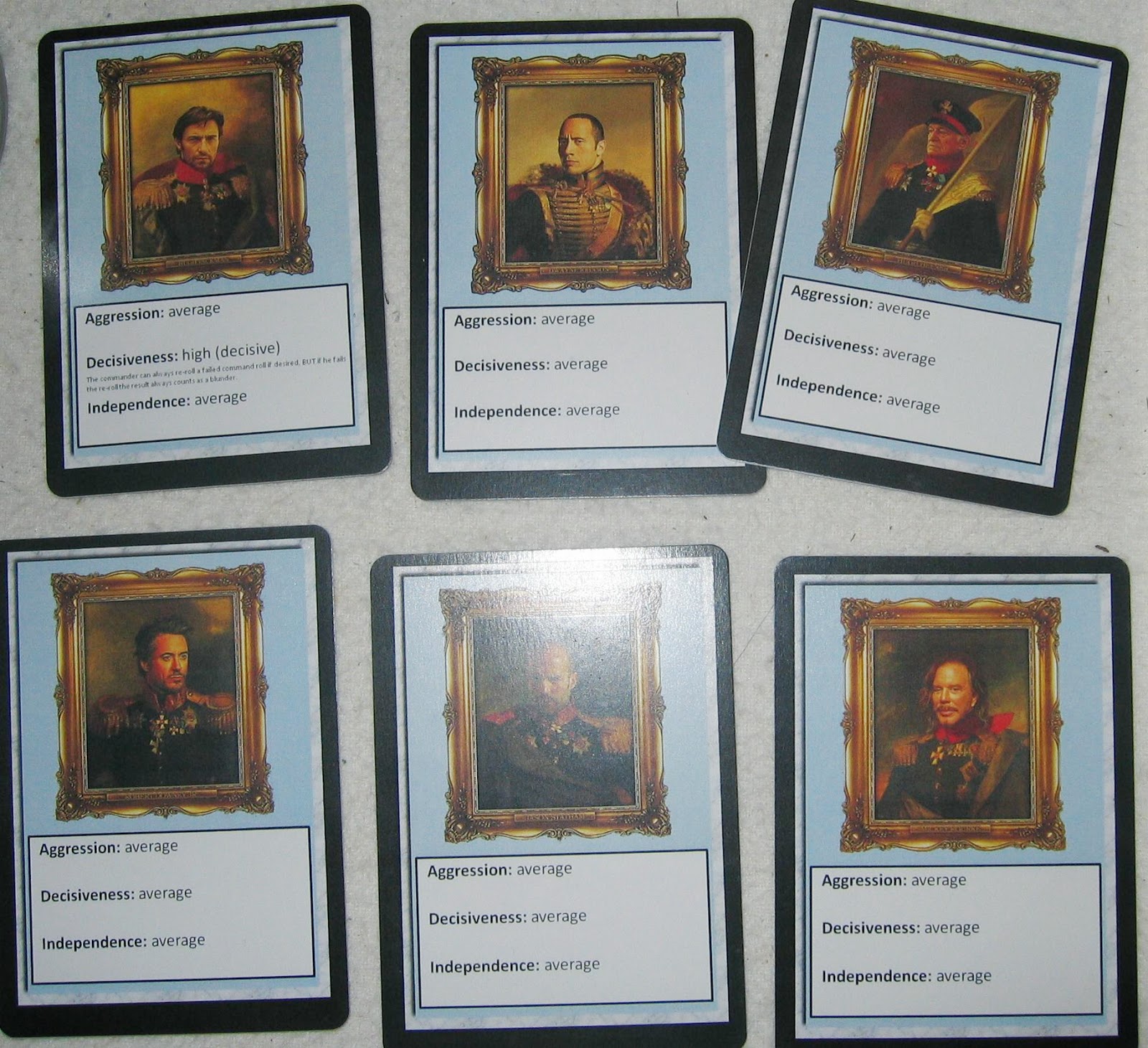 The Confederation had 5 small brigades (1 Bavarian, 2 French, 1 Hesse-Darmstadt and 1 mixed light cavalry).  Each of these typically had 2 units of infantry or cavalry and 1 battery of artillery.
The commander (French general Saint Cyr) was decisive, but all 5 of his brigadiers (Cossons and Dalesme for the French infantry, the Hessian Schiner, Bavarian von Minucci and cavalry commander des Essarts) were all completely bland.  A bit disappointing, perhaps, but I suppose it simplified things.
Totals: 9 infantry (7 normal, 2 small), 2 cavalry, 5 artillery units. 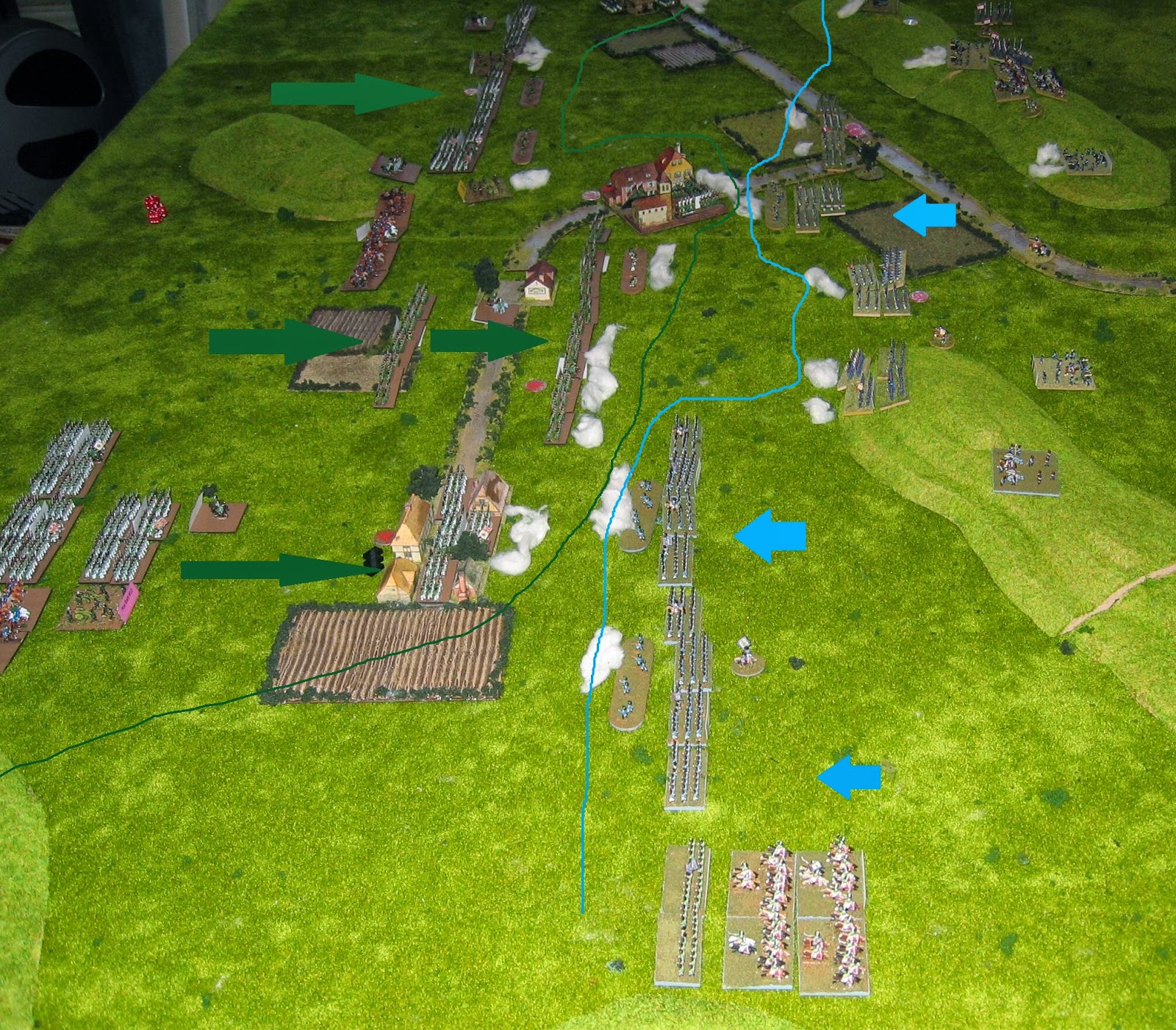 The Russians moved first and immediately force-marched regiments of infantry into all 3 of the villages.  Some of their support forces were a bit slower off the mark, but they were well entrenched in the objectives before the Confederation forces got close.  As the armies approached each other there was an outbreak of firing all along the line, though most was relatively ineffective due to the use of skirmish screens. 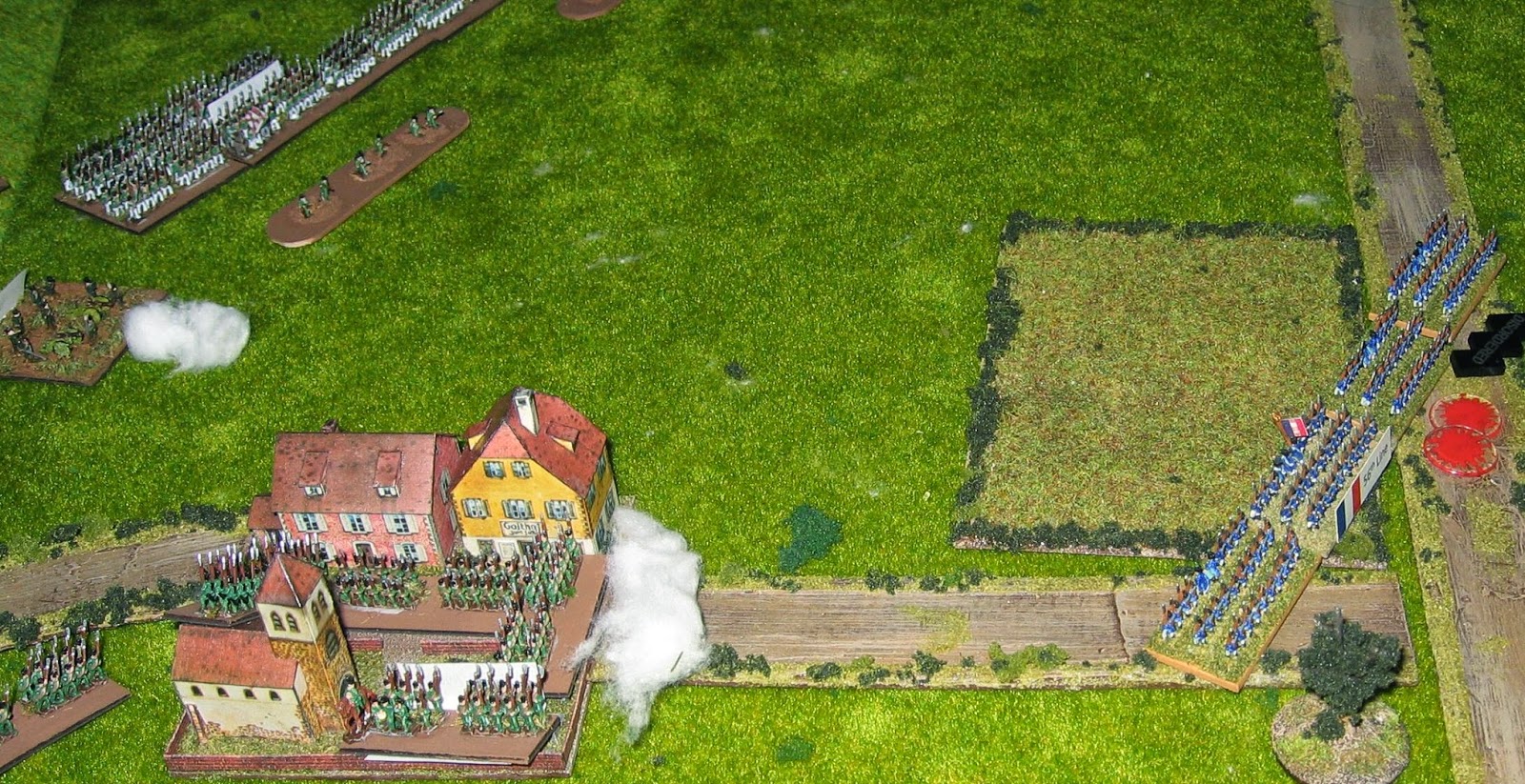 The exceptions to this were in the centre, where the French General Cossons steadfastly kept his infantry in attack columns (without a screen!) and the otherwise professional Dalesme advanced the "Lucky 56th" Ligne into a storm of cannon and musket fire without any support. 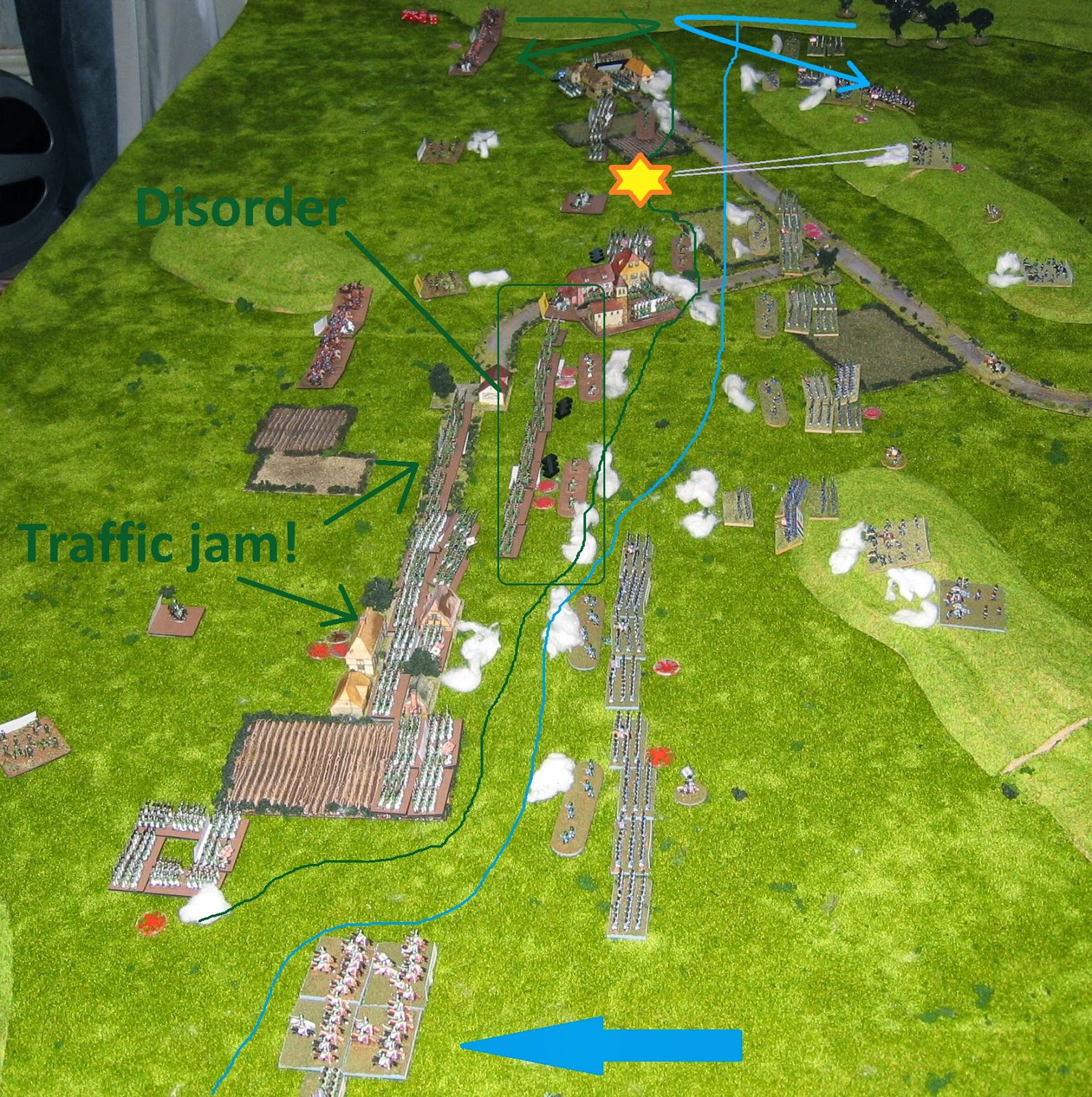 For most of the game, fire was given and taken all along the front line, with the Russian line anchored in the 3 villages and the Confederation just beyond them.  Rather than bore you with a turn by turn account, here are the highlights: 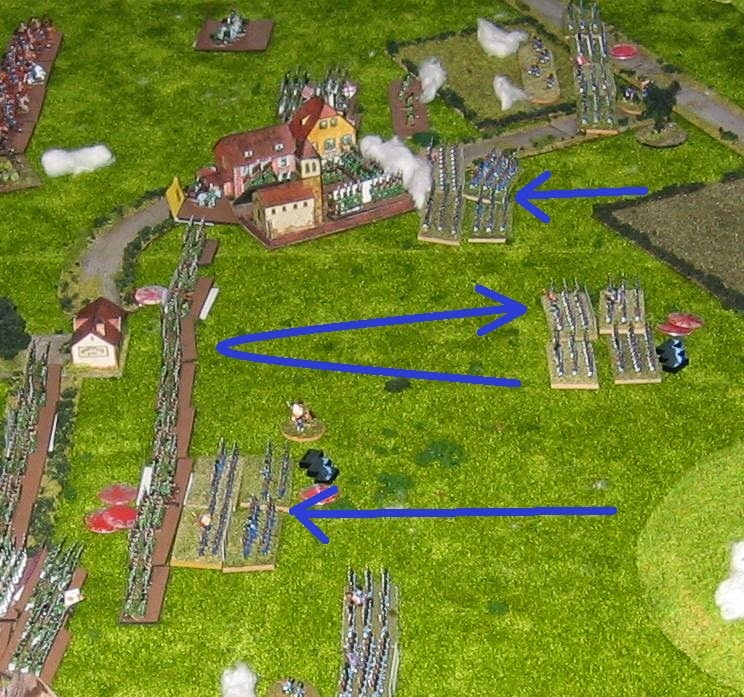 Seeing the Russian centre apparently in disorder, General Cossons ordered his columns to attack.  With banners waving and shouts of "Vive L'Empereur!", the 24th Légère and 44th Ligne regiments marched in double time towards their enemies.  At the last moment, the columns broke into a run and crashed into the confused Russians.  At the same time, General Dalesme's 4th Ligne made a diversionary attack on the village of Württemfeld, fully expecting to withdraw after distracting the defenders from the fight to their flanks.

Disoriented the Russians may have been, but they were going nowhere!  2 of the attacks stalled and halted in stalemates, whilst the 44th Ligne was repulsed in disorder.  Oh, crumbs! 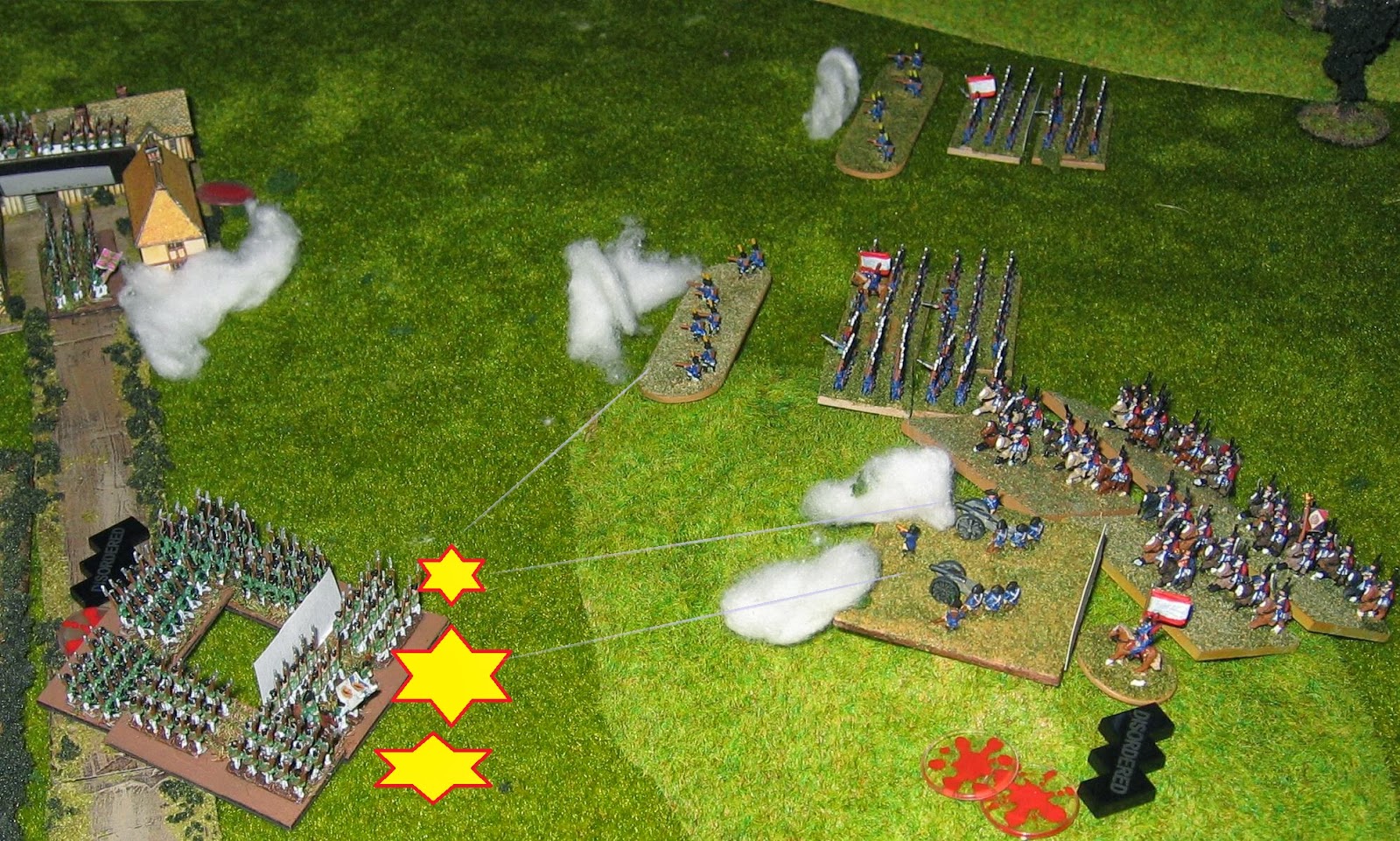 Near Tauberbischofsberg in the north, a single Russian regiment attempted to close with some of the artillery that had been galling them all through the game.  This was a small but bad mistake; the nearby French cavalry made several fake charges to force the attacking infantry into a square.  As soon as this happened, the Hessian artillery and skirmishers set about the poor Russians with a vengeance.
All the square could do was hold on and pray for deliverance; if they moved then the hussars would have been on them in a flash and if they didn't then they would be pummelled with cannister from the cannons.  A unit of Cossacks attempted to charge the guns to relieve their infantry, but these light cavalry refused to charge home and withdrew after taking a few losses. 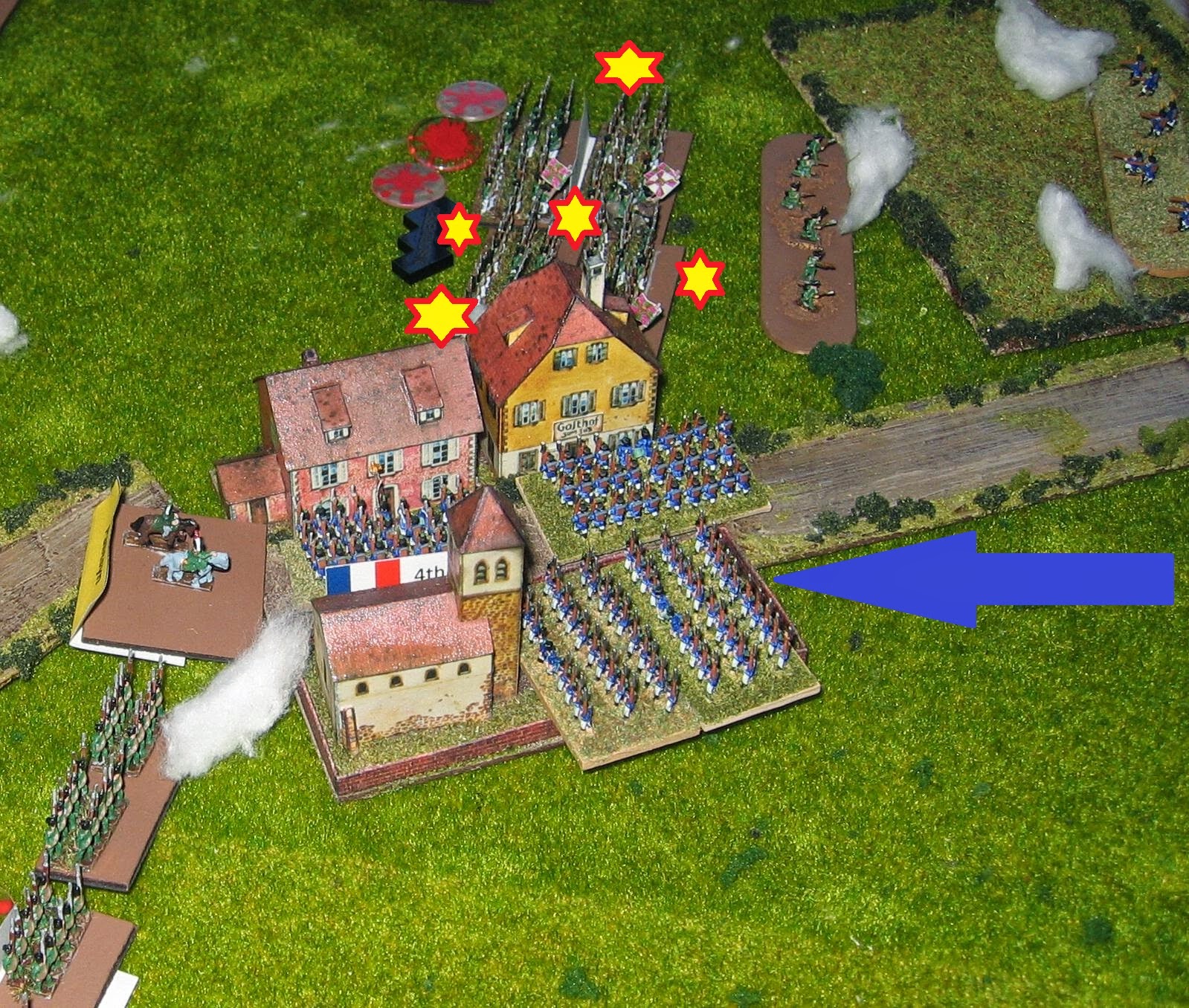 In a completely unexpected turn of events, the next round of the 4th Ligne's diversionary attack on the central village succeeded in eliminating the defenders with no real loss to the attacking regiment.  The French soldiers quickly occupied the objective and then poured a thunderous enfilading volley on the unsuspecting Russian regiment at the far side. 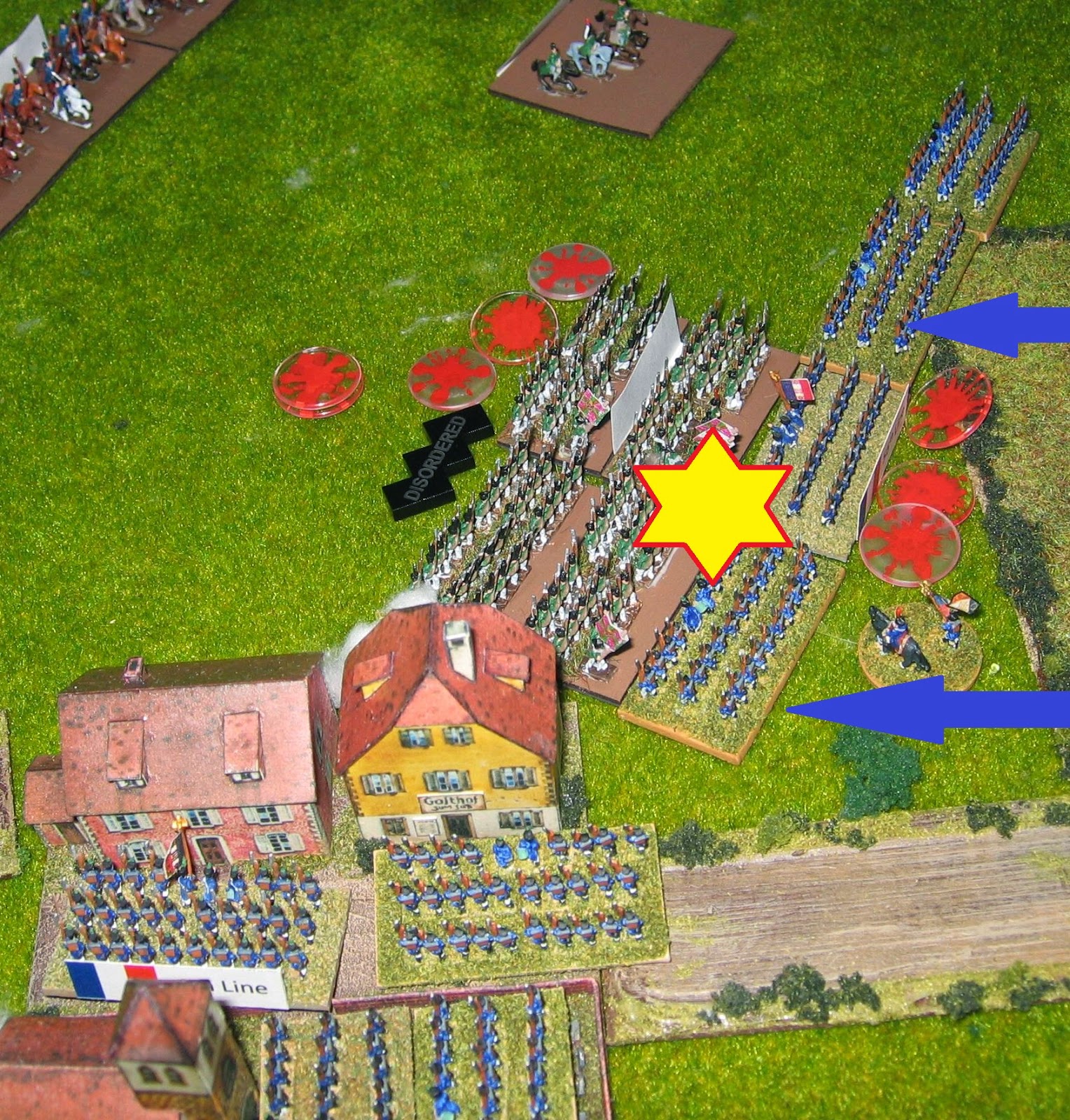 Seeing this, the nearby "Lucky 56th" Ligne charged at the wavering Russian unit.  In a tremendous crash, both regiments just disintegrated, leaving whoever was left alive streaming from the field.

Suddenly, it was all over.  The Russians had lost 3 regiments completely, but enough of their other units were shaken for 2 of the 3 brigades to now count as broken.  Since most of the brigades in the army were broken, the entire army was broken.  This came as a complete shock to both players, I think!

Rather than play out the rest of the game, we decided to allow the defeated Russian army to retire in (relatively) good order.  No doubt the small numbers of Confederation cavalry and the ever present Cossacks would have prevented a close pursuit and a total rout.

Well, that was unexpected!  Most of the Confederation units had taken some hits, but were still in good shape.  The Russian infantry never really got going; their superior numbers (especially in the south!) couldn't be brought to bear because of a mixture of hesitant leadership from General Rylieff and frequent disorder in the front lines.

Heroes of the hour were the Confederation artillery: the guns lined the ridges and pounded away on the masses of infantry below.  Some counter-battery fire from the few Russian cannons to get into action had done a lot of damage, but not enough to silence their enemies.

The cards for leaders' characteristics seemed to work well.  We found that most of the time the characteristics didn't have much influence on play, though just occasionally they made a critical moment more ... interesting!  That's as it should be.  Having the cards laid out made it easier to remember which commanders had these special rules.  It also brought a more personal touch to the game: the officers had both names and portraits (even if the pictures are technically all in Russian uniforms!)

Finally, next time I think the Confederation should take fewer brigades, but with more regiments in each one.  5 sub-commanders is really a bit too many!
Posted by Colgar6 at 21:01