It's the 4th and final week of Zomtober 2014, so I'm going to present another in my series of "duels" between a single survivor and a single zombie.  Rather than just launching into the models, here's a little background:

Iggy was a small, drab man who was not very successful in life.  He always felt that this was because everyone and everything had been unfair to him since the day he was born.  He'd had a hard time at school and until recently his boss had bullied him at work.  But since the plague had broken out, he'd not seen anyone else, including any of his detested colleagues.  The shops were shut, buses weren't running and even the phone lines were dead.

For once, there was no-one nearby to tell Iggy what to do or to tell him what was "appropriate".  He could please himself - and what he wanted to do most was to burn things!  There was nothing wrong with the world that couldn't be put right with some fire.  All the misery, all the sickness in the city would be cleansed by the purifying, noble flames.  He'd just have some fun to start with: a can of petrol and some bottles would do nicely... 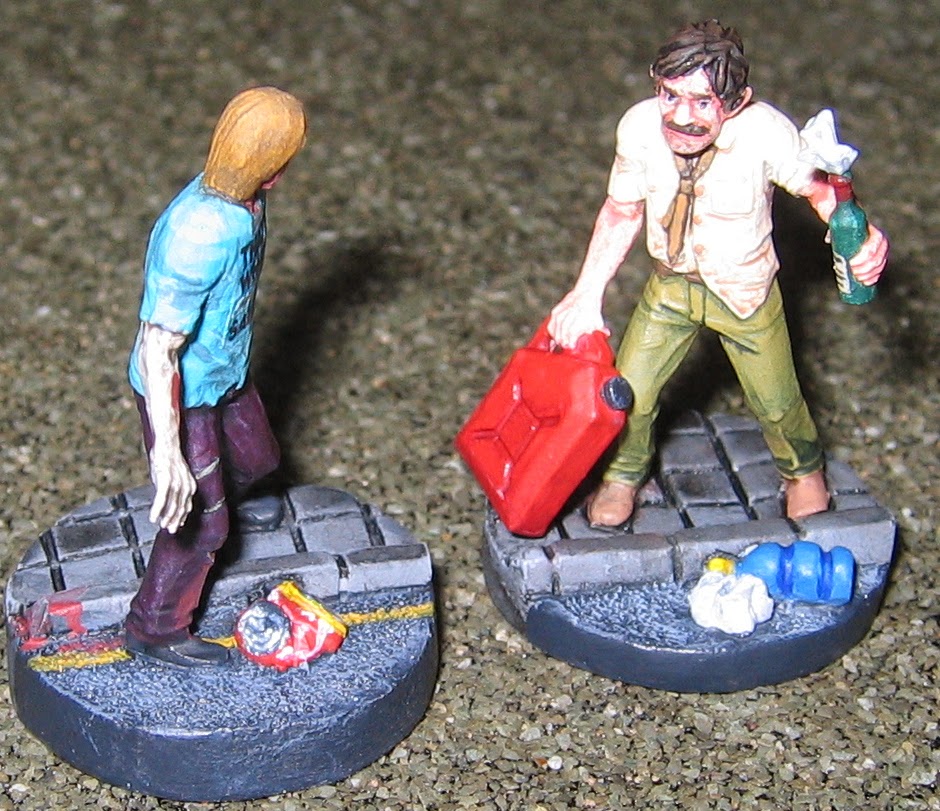 I don't think that Iggy is looking where he's going properly.  He's in his own dream world and hasn't noticed the zombie that's right beside him.  Also, Iggy might have found it easier to use a backpack or something to hold all his kit, as he seems to have too much in his hands: he's dropping things. 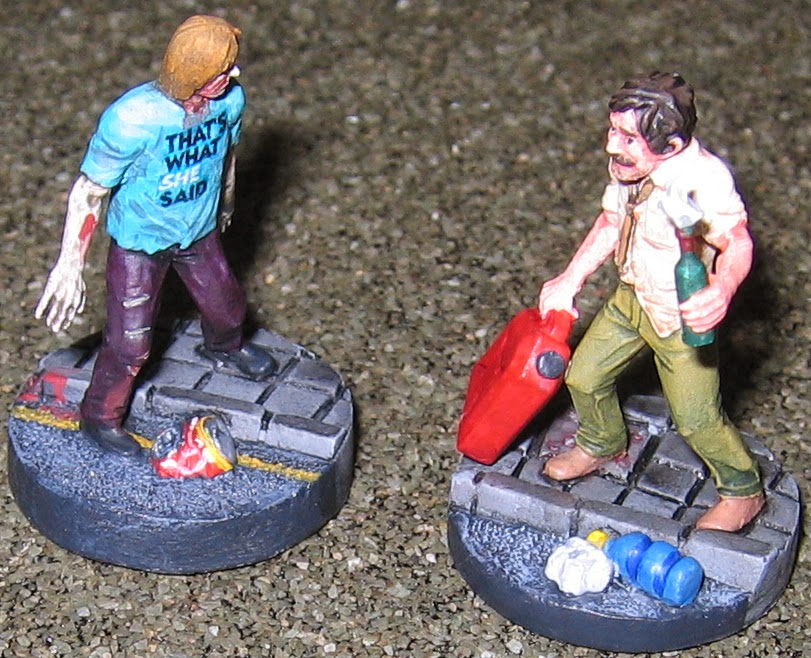 The zombie is a straightforward Studio Miniatures plastic zombie, though I've used one of my tee shirt decals to decorate him.  I made a bit of a mess of this one: the coloured background was hard to match with paint for the rest of the shirt.  Also paint seeped under the decal, blurring the white lettering.  I had to twist the zombies left leg a bit to get him to stand straddling the kerb (i.e. with one foot on a higher surface than the other), but I think this looks all right.

Iggy is made from the body and arm of a Studio Miniatures plastic zombie.  The other arm (holding the Molotov cocktail) comes from a Wargames Factory survivor kit.  The slightly over-sized head is from a Gripping Beast Dark Age warrior.  The jerry-can is a metal casting from some vehicle accessories sprue, possibly from the old VOID range. 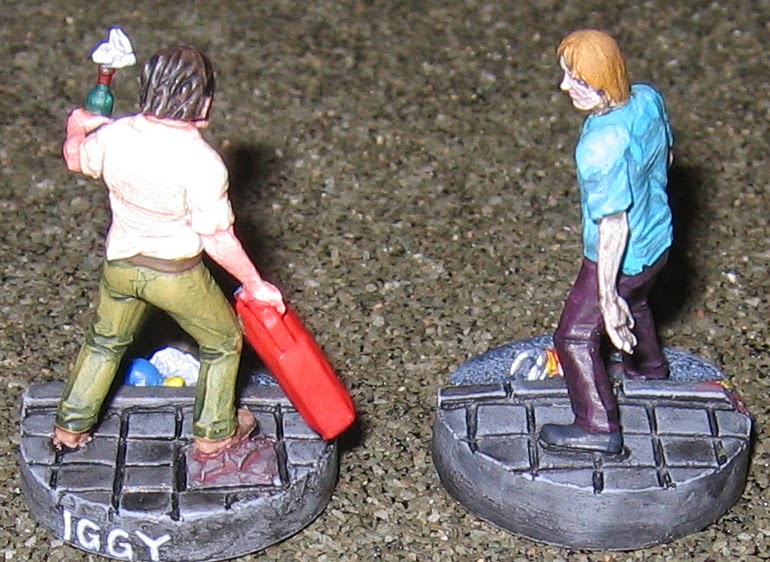 Like many of my recent figures, both of these models make use of resin bases from Escenorama.  I've mentioned before that the heights of these are a bit uneven and that can be seen easily here.  Iggy's base has been shortened with a razor saw by perhaps 1.5mm .  However, the zombie's base was merely sanded smooth - I built him some time earlier in the month before I decided that some of these bases were really too tall for my liking.

I've enjoyed greatly making these models for Zomtober 2014.  Without the spur of this joint enterprise and the encouragement from all the other participants and from the spectators, I doubt that I'd have built any of the figures I've shown over the last 4 weeks.  Indeed, I've also completed several further survivors and zombies that haven't been so suitable for a "duel".  So, in theory I should have more space on my workbench as these models (some of which have been sitting there, partly built, for a long time!) are moved off it.  In practice, of course, that bench space has already been filled (and more) by other projects.  Ah, well!

So, who will win this duel?  Well, I cannot see Iggy coming out of it alive!.  Either he finds his matches or lighter in a hurry or he doesn't.  If it's the former then I suspect that both Iggy and the zombie will be burnt to a crisp - not because he desires it, but simply because fire really isn't a good close range weapon!  If Iggy doesn't find his matches then the zombie won't have any difficulty in killing him, though if there's a struggle and the can is spilt then the zed might find that fuel-soaked flesh doesn't taste very good.
Posted by Colgar6 at 14:14