As I'm sure you're all aware by now, I've been posting a series of model "duels" for Zomtober 2014.  Each duel consisted of one zombie and one survivor, often with matching elements on the bases to tie the pair together.  However, I've also used my enthusiasm for the month's challenge to finish off some other models that were lying around on my workbench.  Here are some of the figures that just didn't fit into a duel, perhaps because I didn't have a matching opponent or perhaps because I just couldn't see the story behind any such confrontation.

The first and the last figures are recent builds; they're on resin bases by Escenorama.  Note that the zombie isn't alone: there's an arm reaching out of the displaced manhole cover beneath him.  It's not clear whether this belongs to one more zombie, or whether the sewers are full of them! 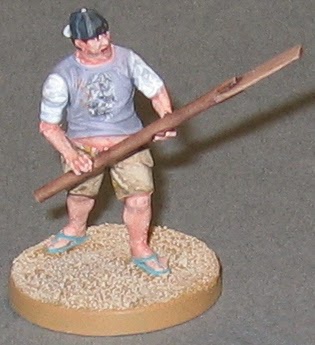 My last model for tonight is not completed, but I have a reason for showing him anyway.  He's a somewhat overweight survivor who is dressed for the beach with shorts, a tee shirt and flip-flops.  However even if he doesn't have much else going for him, this man is wielding a solid oar in both hands.  I don't think the zombies will find him an easy target! 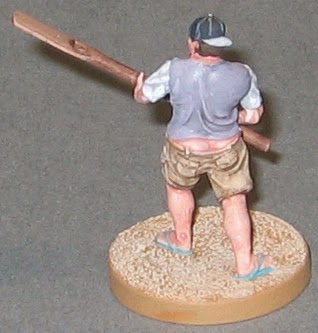 I still need to paint his belt; I think all other details have been done, but I could have missed something.  Also, I need to give this chap a name.  So here's the deal: what should I call him?  Please make as many suggestions as you like and I'll choose the one I like best.  I'd prefer either a first name or a nickname rather than a surname (and nothing too obvious, such as Juan, please!)  You have until Sunday next!
Posted by Colgar6 at 20:06