Mystery Inc and the Spooky Forest!

It's the end of October and I haven't put on a Halloween game for 2 years (global pandemic, you know...).  Since my local club is now meeting again, it is time for a special event!

This year, I arranged a 4-player game using the Fear and Faith rules from Ganesha Games.  These are a version of the popular Song of Blades and heroes engine, adapted for horror (Gothic through to modern).  Without further ado, on to the report...

These characters shouldn't need much introduction, I think.  Their stats are taken directly from the "not Mystery Inc" characters in the Kooky Teenage Monster Hunters supplement to Fear and Faith:

For reasons best known to themselves, the girl guides have camped in the middle of a gloomy, swampy forest.  They have several extremely competent ex-guides along as camp helpers and a surprisingly large assortment of weaponry.  Maybe this is preparation for their "Monster Hunting" badge?

So, the gloomy forest is haunted.  Who saw that coming?

Note that these characters cannot harm any humans in combat (because they are immaterial), although the warlock can cast damaging spells.  Instead, they use Fear to try to scare away the humans.

Equally, they are immune to physical attacks from the good side (though Fred & Velma both have the conviction ability and Brown Owl can lead a "spiritual prayer" - some form of girl guide chant, I imagine -  both of which could destroy such spectres).

The Children of the Fields

It seems that the curse of the forest has spread to nearby farmland as well.  A sinister individual has animated a number of terrors and brought them to aid in chasing off the humans.
Being mostly zombies, this force is slow, but very hard to destroy.  You can knock them down all you like; they'll just get back up again.  Mostly. 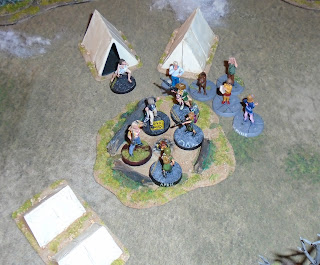 There are 6 objectives scattered around the table, all in different directions from the centre. 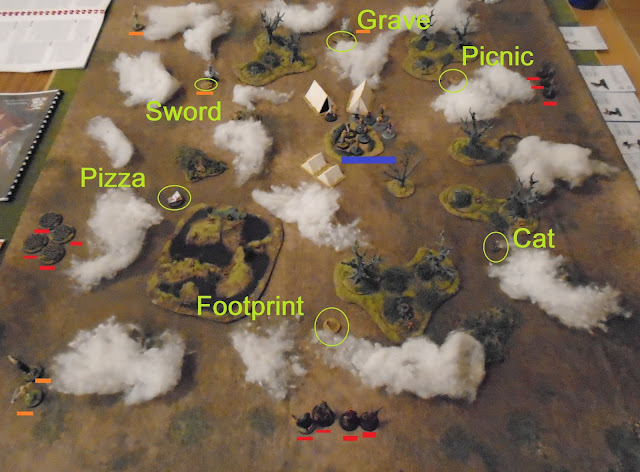 It takes a (human) character one action to investigate an objective:

The humans win by picking up all the clues and then having the clue-holders meet together (in the centre?) to work out how to stop the monsters permanently (i.e by revealing the hidden projectors, taking off the villain's rubber mask, performing an exorcism or whatever...).

The monsters win by knocking out or scaring off all the humans.

Mystery Inc were very active right from the start.  They split up and looked for clues: 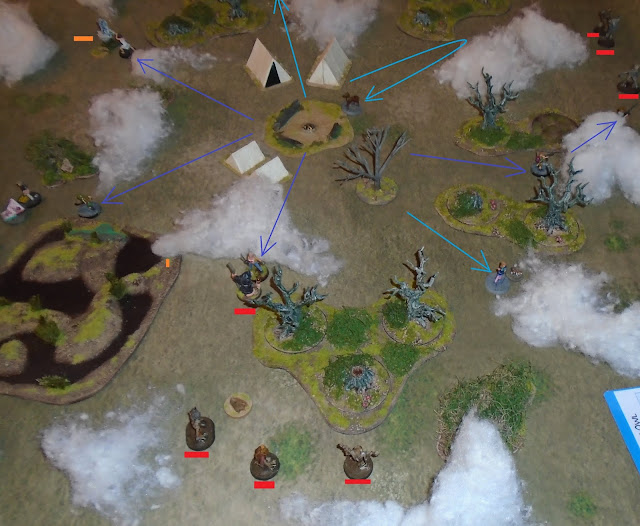 The girl guides also scattered in every direction: 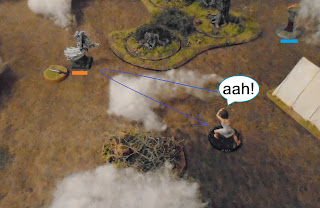 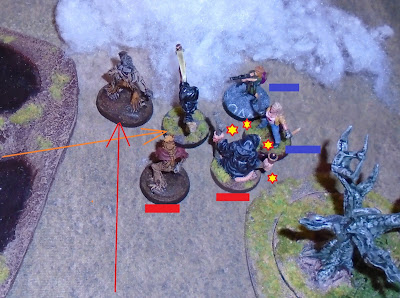 The fight between Barbara and Mister Wurzel grew as other models from both sides approached.  Most significantly, the Night Wraith joined Mister Wurzel and between them the two warlocks threw curse after curse at the chosen one.  However, neither transfix spells nor lightning bolts had any effect; Barbara just shrugged them all off. 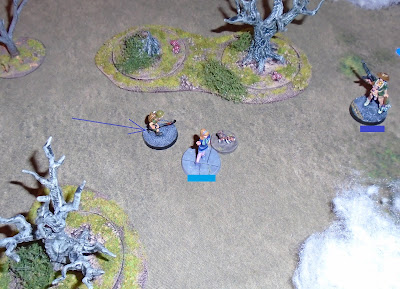 Daphne finally managed to grab the lost cat, though only when April came to help.  It was a real clue, so Mystery Inc had now found two of the three necessary items to solve the puzzle! 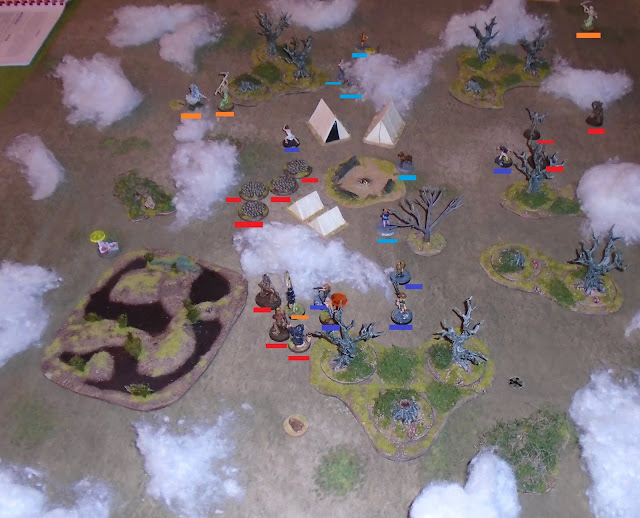 On the whole, the monsters were finding it hard to move their followers.  The scarecrows were unmotivated and slow, but one of the ghosts suffered a teleport disaster; it ended up in the far corner of the table.

At least the rat swarms were finally on the move, read to invade the campsite. 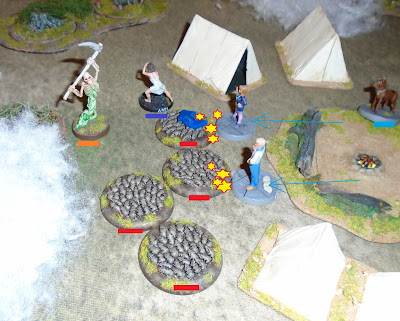 Seeing the danger, Fred and Daphne rushed over and attacked the rodent horde.  It turns out that the rats weren't as tough as might have been thought; they were easily scattered (i.e. "knocked down").  Before they could regroup, the humans destroyed half of the swarm (and yes, Daphne's killer heels did exactly that). 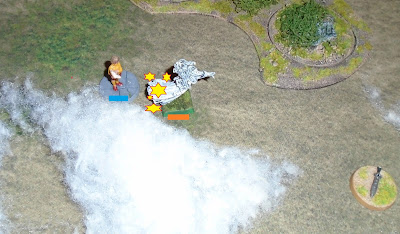 Meanwhile, Velma had been left a bit shaky after encountering the second banshee (i.e. one roll on the Insanity table).  Despite this, she rallied, stepped forward and disproved the apparition through the force of science - whereupon it vanished for good. 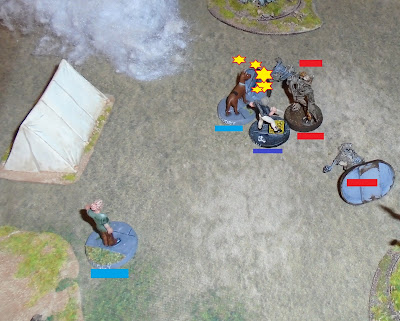 In their milling around, Scooby and Shaggy had become separated.  The former now found himself beside Sarah, manfully (womanfully and dogfully?) fighting a pair of scarecrows.  To everyone's amazement, Scooby knocked down his opponent and then destroyed it.  Personally, I think he caught his leg in the scarecrow's clothing and then ripped it apart as he turned to flee... 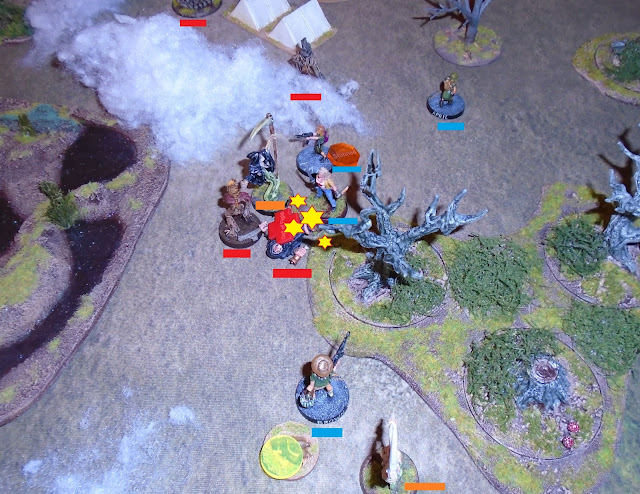 In the long-running fight near the swamp, May had been transfixed by a stray spell.  The poor little girl was rooted to the spot, unable to move for fear of the Night Wraith.

Things seemed to be looking up for the humans though: the chosen one finally chopped the head off Mister Wurzel, sending the heap of ragged clothes tumbling to the ground, dead. 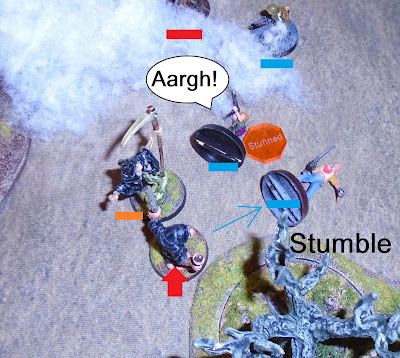 ...or was he dead?  Mister Wurzel rose from the mist, as whole as before (that's the hard to kill ability; it was triggered almost immediately by a nearby ghost scaring Brown Owl just out of picture).

The sight was too much for May; she collapsed in a faint and was out of the game.  Even Barbara stumbled back in shock and tripped over a tree root. 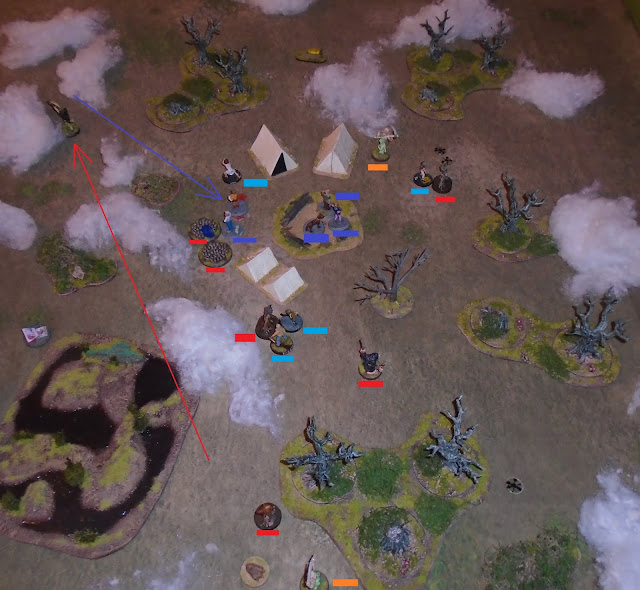 However, this was too little, too late for the monster side.  Having destroyed the guardian banshee, Velma recovered the ancient sword clue.  In the last turn of the game (because we had to pack up), she ran for the campfire where Scooby and Daphne were waiting with the other two clues.  She needed three move actions to make it in a single turn, but only rolled two successes and came up a little bit short.

So, who won?  If we had time for another turn, it was almost certain that Velma would have made it into the centre, thus completing all the clues and winning the game.  There was really nothing the monsters could have done to stop her.

In the end, both monster forces (the ghosts and the scarecrows & rats) had lost about half their models.  Against this, the humans only lost May, though Ann was pretty much a gibbering wreck and even Velma was feeling a bit "wobbly".  Can the monsters claim a moral victory for delaying the humans so much that time ran out?  Perhaps, perhaps not.

This scenario was designed to make the humans split up; it worked admirably in that respect.

I'm also pleased with the force compositions.  In particular, the ghosts were intended to be an unconventional threat, using fear as their main effect.  This seemed more appropriate than physical violence in a "Scooby Doo" game.  I think it all worked very well in the end.

See you next Halloween!