Another Sunday in October; it must mean I need to produce another Zomtober post.  My usual format is to suggest a duel between two of my recently-painted models.  I see no reason to break with this tradition of mine, so here we go... 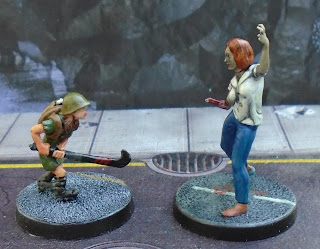 Today's confrontation is between April, a girl guide/girl scout (depending on which side of the Atlantic dominates your use of the English language) and "smart casual zombie" (hereafter SCZ). 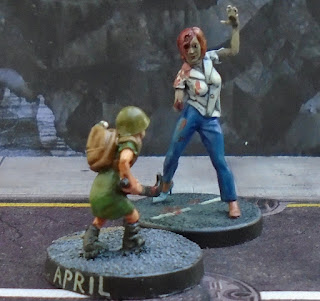 April is young and small, but she does seem to be well-prepared.  She has a hockey stick for offense, a helmet for defense and a backpack for supplies.  It's not completely obvious, but I think there's a molotov cocktail sticking out of the corner of her pack, so April has a backup weapon if she chooses.  Mind you, firebombs are often regarded as having poor performance against zombies, so maybe April is showing a little inexperience here? 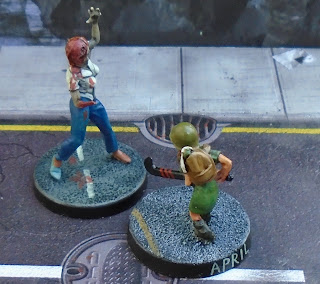 SCZ was a smartly-dressed young woman, but as a zombie she has suffered a bit.  She's lost a shoe (which probably isn't much of an issue for her now), is missing part of one arm and has a bad scalp wound.  Does this damage lessen the threat from the zombie?  I don't know. 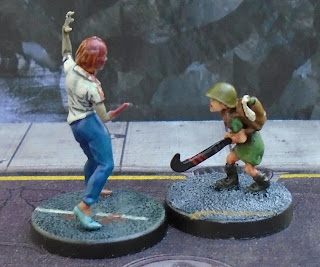 April is another of the set of Girl Scouts that I mentioned in last week's episode.  She's a metal model and possibly my favourite of the entire pack. 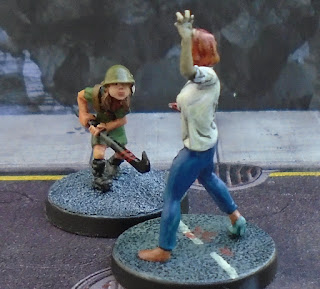 SCZ is built from the old Wargames Factory "Zombie Vixens" set.  I still have maybe enough parts to build one third of the figures in this set, so it should keep me going for a while yet.

So, as ever, what happens next?  April has a look of gritted determination and seems to be determined to attack SCZ.  Is her plan to hook the zombie's legs from under it with the hockey stick and then bash its head with the same?  Or is she just trying to fend off the zombie, perhaps so that she can run past it?  Or maybe the helmet has fallen over her eyes and she hasn't even seen the zombie?

If fit and healthy, I think that SCZ would be more than a match for April, however confident the little girl might feel.  But the zombie is somewhat damaged.  Does this alter the balance here - and if so then by how much?

Please share your thoughts in the comments section below.  We need to know how this ends!