Another October Sunday, another Zomtober duel - you should understand the format by now, I hope... 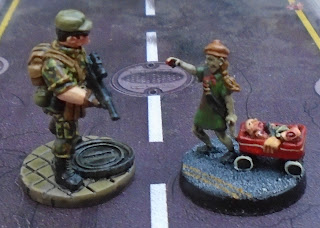 Today's encounter is between Stewie and "Girl Guide zombie with cart" ("GGZC" hereafter),  On the face of it, Stewie looks like a soldier but in my mind he is an "urban militiaman".  In other words, a self-appointed guardian of truth, justice and apple pie (as long as these concepts don't clash with his own prejudices). 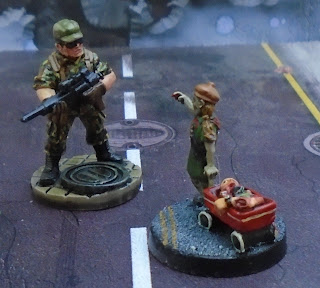 I think that Stewie has come onto the streets, heavily armed, intending to face off against communists, hippies or some other existential threat.  Instead he has come across a rather pathetic, sick little girl - who is dragging a toy cart full of unsold packets of biscuits and a few body parts. 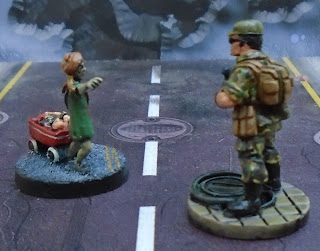 In this situation, Stewie is confused.  He's staring vacantly into the distance (I assume - it's hard to tell when he's wearing dark shades) and trying to work out what is the right thing to do.  Meanwhile, the zombie is inching ever closer to him. 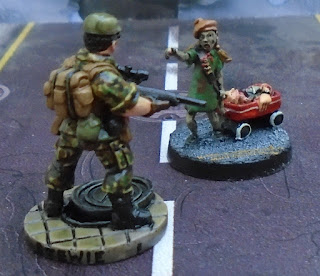 The model for Stewie is one of  the figures from Wargames Foundry's Backstreet Militia pack.  He is mounted on an Escenorama resin base (I've almost finished the large pack of these I bought cheap several years ago).

GGZC is from a range of figures currently sold by Dragon Bait Miniatures (though I'm almost positive that I obtained mine from somewhere else, probably quite a long time ago).  She's fixed on a simple disk base that has then been covered in sand & painted.

I've laid out my thoughts on this encounter above, but somehow it doesn't seem totally convincing.  The zombie is well enough, but what about Stewie?  He's just standing there as if nothing was happening.  Is he all right?  Maybe he's listening to a radio earpiece and has forgotten to look down?  Maybe his shades are so dark that he cannot see properly?  Please, help me out here!

If you're interested in Week 5 then go this way ==>