The remnants of the wedding party licked their wounds back at the sheltered housing where Albert and Gertrude lived (see The search for Gramps and Nanna for part 1).  They described what had happened to the caretaker, Chad and his brother Bomber, whilst Darcy and Lizzie tended to the injured wolfhound, Clancy.  The few TV channels that were still broadcasting showed scenes of increasing lawlessness and all the phones were dead.  Then, the power went out.
"Right" said Bomber.  "That's it.  We've got to get some weapons!  I'm not going to be helpless when they come for us."
"Yeah!" replied Chad.  "There's a gun shop over in Eastborough.  They'll have something."
Lizzie considered this.  "Um, don't you have to wait for several weeks to get a gun, or something like that?".
"I'm sure they'll make an exception for us" claimed Bomber.  "I'll go fetch my bat".  Chad followed him out, heading towards his own flat.
"Eastborough isn't a nice area even at the best of times" mused Gertrude.  "Go with them John, please.  I'm afraid that those two young men are going to get into trouble."
"Who is coming for us?" said Albert.  "Will they be bringing my medicine?  I'm 84, you know." 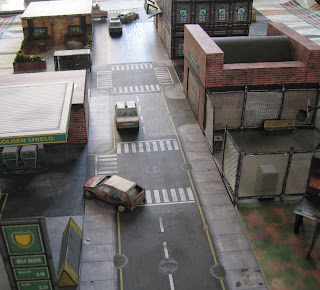 "Bob's Bargain Bullets" is the gun shop in Eastborough.  It's at the far end of the street, on the right.  All that John, Chad and Bomber have to do is walk along the road past the basketball court and the petrol station, past the garage and the lockups, past the adult bookstore and the memorial park - and they'll be there.  And who knows, the shop might still be open!
The streets are deserted; nothing is moving.  There are a couple of wrecked cars in sight.  One of these has clearly been a recent accident; both an ambulance and a police car are at the scene.  However there is no sign of any emergency workers, or indeed of anyone else. 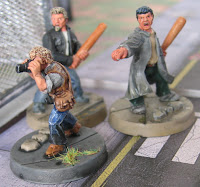 The intrepid trio made their way part way down the road, about level with the basketball court.  Here they paused for a while (for something like 4 or the first 6 turns, the activation dice were doubles.  The number of PEFs - Possible Enemy Forces - hiding off side streets was enormous!).  "Something's wrong" said John.  "We should get out of here".
"Quit your moaning, you wuss!  I'm going to get me a gun." taunted Chad.

As they passed the abandoned pizza delivery car, there was a rustle from behind the garage.  2 of the PEFs moved round the corner into full view, but resolved as false alarms.  Just small pieces of rubbish being blown in the wind, or mice, or something like that.  The party wasn't really paying attention to these because at the same moment, a young woman with a pistol came out of the park further up the street (Nancy: REP 3 hostile ganger). 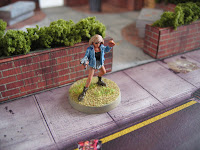 She looked very surprised to see them and while John and Chad immediately ducked behind the pizza car, Bomber and Nancy stood and stared at each other.  She regained her wits first and called out "Hey, we've got company!".  3 more gangers ("Jasmine": REP 4 with BA pistol and 2 REP 3 with SMG) came round the corner of the game store.  They had been looting the ambulance, trying to set fire to the buildings and doing other antisocial things that amuse young punks. 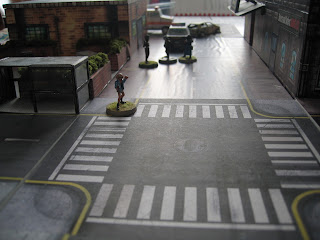 "Run!" shouted John to his companions as he turned and fled round the corner of the basketball court.  Bomber was a little slow to react, but followed anyway.  Chad said "Hang on, guys.  We can take them!"  He stood for a moment, but turned to flee when he realised that his companions had already gone.

John and Bomber paused for breath in the woods on the other side of the garage.  "Where's Chad?" asked John.  Bomber looked confused.  "Shit!  He was right behind me, I thought.  Perhaps he went a different way to try to draw off those punks?"

The truth wasn't as kindly.  Chad was too slow to flee.  As the gang advanced to the crossroads, they opened fire with everything they had.  Although it was mostly "spray and pray" shooting, they put enough bullets in the air that he was cut down, obviously dead. 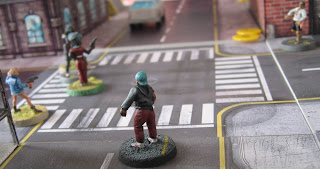 The noise attracted 2 zombies, who started to close in on the gang.  However, the shambling undead didn't even get close!  For several turns, the group of gangers at the crossroads gunned down everything they saw with massive firepower.  "Is that all you got?  Bring it on - WE'RE DA KINGS!" screamed their leader as they shot time and time again.  Each turn, a couple more zombies would appear, only to be gunned down immediately. 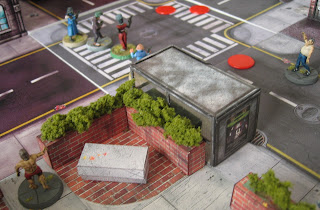 Fortunately for John and Bomber, they were too far away to be involved in the gang's fight.  They were trying to find a way through the woods at the other side of the garage, so as to approach the back door of the gun shop. As they came to the edge of the woods, they walked straight into yet another ganger ("Candy" REP 5 with pistol).

Candy was too fast for the guys and immediately snapped off several shots at them.  Although one was very close indeed, these all missed.  John shouted "GET HER!" and leapt for the woman.  Bomber hesitated for only a moment before he also charged, brandishing his baseball bat.  As she fell to the pavement beneath their combined weight, her head hit the concrete with a crack, obviously dead.  John scooped her pistol up from where it had fallen and the pair proceeded across the street to the back of the gun store.  (Although this happened in sight of the other 4 gangers, it was a city block away and they were preoccupied with their own fight.  I ruled that they didn't really notice or react to what had happened). 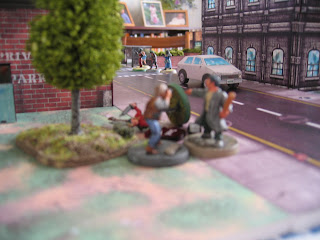 John and Bomber sidled along the alley at the back of the gun shop and tried the rear door.  It was firmly locked; there was no sign that anyone was inside.  "Please, let us in!  We're here to buy!" called Bomber, but there was no response.  The pair briefly considered trying to break the door down, but it was obviously made to deter all but the most well-equipped burglars.  Almost certainly it would be impervious to anything short of an oxyacetylene cutter.  "Crap!" Bomber exclaimed, as the futility of their mission sunk in.  "Let's get out of here before that gang finds us!" 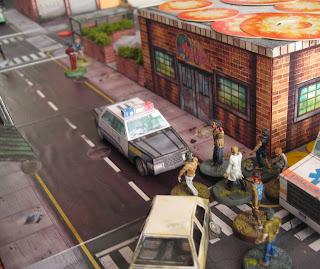 Even as he said this, a number of things were happening on the other side of the building.  Firstly, the run-down games shop burst into flames.  Maybe the juvenile gang had been trying to torch the place when they were interrupted?  If so then their efforts were rewarded now!

Almost immediately after the fire broke out, a horde of zombies came round the corner - no doubt these were attracted by all the commotion. 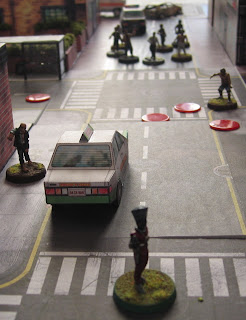 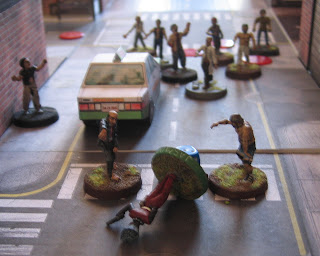 The gang members took one look at the approaching mass and fled.  Oddly, the REP4 Jasmine fell seriously behind the REP3 others - perhaps she had a problem with a shoelace, or maybe she didn't appreciate the danger as keenly as her fellows.  Either way, she had only run a short way before the mob caught up with her and tore her limb from limb in a grisly feast.  The other gangers vanished into the neighbourhood (off the board), safe for now but thoroughly shaken! 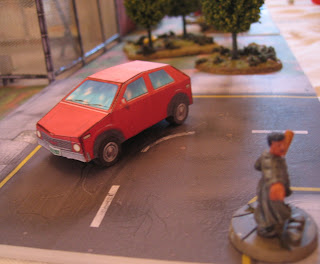 Meanwhile, John and Bomber made their way safely along the back alley, through the woods and off the map.  The zombie horde was too busy feasting to pay much attention and in any case the guys couldn't be seen very well through the basketball court.  They returned to their temporary headquarters, despondent at their disaster of a shopping trip.  They still didn't know what had happened to Chad, but they feared the worst.  On the bright side, John now had the pistol that he had taken from Candy!