It seems that some of my family have become interested in ATZ, at least to the extent of wishing to see their games made public via this blog.  My brother visited us this weekend, so we played another game in my campaign series.  I'm not at all sure that we can or will maintain this rate, but for now, here it is...

"But officer, our homes are over there!" Bomber explained to the cop.  He, John and Terry had been out on a walk into a neighbouring district to look for food, only to discover when attempting to return that the police had cordoned off the area.  There were roadblocks on all the streets and no-one was being allowed in or out.
"I'm sorry" replied the policeman.  "Please go back the way you came.  Our orders are clear: you may not pass!"
John tugged at Bomber's sleeve.  "Come on" he said.  Then, more quietly "There may be somewhere else where the cordon isn't so well established.  We might be able to get through there..." 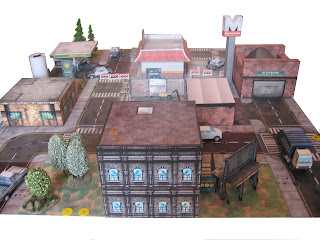 The police have set up roadblocks across the far end of the game board.  John, Bomber and Terry have to get past in order to return home.  Of course, they're not the only ones with the same idea.
There are several PEFs (possible enemy forces) on the edges of the map and more may appear as the game progresses; the players can choose any one to be their group of characters...

John and Bomber chose to approach the abandoned garbage truck, whilst Terry investigated the garage a little further on.  "Hey!" called Bomber.  "Someone left the keys in this one!  Do you think it still goes?  Maybe we could use it to crash through the roadblock?"
"Um, I don't know" replied John.  "I was hoping for something a little lower profile.  I don't really want the cops to be shooting at me or chasing us.  Let's see if we can find another way first; we'll come back to this if we need to." 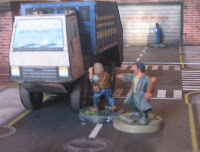 Terry signaled urgently to them and mimed lifting up the garage door.  "What's up with him?" queried Bomber.
"I think that garage is unlocked.  Perhaps we could find a way through there" answered John. 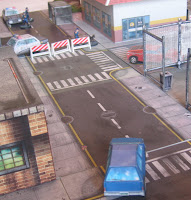 As the party investigated the eastern side of the map, a small blue car came from the south-west.  It contained 3 teenagers; when the driver saw the police roadblock, she hesitated.  Then, egged on by her friends, she accelerated and drove straight at it in an attempt to break through.  Most of the cops just stood and waved at her to stop, but when it became obvious that she had no intention of doing so then officer Starsky fired his shotgun at the vehicle.  He blew out the windscreen and severely wounded the driver; the car slid to a halt in a mess of barriers. 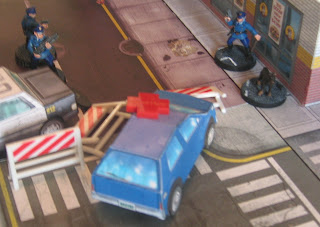 Within moments, the vehicle was surrounded by angry policemen.  "Get out of the car!  Now!" Starsky yelled at the 2 passengers.  "Dalgliesh - call for an ambulance!" 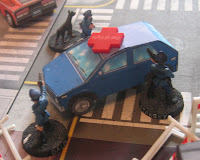 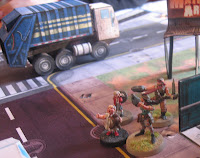 While the police were making their arrests, a group of civilians appeared near the subway entrance.  It appeared to be a family group, but there was something furtive about the way they moved.  "What do you think they're doing?" asked John, as he peered round the garbage truck.
"Looters, maybe?" said Bomber.  "Looks like they're up to no good, anyway".  This was confirmed as the newcomers broke open the door to the bookshop and vanished inside. 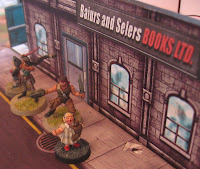 Only moments later, however, the looters came running out again.  "Looks like they found something they didn't like!" grinned Bomber, as a low moan was heard from the direction of the store. 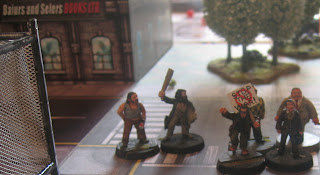 Close by, on the west side of the map, a strange collection of civilians came round the corner and into sight of the police barricade.  2 of them were weaving about as they walked and were obviously drunk, while the others were obviously agitated about something.

As the family of looters ran past them, some of the civilians looked round.  Most just carried on up the street, towards the police, but 2 of the least fit ones saw the zombies that were following the looters out of the bookstore.  They both started to point and scream! 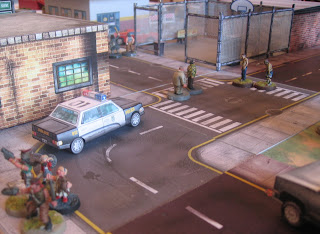 The terrified citizens stood rooted to the spot, when a further patrol car came round the corner of the road.  It swiftly drove past and then turned so as to interpose itself between most of the zombies and the people. 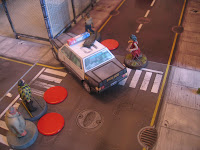 A shotgun blast rang out from the car window, felling one zombie. 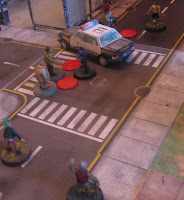 Even as zombies started to pour into the area from the size streets and (especially) from the subway entrance, 2 men leaped out of the stalled vehicle.  Detective Lestrade kept the zombies from the subway at bay with his shotgun, whilst officer Columbo watched the side street.  "Go!  Run!" he called to the 2 screaming civilians, as he hustled them up the road.

Further up the street, near the quarantine barrier, the policemen were having a hard time.  Initially, Starsky had refused to let any of the civilians approach the barricade, but officer Clouseau had more heart.  "They're people, sarge!" he called.  "We can't send them back - they'll die!"  As the sergeant dithered, a stray zombie from the basketball court  attacked one of the drunks and felled him. 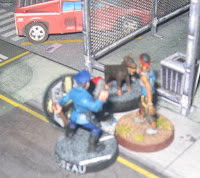 Without hesitation, handler Clouseau and his dog (Rex) waded in to rescue the injured man.  They destroyed the zombie and then started to drag the drunk back towards the rest of the cops. 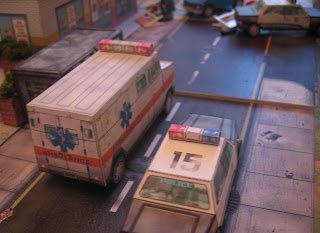 As they did so, the ambulance arrived at the north-western barrier.  Hearing all the noise, officer Krupke left the north-eastern barrier and headed towards the fracas.  "Stay here!" he called to the rookie officer Cagney.  "Don't let anyone through.   I've got to help over there!" 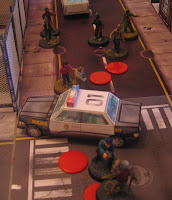 At the junction, Lestrade called out "Columbo!  I can't hold them - there are too many!" as more and more zombies poured out of the subway.
"OK, let's get out of here" answered the other cop.  Both of them started to back up the street towards the barricade, gunning down any zombie that came too close.

Back at the Garage 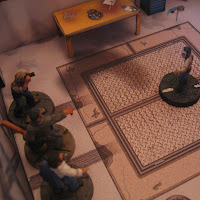 "They sound pretty busy over there.  Now's our chance; let's go!" shouted John.  He and Bomber heaved up the door of the garage and rushed inside.  There was an occupant, of course: a single zombie was clearly trying to get out of the other door, towards the noise.  It was all too easy; John distracted it whilst Bomber felled it with his baseball bat.  Terry grabbed several packets of cookies off the bench.  "What?" he asked as the others stared at him.  "It's not as if he needs them any more".  John glanced briefly around; there were some car keys on the key rack, but they weren't labelled and it would have been difficult to figure out to which vehicle they belonged. 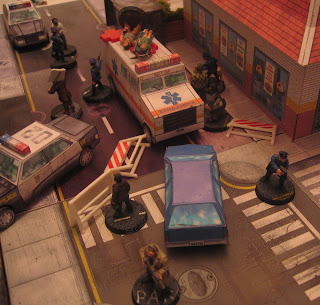 At the north-western barrier, things were unraveling fast.  Officer Columbo and Detective Lestrade formed a rearguard whilst the rest of the cops hustled the civilians along the road.  Denis, the injured drunk was loaded into the ambulance, as was the driver of the blue car who had been shot by officer Starsky.  The 2 passengers from the blue car were bundled into one of the patrol cars, handcuffed and under arrest.

The ambulance started up and began to reverse back along the road with lights and siren blaring.  "Switch that off!" called Lestrade.  "I think it might be the noise that's attracting them!" 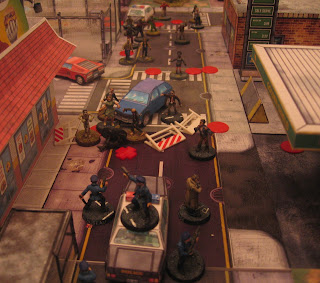 Once again, Clouseau sent his dog, Rex, to attack a lone zombie.  He had intended to follow, but hesitated when he saw the approaching horde in the distance.  Before he could react further, the zombies rushed forward and the dog was surrounded and torn apart.  "Nooo!  Rex!" he called as he fired into the mob and then drew his night-stick as if to charge.
"Leave it!  He's gone!" commanded Columbo.  "There's nothing you can do now - but I promise you we'll get even, somehow." 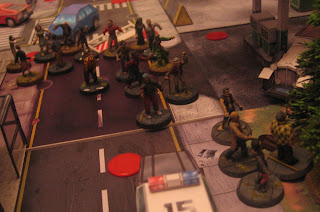 By now, all the civilians had left the area, escorted by the policemen.  Apart from Larry, that is.  He was hiding in a small clump of trees and crying to himself.  Lestrade had tried everything he could think of to get the man moving, but Larry just wasn't listening.  Eventually, the cop had given up and left him, just as the zombie horde approached... 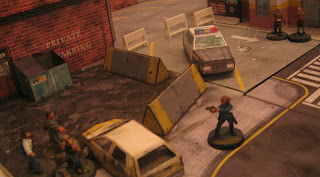 "I think the coast is clear.  They've all gone" said John.  He, Bomber and Terry came out of the back door of the garage and started to make their way across the wasteland beyond.
"Halt!  You're all under arrest!" came a woman's voice.
"Naw, I don't think so" droned Bomber.  "Just stand aside and no-one need get hurt".
"Put your hands where I can see them!" ordered officer Cagney.
"Err...Look out!  Behind you!" called John, as he saw a couple of zombies approaching.
For a moment, the woman looked doubtful.  Then she replied "Oh, come on!  I'm not that stupid!" 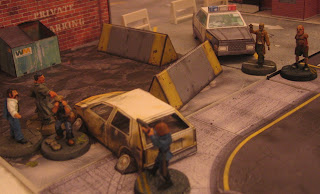 She edged towards the men, keeping them covered with her gun.  As she came round the corner of the burnt-out wreck, she noticed movement out of the corner of her eye.  "Oh, shit" she swore as the zombies closed in.  She spun round and opened fire.

"Come on.  Let's give her a hand" John said to Bomber and Terry.  He vaulted over the obstacle and attacked one of the approaching zombies. 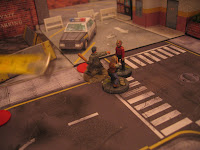 The men easily dispatched the remaining zeds, before turning back to officer Cagney.  She was visibly shaking as she tried to call for assistance on her radio, but there was no reply.  Without saying a further word to anyone, Cagney stomped over to her car, started the engine and left the scene.  The 3 men looked at each other, shrugged and walked on home.

Amazingly, John, Bomber and Terry all earned a REP increase from this game.  I guess that sometimes hiding and skulking is the smart thing to do.

As the ambulance carrying the injured civilians sped across the city, Denis (the drunk) went into a cardiac arrest and his vital signs flatlined.  "I think we've lost this one!" called the paramedic in the back to his driver.  While his back was turned, Denis' body stirred again.  There was a horrible moaning sound as Denis' arm reached out and pulled the crewman down so that he could bite his throat out...