A Wet and Windy Sunday.

On Sunday, my friend Steve and one of his sons visited for the day.  We'd decided to play ATZ; it ended up being quite a big game.  Read on to find out what happened.

There were armed gangs (and worse) roaming the streets now.  Without any power and without working phones, the occupants of the "Golden Hills" retirement complex couldn't tell what was happening more than a few blocks away.  At a brief council of war, it was decided that a group should try to make it to the nearest police station and seek for help.  Maybe they could persuade some officers to return with them to bring law and order back to the area?

It was agreed that the party would consist of:
The police station is the yellow building at the far end of this picture.  It's quite a nice area, with some parks and trees to the right, though there are also some garages in the foreground, a burger bar in the centre and a petrol station in the back left corner: 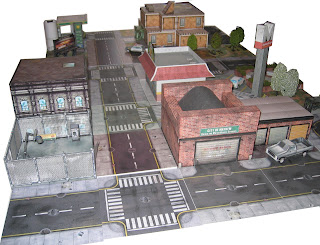 "I'm not just marching up the road!" said Goofy.  "We might be seen!".
"Well what do you suggest then?" replied Bomber, sarcastically.
"Just take it carefully, that's all I'm saying" was the reply.
The group crossed the street and huddled in front of the door to the garage whilst considering their next move. 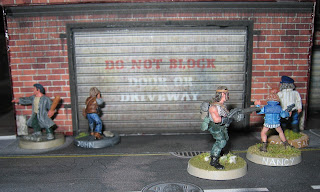 "That's strange...this door is warm" John commented.  But before anyone could offer an explanation, the group were interrupted by the appearance of a man assisting a woman round the end of the lockups to their right.
"Help!" shouted Terry (the man).  "She's hurt!  Please help us!" 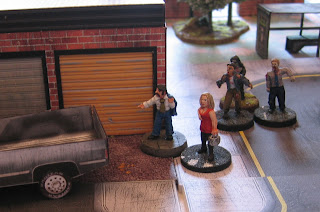 As Terry spoke, three things happened simultaneously.  First, thick smoke started to pour from the upper part of the garage in front of the party [what, again?  A building caught fire spontaneously in the last game as well - I think my random events are playing tricks on me!].  Next, zombies appeared all over the place.  Indeed, it turns out that Terry and his lady friend were unaware that they were being followed.  Lastly, Terry's companion gave a shudder, started to moan piteously and then lunged forwards in an attempt to bite him.  She had just turned into a zombie. 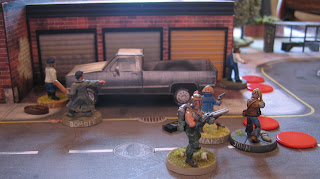 For a few moments, everything was pandemonium!  Captain Salty ran and hid behind the pickup truck, even as John and Nancy dispatched 2 of the attacking zombies.  Bomber and Goofy ran up to see what was happening, but were too late to do anything.  Astonishingly, Terry (REP3, unarmed), despite being attacked from behind, put down 2 zombies on his own.  He even managed a weak smile afterwards!

Bomber looked round when he heard noises behind him.  "Guys!  We've got to go!  Now!" he called.

Captain Salty was still crouched behind the truck, mumbling something quietly to himself. 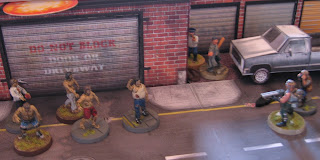 "Come on!  Now, Salty!" shouted Bomber.  "Now or not at all!"  At the last moment, the old Captain mumbled something about worse things happening at sea and started running after the rest of the party. 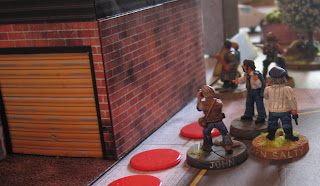 Nancy had scouted ahead a little way and was peering round the far corner of the block, looking into the burger bar's car park.  As the men of the party ran for their lives past her, she wasn't paying attention and no-one remembered to warn her.  They reached the far end of the park before anyone noticed. 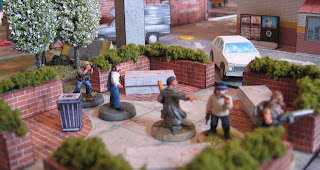 Across the road from the park, Goofy could see 2 figures approaching from the direction of the police station.  They were cops - officers Columbo (REP5) and Callahan (REP4).  This was just what the group was looking for!  Help was on its way!