Tonight at the Helensburgh games club, most of the older members were rejuvenating some of the house terrain, which had become somewhat battered with heavy use.  It was left to me to host a game for the younger members and for any others who didn't wish to paint.  I chose to bring Prehistoric Settlement.

Prehistoric Settlement is an empire-building game by Steve Barber Models.  As might be expected from the title, it's set in the stone age, though this probably owes more to Hollywood's vision of those times than to any real paleolithic struggle for existence.  Each side starts with just a handful of cavemen who have to acquire resources (flint and food) as well as defend against perils (mostly other cavemen, but also mammoths, sabre-tooth cats and the like on occasion).  Resources are spent to expand the side's settlement with new and better tents and also to recruit more cavemen. 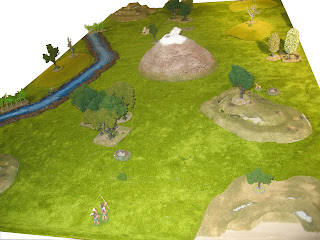 The game began with the small tribe who called themselves the Wolf People (grey furs, brown hair) surveying the land before them.  There were trees for shade, a river for water and they could see a few deer grazing close by.  There were even several likely locations where good quality flint might be found.  It seemed like a veritable paradise.  Little did the Wolf People know that on the far side of the volcano, the Bear Clan (brown furs, blond hair) laid claim to the same lands! 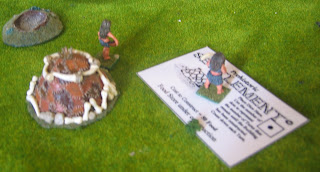 The Wolf People decided to start a settlement near the forest and flint mine, south of the volcano.  Initial work went swiftly; a tent was erected and a berry picker was recruited. 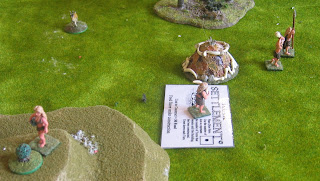 To the north of the volcano, the Bear Clan proceeded in much the same way.  They were slightly luckier though; there were more deer close at hand and so the hunting was better. 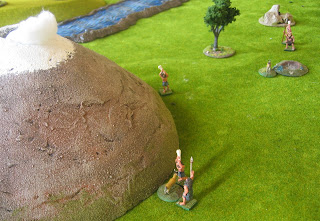 Tensions rose when the Wolf People chased a deer round the volcano and killed it within sight of the Bear Clan's chieftain! 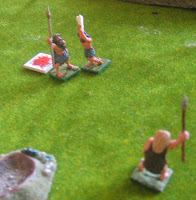 A hastily-thrown spear injured the interloper's chief, but although there was much posturing, nothing else happened - for a while. 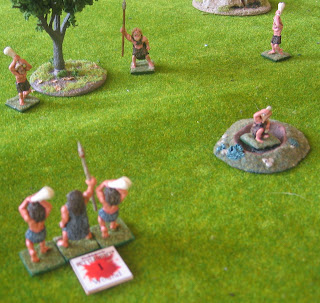 The Wolf People stood and waited.  Their chieftain had a plan: his builder would come forward and construct a tent nearby, well inside Bear Clan territory.  The tribe could then recruit more warriors just where they were needed! 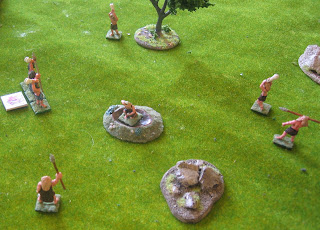 However, the defenders sensed something of the threat.  They started to move to surround the grey-clad foreigners, whilst also bringing up some reinforcements.

Then, disaster struck the Wolf People.  Who knows which god or gods they had offended, but for 2 turns running they suffered a calamity!  Firstly, immediately after their builder completed the nearby tent storms and high winds caused them to miss a turn.  Then on the turn following that, a cyclone struck!  Most of the force was felt back in their homelands, where their only berry picker was lost.  This, along with the expense of constructing the second tent, left the Wolf People very low on food. 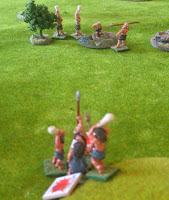 In desperation, the Wolf People's chief and his attendants charged the Bear Clan's isolated chieftain.  Although they did manage to wound him, the attacking leader took a second wound in return. 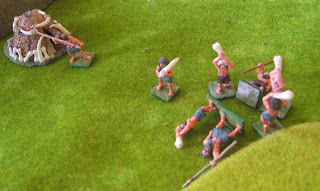 The Bear Clan weren't going to stand by idly, so their tribesmen rushed in to assist their leader.  Even as the Wolf People's new tent started to produce warriors, both chieftains killed each other in the ensuing melee!

The Wolf People, impoverished by the construction of their second tent and the recruitment of a spearman from it, couldn't afford the 100 food needed to elect a new chief.  The Bear Clan were rich enough, so they buried their fallen leader with honours and then appointed a clubman as his successor, while their dispirited enemies were broken and scattered.  The tribe of the Wolf People was no more!