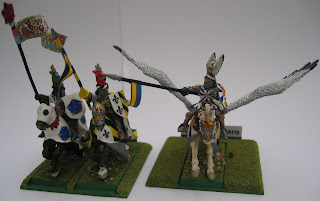 Over the years, I've collected a considerable number of figures for Warhammer Fantasy Battles.  Indeed, I have 4 large armies, several of which have enough troops to be subdivided so as to fight decent-sized civil wars.  And the really strange bit about all this is that I've never even played Warhammer...

Some time ago, I was looking for new rules for the kids at the Helensburgh Games Club and I remembered all these Warhammer figures.  I still didn't wish to play Warhammer - I'm sure it's a very fine system in its own way, but I needed something that was simple and could easily produce a result in a couple of hours.

The answer was blindingly obvious: "Hordes of The Things" (HoTT from now on), which was already sitting and waiting on my bookshelf.  Although HoTT is often played with 15mm figures, the rules do have sizes and measurements for 28mm as well.  Since I'd be providing the entire setup, there would be no issues with compatibility!

Warhammer uses individually-based figures, typically on 20mm squares for infantry or 25x50mm for mounted troops.  HoTT uses multiple-figure elements with 60mm frontages (for 28mm models) and varying depths, depending on the troop type.  Clearly some new bases would have to be devised!

Fortunately, some types of infantry element happen to be a precise multiple of the Warhammer base sizes.  For example, Spears use 3 models on a 60x20mm base - exactly the size of 3 Warhammer slottabases.  It wasn't too hard to just glue 3 models onto a suitably-sized piece of card.  Similarly, Hordes require 6 models (more or less) on a 60x40mm base and these could just be glued together so as to make a single element: 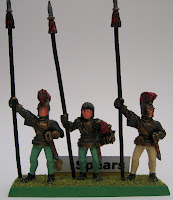 These multiple-figure bases could still be used in Warhammer (should I ever desire to do so), especially if I kept aside a few singly-based figures.  But what to do with the bases where the HoTT size wasn't a clean multiple of Warhammer bases?  I didn't really want to rip all the models off their existing bases and fix them to new ones of the right size for HoTT - firstly it would be a lot of work and secondly it would render such figures unusable for Warhammer.  What to do?

Initially, I tried just making simple trays that were the correct size for HoTT elements.  These were very unsatisfactory, mainly because the models kept falling off.  Additionally, they were hard to pick up and move.  I experimented with magnetic trays, but found that adding the magnetic paper to existing bases made them very thick.  In any case, the magnets weren't strong enough to hold any metal models.

The HoTT bases need to hold the slottabases in place.  They also need to be cheap and reasonably easy to make.  Almost by accident, I came up with the idea of using sprue!  Yes, the stuff that you normally just throw away: 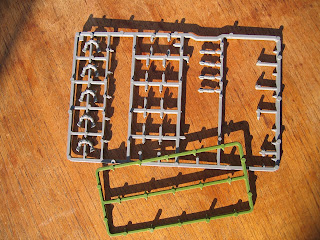 First, select your sprues.  Most manufacturers of wargaming models produce a sprue with flat faces and sloping sides (a trapezium, for those of you who know their geometry).  This is the stuff you want to use: the plastic of the sprue slopes at about the same angle as the side of a slottabase.  If the sprue is round or any other shape in section then it's no use for this purpose.

Cut the sprues into straight lengths, discarding any awkward corners or the occasional wiggly bit.  Although you could use a knife to do this, I find that a pair of side-cutters is much quicker and easier: 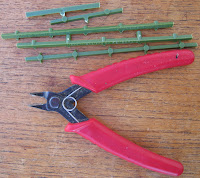 Cut off all protrusions (again, a side-cutter makes this easy!) and smooth down any rough patches that remain.  Note that for most pieces you only need to smooth the base of the sprue and one side.  For centreline pieces, however, both sides must be smoothed.  You'll see what I'm talking about in due course:

The following picture should give a better idea of the base construction than words alone can do.  These are 60x60mm bases, designed to hold 2 cavalry slottabases, though other shapes and sizes use exactly the same technique.

Firstly, cut squares of the HoTT base size from thick cardboard.  Then, stick lengths of sprue to the base, narrow edge down.  In turn, glue one piece of sprue across the back of the base.  When that's dry, glue a centreline piece down the middle.  That's the piece of sprue that you smoothed on both sides, remember?  Finally, glue on 2 side pieces:

There's a trick to sticking on the side pieces; it's very important to make the gap just the right size for the base it will hold.  If the gap is too wide then the HoTT base won't be very satisfactory because the models won't be held down.  On the other hand, if the gap is too narrow then you won't be able to fit a model into the slot at all!

I've used an old base of the desired type to make sure that the side sprue is stuck on at just the right distance.  If you add a thin piece of card to one or both sides of the old base then this makes it much easier to obtain the correct gap size.

Once dry, trim any sprue that overhangs the base's edges.  Then use filler around the outside to improve the appearance, thus: 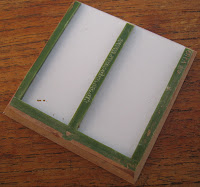 The base can be undercoated and finished in any way you like.  Since I needed to match some of my early 28mm models (before I became adventurous with basing!), I undercoated the bases and then painted them green and flocked them.  I also like to add a label, so it's immediately obvious which troop type the model represents and to which army it belongs: 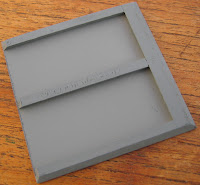 Finally, all that remains is to slide the Warhammer models into their new bases.  If the slotabases fit snugly then there won't be any problem of troops being knocked off their elements and you're all set to play HoTT:

Of course, this technique could also be used for other games as well as HoTT...
Posted by Colgar6 at 20:09