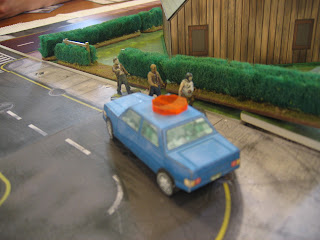 As the residents frantically barricaded the front door and windows of Gertrude & Albert's cottage, more zombies were approaching from the north-west.
By now, PEF-6 had come into the open and was resolved as a false alarm - but it had raised the encounter level to 2.
It wasn't any great surprise when we had the first random event of the game - a car alarm went off!  Obviously, the blue car had a sensitive motion detector and the nearby lurching of the zombies triggered it.  The creatures milled around the vehicle, temporarily distracted from their quest for meat! 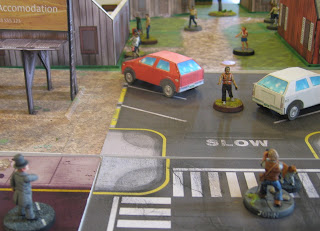 John and Darcy could only watch as more and more zombies gathered around the front of the cottage.  Occasionally, one of them would catch sight of one of the men standing in the open, but careful shots from John's or Darcy's pistol took them down before they could get too close.

Another random event occurred; it was with a sinking feeling that the humans remembered the nearby lockup garages.  They had spent effort in preparing them as a refuge some time previously, but obviously no-one could reach them now! 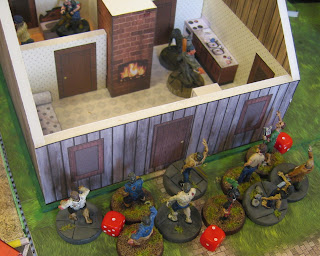 Back at the cottage, the zombies were massing and the barricades were failing.  Just before the mob broke through, Bomber hustled the old folks back into the bedroom.  He took a look around, wondering whether he should attempt a last stand on his own (well, with Clancy the wolfhound), but thought better of it and followed the other humans. 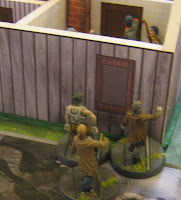 Even as Bomber closed the door behind him and the group prepared to barricade it, trouble came from behind.  The zombies who were distracted by the car alarm had lost interest in it and continued to shamble up the road.  When they saw the flurry of activity behind the bedroom curtains, they immediately started pounding on the window, breaking the glass and reaching in to grab whatever they could! 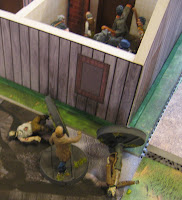 This was Clancy's moment.  With a low "wuff", he leaped at the intruders and sent them sprawling!  In FFO, beating a zombie in melee doesn't automatically dispatch it.  You use your margin of victory as "impact" when assessing damage, so it pays to win big!  Otherwise the opponent will be knocked down - and a knocked-down zombie will just get back up again. 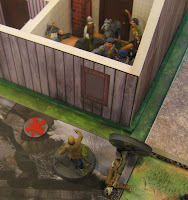 Quick as a flash, Bomber and Salty rushed to the window and opened fire with shotgun and pistol.  They both hit their targets; the shotgun blew apart one of the enemy, but Salty's shots merely thudded into the zombie's body without crippling it.

A Change of Heart!

At the front of the cottage, the door and one of the windows finally crashed open as the last of the barricade was swept aside.  Then, one of those game-changing moments occurred.  A random event was indicated and a "He's over here!" card was drawn.  This is not a part of ATZ-FFO, but rather is one of the new events in my random event deck.  It has the effect of making zombies suddenly take notice of a character of whom they were previously oblivious. 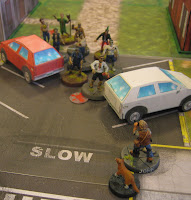 There was a brief pause as the mob at the front of the cottage hesitated before entering.  In that moment, Laddie gave a little yelp of excitement.  The crowd of zombies turned, saw the man standing in the open and immediately lurched eagerly in his direction.  "Bollocks!" exclaimed John, as he turned and fled. 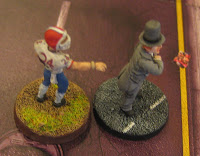 At the same time, Salty and Bomber continued to fire on the remaining zombies at the back of the cottage, destroying both with ease.  In FFO, dice rolls for gunshots or other noise are now made immediately, rather than at the end of the turn.  Although the humans had been lucky so far and hadn't attracted any more zombies, their luck turned as Salty's shots caused a newcomer to enter the table right behind an unsuspecting Darcy. 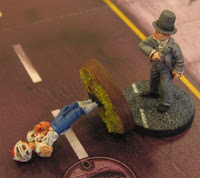 Despite being taken by surprise, Darcy managed to disable his attacker.  There is no specific penalty for a rear attack in FFO, although a character won't be able to use a melee weapon in such a situation. 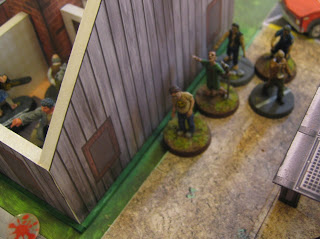 Darcy then ran round the back of the nearest cottage, as some of the zombie mob split off from chasing John in order to pursue him instead.  He had intended to climb through a window and join Bomber's group, but decided that the pursuit was too close to attempt this.  Instead, he just kept running...

This is The End, My Friend. 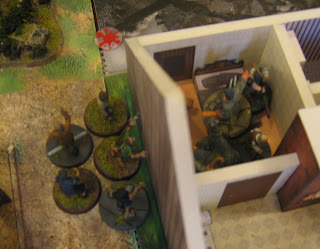 The zombies lost sight of Darcy fairly quickly.  However, they were now perfectly positioned to see the huddled group in the back bedroom.  One of them broke the glass and leaned inside, champing and clawing at whatever it could reach.  As the pensioners screamed, Salty collapsed to the floor.  "He bit me!" mumbled the Captain, before he started to convulse.  In FFO, you test immediately on being wounded or stunned by a zombie to see if you are infected.  If so then you might change into a zombie yourself, on a '1' on your first activation, '1' or '2' on the second activation and so on.  Salty failed the "Harry" test and then rolled a '1'. 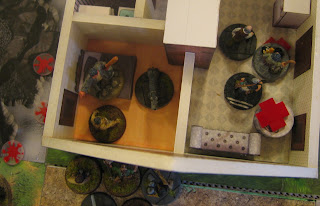 "Everybody, get out of here!  Now!" yelled Bomber.  The residents were only too happy to obey and left the bedroom as quickly as they could.  "Sorry, mate" he whispered, as he chambered a shell in his shotgun and blew away the newly risen Salty zombie.

Another random event!  This time it was "out of fuel", which wasn't too important since no-one was driving at the time.  However, for future reference, it's Darcy's red compact that is empty. 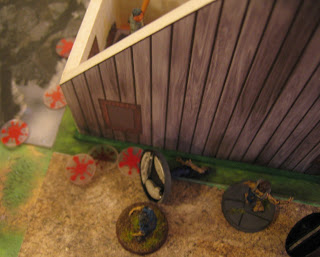 More and more of the zombie horde clustered around the bedroom window.  "Come and get it, you dead b*stards!" yelled Bomber, as he exterminated them ruthlessly with his shotgun.  He was past caring about the noise now; he just wanted revenge.  Bomber was very lucky with his rolls to attract zombies.  Out of 36 or more dice for noise, he only generated 2 new zeds, but he killed many more than that!

A Walk in the Park 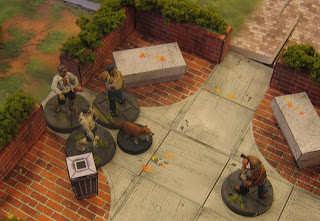 Meanwhile, John and Laddie were hotly pursued by the other, smaller part of the mob.  Laddie didn't seem to understand the new game very well and fell behind.  Just as John turned round to see where the dog was, the 2 leading zombies reached for him! 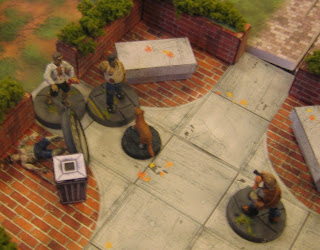 Laddie ran between the legs of one of the clumsy zeds and tripped him up, even as the other clutched at him and missed.  Amazingly, the REP 2 dog won one melee (by 1) and was evenly matched in the other! 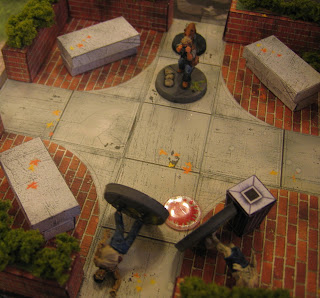 Without hesitating, John pulled out his pistol and fired into the melee.  He killed one zombie outright and knocked down the last one, before calling Laddie to heel.  FFO has rules for firing into a crowd.  Roughly, if you hit your target then that's fine.  If you miss by a wide margin then you miss completely.  But if you almost hit the intended target then you actually hit something else close by.  John's shooting was very, very accurate and he didn't hit Laddie!  Mind you, I forgot in the heat of the moment that an Impact 1 pistol doesn't cause knockdowns! 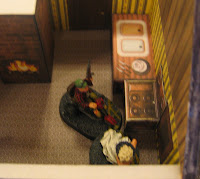 Back in Abe's cottage, Lizzie was peering out of the window.  She could see Albert, Gertrude and Edna preparing to flee from the furthest cottage.  She also saw a single zombie come round the end of the cottage after them. 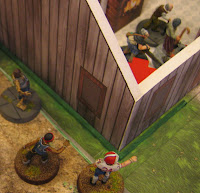 Quickly, Lizzie explained the situation to Abe.
"Can you shoot, miss?" he asked.  "I reckon your hands are steadier than mine".  She nodded, so he passed her his hunting rifle. 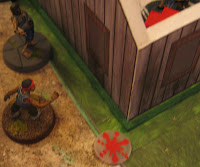 Carefully, Lizzie edged the window open and stuck the rifle through the opening.  She took careful aim, squeezed the trigger and shot the zombie through the head.

Sadly, at this point, we ran out of time and had to pack up.  However, there were only 2 or 3 scattered zombies left on the table and all the PEFs had been resolved as nerves or figments of the imagination.  From that point of view, the game was all but over, so I ruled that the remaining humans could have hunted down and destroyed the surviving zeds reasonably easily.

John, Bomber, Darcy and Lizzie had all killed zombies and the victory conditions for the game were met (i.e. defend the homes).  All four were therefore eligible to roll for an increase in REP and astonishingly, all of them were successful!.  That means that John and Bomber are now both REP-6 hard men and Darcy and Lizzie are each a very capable REP-5.

So, what's it like playing with ATZ:Final Fade Out?

Well, much of what we used would be very familiar to anyone who knows ATZ:BDTZ.  The initiative rolls, shooting and zombie movement are similar to the older rules, though not necessarily identical.

Many of the rules that are different from ATZ:BDTZ didn't come into play in this game.  The new In Sight test wasn't used because there weren't any other humans (In Sight isn't triggered by zombies).  The FFO encounter tables weren't used because none of the PEFs was anything more than imagination.  Mind you, I would probably have used my own encounter cards anyway.  We didn't need to use the FFO vehicle rules or the campaign rules.  In the rush I forgot to apply some of the standard reaction tests (most obviously, Man Down when Salty fell and probably Zed or no zed for the old folks.  Although Bomber would likely have passed and the others intended to run away anyway, so I can claim that the outcome would have been the same if I had remembered to take these).

FFO has new (or more developed) rules to cover a number of useful situations, such as shooting into a crowd or barricading doors and windows.  Interactions between vehicles and pedestrians are better defined, whether involving shooting or charging.  Lots of things are clearer.

Melee is totally different.  I like very much the fact that the margin of victory is used in determining damage.  I'm neutral about the melee ending after one set of rolls (we used to like the to-and-fro tension as each side's pool of dice shrank with each successive roll, until finally one side failed completely), or about melee being resolved one opponent at a time (no more decisions about how to split your available dice).  I expect I'll keep using these rules as written.  I'm really not sure I like the lack of a possible failure on the Charge into melee table: the attacker will always charge home.  Finally, I'm not comfortable with the lack of a penalty for a surprise melee attack, such as from behind.  Still, these are items which are easily amended by house rules if I choose.
Finally, the penalty for losing a round of melee to a zombie is likely to be severe.  If you are bitten then you will turn into a zombie and that is likely to be sooner rather than later.  Poor Captain Salty.