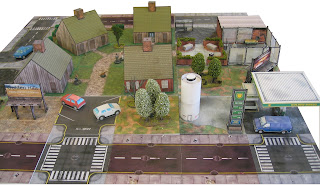 "Golden Hills" is a residential complex for the elderly, mentioned a few times previously in my ATZ campaign.  Indeed, recently I described the building of a model for this area (here), so it cannot be a surprise to any followers of my blog that the action has now moved there.

This is the first game I'll have played since receiving my finished deck of random events back from the printers.  I'm hoping that there will be interesting opportunities to see them in action.

I'm extremely fortunate to have a preview copy of the yet-to-be-published ATZ-Final Fade Out rules (ATZ-FFO from now on) from Two Hour Wargames, so this game will be a playtest for them.  I'll try to point out the differences from the current edition (ATZ-BDTZ) as we go.

The Story so far

After the disastrous attempt by the authorities to impose quarantine on the early stages of the zombie outbreak (here), the plague is spreading.  A number of people are staying at Golden Hills in addition to the official residents.  In some cases this is to help protect a relative; in others it's because their own homes are overrun, destroyed or quarantined.  Present today are:
Other characters who have appeared in previous episodes (Terry and Goofy) are out foraging for supplies.

Note that in FFO, characters are defined by REP (as before) but also have 2 skills: PEOPLE and SAVVY.  These are used respectively for social interactions or knowledge-based problems.  Since none of my character cards have these skills on them, I'll make up the values if/when I need them for a specific character.

This game will be treated as rural and encounter level 1, mainly because it's a quiet part of the town and lawlessness (and the zombie plague!) haven't yet touched it.  Rural determines the chances of generating zombies with gunfire or other noises as well as being a modifier on the "how many" table when resolving a PEF.  Encounter Level is used to decide whether a PEF is real or imaginary and also the chances of a random event.

Rather than have players entering a table that is occupied by zombies as is common in scenarios such as "search", I've reversed the sides so that zombies and PEFs will enter from random edges whilst the players occupy the centre.  House rule: any player characters who start in a building will have their REP halved (rounded down) for purposes of activation until they are alerted by a friend, gunshots or seeing an enemy.

It was a calm, clear morning at Golden Hills, just like many before.  John had just taken Laddie out to do what dogs do in the mornings when he bumped into Darcy and Lizzie coming out of one of the other houses.  Everyone else was getting up, washing and preparing breakfast... 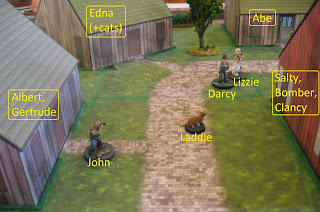 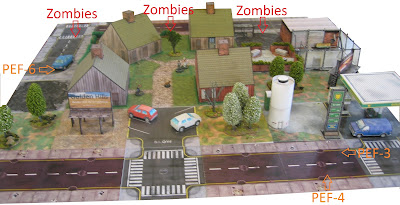 As Laddie greeted Darcy, John stopped to listen.  "Do you hear that?" he said.
Lizzie replied "No!  It can't be!"  They could all clearly hear a low moaning sound coming from the north by now.
"Right!" said John.  "We have to warn everyone.  Lizzie, you go to Abe's.  Darcy, you take Edna.  I'll tell Gertrude and Albert". 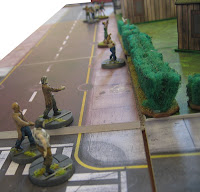 The zombies shambled forwards slowly (In FFO, zombies are REP 4 for activation when chasing a character, but otherwise they are REP 3).  The PEFs all alternated between advancing and retreating, but never came into sight of any character.  This caused mild consternation, but soon the players had other things to worry about. 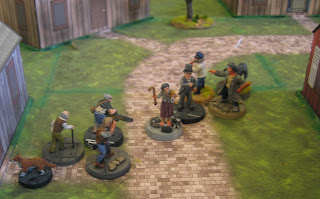 Most of the occupants of the houses poured out onto the central path, with the exception of Lizzie and Abe.  They were much closer to the advancing creatures and decided to just lie low instead. 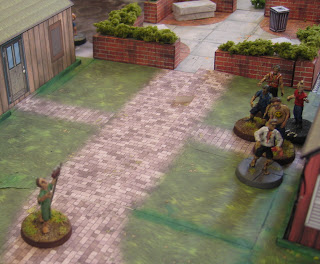 "Quickly" called John.  "Everyone, follow me!"  He herded the group into the nearest building, but they had been seen.  The group of zombies coming from the west noticed the last of the humans as they shut the door of Albert and Gertrude's house.  The moans grew more insistent as the small pack picked up their pace. 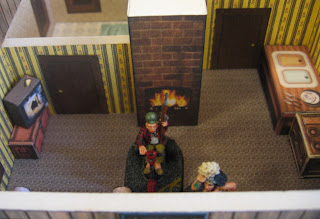 They were so intent on chasing their prey that they failed to notice Lizzie and Abe hiding in the first cottage they passed. 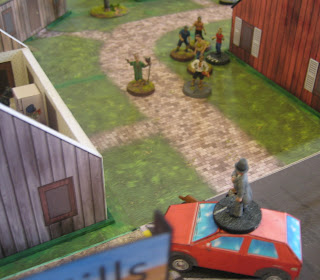 Darcy ran to the nearest car, intending to drive it in front of the cottage door as a barricade.  John and Laddie sprinted out after him, but they quickly decided that they hadn't got enough time to carry out their plan. 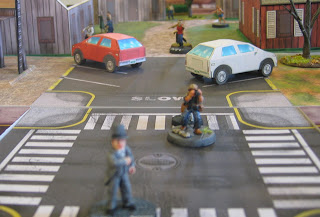 Instead, they leaped out of the car and fled on foot. 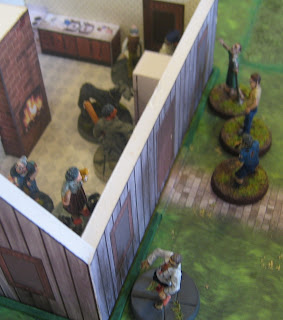 The zombies caught sight of the cottage's inhabitants as they frantically tried to barricade the door and front windows.  This was much closer than the 2 fleeing men and so they all crowded round the building, tearing and clawing at the hastily-erected defences.

More and more zombies entered the complex.  Attracted by the noises, they concentrated on the cottage that held the bulk of the humans, bypassing completely the building where Lizzie and Abe remained in hiding.