At Golden Hills, a council of war was held in Gertrude and Albert's kitchen.
"I don't think we can remain here" said Bomber.  "I know there are no zombies in this area for now, but this complex is just too vulnerable.  We don't have enough people to defend it and there is no way to fortify it easily."
"You want us to leave our homes?" replied Gertrude.
"Yes."
"But where would we go?  How would we travel?  You know that Albert and I can't walk far, don't you?"
Iain spoke up, hesitantly "What about the evacuation camp?  You told me that the rest of your group were heading there."
"Yes, but we don't know where it is - the soldiers never told us."
"There's another thing" continued Bomber.  "If we split up then we have no way of keeping in touch.  Phones aren't working any more.  We really need some walkie talkies or something like that."
"Police station" Goofy interjected.  "You could get radios there.  Might find out about evacuation plans as well."
"Right!  That sounds good.  Where is the nearest cop shop from here?" 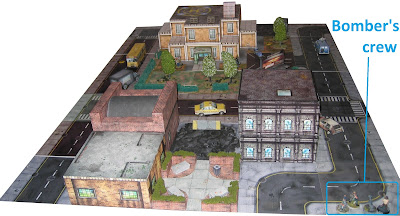 This scenario is a straightforward scavenge mission.  Radio equipment might be found in the large police station at the far end of the table.  There's also a deserted Channel 5 News van (blue) in the road near the precinct house.  It has a satellite dish on its roof, so perhaps it has some usable communication gear inside it?

Personnel in Bomber's group are:

The team had barely moved up to the closest building when Clancy started to whine and shake his head.  Almost immediately, the humans noticed the strong smell as well (random event: gas leak!).

"That smells like gas!" exclaimed Iain.  "There must be a broken pipe somewhere nearby.  In that bookstore, maybe?"
"It's very strong, isn't it?" replied Bomber.  "Right, we don't want to cause an explosion.  Put away your guns."  This decision would be regretted very soon.
Showing some reluctance, Goofy slung his shotgun and grasped his axe instead.  Iain looked much more comfortable as he practiced a few swings with his cricket bat. 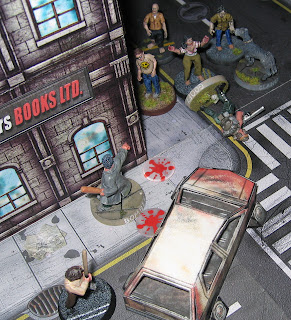 Before the group could move any further, a pack of zombies approached round the corner of the building.  Bomber was immediately engaged by 2 of them, though he killed both easily with skillful strokes from his baseball bat.  Iain looked shocked and froze in place at the sight of the monsters (failed his citizen's "brown pants" test), but Goofy and Clancy charged the zombies head on!
Perhaps they suddenly realised that they were outnumbered, or perhaps the smell of gas made them lose concentration.  Whatever the reason, the ensuing melee didn't go well for the pair.  Clancy failed to do anything to his opponent, though at least avoided injury.  Goofy attacked with the axe, but he wasn't used to the long handle and timed his swing badly.  The zombie lurched under his guard and bit him in the shoulder. 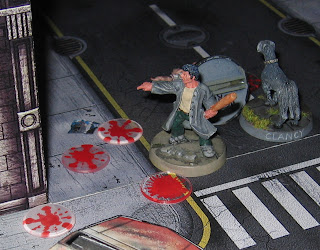 When Bomber came round the corner, he saw Goofy staggering backwards, holding one bloody hand to his wound.  As he watched, green lines spread quickly from the wound along his veins.  Within moments, Goofy started to convulse (rolled a '1' for the number of activations before he became a zombie).  His last act was to turn to his friend and look pleadingly at him.
"Aw, shit!" exclaimed Bomber.  He strode forward and smashed Goofy's skull with his bat.  Bomber then methodically battered all the other zombies to the ground, one after another. 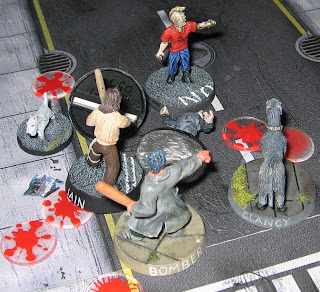 Just as Iain finally plucked up courage to join Bomber and Clancy, a small, white Scottie dog ran past them.  Following it was another bunch of zombies.  This time, Iain joined in the melee, though Bomber's continuing rampage accounted for most of the monsters. 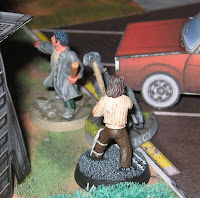 Iain was feeling very nervous now and would quite happily have given up and retreated.  However, he didn't dare to say anything as Bomber wiped his bat clean, squared his shoulders and marched towards the police station.  Clancy followed and Iain trailed along behind. 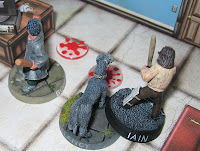 Inside the police station, there were more zombies.  2 such creatures in the reception area were no match for the experienced survivors; they were quickly destroyed.  Searching the desk revealed a single police radio which was quickly put into a pocket.  The party would need to find at least one more before it would be useful, of course! 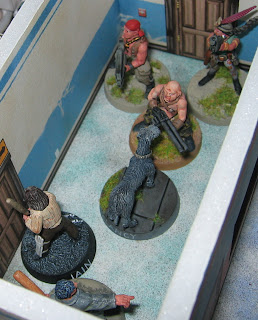 A nasty surprise awaited the team in the next corridor.  3 rough-looking humans were already present and didn't look at all pleased to have company (Buck - REP 5 with rifle, Curly - REP4/shotgun, Jess - REP3/pistol).
"Who the f*ck are you?" said the leader, menacingly.  He looked over the newcomers and noticed that they were well-equipped.  He continued "You know what, it doesn't matter.  Take your weapons off and put them on the floor, real slow, like."
To emphasise his leader's words, Curly cocked his shotgun.  This was too much for Clancy; the big dog leaped forward and, taking the bald man by surprise, knocked him to the ground (Clancy won the in-sight test for the "walk the walk", followed by Curly and Bomber, then Jess and Buck, with Iain last).
With Curly on the floor and being harried by the wolfhound, Bomber charged the man who had threatened them.  Buck was a little too slow in reacting and went down hard as the heavy bat struck him.  Panicking, Jess fired wildly at Bomber; the noise was tremendous in the enclosed space but her shots went wide.  She didn't get a second chance, as Iain waded in with his cricket bat and knocked her down. 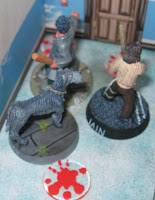 Within a very short time, all 3 of the team had finished off their enemies (this was the last requirement for Iain to 'upgrade' from citizen to either survivor or ganger: cause damage to an armed opponent). 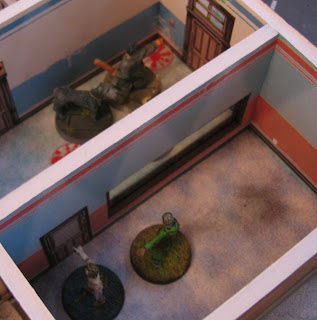 There were zombies in the line-up room next door.  Bomber and Iain could see them through the one-way window, though the zombies couldn't see the men.  However, these zombies had become interested in all the noises in the corridor and were trying to get out of the locked room.  In addition to that, there was a scrabbling noise coming from the outside of the door to the car park.  It was time to go... 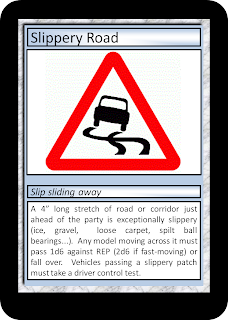 Just as the survivors entered the cell block, another random event (slippery road - or passageway) occurred.  They found the floor of the corridor awash with white foam.
"What the heck happened here?" asked Bomber.
"I think it's from a fire extinguisher.  Or many of them." replied Iain.  "Someone's had quite a party."
"Heads up!" shouted the other man, as a group of shuffling creatures appeared from the open cell at the end of the passage. 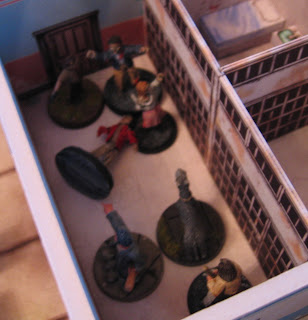 In the ensuing melee, both Iain and Clancy lost their footing and fell over; the foam on the floor made balance tricky.  Fortunately for them, Bomber was a bit more sure-footed.  Even better, the clumsy zombies kept sliding about and weren't able to attack very effectively.  Even so, there were a few dicey moments before the humans (and dog) prevailed: 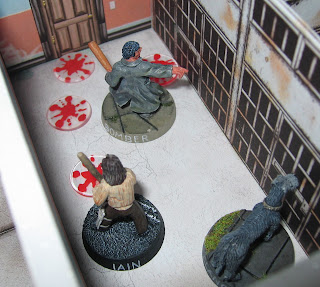 "Do you think someone did this to keep the zombies at bay?  I mean, covered the floor with goo" asked Bomber.  "It's be a good plan too, if we hadn't walked right into it".
"Maybe" replied Iain.  He was feeling very tired; too many people had died today and the strain was beginning to show.  "Hey, listen!"
"What?  I can't hear anything."
"Exactly!" Iain answered.  "It's gone quiet.  Either they've gone elsewhere or they're all asleep.  Do they sleep, I wonder?"
"Right now, I couldn't care less.  Let's block these doors and rest for a while." 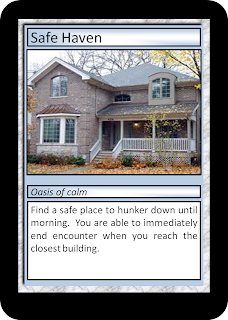 A last random event (Safe Haven) enabled the players to end the encounter when inside a building.  They chose to do so straight away and spend the night resting in the cells.  It may not have been very comfortable, but at least nothing would be able to surprise them for a few hours.  Tomorrow would be another story, though!