For this week's game at the Helensburgh games club, I decided to fetch out my oldest figures.  These are my 6 matched 15mm Biblical armies.  Some of these figures go back almost 30 years, though most models aren't quite so ancient.  Anyway, here's the scenario: 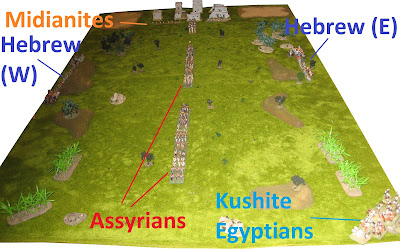 An Assyrian column, laden with baggage, is marching towards the captured town of Beth-Shemesh.  There they will rendezvous with their Midianite mercenaries.  Unknown to them, a couple of Hebrew forces, assisted by a detachment of Kushites, are planning an ambush!  That's a total of 6 DBA 'armies', each of 12 units, so both sides have the same number of elements.  Can the column reach the safety of the town or see off the attackers?  Read on to find out... 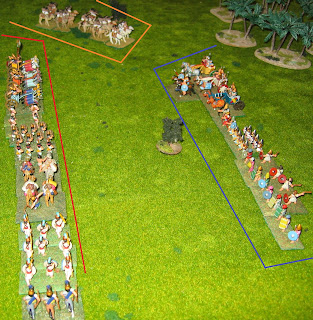 The Hebrew (E) army advanced rapidly towards the front of the Assyrian column.  Both the Hebrew (W) and Kushite armies were significantly delayed by bad terrain, having chosen to deploy behind steep hills and thickets of trees.In response, both the Assyrian vanguard and rearguard were caught unaware and only moved sluggishly.  However, the Midianite chieftain led his camels as fast as possible towards the ambushers, trying to save his paymasters! 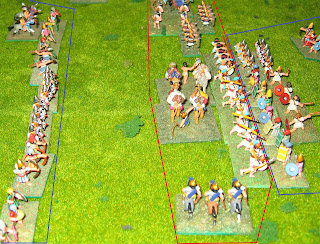 They weren't in time; the swift Hebrew infantry caught the bulk of the front Assyrian column before it could deploy properly.  The attackers quickly swept the guards aside and started to plunder the baggage! 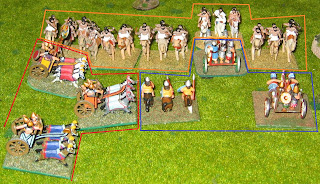 Things went badly for the Hebrew (E) general.  Firstly, he was pinned by the Midianite camels, then a devastating flank charge by the Assyrian king and his royal bodyguard wiped out all the Hebrew nobles from that force. 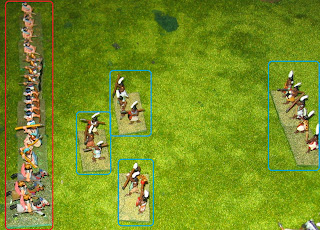 The situation was much better for the rear of the column.  The Kushite Egyptians were disorganised after forcing their way through patches of thorny scrub and steep, rocky hills.  This gave the Assyrian infantry plenty of time to form a defensive line to face them.

Seeing that the southern threat was neutralised, the general of the rearguard moved his chariots to assist his fellows in the vanguard.  Although he came too late to prevent the vanguard being overrun, the Assyrian did managed to trap the Hebrew (W) general and slay him!

Caught between the infantry of the 2 Hebrew forces, the Assyrian vanguard was crushed.  Indeed, the only element left was the king himself!  He made a quick "strategic withdrawal" into the safety of the town of Beth-Shemesh, screened by the allied Midianite foot warriors.  However, both Hebrew armies were now out of control, looting the bodies and baggage of their enemies (a combination of loss of generals and low PIP rolls meant that neither Hebrew force could be made to move).
This was too much for the Assyrian rearguard; it broke and scattered.  Both soldiers and baggage train headed for the hills, pursued somewhat ineffectively by Kushite tribesmen.

The situation at the end: