TRWNN: The Hanging of Buck Johnson

For this week's game at the Helensburgh club, I wanted to run an Old West gunfight to show off my newly-completed Battle Flag gallows.  This is the scenario I came up with: 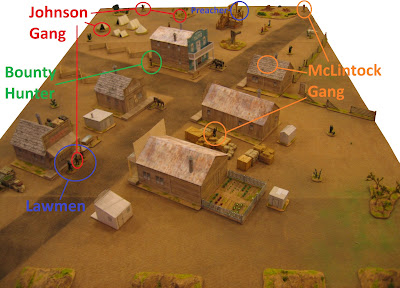 The notorious outlaw "Buck" Johnson has been sentenced to death and is due to be hanged.  The game involves 4 factions, each with differing objectives.  Importantly, most of the groups don't even know who the other factions are, let alone what is their intent.  So here's what each side was told: 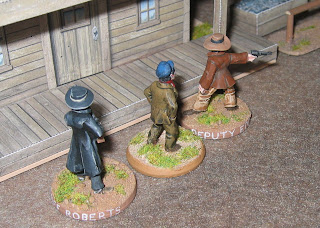 Right from the start, Sheriff Roberts and Deputy Eddie hustled their prisoner along the street.  There were 2 lawmen here so the group could move whenever either of their action cards came up.  This happened a lot early in the game; they also rolled consistently high for their moves.  No casual moseying here!
(This isn't the ideal figure for a prisoner with his hands tied behind his back, but it's the best I could come up with at short notice!  Also, I realised on examining the photographs that this trio had started from the Trading Post and not from the Jail as intended.  Bother). 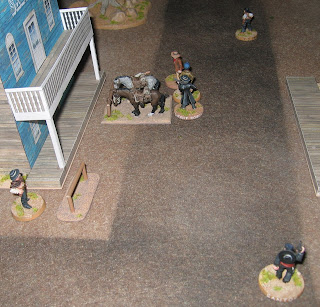 As they passed in front of the saloon, several men fell in around the small group.  The sharp eyes of the sheriff spotted a couple of members of the McLintock gang, though he didn't recognise the cigar-chewing stranger with the poncho.  Playing it cool, the lawmen continued as if nothing was amiss. 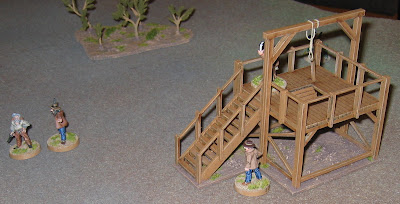 Reverend Adams, the mad hellfire preacher, was waiting on the gallows for the condemned man to arrive.  He had also spotted trouble, this time in the shape of a couple of members of the Johnson Gang.  Like the sheriff, the preacher bided his time... 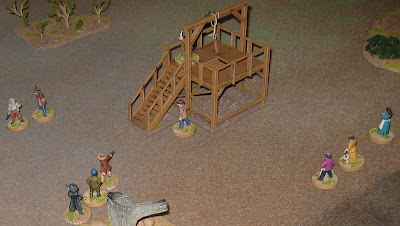 The would-be rescuers were slow to react; before they knew it, the lawmen had forced their prisoner up the steps and onto the gallows! 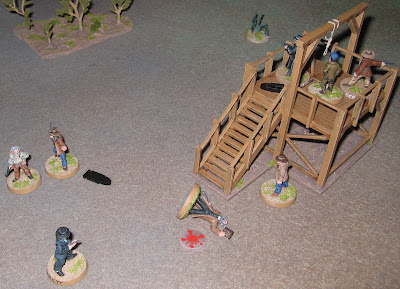 Once on the platform, Sheriff Roberts asked the preacher to say a short prayer.  However, the preacher had other ideas.  His crazy as a loon attribute kicked in and he turned into a terrifying wildman!  Without hesitation, Preacher Adams strode down the stairs, intent on confronting the two good-for-nothings near the foot.  As he walked, he started to rant: "REPENT, FOR THE DAY OF RECKONING IS NEAR FOR YOU!  Did you come here to see your friend die?  Think instead of your OWN souls!  Praise the Lord, for hellfire and damnation await for SINNERS such as you!"

Old Pete was unimpressed by this bluster, but the rookie Jebediah was shaken.  He drew his pistol and fired hastily at the frothing preacher; one lucky shot hit and severely injured the madman. 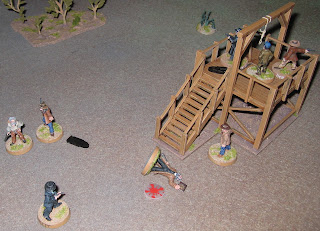 Immediately, the sheriff fired his shotgun at the Johnson gang, but missed.  Deputy Eddie quickly slipped the noose over the condemned man's head, while various members of the McLintock gang started to approach from the street side.  As for the bounty hunter, Blondie, he was daydreaming today and was still passing the saloon, unaware of all the happenings. 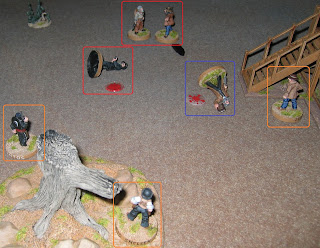 While the lawmen busied themselves on the gallows, the McLintock gang revealed themselves!  Santos (McL) shot Emmett (Jon) in the back - but although the legend was knocked over, he wasn't out of the fight.  After this, shots started to fly everywhere (ineffectually, mind!) as the 2 gangs fought it out.

Sheriff Roberts used the distraction to reload his shotgun.  However, Deputy Eddie used his time to run to the other side of the platform and pull the lever.  Suddenly, Buck Johnson was dangling at the end of a rope!

Well, we were only just over an hour into the game at this point.  If the condemned man was hanged then the game was over - and I'd have to fill another 50 minutes or so with something else before the club night ended.  Quickly, I ruled that the hanging had been done in haste and so the victim was still alive, at least until the end of the turn (in The Rules With No Name, the turn ends when the Joker activation card is drawn, whether or not all characters have had a move).  I also decided that in the best tradition of Hollywood movies, it would be possible for someone to shoot through the rope and release the captive, although at a considerable penalty! 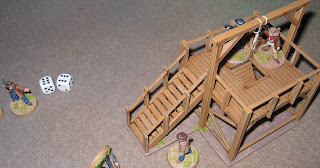 Jebediah (the Johnson gang's rookie) got the next activation.  He saw that his boss was in trouble and sprayed bullets in the general direction of the gallows.  Unbelievably, he got 2 hits on the rope, immediately severing it and setting Buck free.  Jaws were dropping all round the table at this feat! 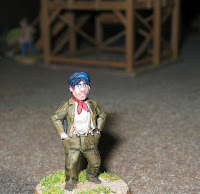 Of course, Buck then got the next activation after this.  He didn't wait to be asked, but legged it as fast as he could with his hands tied! 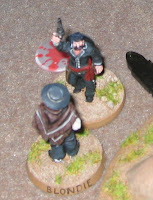 Blondie had finally realised that something was happening.  He crept up behind Santos (McLintock gang) and tried to arrest him.  The bandit had emptied his gun and couldn't shoot, but he wasn't about to give in to the bounty hunter.  A struggle ensued, with Santos ultimately capitulating (not helped by being shot from behind by one of the Johnson gang).

The McLintocks weren't about to let their hated enemy escape!  First to react was Kid Shelleen; he ran after the fugitive, blazing away with twin pistols.  However, his aim was atrocious and he achieved nothing other than a lot of smoke and noise as he emptied both guns.

Next it was the turn of the big man, Jesse.  He decided to tackle Buck in hand-to-hand instead of shooting him.  In a stunning display of dice rolling he achieved 4 hits and completely flattened the escapee.  Don't make this man angry!

As the sheriff made his way down the steps of the gallows, the remaining members of the Johnson gang scattered.  Jebediah started to run away and Old Pete moved slowly towards his downed boss in a last-ditch effort to rescue him.  Emmett had just stood up from his earlier wound when the sheriff fired at point blank range; the outlaw received another 3 wounds and went down for good.

Sheriff Roberts then ran after Jebebiah.  Since his shotgun was empty, he drew his pistol and fired, but missed.  The sheriff then charged the terrified rookie and pummelled him to the ground. 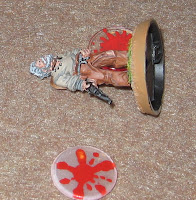 Blondie challenged Old Pete as he made his way towards the condemned man.  The outlaw refused to surrender and was riddled with bullets instead.

Finally, the remains of the McLintock gang (Kid Sheleen and Jesse) fled and escaped - but not before giving Deputy Eddie a bit of a kicking.  They may have hated the Johnson gang, but these other outlaws had no fondness for lawmen either!

So, the final standings were as follows: