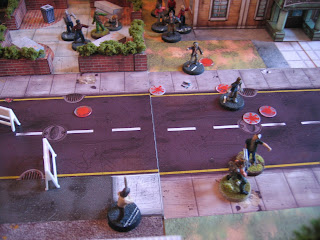 Recently, I was asked where I obtained my "splat" markers.  These can be seen in many of my battle reports, especially for All Things Zombie (ATZ).  The picture above comes from one such game; each marker shows where a casualty has occurred.  From the pattern that builds up it's easy to see where the hottest action has occurred!

Well, the splat markers are home-made, so you cannot buy them.  The good news is that they're really cheap, very easy to make and take only a few seconds each to paint.  Here's how I do it:

I bought my counters from EM-4, though I'm sure that other suppliers of "game accessories" will have similar products.  At the time of writing, a pack of 12mm clear counters costs £1.02; each pack holds 50 of the disks.

For the splats, I use a bright scarlet acrylic paint that has been on my bench for years.  Indeed, it's become a bit too thick for most purposes, but works just fine for this.  If you want a less cartoon-like appearance then perhaps a darker red might be more appropriate.  Also note that I don't use my best paintbrushes for this project!

Paint goes on in 4 simple steps.  Once you know what to do, it only takes 10 or 20 seconds to finish each token.  So: 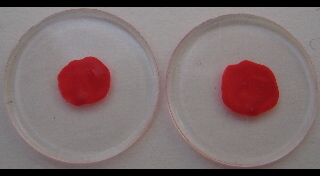 Paint a dot in the centre of each counter.  I make my initial red circles about 1/3 of the diameter of the whole token. 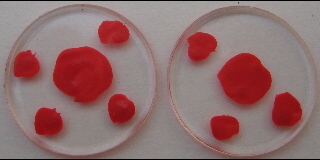 Put some slightly smaller dots around the edge.  I use between 3 and 5 typically.  Don't space them out evenly; a bit of randomness is good here. 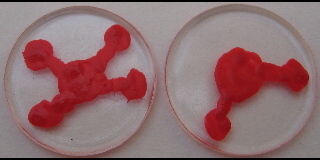 Join the "edge dots" to the centre.  Again, try not to have geometrically-precise lines. 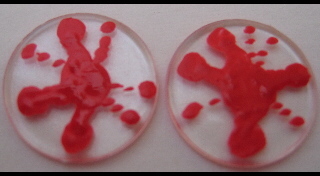 Place 3 to 5 much smaller dots around the rim, in the gaps between the "edge dots".  Connect these to the centre with a dotted or dashed line (everything radiates out from the centre of the counter).

Leave to dry.  You're done!

The finished markers can be used to indicate the position of bodies.  This is especially useful in a game with a high casualty rate where you don't have enough models of dead people!  They can also be used as wound markers if your game has units which can take multiple hits.

Email ThisBlogThis!Share to TwitterShare to FacebookShare to Pinterest
Labels: ATZ