It is another October Sunday, so it's time for a Zomtober post!  By this time, I imagine all my readers know the drill... 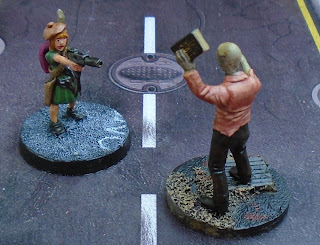 Here's a confrontation between May, a small Girl Guide (Girl Scout in some parts of the world) and a fairly ordinary adult zombie.  I'll call him "bible-waving zombie" (BWZ for short), since the book he has in his hand is just about the only thing to make him distinct from any others of the walking dead. 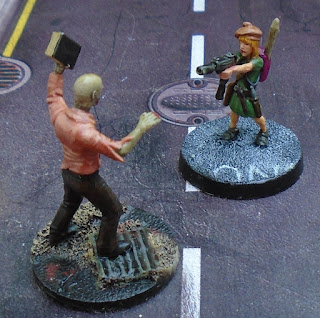 BWZ is constructed from a Studio Miniatures plastic body and head.  From memory, I took the arms out of a different kit; probably one of the old Wargames Factory ones.  He's a fairly plain "lurcher", though he carries a fairly large bible in one hand.  It's not obvious how he came by this item, but he seems intent on using it as a makeshift club.  Or maybe BWZ has simply forgotten that the item is in his hand? 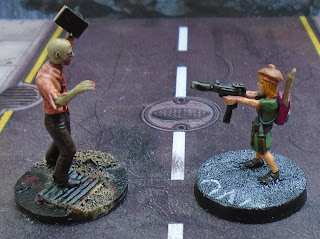 May is, I think, a bit unusual for a Girl Guide.  She has acquired a firearm from somewhere - I think it looks like a silenced machine pistol.  She's bracing the gun in both hands and appears to be aiming appropriately.  However, just in case the zombie escapes her initial attention, May also has a knife in a sheath attached to her belt.  Indeed, she seems to be living up to the Girl Guides' motto: "Be Prepared"! 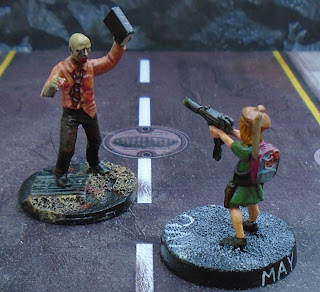 Just to show that she hasn't left all childish things behind, May is wearing her favourite purple and blue satchel - the one with the pink unicorn design on the back. 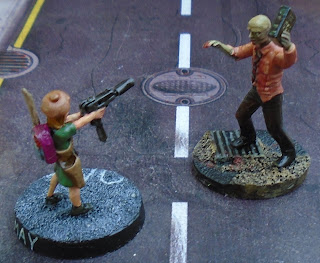 So, does the zombie have a chance?  Is May completely in charge of this situation?  Usually when I pose one of my Zomtober duels the outcome is in doubt, or at the very least an argument can be made for either side to be victorious (or neither, which is quite a popular choice!).  However, this pairing seems to be much more one-sided.  Or is it?

What do you think?