If you've been following my blog for any length of time then you may remember my "6 Projects" meta-project.  The idea was to document progress on 6 hobby activities that I had undertaken at the same time.

Having so many works-in-progress at the same time should allow me to make good use of time waiting for paint or glue to dry; if one project was stalled then I could just work on another one!  Also, I hoped, there would be something of interest for most every reader in there and the encouragement thus generated would spur me on.

Well, that was the plan!  For a few weeks, I stormed ahead and completed 5 of the 6 sub-tasks quickly and easily.  But then I suffered the hobby equivalent of a breakdown and all but gave up for several months.  Even my blog postings have been infrequent and sparse over this period, though I never stopped completely.

Well, I can now announce (finally) that the 6 Projects task is complete!  This article is the last thing I do before I can close off that stream of hobby work.  You can only imagine the sense of relief that I am feeling right now! 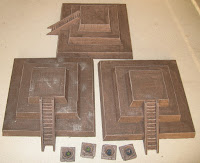 Remember these?  I finished all of the first 5 collections of models in the meta-project many months ago, pretty much meeting my self-imposed targets.

I'm very pleased to say that the 6th and final task of my 6 Projects effort has now been completed.  These are the Frostgrave figures for my "blue" warband and they are largely responsible for killing my model-making mojo.  It's not any fault of the models themselves, but simply that I found the amount of detail on them to be somewhat off putting when I was feeling under pressure to achieve my various goals.

Actually, I finished these figures about 3 weeks ago.  However, I then went away immediately for my annual summer vacation (to Galloway) and wasn't in a position to document the achievement until my return.

You'd think that I had had enough of Frostgrave models for a while, wouldn't you?  Well, I took some sprues on holiday with me and in some quiet moments between sleeping, hiking and cooking I built another 8 figures.  These will form my "red" warband when/if they are eventually painted.  Who knows - I might finish these really quickly.  It could happen...
Posted by Colgar6 at 19:27 19 comments:

Email ThisBlogThis!Share to TwitterShare to FacebookShare to Pinterest
Labels: 6 Projects 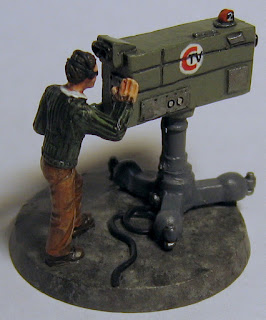 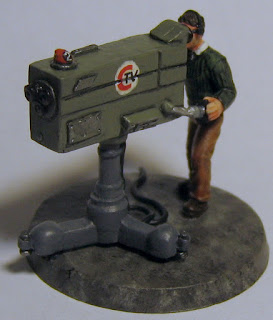 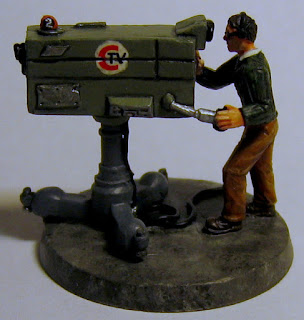 I've finished off a number of models recently.  This has left me unsure which I should show in my Sunday post; should I tell you about my 7TV cameraman or my Frostgrave "blue" warband?  Eventually (and somewhat obviously, given the title of this article), I chose instead to display my Kodama warband for Super Dungeon Explore.

I'm really pleased with the way that my Kodama turned out; see what you think.

All warbands in the Super Dungeon Explore game have either 1 or 2 spawn points.  These are the locations where replacement troops are placed, thus providing the heroes a near-endless supply of enemies.  For the Kodama (animated plants), the spawn point is called the Old Growth Hollow; they get 2 of these:

Now, I think that the Old Growth Hollow is one of the creepiest models in the game.  Not only does it look damp and decayed (those bracket fungi only grow on rotting wood), but it is surrounded by skulls and glowing green crystals.  There's definitely something not right here!

An SDE warband has (typically) 6 low-grade foot soldiers.  In the game, these are collectively called "minions".  For the Kodama warband, the minions are called "Mooks"; they look something like a very angry cabbage or cauliflower!

You can see some "work in progress" shots of my Mooks in the article I wrote recently on blending.  It might be interesting to compare these shots of the finished models with the incomplete versions in that post.

The Kodama are spoilt for choice when it comes to Elite warriors.  Many warbands (not all) have 2 types of elite, but the Kodama have 3.

First up are the Turnipheads.  These are best used as support troops; their medicinal radishes can be used to heal their friends.  They also have some ranged attacks, but they're not especially good at hand-to-hand combat.

The second class of Elite model in a Kodama warband is the Wisp.  These are not plant-creatures at all, but rather are sylph-like, magical woodland creatures with the power to lead travellers astray.  Again, they don't do well in melee combat, but these spirits have magical abilities and can easily compel adventurers to stray into bramble thickets or into the reach of some more violent foe.

Finally, a Kodama warband also has access to a Sprout (the little green guy in the pictures below).  Now the Sprout isn't particularly terrifying; it's not very good in hand-to-hand or ranged combat, it doesn't have any real magical powers and there's only 1 of it.  However, if it is destroyed or if it chooses to do so then it can shapeshift into King Sprout.

King Sprout is a terrifying monster whose tendrils & roots can reach quite some way; it is also large enough to block many passageways and thus force the adventurers into confronting it.  Indeed, King Sprout's only real disadvantage is that it cannot move, so the Sprout had better be in the right place when it shapeshifts else the heroes will just ignore it and go some other way!

The Kodama are an interesting bunch.  Most of their models don't have a lot of hitting power (though they often have the Virulent ability which gives them bonuses against a hero who is already poisoned).  However, their elite warriors have a lot of abilities that can be combined to produce some really interesting tactics.  An obvious example might be to block a passage or doorway with King Sprout, with a pair of Turnipheads behind to heal it every time it is injured.  Let's see what the heroes make of that!
Posted by Colgar6 at 19:50 8 comments: