I have been aware of Studio Miniatures for a considerable time and am in awe of the excellent 28mm zombie and survivor figures they produce.  To my shame, I'd never bought any of these.  Somehow they were always near the top of my wish-list but never quite made it from there to a purchase.

6 months ago or so, in the middle of 2012, Stuart of Studio Miniatures announced a crowd-sourced campaign on Indiegogo to produce a set of plastic, 28mm zombies.  At the time, the only alternative zombies in plastic were the original set from Wargames Factory, which are usefully cheap but are not the best-sculpted figures.  I immediately made a pledge to the Studio Miniatures campaign (albeit not a very large one) and sat back and waited for what seemed to me very generous rewards.  Well finally, last Thursday, a package arrived for me... 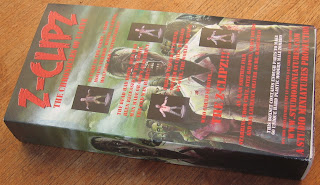 My first thought on seeing the box was "goodness - it's huge!"  The package was much larger than I was expecting.  This is possibly explained at least in part by some of the wording on the sleeve, where it clearly states that the box contains enough parts to make 60 zombies.  Now, my pledge was for 40 models, not 60, so I can only imagine that Studio do plan (in due course) to sell these to the general public in lots of 60, hence the production of packaging that is larger than immediately necessary. 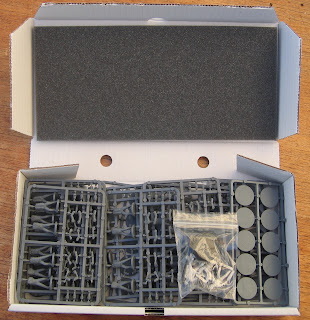 Inside the box were 11 identical sprues of zombies (4 models per sprue), 5 sprues of round bases from Renedra and a small packet containing the 4 metal figures that were offered as part of the $30 pledge level.  That's right: I got 11 zombie sprues and will thus be able to make up 44 zombies, not the 40 I was promised.  I'm assuming that this was a mistake, though a very minor one.  On examining the metal figures, I discovered another error: the survivor model included was not the one I wanted.  I think I asked for the right name, though I cannot verify this since my correspondence on the matter has been mislaid.  Still, I cannot rule out the possibility that it was my mistake, not Stuart's.  Oh, well - I'm not too bothered overall. 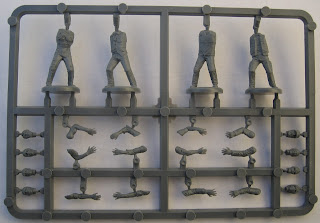 Each sprue contains 4 different bodies, 6 pairs of arms and 8 heads.  This should allow quite a range of combinations to make a collection of zombies look a bit less uniform.  The bodies are fairly static in pose; this suits a shambling horde very well (for contrast, see the Zombie Vixens set that was recently released by Wargames Factory; they have some very distinctive poses).

The zombies portrayed by this set are fairly fresh, I'd say.  With the exception of 1 body, there are only a few minor tears in the clothing and most (not all!) of the heads and arms do not show signs of major trauma.  Indeed, I've been toying with the idea of making some survivors out of 1 sprue, just to see how well it would work.  Finding suitable weapons or other equipment is possibly the hardest part of such a conversion.

So, how do they look when finished?  Here are 4 that I made up and painted quickly.  I have a number of observations from this experience:

So how do the new Studio Miniatures plastics match up with other well-known brands of zombies?  Here's a comparison shot, above.  The Studio Miniatures figure is taller than most, cheaper than many and less chunky than some.  I'll use them alongside all my other models without any worries, though the height and style differences may be of concern to some people.  Still, plastics are cheap enough to enable a large horde from just a single manufacturer; the Studio Miniatures models are admirably suited to that.   I expect we'll see a lot of these models appearing in people's games in the future!

Update: you can see some more painted examples of these models here.