Regular readers of my blog will already know that I'm a fan of adding a bit of colour and narrative to the games I run.  Often this involves having some form of random events which probably won't change the overall course of the game, but may well throw a spanner in the works for someone.

A little while ago, I announced that I was working on a complete deck of random events for Full Thrust (http://colgar6.blogspot.com/2013/01/full-thrust-event-cards-initial-version.html).  This preliminary version has been used in a number of my games and some changes have been made as a result.  In fact, I completed the final design many weeks ago and have been waiting ever since for delivery of the printed deck.  Well, the postman finally dropped the finished item through my letterbox this morning.  It's here!

The event deck is based on a regular poker pack and therefore has 54 cards in it.  However, that's the end of the resemblance; there are no spades, hearts, diamonds or clubs to be seen!

The back is a fairly simple design of my own: 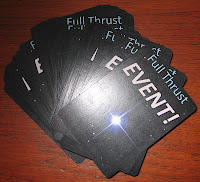 Since holding these in my hands, I've realised that the lettering is really too close to the top of each card.  It's a minor annoyance and I've already corrected that in my uploaded designs.  Obviously I cannot alter the deck that's already been printed, though. 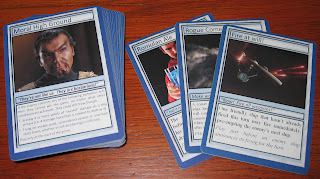 Like my Full Thrust games, the events on the cards mostly (but not entirely!) have a Star Trek theme.  The colour depth and resolution of the printing is generally very good, though 1 card had a few disappointing marks on the back.  Some of the more verbose cards have text that is a bit smaller than I would like, but it's still legible.  In any case, that's my fault as the designer rather than being an error by the printers!

Oddly, 1 of the cards (and only 1) has its front printed upside down with respect to the back.  It's still quite usable, but I'm puzzled as to how this happened since my source materials do not have this fault.

Full Thrust doesn't have any built-in random events.  Instead, I use the same mechanism as the Doctor Who Miniatures Game.  In that set of rules, each side is dealt 3 cards at the start of the game.  These may be played at any appropriate moment, but once played they are gone; the owner does not draw more cards to replenish his/her hand.  Personally, I limit each side to playing at most one card per turn, though I would make an exception for a "response" card such as "That's not fair!". 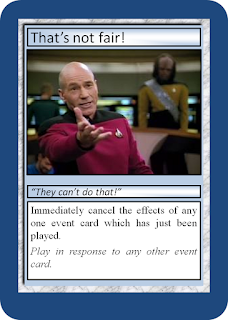 If you wish to obtain this deck for yourself then you have 2 options:

I'd be delighted to hear what you think about this idea, or about general mechanisms for adding a little uncertainty to games.  It's surprisingly easy to make a deck like this, though it does take time and a certain amount of imagination.  Anyone could do it!
Posted by Colgar6 at 14:57