Exactly a month ago, I asked on The Miniatures Page if anyone knew how to make cranked fence posts out of MDF or any other cheap material.  I had a desire to build a fenced army camp (see also my Quonset huts) for an upcoming game of All Things Zombie.  Now, many gamers build chain-link fences from simple uprights such as bamboo skewers and these look fine from a distance.  However, I wanted to go a step further than this and model something that would bear a closer inspection. 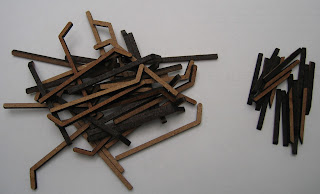 It turns out that it's not hard for someone with a laser cutter to process a small, custom job - as long as you provide them with the source file for your design.  In this case, the parts that I wanted were very simple shapes and both Corsec Engineering (USA) and Minibits (UK) offered to cut them for me.  I went with the UK company, solely on the basis that the postage costs should be lower.  A couple of weeks later, after a few exchanges of e-mails with Leon at Minibits to determine exactly what would be done and how much it would cost, I received a bag of parts in the post.

Now I was excited; I had all the parts to make my fences - or did I?  It was immediately apparent that I hadn't thought about how I would base the fence posts.  OK, this was easily sorted: I cut out a series of 1" wide strips of MDF for basing.  These were of varying lengths: some were 6" and some 12".  I am nervous about warping in the longer lengths; so far so good - but only time will tell for sure.  I also cut out a pair of 'L'-shaped 90 degree corner bases.  The edges of the bases were chamfered roughly to remove the obvious 3mm step.

Next, I wondered how to fix the posts.  Initially I had thought of pinning them, but a quick experiment showed that the thin MDF posts were far to fragile to drill holes in.  Instead, I sank holes at 1.5" intervals along the centreline of the bases to act as sockets.  This does, of course, reduce the height of the posts by a couple of mm, but the joint is then quite secure.

OK, the uprights were now glued in (taking a lot of care to make sure that they were vertical!) and supports were fixed to every 3rd post.  Then it struck me: how do (authorised) people or vehicles get from one side of the fence to the other?  I'd completely overlooked the need for a gate!

So, a quick improvisation here: the gate section needed a larger gap than normal between the posts.  Also, the gates needed to hinge.  To that end, I added a couple of short pieces of tubing to each of the inner supports.  The gate pieces themselves would have some bent wire sticking out of the side; this would rest in these tubes and allow the gates to swing freely.  The 2 parts to the gate itself had to be scratch-built and this took quite a lot of effort.  It would have been much simpler had these also been laser-cut MDF, but that hadn't occurred to me at the time! 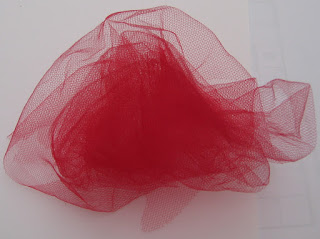 While I was considering what to use for the chain link mesh, my wife handed me a piece of fine plastic net that had blown into our garden from somewhere.  It's the sort of material that is used for veils at weddings, or perhaps for advanced flower arrangements - I'm not really sure.  "Would this be any use?" she asked.  "Perfect", I thought.

I'd already found some thin brass wire from which I intended to make the barbed wire runs.  This brass wire had been woven around a wine bottle originally, but I'd saved it just in case it was ever needed.  I used an old technique for modelling barbed wire: wind the wire into a tight coil, flatten the coil and pull it straight (but leaving in the kinks). 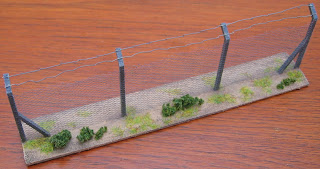 So, here's my first completed piece.  This is OK, so far as it goes, but there are some issues with it:

It's hard to reverse course in the middle of a model-making project.  By this time, I'd attached plastic mesh to most of the fence pieces.  However, I decided that the thin net just wasn't working the way I wanted, so I removed all of it. 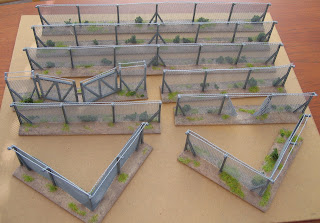 Instead, I replaced it with the traditional aluminium mesh, though sprayed and dry-brushed to soften the colour a bit.  For the wire strands, I remembered that I had a roll of model barbed wire from Gale Force 9, bought for some occasion just like this.  Once the decision was made, finishing off the fencing was very quick.

There is more vegetation on the inside of the compound than on the outside, on the basis that there may be grazing animals on one side but not the other.  I also modeled one section of fence as broken down, though curiously the way the wire has been wrecked suggests that something from inside the base has broken through.  I wonder what it was that escaped!

Cost for this project was £5 for the custom-made MDF posts, £4 for aluminium mesh, £4 (ish) for GF9 barbed wire, plus small amounts of paint, glue, static grass and MDF bases that I had lying around.  So maybe £14 in total, for which I have over 6 feet of fencing.  Was it worth it?  I think so, but you'll have to decide for yourself!