It's been a while since I posted anything.  The truth is, I just didn't feel like blogging - either authoring or viewing other people's offerings.  It was always something I thought I might return to, though - I never gave up all hope.
So let's see how I feel after this: a straightforward cataloguing of my (as yet unbloodied) Saracen warband for SAGA. 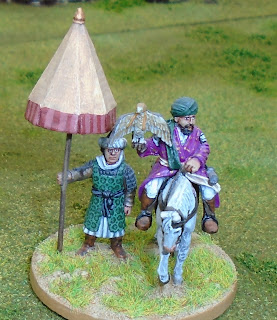 The boss of this outfit is Iftakhar.  He's a subtle, refined character with many talents.  Just because he enjoys poetry and hawking doesn't mean that he's not quite capable in a fight as well!
The mounted model is from Perry Miniatures, whilst the bodyguard with the parasol is (if I remember correctly) from Eureka.

One box of Gripping Beast's "Arab heavy cavalry" has been used to make the Saracen hearthguard.  I've modeled most of them with shield and lance (or sword or mace) and a few with bows in hand.  However, many of the former also have bow cases and could be used as either missile or melee troops.
If anything, Saracen nobility are even more gaudy than samurai!  These have all been depicted with expensive, patterned clothes and horse trappings.  Thank goodness I only had a dozen of them to paint! 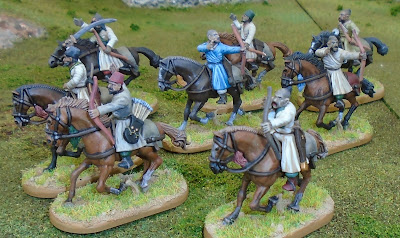 In contrast, the light cavalry (mercenary Turcoman archers) are much more drab.  Again, these were built from a Gripping Beast plastic box - which suggests that I must have another 4 models somewhere since the kits come as a set of 12 figures.  Hmm - I wonder what I've done with them? 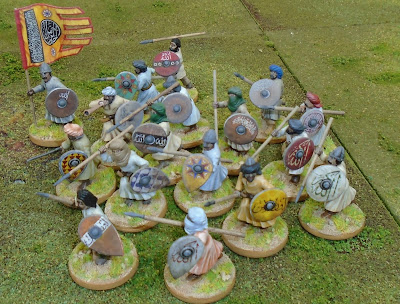 I have a substantial core of basic spearmen for my Saracen warband.  Again, these come from a box of Gripping Beast's plastic Arab infantry - apart from one extra metal figure which I think might be an early casting from Gripping Beast.

A dozen archers (the rest of the figures from the box of Arab infantry above) provide some missile power.  Mind you, these are probably less-than-enthusiastic levies and so shouldn't be relied on too much... 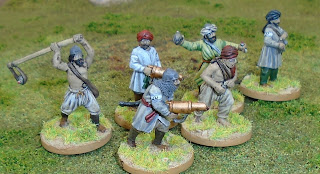 Finally, I have some naffatun - foot soldiers with fire pots or primitive flamethrowers.  Such weapons are mentioned in early medieval texts, but I believe they are not described in any detail.  Consequently, the inclusion of these in any game is somewhat conjectural, if not completely fanciful!  Still, they're usually given rules which make them as dangerous to the thrower as to his enemies.  I'll include them in my force because they add a bit of local "colour".
From memory, my naffatun models are a mixture of Perry Miniatures and Gripping Beast. 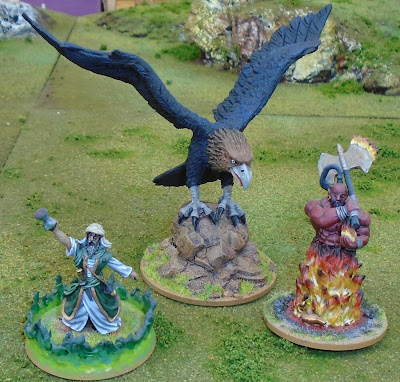 So, SAGA has this supplement entitled Age of Magic.  It seems to me that the easiest way to play this (starting from my existing collection) is to add a few fantasy elements to an otherwise "historical" force.  Consequently, I've modeled a sorcerer, a roc and a genie (jinn).  Any before anyone points it out, I haven't yet obtained a model for the very obvious man-on-a-flying-carpet!
I haven't stopped to work out what part each of these might play in a game of Age of Magic.  The wizard is obviously a magician and I suppose that the genie could also be a magician.  I don't know about the roc, though.
All three of these models come from Shieldwolf Miniatures and can be found in their Araves range.

On the whole, I'm quite pleased with this warband.  I have another hero (on foot) still to finish painting and I might yet want to add some more fantasy elements, baggage & other objective markers.  But what I have completed is mostly well done - certainly good enough for my liking.
Posted by Colgar6 at 21:12 11 comments: