Some of you may remember that I started a project to create a set of random events for All Thing Zombie (ATZ).  I initially announced this to the world at the start of June this year, some 2.5 months ago: atz-event-cards.html .  My intention was to generate 54 different events, turn them into designs for cards and then have them made into a deck of cards by one of the "print your own" shops that have sprung up on the internet over the last few years.


Well, the time has now come to announce a successful conclusion: they're here!

I will describe how I designed these cards in another article some time (if there's enough interest), but for now I just want to show you the finished result.  Update: article on card design is here.

Soon after my return from holiday at the end of July, I uploaded my designs to and placed an order with Artscow.  I could have done this a little earlier, but that company has periodic discounts which are well worth waiting for, at least in my opinion.  Artscow are also very quick to fulfill orders.  Despite being on the other side of the world, I received my cards within a week or so!

The deck comes in a fairly plain, green box.  That's OK; I could have paid extra to design my own box, but I didn't wish to do so.  Indeed, I might even use a plastic deck box for them; I've not really decided yet. 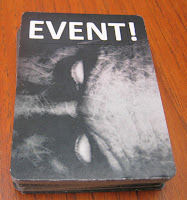 Inside the box are 54 cards.  These all have the same back (of course) and I'm slightly annoyed to notice a stray, dark rectangle near the "EVENT!" text.  I've gone back to my original source files and corrected this, but it's irritating to see it on the printed version.  It's entirely my fault for not proof-reading the card back as carefully as the fronts and I won't let it stop me from enjoying them during games of ATZ! 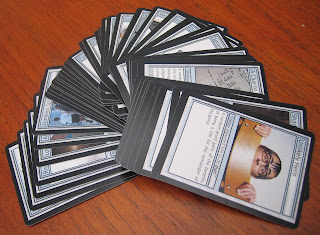 Here's how the front of the cards look.  I'm not going to display every one (it would take far too much time and space!), but this should give an idea.  The cards are printed on thinnish material, but not unusually so.  Unlike regular playing cards, they won't be repeatedly dealt and held in hands, so I don't expect any problems with durability. 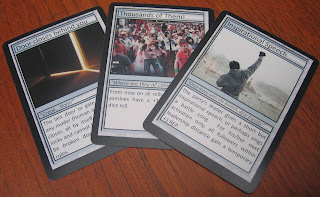 This is a closer view of 3 of the random events.  The resolution of the text and the colour depth is excellent; I'm very pleased indeed with the result.

How to use random events in ATZ is described in ATZ:BDTZ, though for simplicity I'll repeat it here.  Each time the initiative dice come up as double-6, choose and apply an event.  If I'm playing with more than 2 factions then for this purpose I use only the initiative dice for the first 2 factions (typically player characters and zombies).  If using the deck, choose an event by drawing a card rather than by rolling on the table in ATZ:BDTZ.  Don't worry; the original events from the rulebook (or adapted versions of them) have all been included in this deck.

The random events themselves are intended to add colour to the story, rather than to penalise one side exclusively.  As such, some events favour the zombie side, some favour humans and some are strictly neutral.  Anything could happen!

If I've understood correctly then anyone who desires can order my deck from Artscow by following this link: http://www.artscow.com/gallery/playing-cards/atz-event-cards-dfkuuc7ri4ha .  You'll have to open an account with them first, of course!

[Edit: alternatively, the source PowerPoint file for the deck can be downloaded for free, ==> Here <==]

With modern computers and do-it-yourself publishers, it's quite easy to create your own game aids.  It's also cheap; this project may have taken quite a bit of my time but has cost very little money.  The sense of satisfaction that I feel when I hold the almost-professional result in my hand is hard to describe.

I'd like to say a word or two about those who showed an interest in this project, especially during the early days when it all looked fairly crude and amateurish.  The encouragement I received has really spurred me on to do the best I could.  Thank you!

Making custom card decks for your games is simple; if I can do it then so can you!