Recently, we started playing the "Mungo Mah Lobeh"/"Throne of Thunder" campaign for the Congo game rules [published by Studio Tomahawk].  So far, we've only played one game [described here] and that went well enough.

It was obvious during this initial game that we didn't have all the player aids we desired.  More specifically, the campaign introduces some new character types [archaeologist, doctor &c] and these are described fully in the main rules.

For all the characters from the main rulebook, Studio Tomahawk have provided quick reference cards which can be printed out for use during a game.  Sadly, there are no cards available for the characters from the expansion - so I decided to create some myself.  Here they are; you should be able to copy them directly from this article if desired: 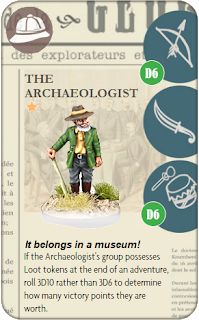 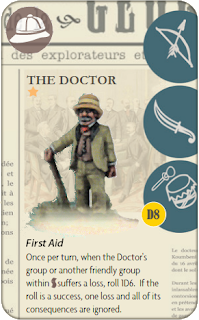 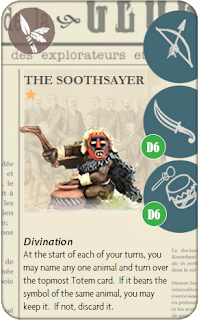 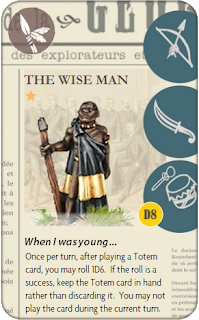 Test of Honour: The Oda Clan

It's been a while since I wrote an article about any of my models.  Indeed, I haven't been blogging very frequently for some months now.  At least in part, that's because much of my hobby effort has been diverted towards preparing forces with which to play Test of Honour.

For anyone who hasn't heard of this, it's a simple, fast-play game of heroic skirmishes, set in feudal Japan.  This is aimed at recreating scenes from classic films such as "Seven Samurai", rather than necessarily being historically accurate.  As such, it promises to be great fun and very much the kind of thing I enjoy!

The Test of Honour box set put out by Warlord Games contains enough figures for 2 basic forces of 2 or 3 Samurai backed by Ashigaru (peasant) troopers.  I've painted up half of the box set with a black-and-white livery and given them "mon" (Japanese heraldic icons) that indicate they belong to the Oda family.  A few other, metal figures have been added to give a little more variety.

A Test of Honour force is led by 1 hero and can have up to 2 other samurai in it.  The 2 figures in the middle armed with katanas are plastic figures from the ToH starter set.  However, I wanted some variety and so there are 3 metal samurai with alternate weapons also in this band.

The metal clubman, spearman and archer all come from Footsore Miniatures.  They're a little bigger and bulkier than the Warlord plastics, but not enough to bother me. 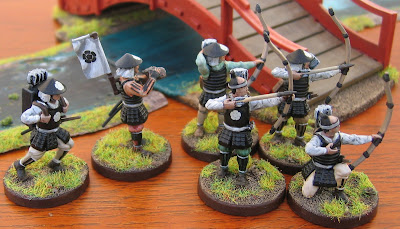 As well as the leaders, my warband includes some troopers for them to lead.  I built the 15 ashigaru in this force as follows:

I felt that I wanted a geisha as well, partly because they are such an iconic part of Japanese history and partly so that she could act as a spy or other scenario-specific objective. 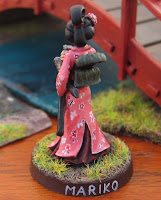 This geisha model is from Hasslefree Miniatures, although (oddly) she's listed amongst their Modern martial artists.  Still, her costume seems traditional enough to me.  This was a refreshingly different model to paint; I enjoyed doing so very much and I'm immensely pleased with the result!

A Word on the Figures

I can't really finish this description without saying at least something about the models involved:

These are the plastics that were originally produced by the now-defunct Wargames Factory.

I've only bought a few metal samurai from Footsore and cannot therefore comment on the rest of their range.  However, here are some observations on the figures I've built. 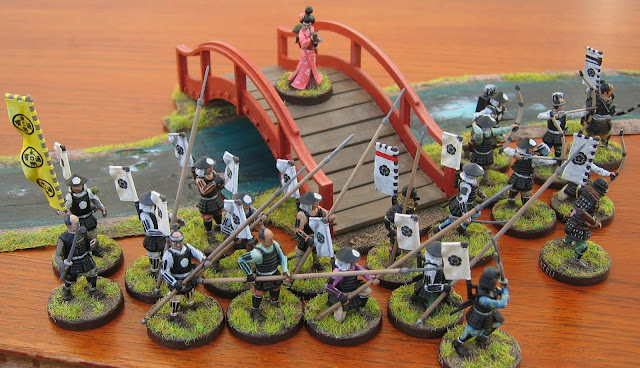 Here's the entire clan so far.  In this picture you can also see my first piece of Japanese-themed scenery (who'd have thought it - a bridge!).

I do have plans to add some arquebuses to the Oda, but these may have to take their turn.  After all, I'm also working on the red/yellow Takeda clan as well as bandit and ninja warbands.  And more scenery.  And some ronin.  And it might be nice to get some warrior monks.  Perhaps some horsemen too...
Posted by Colgar6 at 12:26 18 comments:

What better way to start the new year than to fulfil a long-cherished goal: to play through the Throne of Thunder ("Mungo Mah Lobeh") campaign for one of my favourite miniatures games: Congo?!  Steve came round to visit yesterday, so we launched into the first game. 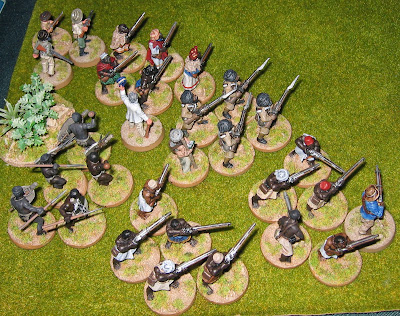 We decided that I would take the White Man Expedition, headed by the late Victorian adventuress Mary Kingsley.  In the brief pre-game sequence (2 dice rolls), I achieved the following: 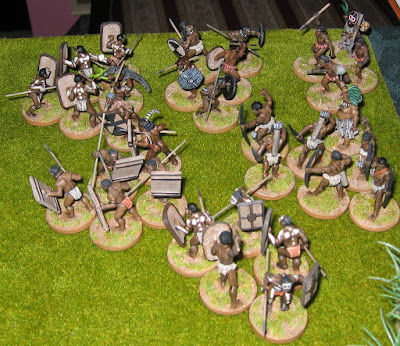 Steve would be in command of Ujuwa, the xenophobic witch doctor.  As well as his band of acolytes, the pre-game rolls gained him the following benefits:

Starting from opposite corners of the board, both forces would visit the village of Maskouii, where they would attempt to make money by trading with the natives for carved, wooden masks.  There were also a number of areas of dangerous terrain (the mealie plantation, the wooded hill, the cattle enclosure, the large trees, the rocky circle) where discoveries might possibly be made.  Of course, it might be easier to achieve some of these objectives by eliminating the opposition first... 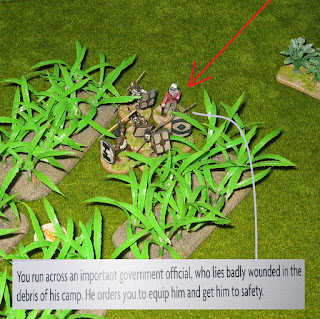 Right from the start of the game, the witch doctor's followers scouted all the dangerous terrain areas they could reach, looking for useful discoveries.  In the field of mealies, they came across a government official who needed assistance.  Rather than just assegai-ing him on the spot, they helped the man to his feet and escorted him to safety (thus earning 2 easy-to-come-by victory points!). 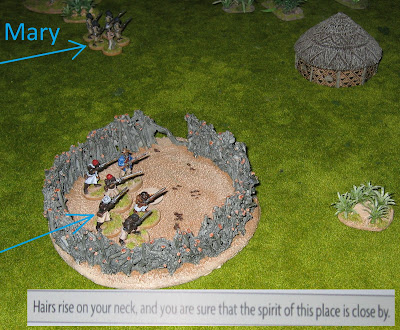 Seeing that the forest tribesmen were concentrating on the outlying areas, Mary and her escort ran for the village.  If they could reach the huts first, maybe she could buy up all the masks?  Perhaps this was a bit optimistic, but it seemed worth a try.

In parallel, her kirangozi (local guide) led the expedition's full-time ascaris through the cattle enclosure.  They didn't find anything useful there, but couldn't help feeling that there was something creepy about the place... 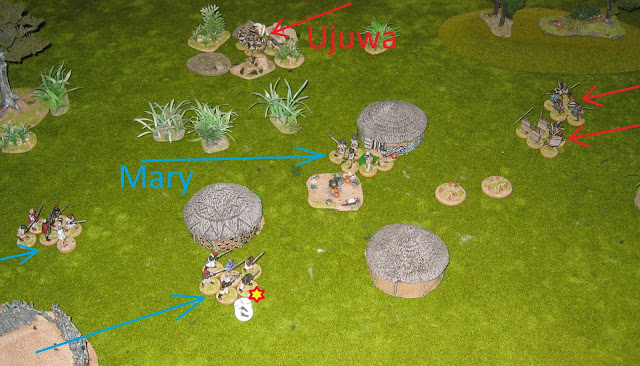 In the dash for the masks, Mary and her group reached the furthest hut before any of the tribesmen.  They seemed somewhat isolated, though - in his haste to join them, the kirangozi used his special ability to extend the move of the ascaris, but one of them sprained an ankle and brought the group to a halt (in other words, they drew a stress token for the extra distance - and the counter was movement stress.  This group suddenly went from being the fastest bunch in the game to the slowest, much to my chagrin).

Now that Mary had obtained her first mask from the seller at the hut, her soldiers fired a warning volley at the approaching warriors.  At least, Mary ordered her men to fire over the heads of the natives; it seems that the soldiers had other ideas!  Despite throwing themselves to the ground in a last minute attempt to avoid the bullets, three of the tribesmen were killed. 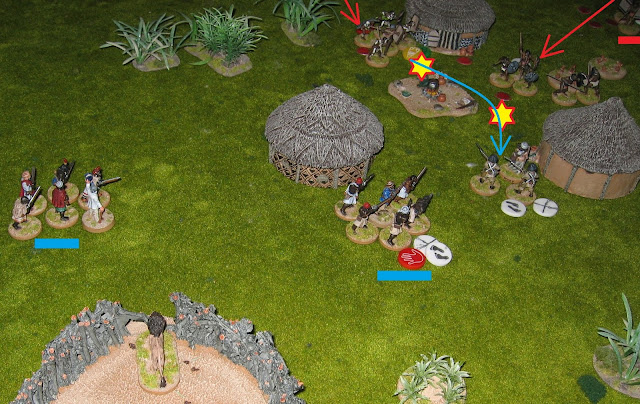 This seemed to annoy Ujuwa and his followers intensely.  Firstly, the witch doctor and his bodyguard charged into the back of the soldiers, screaming war cries and insults.  When the soldiers retreated in disarray from this assault, another group of warriors attacked them.  Despite Mary using every trick she had (pacifism and barter) 2 soldiers fell and the remainder were chased out of the village.  Worse (for the white lady), Ujuwa now had the mask as well as handfuls of trade goods...

No help for Mary was forthcoming from the kirangozi and his ascaris.  As well as the twisted ankle, these stalwarts decided that this would be a good time to quake with terror and wail at the vagaries of fate (a successful terror attack by the forest tribe saw them draw a red 'panic' stress token). 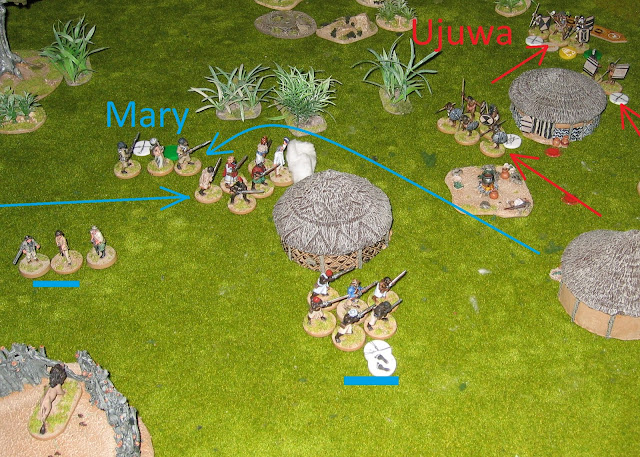 Mary was determined not to leave the village empty-handed.  One of the villagers decided that it was too hot to sell masks today (I'm sure that the aggro on his doorstep had nothing to do with this decision!), but the third vendor was still there.  Mary and her last 2 soldiers ran past his front door, threw some trinkets at the seller, grabbed the mask and hightailed it out of town.

Ujuwa was happy enough to leave as well.  After all, he had one of the available masks (taken from Mary at spearpoint) as well as a goodly lot of trade goods - and his followers had showed the white imperialist and her lackeys that they weren't to be taken for granted.  The warriors covered his withdrawal, but there was no more fighting anyway and this turned out not to be strictly necessary.  Shortly after this, Ujuwa met up with the European mask collector and sold the trophy to him.

Just then, a lion appeared in the cattle enclosure.  No wonder that Mary's ascaris had felt unsettled when crossing there earlier! 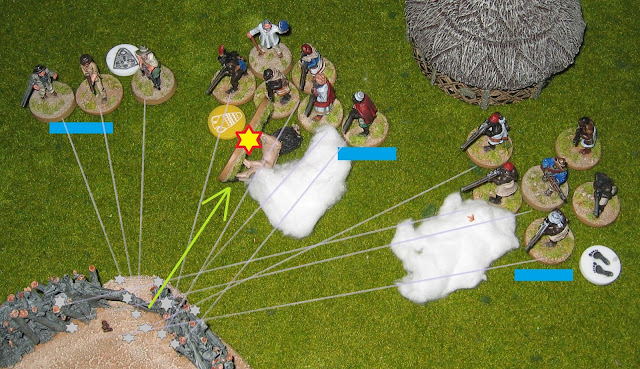 Since they were otherwise unoccupied, half of the white men column formed a firing line around the livestock pen.  However, despite the intense fusilade, not a single bullet hit the lion.

The animal, tired of the noise and irritated by the heat of the day, finally decided to charge.  The white hunder/adventurer types were struck with terror when the beast bounded at them, but it backed off without maiming anyone.  It then charged into the Ruga Ruga, but these fellows were stout of heart - they slew the lion easily with their knives.

We called the game at this point.  There was no realistic prospect of either side catching and defeating their opponent's (single) mask-bearing group in order to claim a second mask.  Additionally, all the discoveries had been claimed or found out to be dummy markers and no units were engaged with hostiles or even close to any enemies.  In short, there was no reason to fight any more.

Most of Mary's forces never even made it near the village.  In particular, her hired young warriors never moved at all and her 2nd group of ascaris barely did so.  Doctor Heineken didn't have anything much to do and the kirangozi proved to be a poor guide.
Total: 5VP

Like Mary, many of the tribesmen barely moved during the game.  Those that did were sufficient to take the first mask from Mary at spearpoint, though.  Ujuwa's attempts at witch doctor magic mostly failed miserably and his soothsayer provided much cryptic, useless advice from the sidelines.  His big man/chieftain (and he was a very big, fat man) seems to have decided that the day was too hot to walk, let alone fight.
Total: 15VP

So, it looks as if Mary's column was thoroughly whipped.  It was a significant victory for Ujuwa and his native followers.  No doubt word of his deeds will spread like wildfire across the region and ferment more unrest!

Two things strike me as noteworthy about this game: