Santa versus the Hooligans 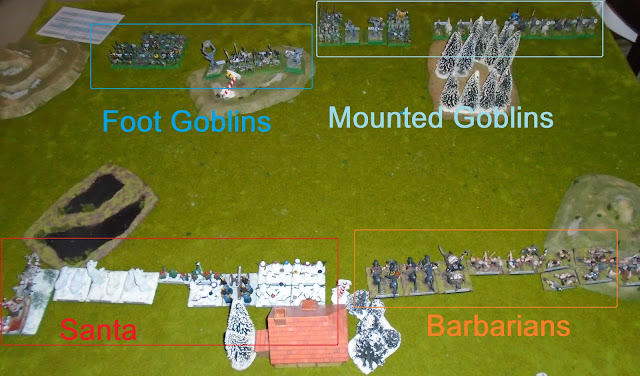 Many times over the life of this blog, I have run a Christmas-themed game of Hordes of the Things.  All of these can be found using this link: https://colgar6.blogspot.com/search/label/Santa .

The annual holiday game didn't happen last year (global pandemic, don't ya know!), but we're back in 2021 with a new battle.  This time, Santa's home is under threat from tribes of goblins and their associated wolves & trolls.  He has allied with a barbarian tribe (probably through promises of extreme feasting and loot, I imagine!) to defend against this threat.

Each of the 4 bands was an independent 24AP army for Hordes of the Things.  The forces of destruction (two goblin armies) were controlled by my friend Steve, whilst the bringers of light and happiness were led by myself and my son.  I took the barbarians, whilst my son took Santa.  He (my son, not Santa!) had just received a vaccine booster shot the day before and hadn't slept well overnight.  This might go part way towards explaining some of the outcomes in the game!

Santa's force is a mixture of elves, toy soldiers, fierce ice bears and hordes of snowmen.  It is described in more detail here: http://colgar6.blogspot.com/2013/12/hott-santas-army.html .

My barbarians have a lot of foot warband elements (as might be expected), some archers, some hard-charging panther-mounted knights and a general mounted on a woolly rhino.

Facing the barbarians we had a goblin force consisting of 2 trolls, hordes of goblins and a large number of wolf riders.  Also, the woods are full of  (unridden) wolves.

[Side note: this force looks like more than 24AP to me.  Oh, well - mistakes may have been made, but if so then it didn't affect the end result, as you will see]. 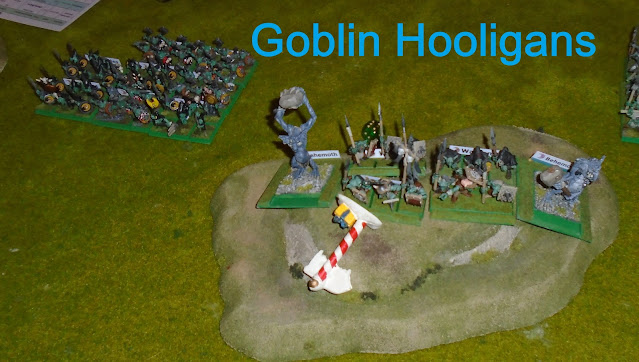 The goblin force facing Santa also had two trolls.  It was lead by some greater goblin warbands and had huge numbers of lesser goblins.  Even when deployed, these vandals pushed over the signpost which led to the North Pole, thus earning the title "the hooligans".

Well, that was an abrupt ending!

So, a well-deserved victory to the goblin hooligans.  Let's hope that isn't an omen for Christmas 2021!

A Merry Christmas and a Happy New Year to all my readers!