Santa: The Battle of 6 Armies

It's that time of the year again!  Just before Christmas, I pull my Santa army from storage and arrange a big battle of Hordes of the Things.  This time, there were 6 armies involved (3 for Good/Jollity and 3 for Evil/Humbug) together with 3 objectives.  To find out what happened, read on...

The 6 Armies: forces of Good

The 6 Armies: forces of Evil 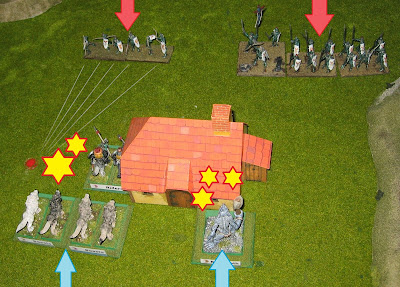 Wolves and a troll surged forwards towards Mrs. Claus' house.  It took the troll a while to work out how to enter, but eventually he (she? it?) did so and claimed the objective for the evil side.  I don't think Mrs Claus will ever get that smell out of the carpets...

The elves advanced to meet this assault; their archers rained arrows upon the wolf riders and destroyed one element.  Firsat blood to the forces of good!

Here's a little extra rule that we used on the day: one of my club mates had brought a large bag of chocolates to the meeting.  I ruled that each time an enemy element was destroyed, the victor could have one.  It certainly gave some real-world consequence to the fights. 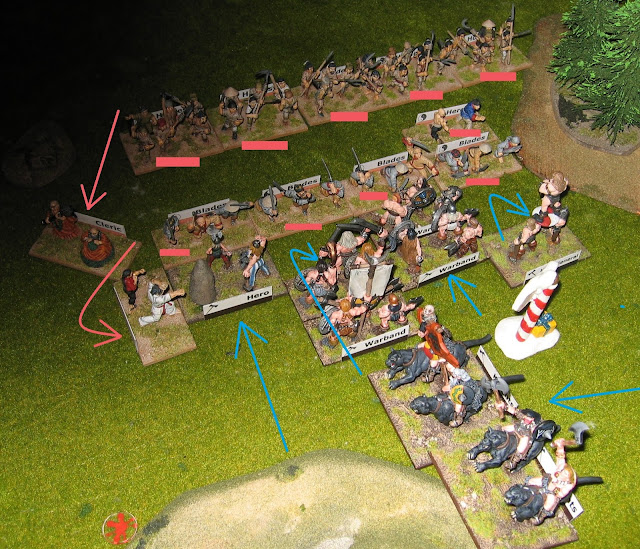 On the other flank, the barbarians surged forwards enthusiastically.  In an unexpected turn of events, their hero general was repulsed; this defeat then affected all the other combats down the line and the barbarians didn't win a single fight. 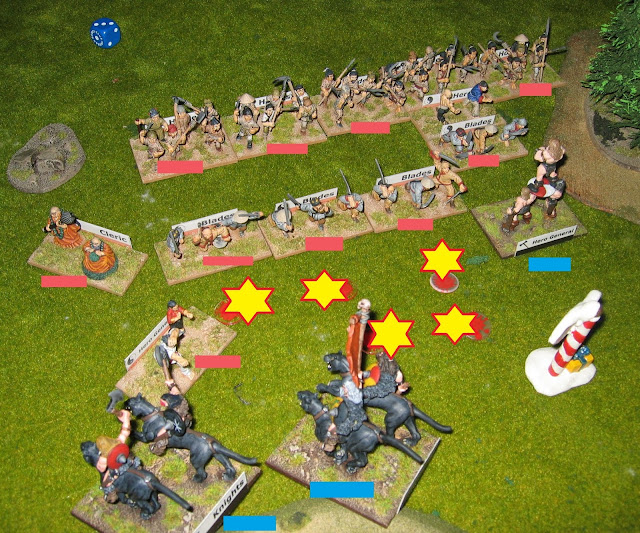 The Kung Fu front line counterattacked and, with a spectacularly bad series of dice rolls, much of the barbarian army just disintegrated. 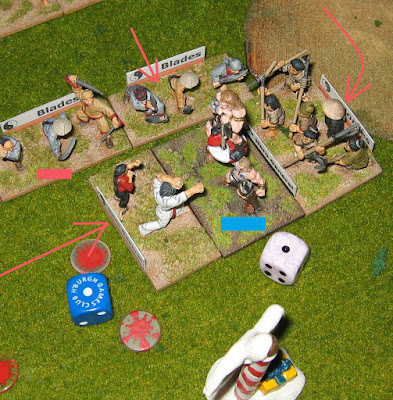 The barbarian commander fought on alone and even managed to slay one of the Kung Fu heroes, but the odds were heavily against him and he was surrounded.  Even though his attackers sportingly gave him a chance by rolling a '1' (!), the dispirited warrior couldn't fight on any more (he rolled a '1' himself.  Again!). 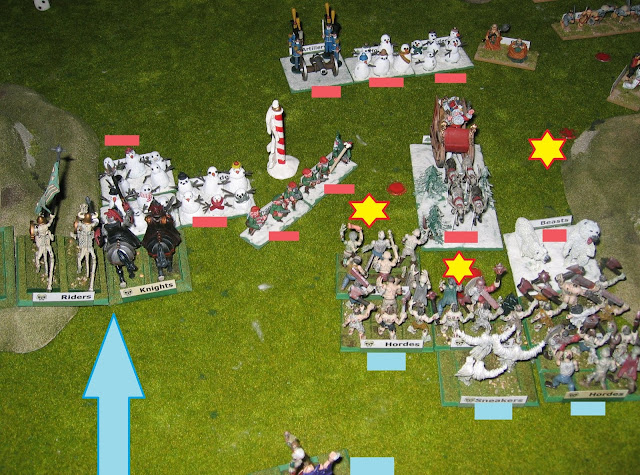 The centre was an almost totally defensive fight for the undead, as they never had enough PiPs to move more than a handful of troops.  Indeed, the giant bats were never activated during the entire game.

The necromancer general stayed at the back, casting ineffectual spells at Santa's army.  In return, the ice bears charged forwards and fought with zombies and skeletons.  There were losses on both sides, but when Santa joined in as well, the tide turned in favour of the forces of good. 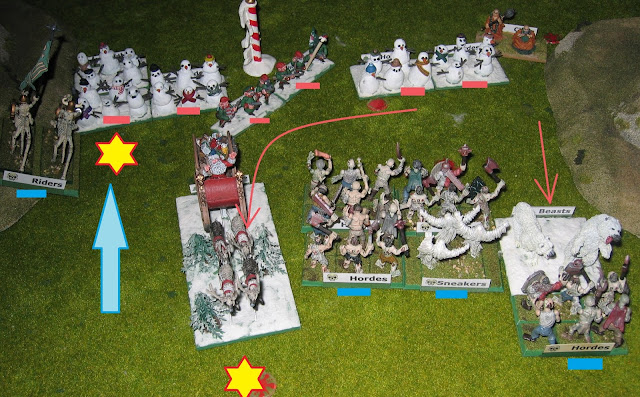 Then, disaster struck the undead!  Firstly, the vampire knights were destroyed in combat with a horde of snowmen.  That's nearly (but not quite) impossible.

Then, Santa saw the necromancer standing alone behind the ranks of skeletal infantry.  A twitch on the reins was all he needed to guide his flying reindeer over the intervening enemies.  The sleigh landed directly on top of the undead general, squashing him into the dirt.

With the loss of their commander, the undead army crumbled to dust (it failed the "panic" roll on the turn after losing the general).  All that was left were a few ghosts (i.e. the sneaker element), drifting about the battlefield looking for something they could haunt. 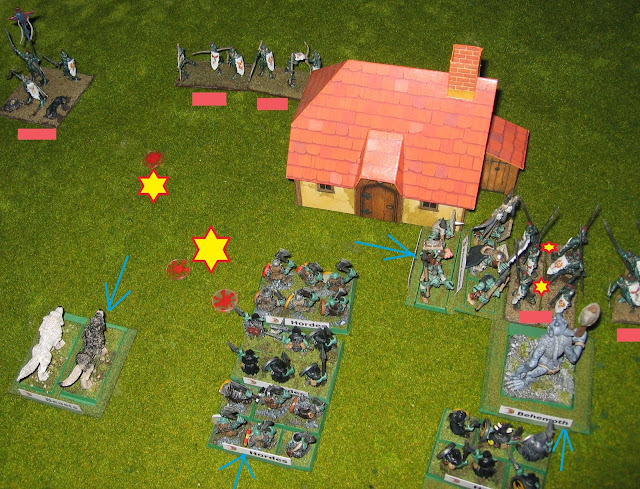 Over near the cottage, the elf bowmen advanced slowly, slaughtering everything that stood in their way (by this time, the Good players were starting to refuse the chocolates they earned for every 'kill'; it was just too much for them).

The elf spearmen moved past the house in an attempt to engage the troll, but were ambushed from the side by the goblin general and his warband.  For many turns, these embattled elves threw the evil forces back (their 'superior' status helped here!), but the goblins just kept on coming until eventually they overran the first group of elven infantry. 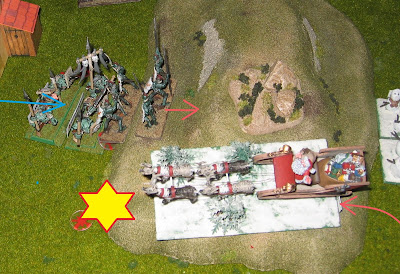 The greater goblins pressed their advantage and pushed the remaining elf spearmen up the hill.  For a brief moment it looked as if the goblin army might be able to inflict some real hurt on the forces of good, but by this time Santa was free from crushing the necromancer.

The sleigh took to the skies once more and came barreling down the hill, into (and through) the troll without even slowing down.  That catastrophic loss was too much to bear and all of the goblin hordes fled the battlefield in terror, leaving just their demoralised general and his bodyguard.  There seemed little point in playing on after this, so we called the game.

That was a rout!  Of the 3 evil sides, only the goblins put up much of a fight. Their opponents (the elves) suffered the heaviest losses of any good army - and even that was only 2 elements.  The barbarians' collapse was unexpected but spectacular; I don't know if I've ever seen so many '1's rolled in a row.  The necromancer's command-heavy army never threw higher than a '3' on a d6 for PiPs (it might have been a '4' on one turn; my memory isn't perfect here) and was consequently paralysed & ineffectual.  It basically stood there and allowed Santa to attack wherever and whenever he desired.

I don't want to take anything away from the good side's victory, though: they played competently and came away with a massive win.  Sometimes what looks like an even fight just isn't.

So, make merry and enjoy yourselves this Christmas, in the knowledge that evil has been roundly defeated once again.  Have another chocolate, if you can face it 🙂...
Posted by Colgar6 at 15:45 7 comments:

I've been a bit quiet on the blogging front recently.  No excuses; I'm just hoping that at least someone noticed.  Anyway, onwards and upwards...

Here's a problem: I have too many models.  That's a bit broad and not something which I either can or wish to tackle all in one go.  Let's narrow it down a bit: I have too many part-completed models - items that I have started to assemble, but which I haven't completed and packed away.  The number of undercoated or part-painted models has risen to the point where they are clogging up my workbench and making it really difficult to make progress on anything much.

This is my answer: the pledge.  I hereby state that I will only permit myself one new model to be taken out of its packaging, assembled &c for every two already-started items which I complete.

Obviously this cannot go on indefinitely as I would eventually run out of already-started models and therefore not allow myself to initiate any further new builds.  Equally, there may come a point where a painting competition, a blog challenge or a special scenario at the games club requires one or more fresh models to be built in a limited time.  My pledge is not to be applied rigidly and may be broken temporarily if such an event should require, but otherwise I do intend to honour it.

I made this commitment about 2 weeks ago.  Since then, I believe that I have completed 19 models and started 1.  By my own rules, I am therefore allowed to start another 8.5 figures whenever I wish.  It's nice to be in credit already!

Here are some of the recently-finished models, just to show that I'm not cheating 🙂: