I'm trying to get back on track with my twice-weekly postings; it's been slipping down to once per week recently.  Still, I should have enough time tonight to show some more mythological creatures.  They'll fight against (or perhaps ally with) Jason and the Argonauts, whenever I get round to staging such battles.

I'm wavering between using Song of Blades and Heroes or 7th Voyage as the rules for my mythological games.  I have both rulesets already and have used SoBH very happily for both my Witch Hunter and Robin Hood settings.  Although I still haven't decided for sure, I might give 7th Voyage a go this time.  After all, it's specially designed for exactly this type of game!

Satyrs are often represented these days as half-man, half goat, though that's more accurately the appearance of the Roman faun.  Still, only a few people would recognise the traditional  horse-tailed Greek version, so I'm happy enough to use these models instead as Greek creatures.

In ancient mythology, the Satyrs have a deep connection with nature.  For the most part, they're the original party animals: carefree, drinking heavily and chasing women!  However, if they feel threatened or get too drunk then they can become wild and really mean.

My figures come from a Fae starter pack for the Fanticide game, though I believe that the models originate from  Eureka Miniatures of Australia.  They're all painted straight out of the packet, apart from Hylaeos, the leader.

As supplied, the head for this model had large, branched antlers on his head.  I didn't like this for 2 reasons:
So, I removed the antlers and replaced them with some curled horns from an old Games Workshop skeleton set.  This guy is clearly the boss: he's got bigger horns and a bigger spear than any of the other satyrs!

There are 10 fauns with spears in the warband; 2 models each of 5 different poses.  I've used a variety of shades of brown and grey on the goat legs of these figures; there's very little else to differentiate them.

As with many of my figures these days, I've given them appropriate names.  Note that these models are very straightforward to paint; they have very little equipment and so it's just flesh, faces, hair and hooves!

The other 8 members in the warband have bows, although 2 of them seem to have picked up rocks to throw.  This might be because they've run out of arrows; their quivers are empty! 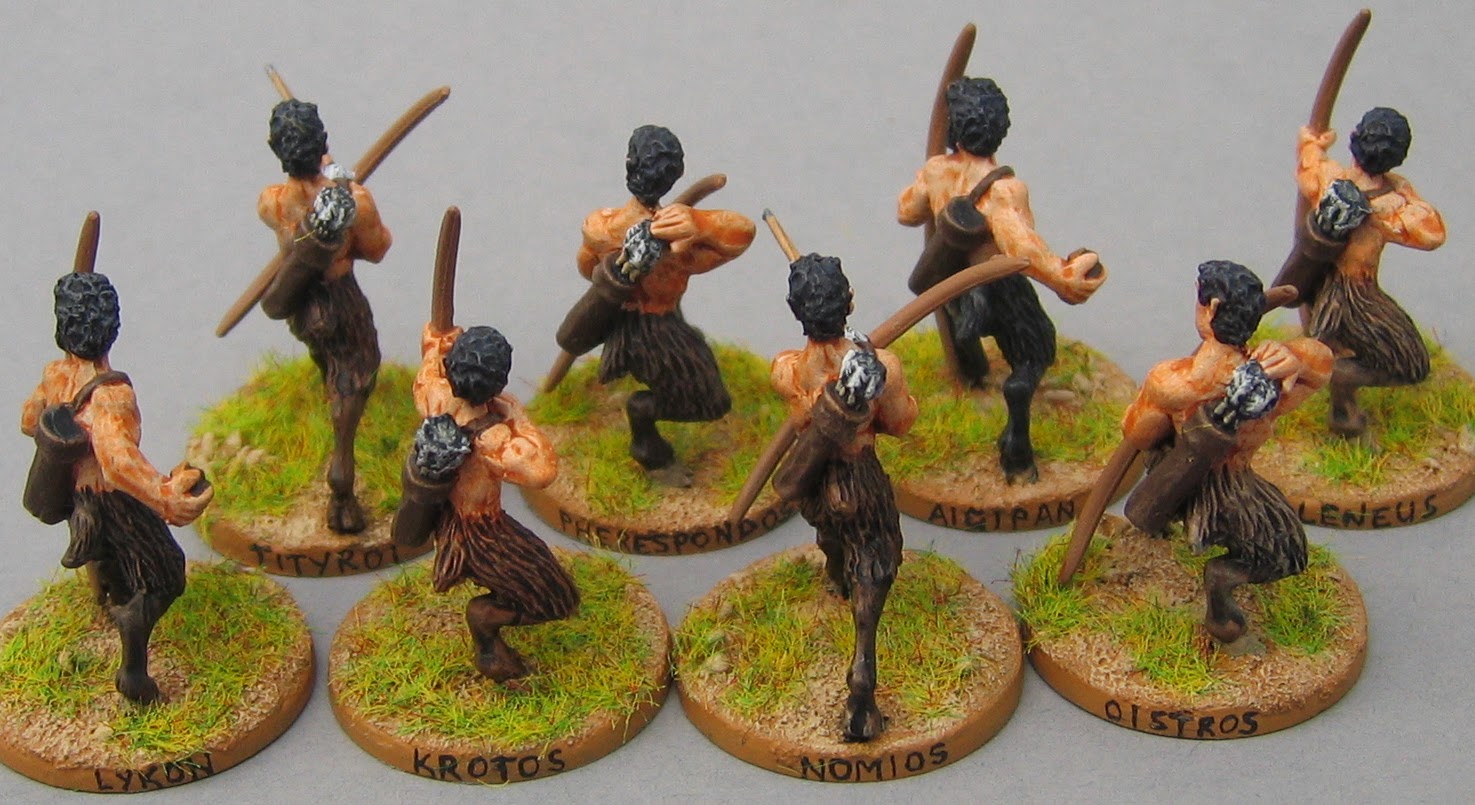 Once again, there are 4 distinct sculpts, with 2 copies of each pattern in this group.  The extra equipment means that they took slightly longer to paint than the fauns with spears, but even so these are very straightforward models.

So, now I really have little excuse for not planning at least one game that involves Jason and the Argonauts.  I can see a scenario where the satyrs defend themselves fiercely against an accidental intrusion by the band of human adventurers.  I've also noticed that my Harryhausen-inspired giant cyclops model has some of the goat-like appearance of these guys, so perhaps he might even ally with them.  It's untraditional, but it might just work...

Next in this series inspired by Greek myth will be...harpies!