Battle Report: The Flames of Justice!

Last year, I reported on a game of Song of Blades and Heroes that was fought between my Witch Hunters and their deadly opponents, the Witches' coven.  This year, I intended to fight another such game on or near to Halloween.  Well, things didn't quite work out that way (especially with my wife's current eye problem).  We did manage to play the game, but it was a week late.  I'm now reporting it over a week after it was played, so this is at least a fortnight after I would have liked.  Still, better late than never, right?

One of the 3 witches in the coven has been captured by the forces of law and order.  She will be burnt to death at the stake - unless her sisters can rescue her, of course! 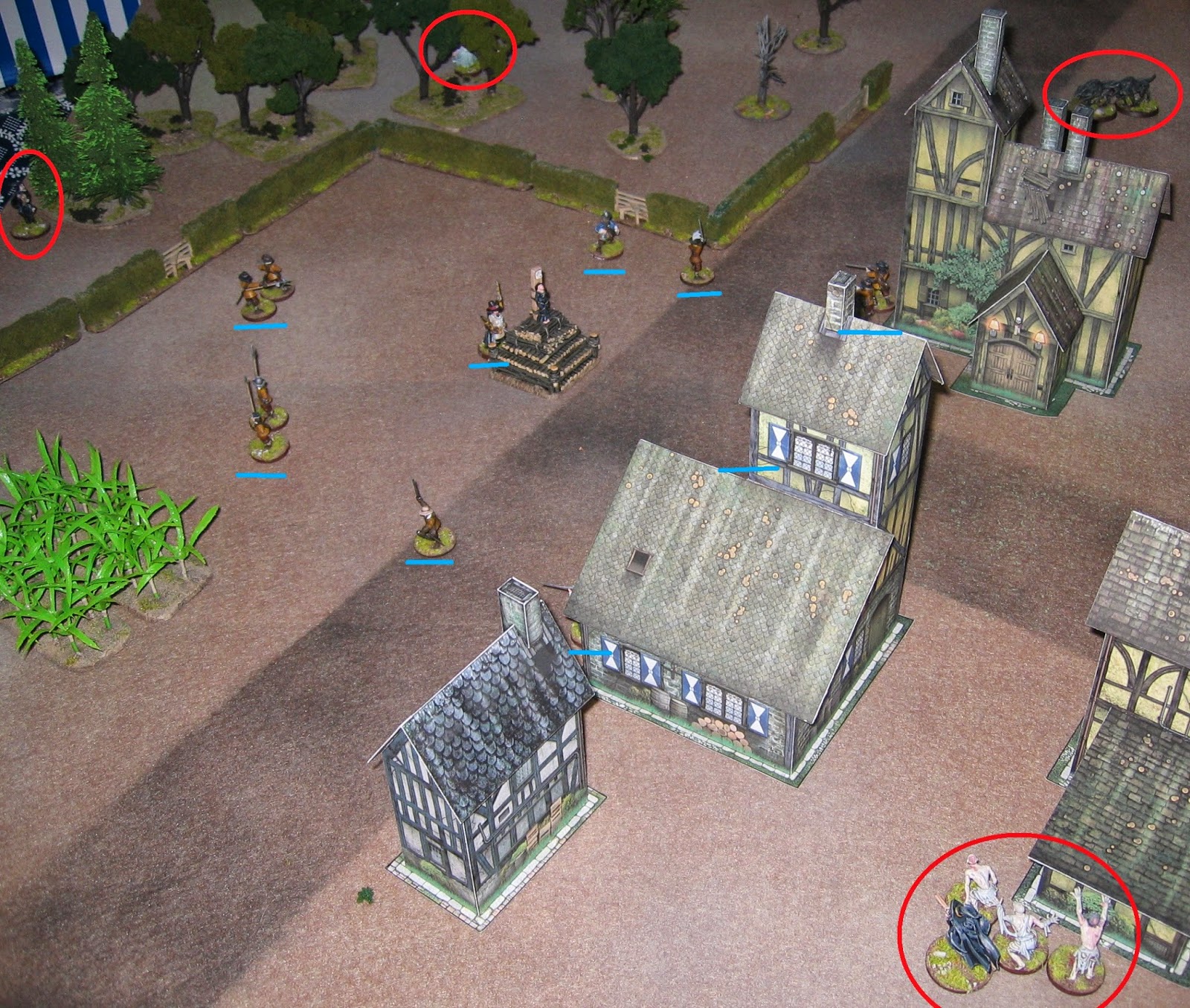 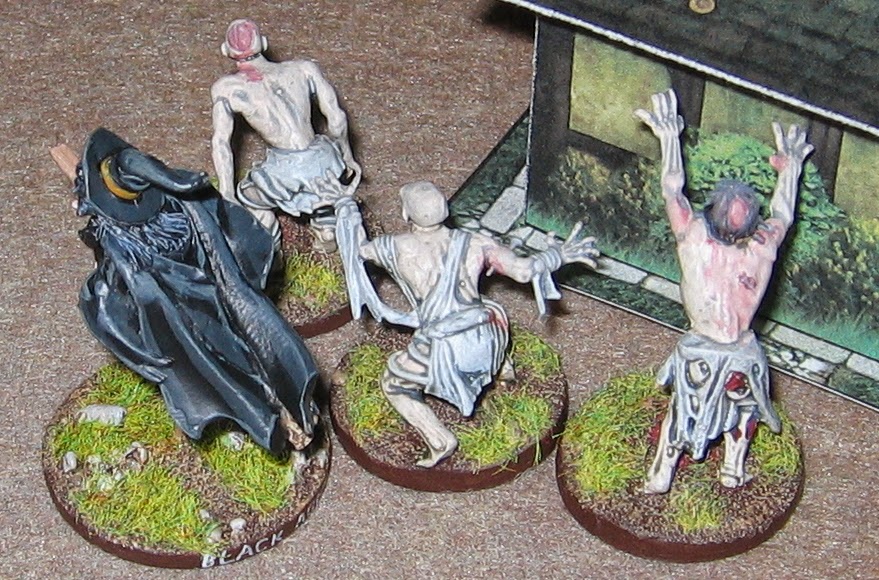 In our game, I played the witches and my sons commanded the witch-hunters.  I spread my forces so as to approach from all sides (possibly a mistake?).  Black Agnes and 3 ghouls would creep down an alley on the southern edge of the town.  2 hell-hounds would approach along the road to the north-east, whilst Agatha flew over the wall to the north west.  My band was completed by a ghost which roamed the woods to the north; hopefully it would terrify the soldiers near the pyre and allow one of the witches to get close enough to release the chained Meg. 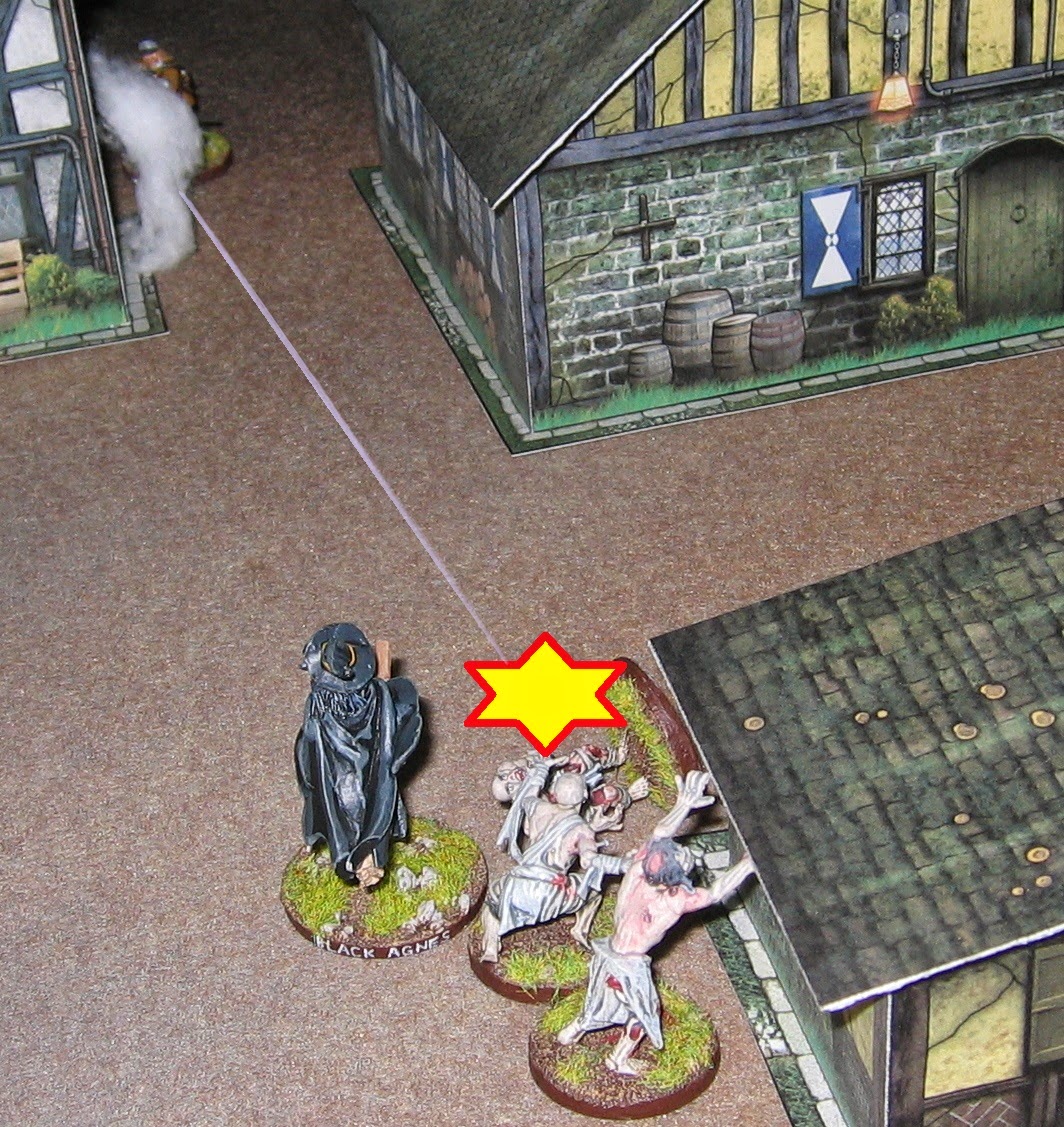 Things don't always go to plan, sadly.  For 2 complete rounds, I threw nothing but '1's for activation, which meant that the witches and their allies stood frozen to the spot in a mire of uncertainty.  During that time, one of the musketeers on sentry duty happened to look down the alley.  Seeing shadows at the far end, he called out "Halt!  Who goes there?  Identify yourselves!".  Not receiving a satisfactory answer, this likely lad then opened fire.  The musket ball hit one of the ghouls and knocked the evil creature to the ground. 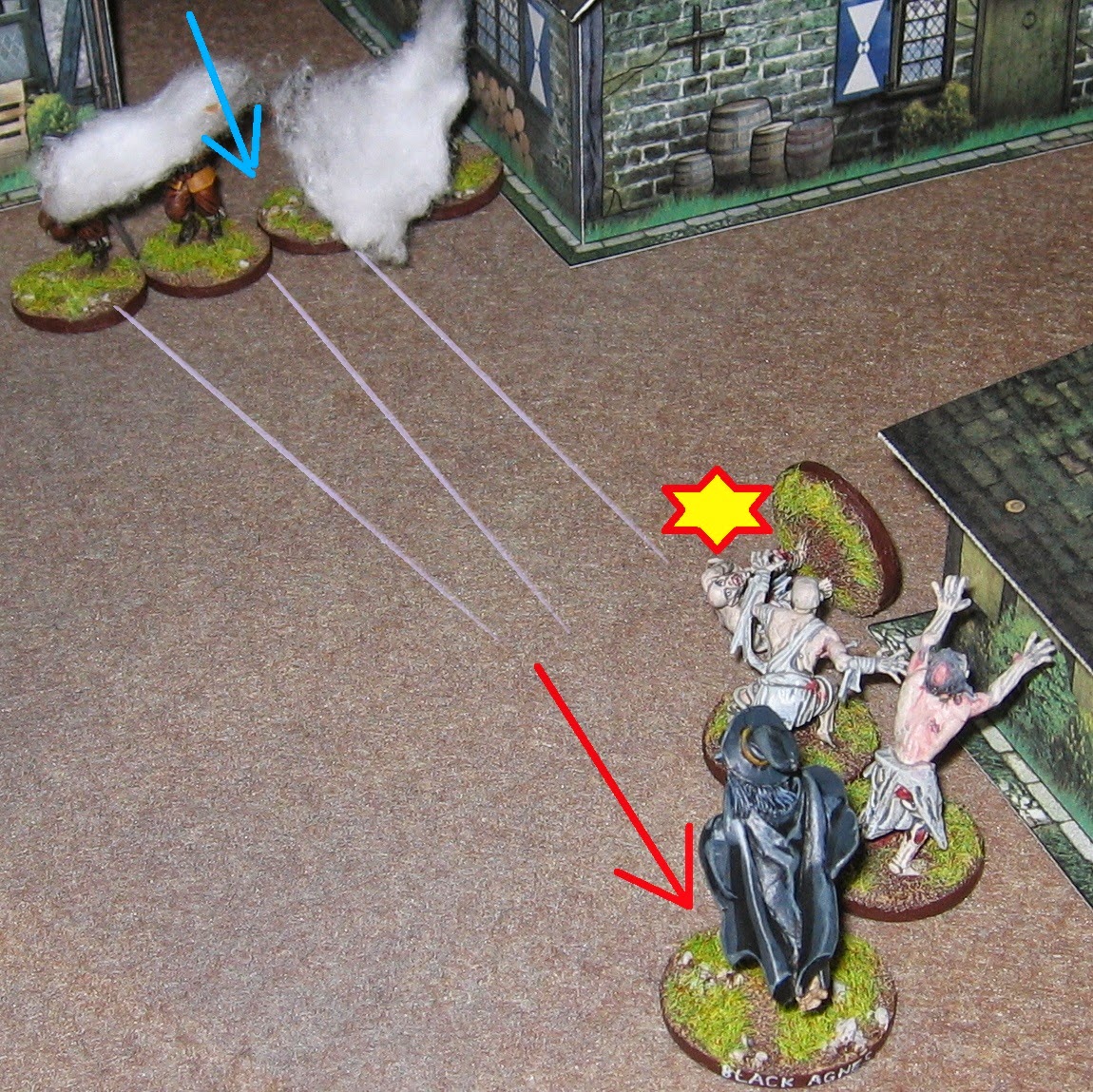 The local magistrate was just around the corner.  He reacted instantly to the gunshot by calling on several nearby musketeers to form a firing line and move forwards ("First rank, fire!  Reload!  Second rank, advance and present!  Fire! ...").  Black Agnes and the ghouls fell back in disarray before the ferocity of this attack, completely unable to advance. 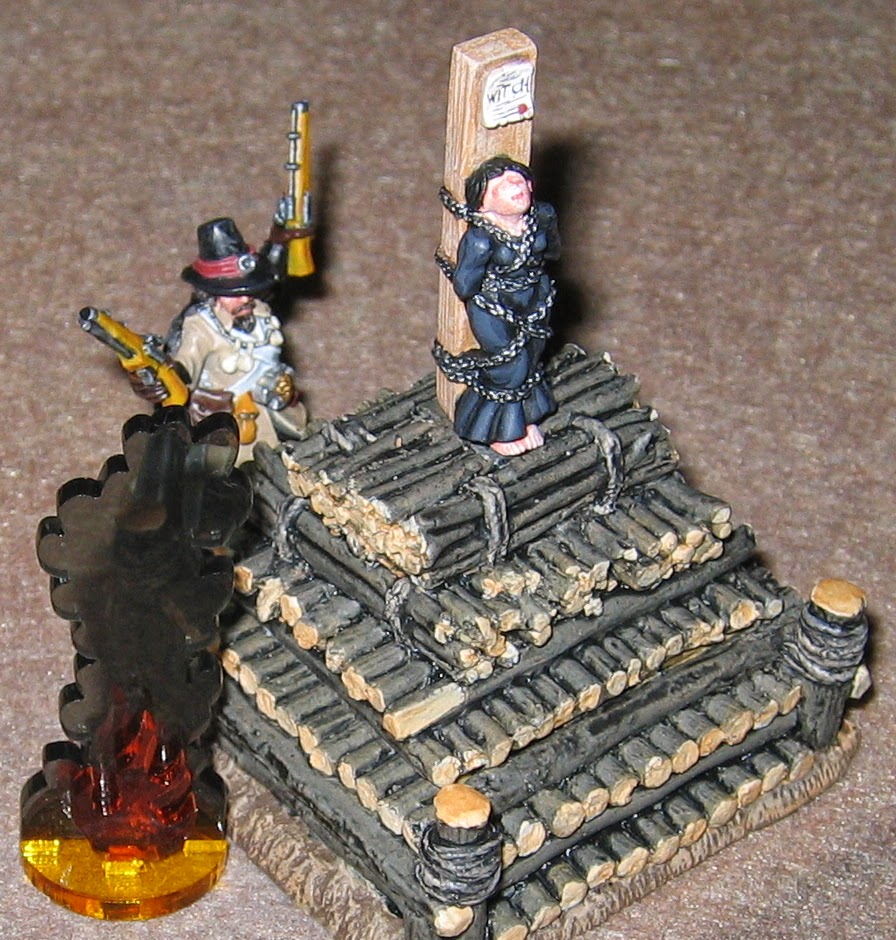 Hearing the commotion, the witchfinder-general applied flint to steel and tried to light the pyre.  Even though he fumbled his first attempt, he was successful at the second try - and still the witches' warband hadn't made a single successful activation roll.  This was not working the way I had hoped! 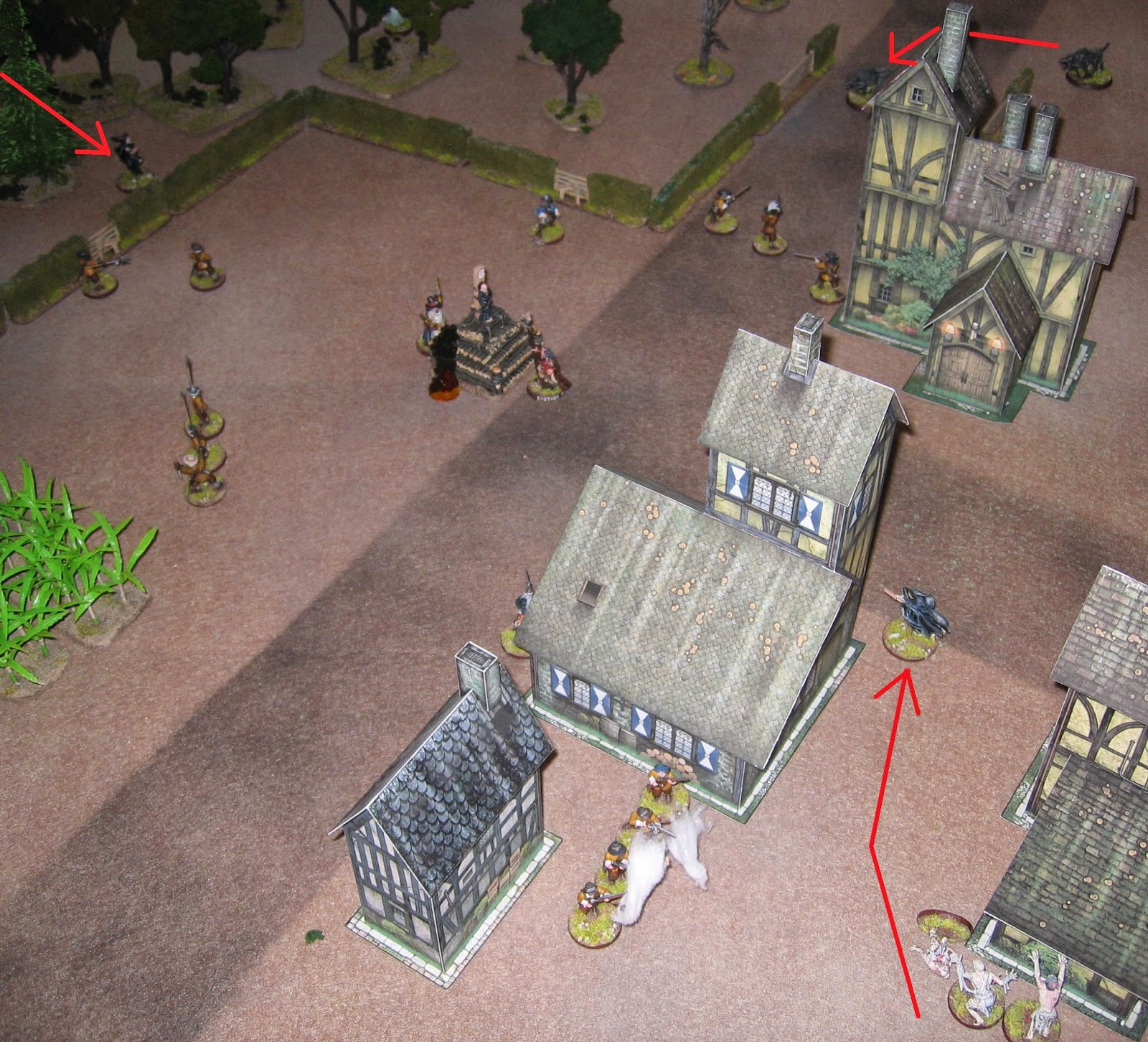 Finally, the witches had some successes, albeit minor.  Black Agnes abandoned her ghoul pack and flew away from the line of musketeers.  Opposite her, Agatha approached the hedge, wondering whether to fly over it and attempt a rescue on her own - but there were soldiers everywhere!  To the north, one of the hell-hounds wandered along the road slowly.  Although this caused consternation amongst the nearest musketeers, the animal seemed to be in no great hurry.  Meanwhile, the ghost continued to haunt the same spot as before, moaning quietly without moving. 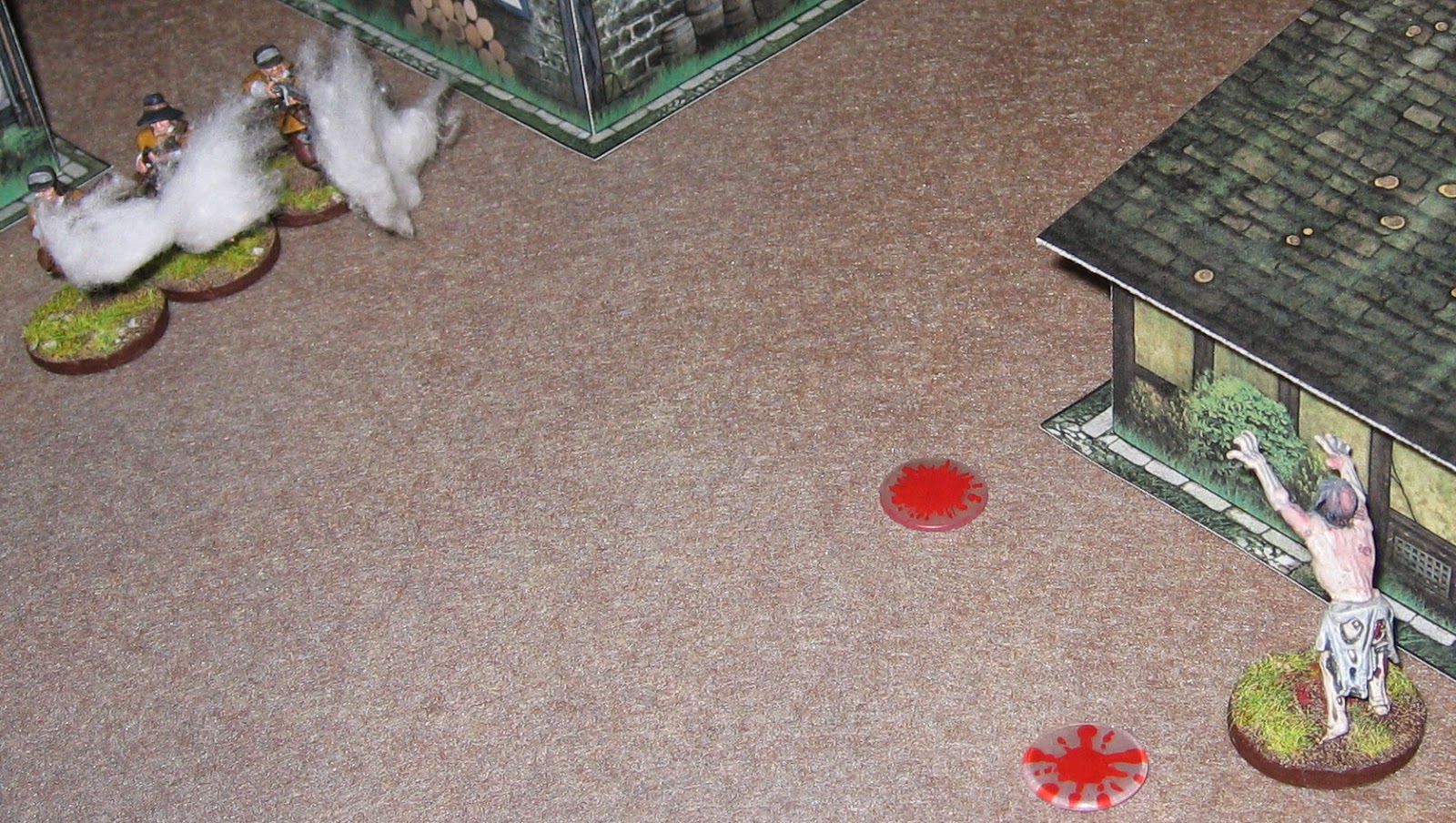 Back in the alley, the firing line of musketeers continued to gun down the ghouls enthusiastically.  As far as I was concerned, this was now a sideshow; the ghouls were as good as dead already and I had no intention of wasting any activation rolls on them! 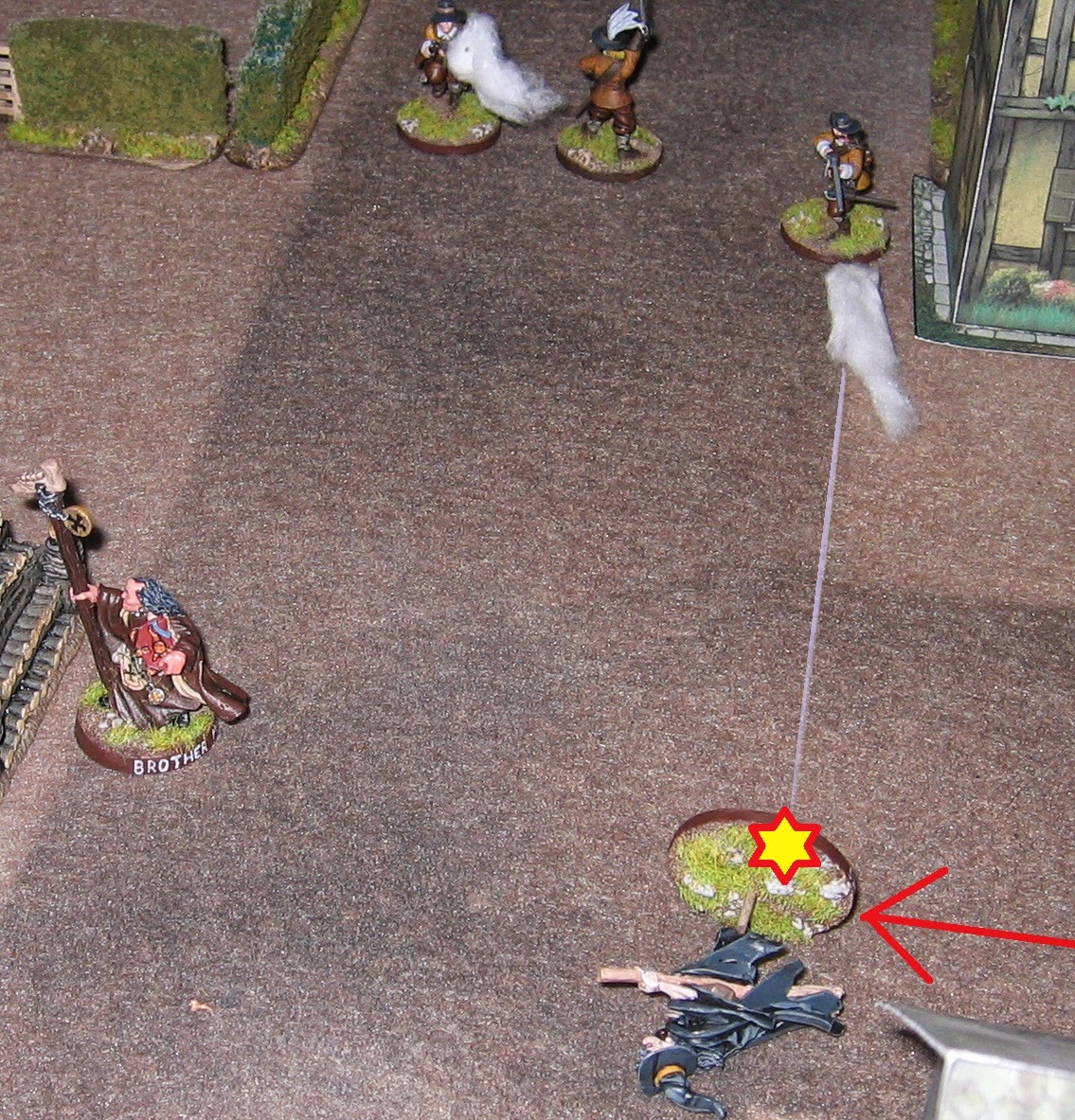 In desperation, Black Agnes flew forwards towards the pyre.  She had barely cleared the building when she was spotted; a musketeer turned round from facing the approaching hell-hound and fired hurriedly at her.  The shot hit her broomstick and as it staggered in mid flight the witch clipped the ground and fell off [Darn it!  These musketeers are just too flipping lucky today!] 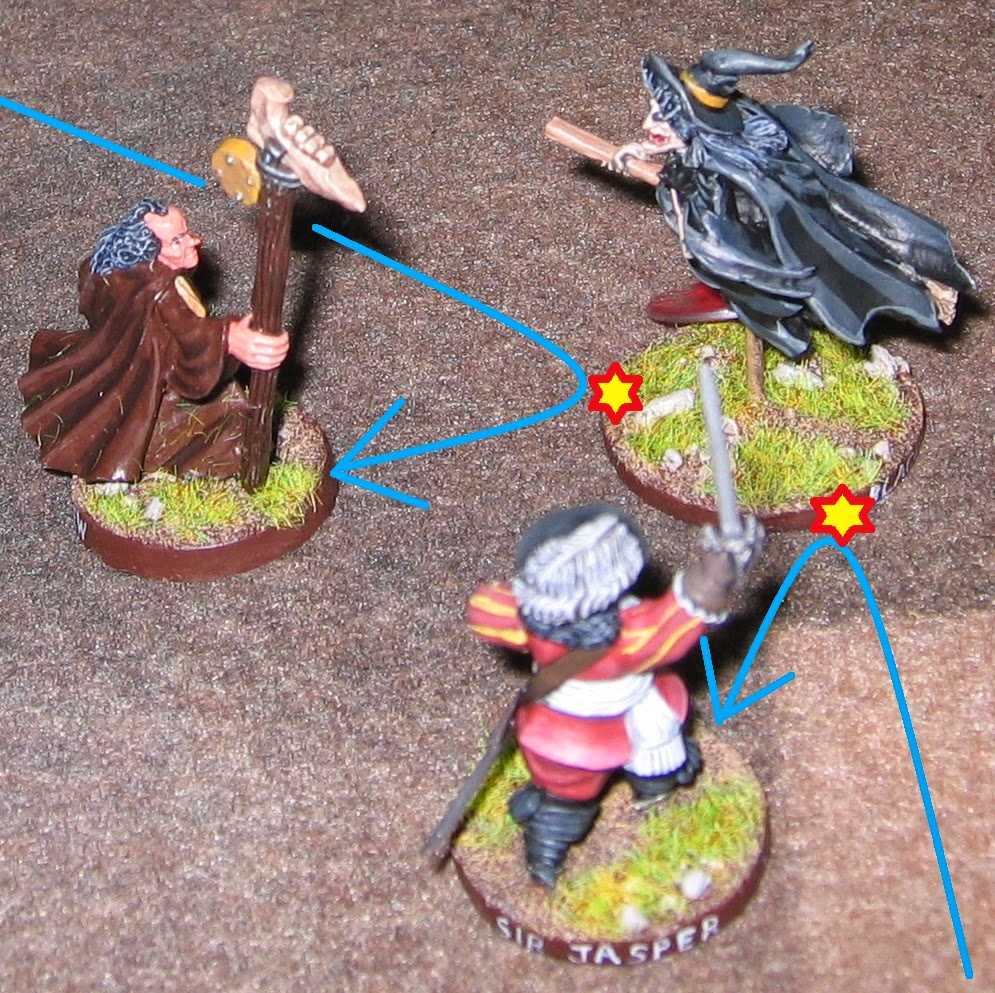 Seeing the witch prone in the dirt, first Brother Matthew (the mad monk) and then Sir Jasper (the magistrate) charged up and tried to finish her off.  In desperation, she somehow fought them both off and even managed to regain her feet... 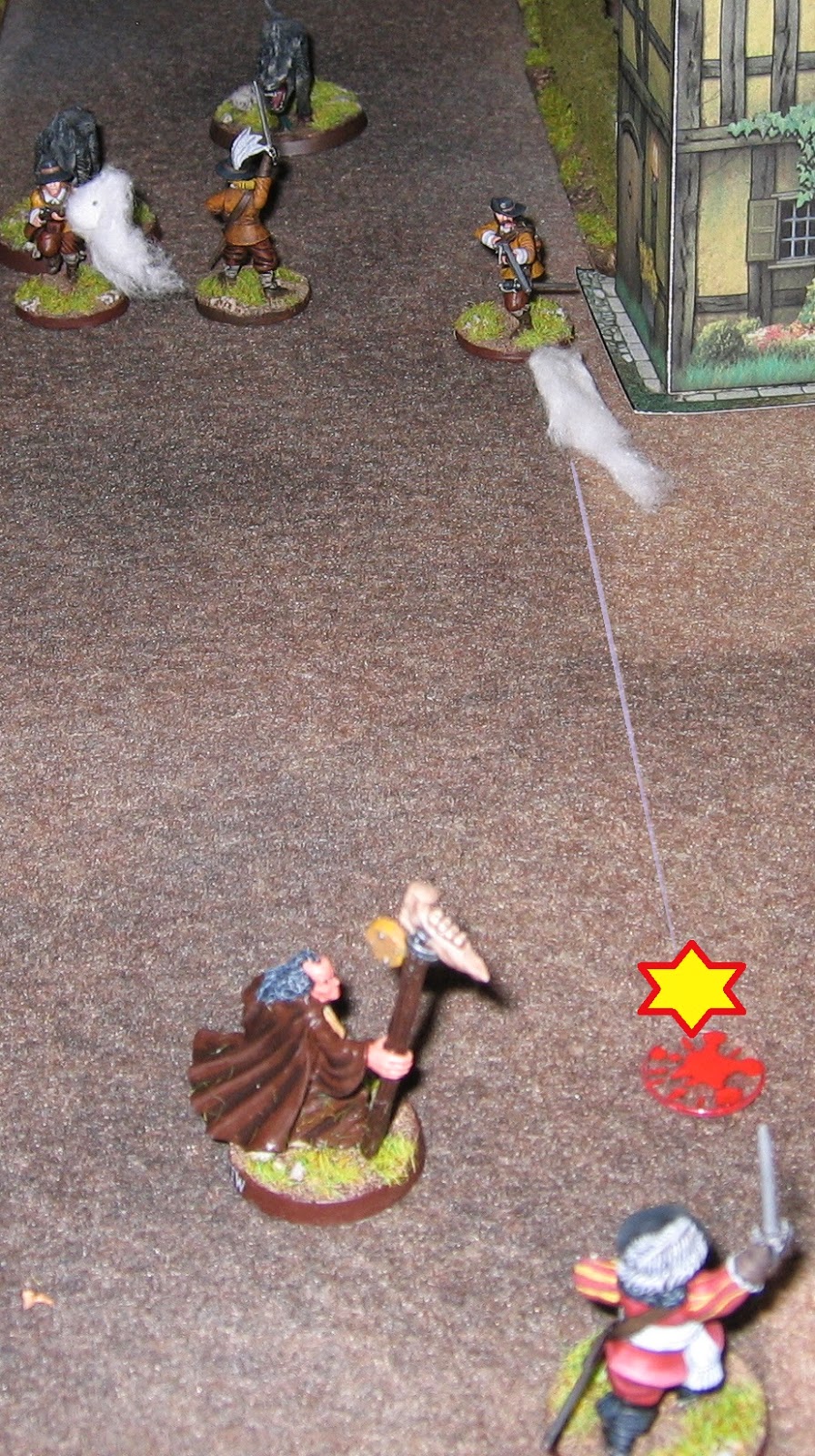 ...only for the musketeer to reload, take careful aim and shoot her in the back! 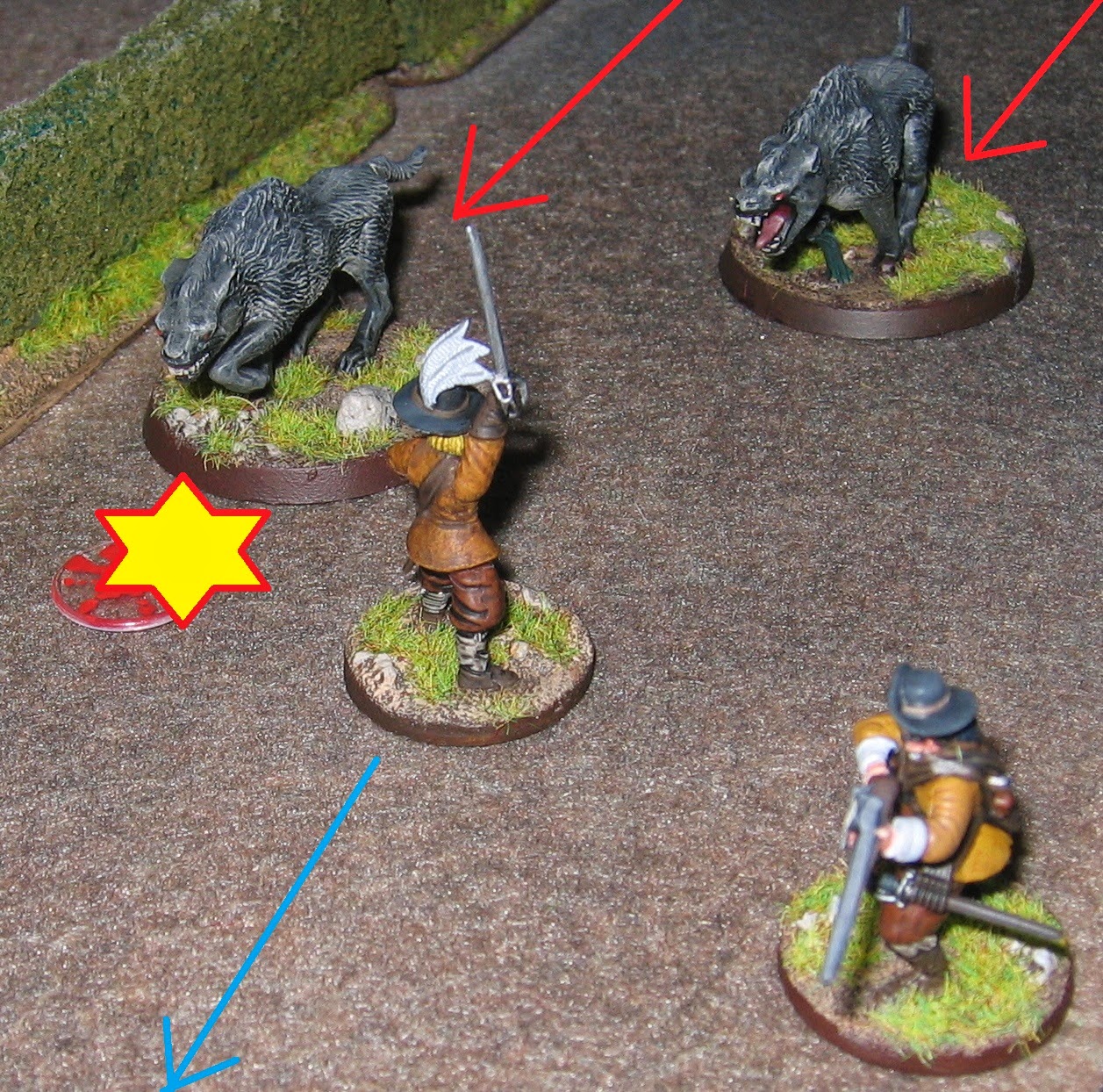 In revenge, the hell-hounds sauntered up the lane and tore apart one of the musketeers.  The nearest soldier ran for his life, which was probably the smartest thing he could do when faced with the 2 huge, vicious animals.

The second musketeer, whose shot had killed the witch, was so elated with his success that he never even looked over his shoulder.  Presumably he thought that the hot breath and low rumbling sound was one of his friends coming over to congratulate him?  Anyway, he barely felt a thing as his head was ripped off - and at least there were no other soldiers nearby to see this second gruesome death! 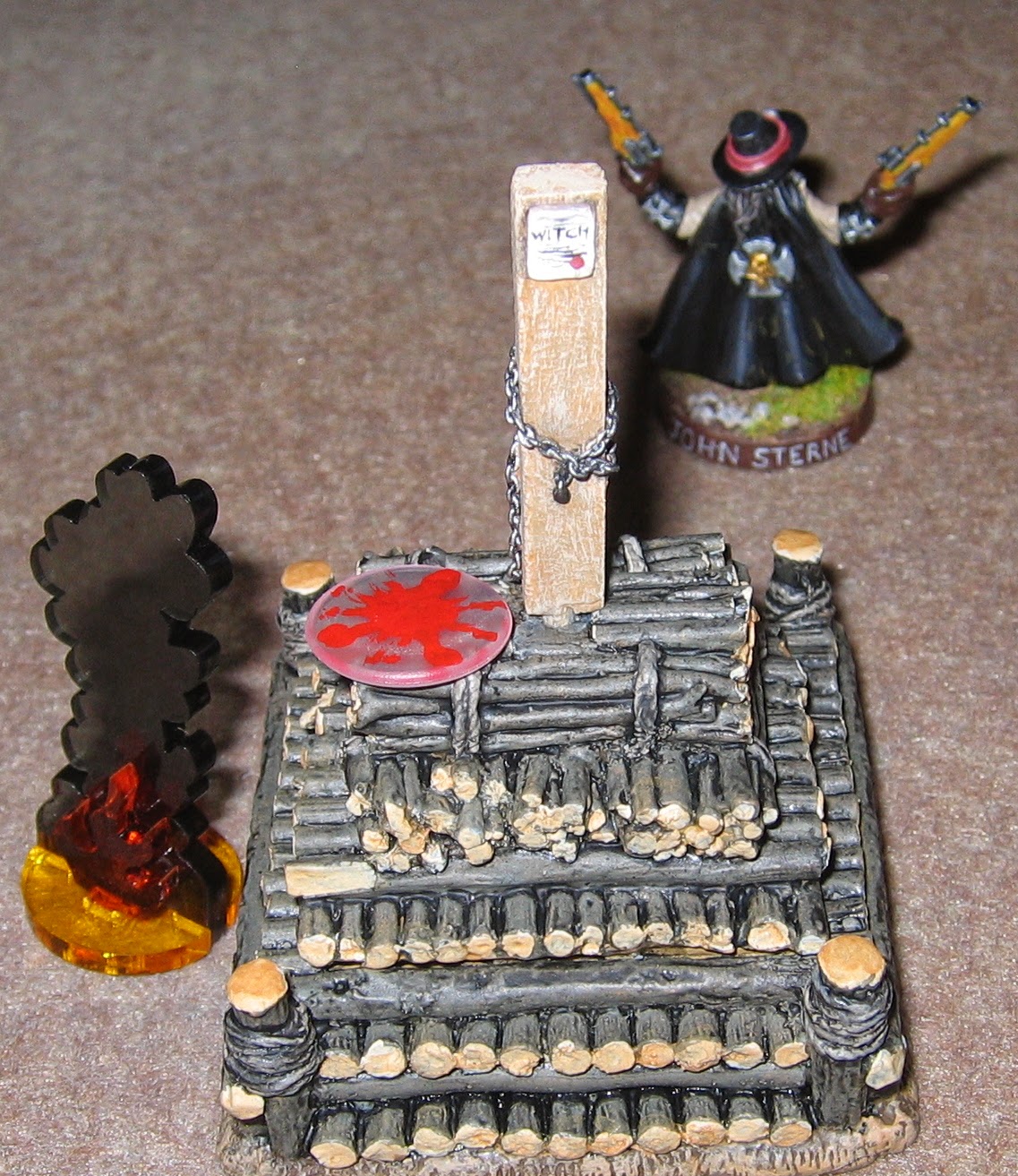 Meanwhile, back at the pyre, the fire burnt sullenly, resisting all attempts to spread it further.  Despite the general lack of flames, the captive Meg was surrounded by thick smoke and started to choke.  Within a couple of turns, she succumbed and fell away, lifeless [how unlucky was that!  The witch was C2, the fire was only C1 at this stage and she needed to be doubled to perish.  Predictably, I threw the necessary '1' (for a total combat score of 3) at the same time that the opposition threw a '5' or a '6' (for a total of 6 or 7 - I forget which)]. 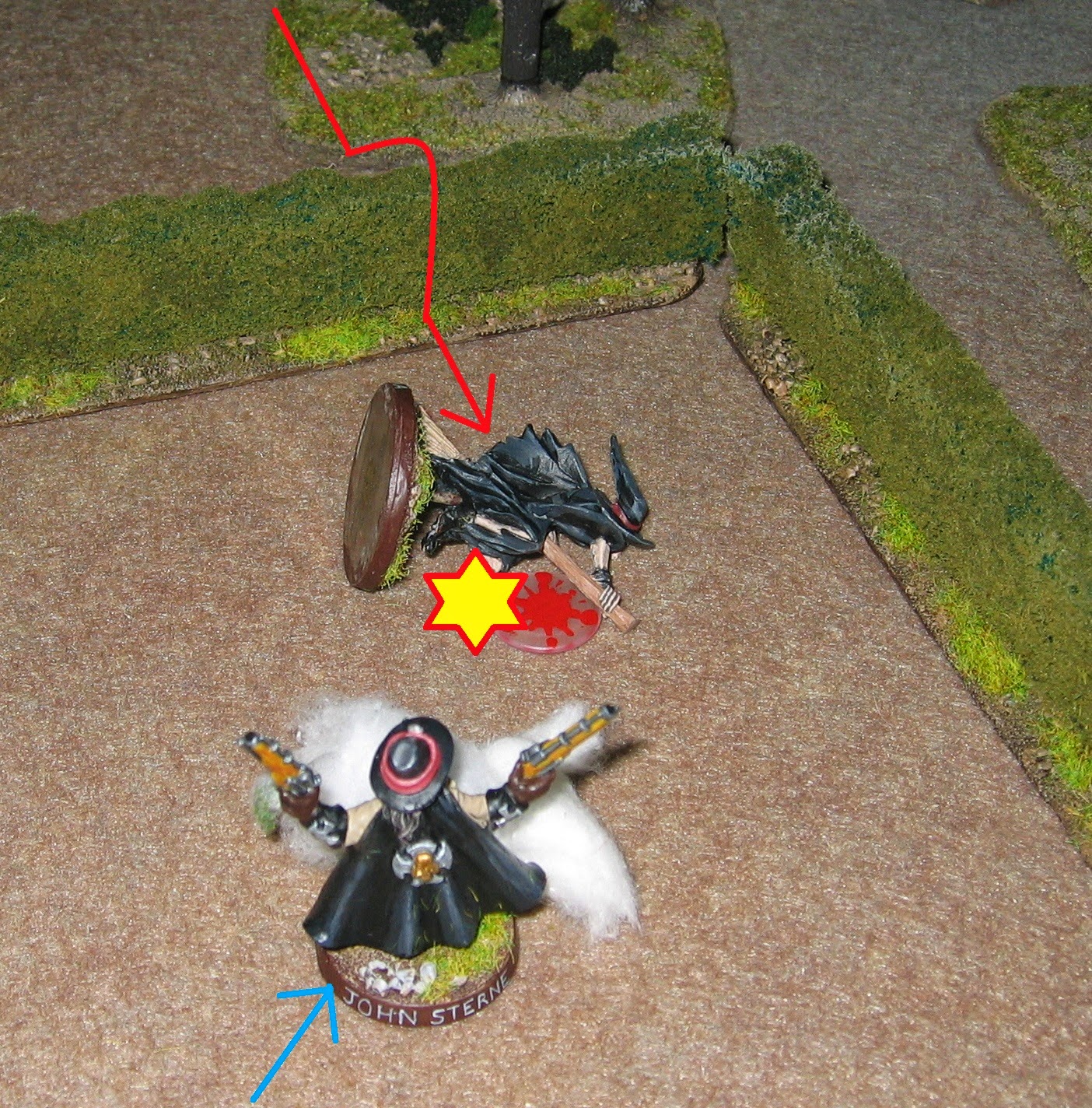 In a truly suicidal attempt at revenge, Agatha flew over the hedge to the north of the pyre.  She had barely landed her broomstick when the witchfinder-general strode up to he and fired both pistols at short range.  The poor old woman didn't have a chance and was killed on the spot! 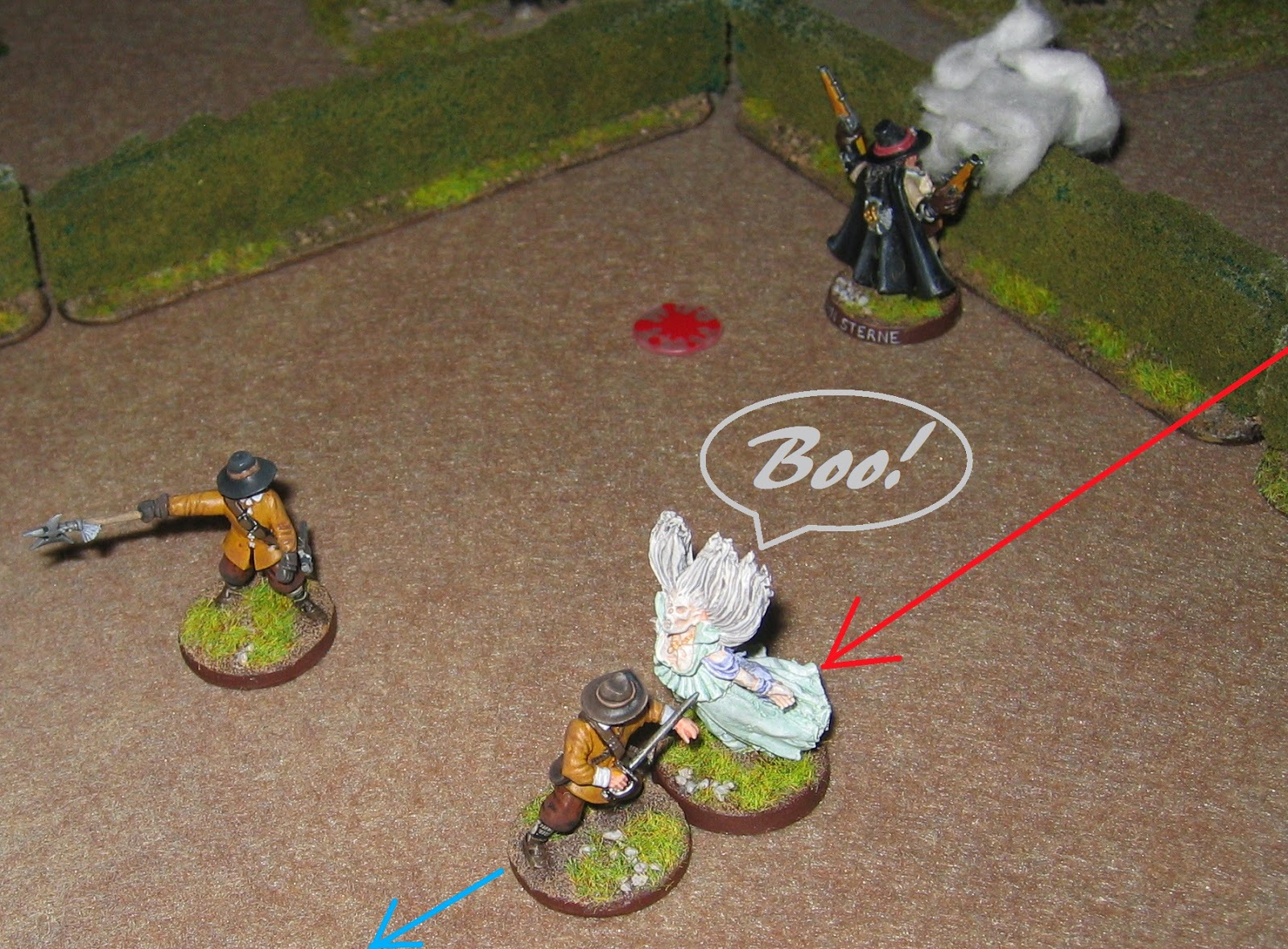 This just left the ghost and the 2 hell-hounds.  The ghost finally looked up from its misery and decided to act [I think I'd failed every single activation attempt for this model up to that point in the game!].  It dodged the witchfinder-general and charged at one of the soldiers.  The poor lad cried out "Mummy!", turned and fled - never to be seen again. 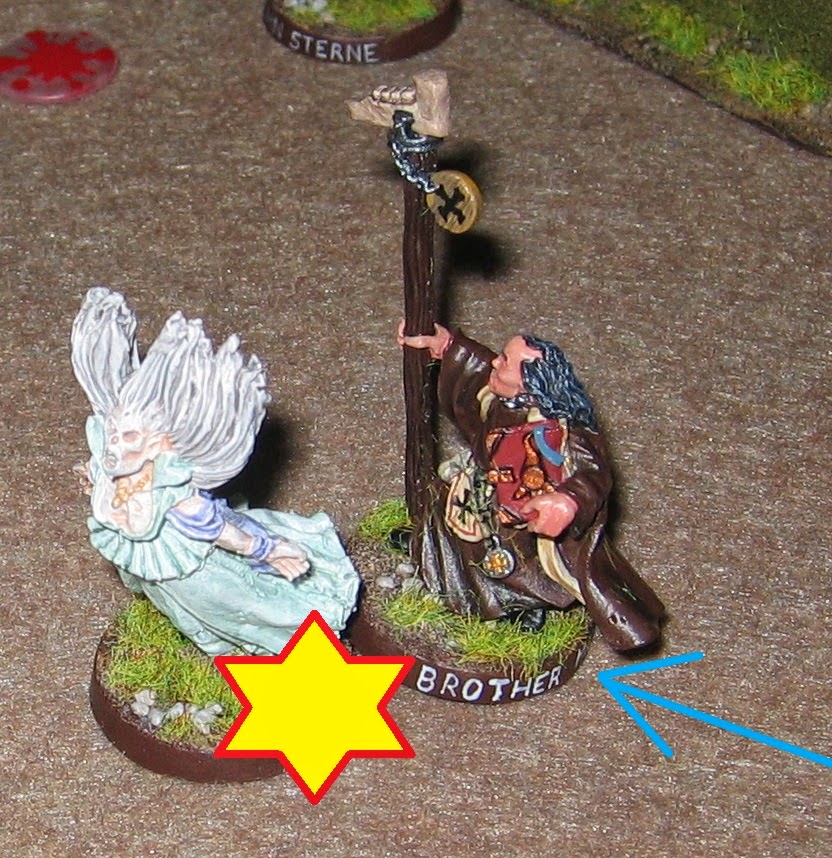 Before the ghost could repeat this success, however, Brother Matthew came rushing towards it.  This was bread-and-butter to him [he ain't afraid of no ghost!] and the poor spirit was summarily banished from the world. 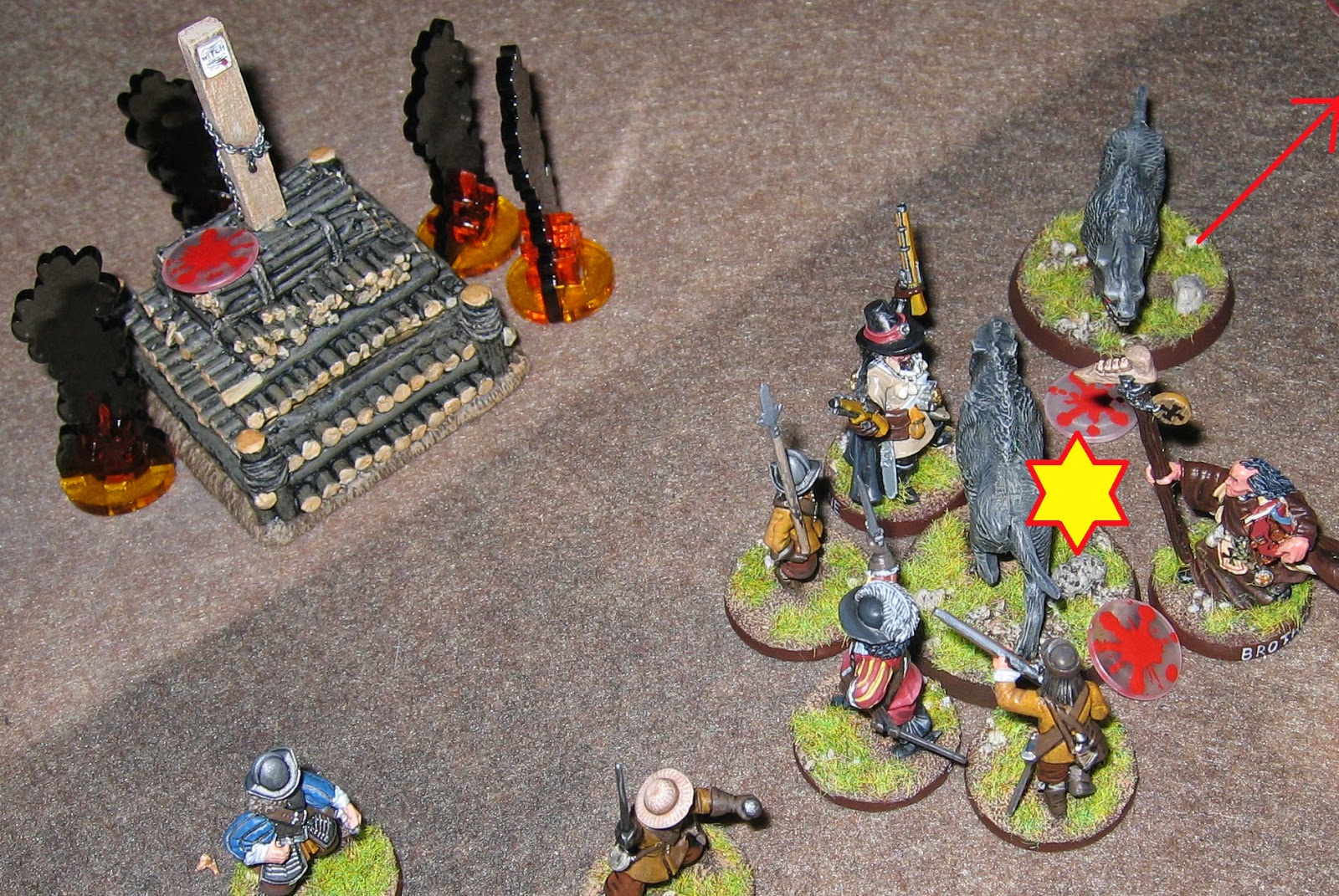 By rights, the hell-hounds should have fled at this point because they are animals and the last non-animal member of their warband had perished.  However we didn't remember this at the time and played on.
The continued play didn't really change the result in any way, though: the first hell-hound was surrounded and it was then only a matter of time before the beast perished.  Although it took a couple of soldiers with it, eventually Brother Matthew delivered the coup-de-grace with his jawbone-of-ox-on-a-stick.  I called it a day and the second hell-hound slunk off, the only survivor of a truly doomed rescue attempt!

What a disaster for the witches (but oh, were my sons chortling with glee at having beaten their dad)!  In hindsight, I think there were several issues that really messed up my day: