It's been a few days since my last post.  I had intended to show some figures in the middle of last week and had even got as far as taking photographs of them.  However, when I looked at the pictures on the computer they were not very good, having been taken at night under artificial light.  At this time of year, the only time I see natural daylight at home is over the weekend; during the rest of the week it's dark both when I leave for work and when I return.

Today I've re-photographed the same models, but this time under natural light.  So, later than I had intended, here are some more legendary Greeks...

The ancient Greeks were not well known for their equal opportunities for both sexes.  With very few exceptions, women in both the myth and reality of classical Greece were either sorceresses, wives & mothers or damsels in need of rescue.  Just about the only one I can think of who didn't fit this pattern was Atalanta, who was an accomplished huntress (not a warrior, mind) - and even she was resented by some of the male hunters!

However, when I saw this model from North Star, I knew that I had to have it.  Of course, it helped that the model was on sale at the time!  I've named this adventuress "Antigone" after a respectable young woman from Greek myth who stood up to her uncle Creon (though she died horribly as a consequence).  In my alternate world, she's a seeker after truth and justice who has decided to take up arms against tyranny by joining the Argonauts.

I'm somewhat tempted to buy another of these figures to convert into an enchantress such as Circe, Medea or Pasiphae.  The shield is a separate part, so that wouldn't be a problem.  I'd need to convert the spear into a staff or wand, but that should be simple enough.  The big part of such a conversion would be to remove the helmet and rebuild the hair.  Hmm.

I realised some time ago that my Argonauts needed a mixture of troop types.  I already had some heavily-armoured hoplites, but was missing any light troops - javelinmen, slingers or archers.  To fill this gap, I recently purchased a box of Wargames Factory's Numidians; despite the name on the kit, these models are a good basis for pretty much any Mediterranean light troops from the classical period.

My first 4 javelinmen are here; they may not be capable of killing many monsters themselves but should be able to distract and harry them.  Or maybe they'll just sit on the sidelines and act as cheerleaders for the real heroes!

I have plans to build a number of different figures from this box of Numidians.  As well as skirmishers for the Argonauts, I'll make some with helmet and shield to act as another human force, either to oppose the Argonauts or as neutrals.  So many possibilities... 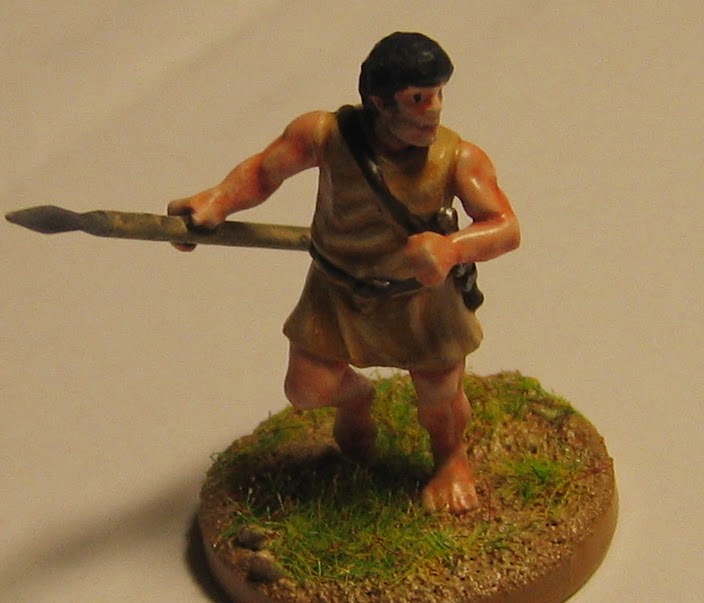 Finally, here is one of the less-than-perfect, mid-week photos that was taken under artificial light.  'Nuff said!

I've got a bunch more of these Greeks on the painting table, but they're not ready to show yet.  Additionally, I'm making a determined effort to tackle some of the long-standing, part-complete models that clutter up my workbench.  It would be nice to finish off some of these and release that space; you may see some of these models in future posts.

Oh, yesterday, my sons and I played a large game of All Things Zombie.  Expect a report on this sometime soon!