It's been a long while since I posted anything about my Lost World collection.  It's a genre which hasn't had much coverage on my blog.  Indeed, it's been 2 1/2 years since I wrote about the large beasties (megafauna).  That doesn't mean that I've given up on it, though.

A couple of recent events have reawakened my interest in the Lost World setting.  Firstly, Steve Barber Models has announced a reworking of the old Prehistoric Settlement game; there will be a nice range of cavemen and Ice Age beasties to support this.  Secondly, the well-known figure sculptor Steve Saleh has created the Lucid Eye range of figures, currently available from Arcane Scenery.  These are specifically aimed at Lost World/Hollow Earth scenarios and the range already has such curios as Atlanteans, Neanderthals and Amazons.  However, the figures that immediately caught my eye were the simians.

I've been looking for figures that I could use as early hominids for almost as long as I've been collecting prehistoric figures.  They have to be more than apes, but not as advanced as (or recognisable as) early humans.  As soon as I saw the Lucid Eye simians, I knew that they would do nicely!  They might or might not be based more on fiction than on palaeontology (I'm not an expert on this), but for my purposes that doesn't matter at all.

There are 2 packs of simian figures in the range at the moment.  Firstly we have a set of 4 ape men in assorted poses.  They all have weapons; 2 of them have well-made flint spears whilst the other pair have a tree branch and a large bone.  Are they intelligent and skilled enough to have created the spears themselves?  Or did they pinch them from some nearby humans?  I'm not sure and I think I would have preferred less advanced tools - perhaps a simple sharpened stick or a handy-sized rock instead.  Oddly, it only occurred to me after painting these models that I could have converted them very easily.  D'oh!

The SCT32 pack of 4 simians is currently retailing for £7.49, plus postage of course.

Next, we have the alpha simian.  He's much the same size as the other creatures, but has perhaps a more thoughtful (yet still challenging) stare rather than the raw aggression of the other members of the tribe.  Alpha also has a flint spear, though again it would have been very easy to replace it with a tree branch or some other type of tool.

SCT31 Alpha Simian costs £2.99, thus making him almost twice as expensive (ape for ape) as any of the grunts (and I use that term intentionally!). 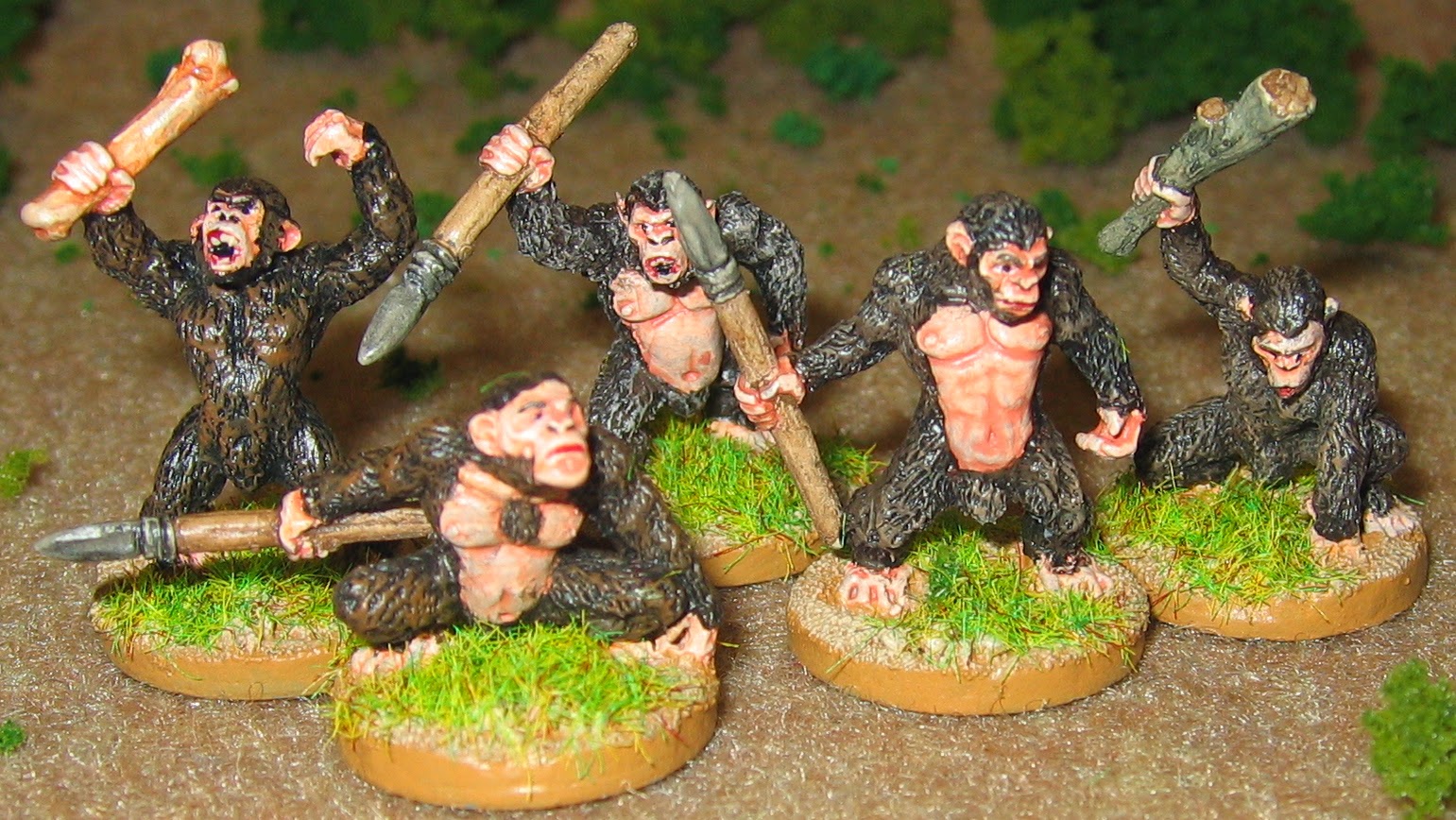 Here's the entire tribe, all together.  It would be very nice if another set or two of simians were to be produced (perhaps some females or adolescents?), but this isn't really necessary.  I could easily build quite a large troop from the models already available, especially with some conversions of their weapons and some different painting (darker for the leaders, grey for the older hominids, perhaps?)

These hominids are actually quite small models.  I've mounted them on 20mm washers, rather than my normal 25mm bases.  They're definitely not in the "giant killer ape" category (unless used with 15mm figures), but then there are plenty of models of gorillas or yetis to fill that niche already.  No, these will do just fine as early hominids in my games.

I can also see them being used as Tarzan's ape family in a more Victorian setting, or even as hostile natives in a remote part of any Pulp world.  Finally, these models are very reminiscent of the chimps and other simians in the "Rise of the Planet of the Apes" film.  They could easily be used in a modern setting as hyper-intelligent laboratory animals bent on escaping from their slavery - change their flint spears for stolen pool cues or cattle prods.  Now there's an idea for a game!