I missed posting on Sunday last.  I had intended to put something up then, but nothing that I'm working on now was ready,  Partly this is because I've got a nasty cold, but mostly it's the new puppy in the house (collie, 4 months old).  He's really causing havoc with our normal habits and routines!

I've got a few moments tonight, so here's a short update...

One of the nice things about the Frostgrave game is that you can use any miniatures you like.  Now I have quite a few trolls in my collection already, both painted and unpainted.  However, these are all of the Games Workshop "Stone" or "River" troll varieties.  They're not all GW models - some are not-quite-copies from Black Tree Design instead - but for Frostgrave I wanted something a bit more, well, shaggy. 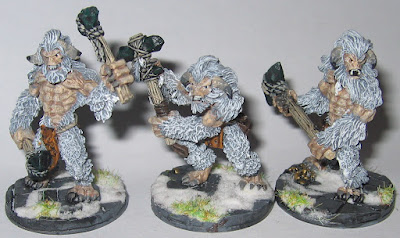 I searched for quite a while through various manufacturers' catalogues offerings of yetis and the like, but I didn't see anything that was quite how I imagined these creatures.  Then, almost as an afterthought, I stumbled across Crocodile Games' "Wendigo" range.  The moment I saw these, I knew that I had found my Ice Trolls!

These are quite easy to paint: the creatures' skin was layered in progressively lighter shades of brown through to tan whilst the fur was undercoated in a mid grey and drybrushed with pale grey and then white.  After that, there are a few details (weapons, loincloths, claws/horns/teeth, bases) and they're done.

These Wendigo warriors are quite large models, without being giants.  They're not especially cheap, though.  I bought mine from a UK stockist (Black Pyramid) and once postage has been taken into account, they cost me about GBP 4.60 each.  Of course, since they only come in a unit of 6, I've got another 3 models (including less useful horn blower and standard bearer figures) as yet unpainted.

Hmm, I wonder if 3 trolls is a bit over the top for Frostgrave?  Mind you, I did see a scenario on the web which used 3 of them as a leveller for when 1 wizard is of much greater experience/rank than any others, so maybe it's not so silly.  I am looking forward to seeing these guys splatter some incautious adventurers!
Posted by Colgar6 at 21:09