Once again, I've missed my weekend posting last Sunday.  Once again, I'll explain that this is because work and home life are getting on top of me and I'm having difficulty mustering enough enthusiasm and time to write articles (or indeed, to comment on other people's).  Still, my problems are insignificant when compared with what many people suffer.  Enough of that already!

In gaming news, the Frostgrave painting engine rolls on.  This time, I've got a couple of unusual creatures from Black Cat Bases to show you, so without any more rambling, here we go: 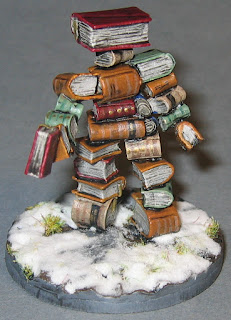 First up is a "Book Golem"; a magically-animated humanoid constructed entirely from books and scrolls.  This was great fun to paint, as it involved some unusual research and detailing.  It would be an obvious form of construct for a wizard of the Sigilist speciality to construct. 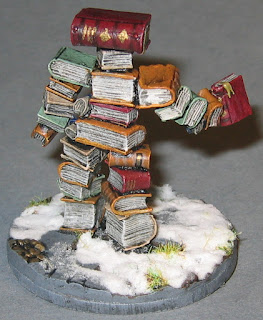 I wonder if the type of tomes from which this creature is constructed have any bearing on its behaviour?  If, for example, the magician built his monster from old county record books, the golem might be really dull and boring and only interested in land ownership.  On the other hand, if the wizard slipped in a few of the more racy pulp novels then who knows what the book creature might do?  Probably best not to think about this too much... 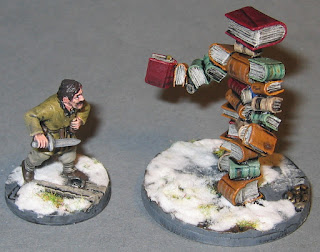 In the picture above, Oscar the Thief has been manipulated into standing next to the monster to provide a size comparison.  I think it's fair to say that this golem is a large construct.  Indeed, I think that Oscar is about to catch up on the book learning that he missed in earlier life, all in one go!

At the time of writing, the book golem costs £4 and is available from Black Cat Bases.

In the same order as the book golem, I also purchased an owlbear.  This is a very simple little single-piece model.  I painted it quite hurriedly, so I rate the result as "acceptable" rather than "outstanding".  At least it didn't take very long to complete!  I'll use it in Frostgrave as a regular bear, I think.

From the back, he (she?) could be mistaken for a straightforward bear.  However, in a city full of perilous magic it's not perhaps surprising that the poor creature has mutated.  I wonder if it was a deliberate act by a heartless wizard, or just one of those everyday magical accidents, though?  Was the animal targeted or merely unlucky?  Either way, it's now lost, confused and upset! 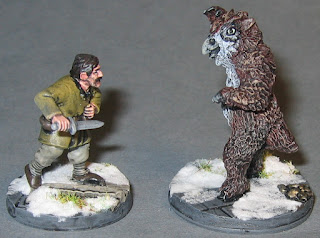 Oscar seems to have shaken off the book construct, but has come face to face with the owlbear.  As you can see, it's not the biggest monster around and any decent hero should be able to take it on single-handed.  I think that Oscar is outclassed, though!

The owlbear is available from Black Cat Bases for the small price of £3.  Incidentally, if anyone is looking for an alternative then Otherworld Miniatures do a couple of very nice owlbears but be warned - they're much more expensive than this one!