I'm continuing to hunt out old miniatures from my lead pile and paint them up for use in games of Frostgrave.  Last week, I showed my wizards, but I've also been working on monsters.  Indeed, I seem to have a lot more of these than I do humans - I'm quite short of ordinary soldiers.  Still, all things in good time.

Right, monsters.  I've painted up (or in a few cases, rebased existing models that seemed suitable) quite a few undead creatures.  They say that Frostgrave is a desolate, haunted place that is roamed by lost souls.  Let's see... 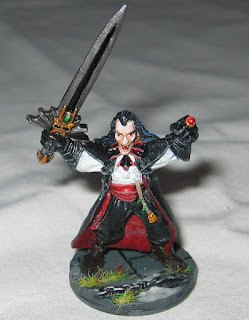 My vampire is an old Games Workshop miniature who has been "re-purposed" from my never-used Warhammer Vampire Counts army.  I think he's a Von Carstein or something like that.  This is one of the models that I had painted years ago, but the base is new and hopefully is more appropriate for a ruined, snowy city.

He wears classic vampire 18th/19th century costume - and is therefore several hundred years ahead of fashion in my medieval Frostgrave setting.  I could replace the model with something more contemporary in due course, but it's a very recognisable vampire look and so he might just stay.  I haven't fully decided yet. 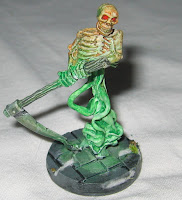 If this guy looks somewhat familiar then it's because I painted up some models just like this to act as apparitions in a Scooby Doo game, not that long ago.  He's another model from the same Black Tree Design set, but painted up slightly differently - especially the base!

These are my armoured skeletons, though if you prefer to call them "wights", "doom guard", "grave knights" or anything else then that's OK by me.  The red/black model in the middle is another Games Workshop figure that I painted long ago, though the basing is new.  However the other 2, recently-completed wights are from Black Tree Design. 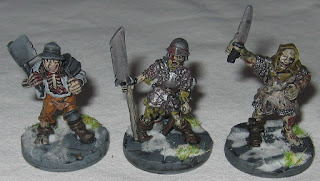 These zombies are a mixture of old Games Workshop and Black Tree Design/Harlequin models.  I'm not even sure that I can remember which is which, despite just painting then recently!

The guy on the left has a strange assortment of odd pieces of armour and a big, goofy grin; I'm not sure that I like this model very much.  However, the other 2 look very much like shambling, undead warriors to me; pretty much what I'd expect from medieval zombies! 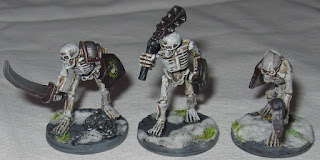 Finally, here are some Black Tree Design skeletons, though I don't think that the shields that I've fitted to them are the ones which were originally provided with the models.

As with the wights, these old BTD models are quite large; they'll tower over some of my humans.  Still, no-one ever said that skeleton warriors have to be average in size, right?

I've got a number of terrain pieces under construction or planned, as well as other monsters & creatures (demons, wolves, trolls and the like).  But I'm really short of suitable humans for the wizards' warbands.  That's probably where I should be spending my model-making effort, but I'm having too much fun painting up the wandering threats!  For now, at least...
Posted by Colgar6 at 17:01