7TV: Doctor Who and the Pyramids of Venus

This is a report on our first game of 7TV (2nd edition).  I've had a copy of the 1st edition rules for a long time, but I never got around to playing a game.  The new version was so enticing that I determined not to make the same mistake of just letting it gather dust on the bookshelf.

Sometime in the future, or maybe in an alternate universe, Venus has been terraformed enough to permit human settlement.  The growing mining and agricultural towns have encroached on ancient monuments left by some long forgotten race of aliens.  Most people regard these pyramids as mere curiosities; dusty relics from a distant age, but maybe they're more than that?

The Doctor has determined that the structures are anything but harmless; they form part of a key which could be used to summon back their terrifying creators.  He and his companions have decided to neutralise the threat by removing certain components.  In this they are accompanied by some local corporate law enforcement officials who have been persuaded of the danger.

However, other eyes have spotted the possibilities of the ancient, alien monuments as well.  The Master has tricked a squad of Sontaran soldiers into assisting him.  He seems to delight in sowing chaos and trouble wherever he goes, but who knows what are his real goals?  It's now a race to see which force can reach the Pyramids of Venus first!

For our first game of 7TV2, we decided to keep the sides quite small; we used 25 ratings each.  Also, there would be no customisation of any profiles; we'd use the characters exactly as written on the cards.  Fortunately there were enough suitable archetypes amongst the prebuilt 7TV characters to fill all our needs. 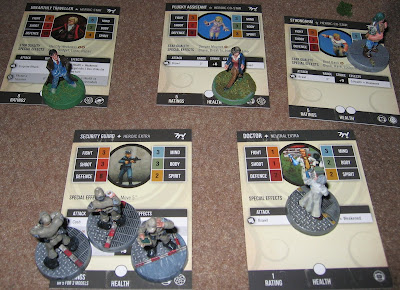 We decided that the heroic side should be heavy with stars and co-stars, backed up with a few local nonentities:

The heroic side ended up with 4 gadgets.  I've just realised that this was a mistake; they should only have kept 2, chosen from 4.  However, we only used 2 of the items during the game, so it's probably OK... 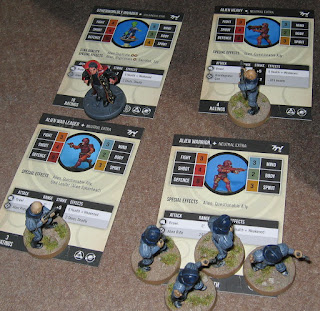 In contrast, the Master had a whole bunch of hired/tricked muscle with him, but wouldn't brook any competition from equals:
Since the Sontarans are all clones, there didn't seem much point in trying to give them names.  They'll remain as faceless minions, then.

The Master's side had just 1 gadget. 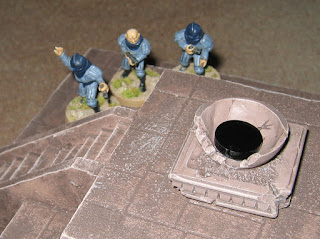 Both sides set up in 2 separate groups, each very close to an objective marker.  Indeed, the Master used his Spy ability to set up a bit further onto the table, right on top of one marker!

If we've understood the deployment rules correctly then it is entirely legal to begin within just a few inches of an objective.  Consequently, 4 of the 5 such markers were claimed within the very first turn.  I think I'll need to re-read this part of the rules quite carefully; it seems like a surprising result and I'm concerned that we may have misunderstood something.


The first hostile act occurred when Knuckles attempted to advance round the extreme right-hand pyramid.  A squat alien with a very big gun stepped forward to get a better shot and then gunned down the human at long range.  The disintegrator cannon didn't leave much of Knuckles, just hot ashes  [What?  The alien heavy has a strike value of +12!  Most minion attacks are in the +6 to +8 range.  That's an anti-tank weapon; poor Knuckles didn't have even a remote chance of surviving]. 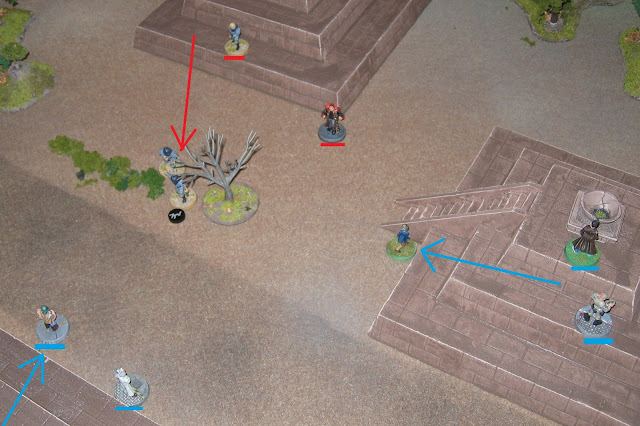 Although Knuckles distracted some of the alien soldiers, this was really just a sideshow.  The main action took place in the centre of the table in the flat ground between the 3 pyramids.

Further Sontaran warriors, encouraged by the Master, claimed the 5th and final objective.  The Doctor was busy studying the ancient writing on the ceremonial bowls on top of one of the monuments, so it was up to Sarah Jane and Dexter to try to thwart the evil side's nefarious plans. 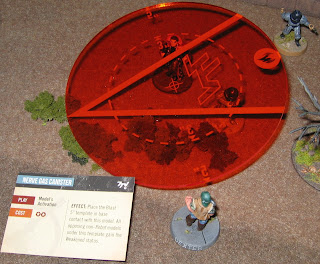 As the aliens started to retreat with their prize, Dexter ran forwards.  "You wanna fight?  Ah'll gub you, see if ah doan't!" he shouted as he threw a tear-gas cannister towards the aliens.  The bomb left both the Master and a Sontaran reeling. 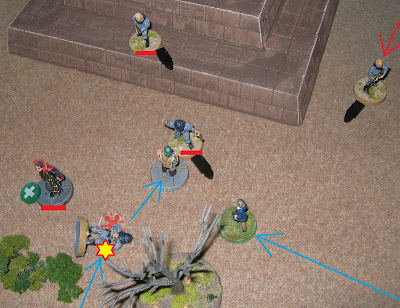 Dexter flattened the Sontaran warrior with his jemmy, then rampaged onwards into a second alien.  As he did this, Sarah Jane ran forward to help (though it's not obvious what assistance she might have offered).  All the alien heads immediately swivelled in her direction and she was met by a torrent of fire [that's the Danger Magnet special effect; enemies within 6" may not attack anyone else when it's activated].

Somehow, Sarah Jane survived the fusillade; the alien pistols and rifles all missed.  The soldier with the disintegrator cannon had also wandered in; this was a much more significant threat that would probably have left SJ as a cloud of rapidly expanding hot gas.  However, the timely application of a First Aid Kit gadget cancelled the effects from that strike.  As one of the good guys, this alien heavy was really worrying me! 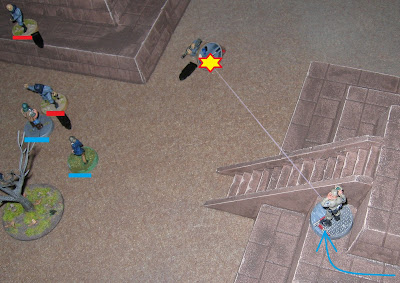 OK, what can we do about the nasty Sontaran cannon, then?  I don't fancy the Doctor's chances if he tries to talk the alien into disarming, nor Sarah Jane's chances in a brawl.  Instead, the only guy we've got nearby who isn't occupied is Paddy, the corporate guard.  He edged round the pyramid and pulled out his pistol.  It wasn't much of a chance against the Sontaran's battle armour, but he fired anyway.

The evil side were so full of confidence (or lacking in experience of the rules?) that they didn't bother to spend any plot points to boost their defence roll.  The good guys were running on empty and couldn't afford any plot points to improve their own chances.  And what do you know - Paddy rolled high and plugged the bad guy! 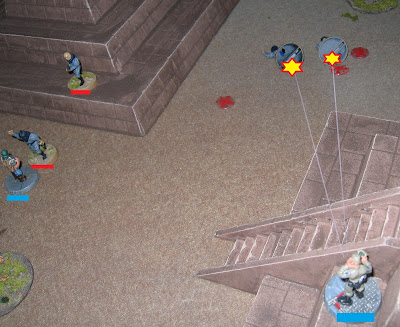 The remaining 2 unengaged Sontarans now advanced from the woods to assist their embattled colleagues.  Paddy had a pistol, which gets 2 shots per turn.  He was the only thing between the alien warriors and his friends, so he fired.  Once again, pistol versus battle armour isn't a good match, but he scored fatal hits with both shots.  Jaws were dropping by this time, I can tell you!

Sarah Jane had been injured by the Sontaran leader during another round of "Danger Magnet" shooting, so she had retired a short way to be tended by Dr. Ness.  She was soon bandaged and ready to go again. 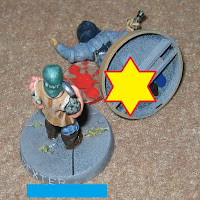 Not to be outdone by a pseudo-policeman, Dexter crowbarred another Sontaran warrior into a motionless heap.  Within 2 (?) turns of fighting, the evil cast had been thoroughly axed! 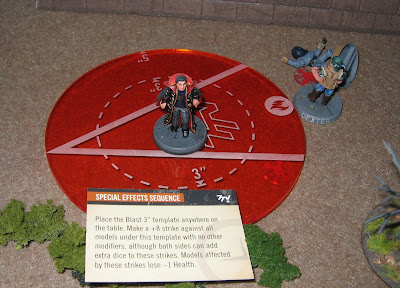 To add insult to injury (and for no well-explained reason), the Master suddenly exploded!  He wasn't hurt by the fireball, but it might have rattled the players on the evil side... 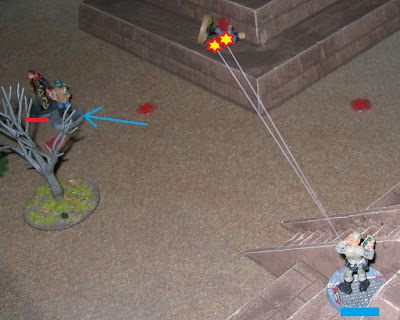 The evil side were now down to just 2 figures.  Dexter charged at the Master, shouting a traditional war cry: "Hey, you!  Big man!  You're going DOWN!"

Paddy took aim at the Sontaran commander.  Once again, the odds were against him, but his bullet hit the bad guy.  The evil side were quick to point out that this Sontaran had 2 health points, so Paddy fired again (pistols are allowed 2 shots, remember?).  There was a stunned silence when his second shot hit the alien leader squarely between the eyes and felled him.  That's 5 shots in a row against the odds, without a single miss... 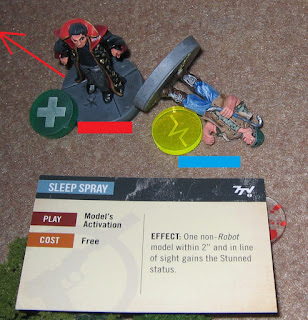 Dexter gave the Master an almighty thump that staggered the Timelord.  However, before he could capitalise on this advantage, the scheming villain pulled something from his sleeve and sprayed it in Dexter's face.  The human fell to the ground, momentarily disoriented.  When he recovered his wits a short time later, the Master was nowhere to be seen; he had fled!

This game started off a bit slowly.  I think that we all felt a slight sense of let down when all the objectives were claimed within 2 or 3 turns.  There was a distinct sense of "what happens next?  What do we do now?"  However, once Dexter and Sarah Jane attempted to drive off the aliens, things certainly hotted up.  In the end the Master escaped, leaving his minions scattered and destroyed.  This seems very appropriate!

I think we were probably playing on too big a table (4' x 4') for the small, 25 rating casts that we used.  Coupled with this, we should also have used 5 cards in each countdown sequence rather than 6, so that the small game would have ended sooner.  Still, for a first outing I'm quite pleased with the way this game went.

Biggest disappointment: the Doctor spent almost all of the game just staring at ancient stonework.
Biggest surprise: has to be Paddy!  I mean, the man deserves a medal or something.  Without him, the heroic side were almost certainly in big trouble.

And the final victory point score, for anyone who cares:
So it's a draw!
Posted by Colgar6 at 14:14