This is a slightly late posting, but it's still Sunday and therefore within the Zomtober rules.  Phew!  I've been away for the weekend (it was my wife's birthday), so it's just as well that I had prepared these figures earlier last week than usual.

So, as is my custom for these posts, here's another duel between a zombie and a survivor.  What do you think happens next? 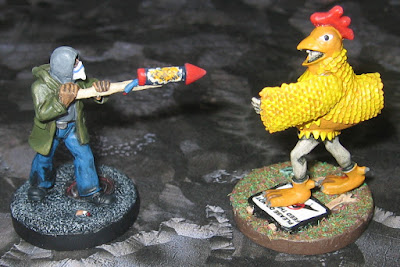 Tonight's main attraction is a contest between Nadim and Chicken Man Zombie (CMZ).  Nadim is using an unusual anti-zombie weapon: a giant firework rocket ("The Big One").  He is wearing a handkerchief over his face, possibly to protect against sparks or to protect himself from inhaling zombie bits if his planned rocket attack is successful.  That may also explain the hoodie pulled up over his head. 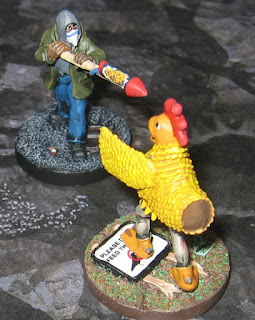 CMZ has been described by the owner of Studio Miniatures (who make the figure) as "the unluckiest man in the zombie apocalypse".  I'm paraphrasing here rather than providing an exact quote, but I expect you get the idea.
After all, having a job that involves dressing up as a giant chicken is fairly unlucky in the first place.  Being bitten by a zombie and therefore infected yourself whilst at work in a job that requires you to dress up as a giant chicken is just stupendously unlucky!
[Hmm, that could be another theme for someone to pursue in Zomtober: "the unluckiest man/woman in the apocalypse".  Please feel free to use this if you wish...] 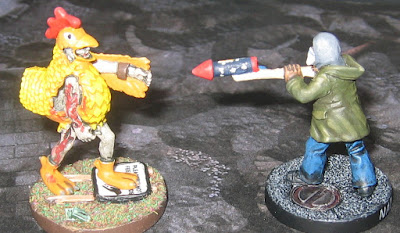 As mentioned above, CMZ is from Studio Miniatures, specifically from "Zombie Mob 002".  Like many of my recent urban figures, he's on an Escenorama base.  In this case, CMZ is trampling a sign that had been placed on the grass.  I found a picture on the internet of a suitable admonition, scaled it down, printed it and stuck it to the sign.  In case you cannot read the sign under CMZ's foot, the it reads "Please do not feed the birds".  There is also a small sheet of green paper on the ground nearby; perhaps this is an advertising flyer that has been dropped by CMZ?

Nadim is yet another of the young thugs from Offensive Miniature's "12 Street Kids" pack, in the Near Future, Rioting Mob range.  His base is also from Escenorama, though in this case it's a rather simpler pattern.  There's nothing on the ground here other than a small metal cover and a cigarette butt (visible in the earlier pictures).  Maybe that's what Nadim used to light his firework? 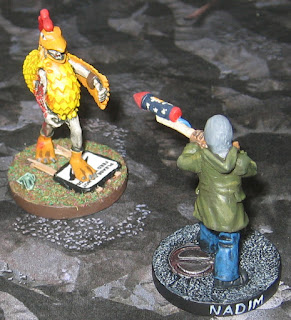 So, here's my reading of the situation: if Nadim hits CMZ with the rocket and if the firework catches on the zombie's costume then I've no doubt that the resulting explosion will do a lot of damage to the zombie.  But there are a lot of "ifs" here:
No, I think that this is what happens: the rocket ignites but the backblast burns Nadim's face and blinds him.  The firework then skids off CMZ or misses him completely and the zombie attacks immediately and bites the stunned human.  Assuming, of course, that CMZ can bite anything whilst wearing that ridiculous costume rooster head...