In the first installment of this tale, we left the Sheriff of Nottingham about to knife a pinioned outlaw, whilst Robin Hood was beset by the Black Knight and distracted by Yorick the Jester.  What happens next?  Read on... 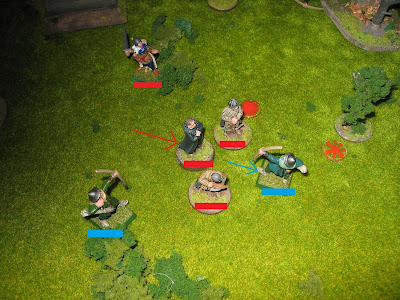 As the Sheriff stepped forwards, the desperate outlaw struggled violently with his captors.  His sudden energy took the soldiers by surprise and the forester broke free [Well, I didn't expect that!  As the Sheriff, I was fairly confident of winning this fight.  Nottingham had a combat score of 3, versus the archer's C2 - reduced to 0 by the presence of 2 extra enemies.  With a d6+3, all I had to do was score double the outlaw's d6+0 for him to be killed.  But it wasn't to be...]. 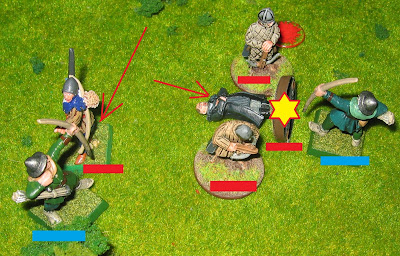 There was a moment of stunned silence, followed by the (muted) singing by the outlaw players of a well-known Bob Marley song: "I shot the Sheriff!  But I didn't shoot no deputy..." .

As the Sheriff was a Leader, his force then had to take a morale test.  This scattered them even further than they were already; one or two ran away for good.  And it was all going so well for the authorities before that!

To cap this, the Sheriff's band was reduced to half strength very soon afterwards (next turn?), resulting in another morale check and a thinning of the ranks of those left.  At least Yorick and the Black Knight didn't run away! 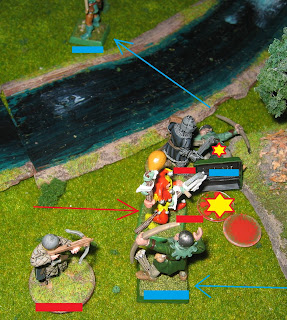 At the edge of the river, Robin Hood broke off his combat with the Black Knight and ran towards the fight between Little John and Guy of Gisborne.  Little John had run straight into the centre of a group of enemy soldiers and even though he had felled a couple of them, the big outlaw was now surrounded, injured and fighting for his life.

This left Yorick and the Black Knight free to finish off the nearby outlaws, though they made heavy going of it even then. 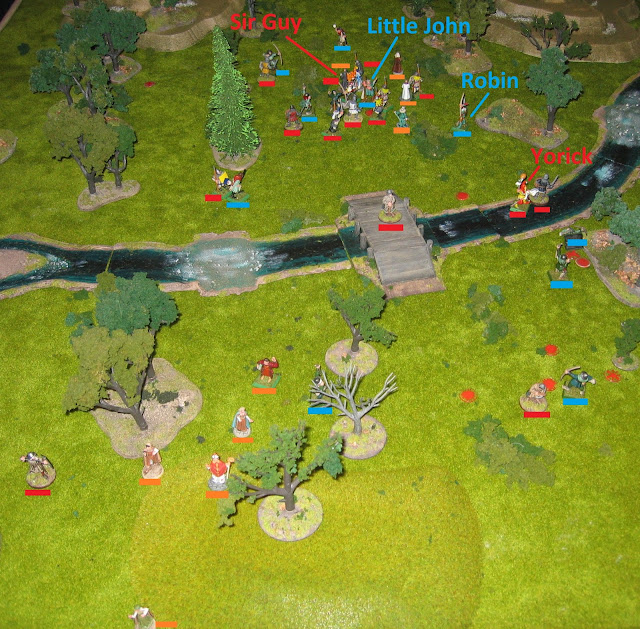 The Sheriff's men-at-arms had been slowly shepherding a number of civilians towards the edge of the table.  When the double morale-check disaster struck, some of these civilians were very nearly off to safety (and thus would have scored 3 victory points each for the authorities).  Instead, they were now lost and abandoned in the forest as their guides fled! 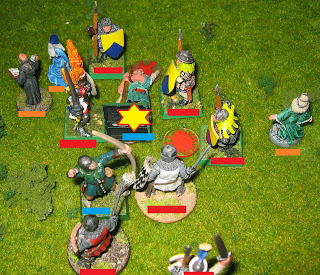 Despite everything, Robin was too late to help his friend.  Little John fell to the ground, got up again and fought on briefly before Guy of Gisborne delivered a fatal blow that stretched the massive outlaw flat on the grass.

This loss took Little John's band below half strength; the resulting morale check caused most of his remaining outlaws to scatter or flee. 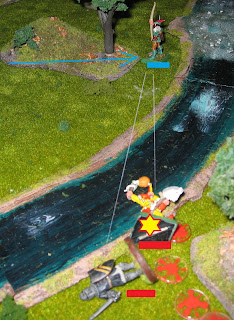 In a moment of hesitation, Robin ran for the forest [his warband had just been reduced to half strength when another outlaw was killed].  When he recovered his wits, he was perfectly placed to shoot at the Sheriff's men who were pursuing him.  Despite his acrobatic dodging, Yorick took one of Robin's arrows in the chest and died immediately.  Warned by this, the Black Knight ducked, the second arrow missed and he survived with nothing but his pride injured. 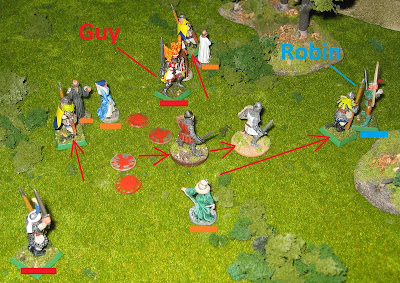 There were small skirmishes all over the table as the remnants of the 4 warbands hunted each other down.  Surprisingly, the losses from these little battles tended to be very even, thus reducing the forces even more - but no-one was prepared to concede; everyone still felt they had a chance to win the game.

Guy's squad was still above strength (barely!).  Some of his men started to usher the civilians away from the gory scene of Little John's fall when one of them spied movement in the nearby trees.  "It's the outlaw chief himself!" the man cried as he took off in pursuit.  The nearby knights were either more cautious or slower-witted; they weren't quite so quick off the mark.

This was the prelude to what was probably the most prolonged and dramatic piece of derring do that I have ever seen in a wargame; easily worthy of an Errol Flynn movie!  Although there were a handful of other models still on the table, they all fought each other to extinction or joined in this last, great combat.  What you're about to see ended up involving the few remaining figures from all 4 warbands.

That was, without a doubt, the most tense and exciting finish to any game that we have played for a long time!  Both sides were completely involved and felt that they had a very good chance of winning, right until the very last throw of the dice.  In the end, none of the civilians were taken off the board, but both sides scored very high for eliminating enemy models.  It has to be a marginal win to the authorities, though: they had 1 man left whereas the outlaws had none!

Man of the Match: Sir Guy of Gisborne, by my reckoning.  He defeated both Little John and Robin Hood.  His heavy armour saved him on numerous occasions as well; it's as if he had a charmed life.

Most Useless: This has to be Friar Tuck.  His brief appearance was anything but heroic!  Although the Sheriff of Nottingham came to an unlikely end and could therefore be considered for this award, , he had been quite an effective leader up to that point and therefore doesn't qualify.