Fresh off the painting table this last week: more Super Dungeon Explore figures.  This time, it's the Stilt-town Zombies warband.  Why are the called that?  Well, apparently the local villagers build their houses on stilts so as to provide themselves with some protection from this group of marauders.  Oh - and this warband consists of zombies! 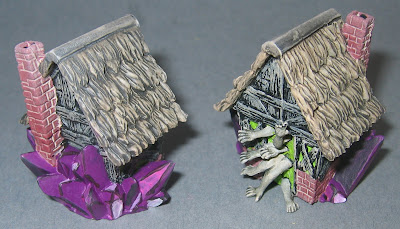 All SDE warbands have either 1 or 2 spawn points.  These are the places where the rest of the warband comes from, so it's important for the heroes to destroy them as quickly as they can.  For a zombie warband, the monsters come from a Grabby House - a deserted, rundown cottage that has been overtaken by eerie crystals and glowing lights.  Models close to such a spawn point gain the Grabby attribute, which means that the heroes cannot break off combat or move past them. 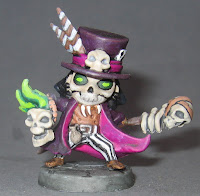 The leader of a zombie warband is a Shamble Priest.  It's not clear whether he/she/it is undead him/her/itself, or is just plain evil.  Either way, this character has some debilitating ranged magic powers and (as might be expected) the abilities to create fresh and encourage existing zombies.  As well as a bizarre sense of fashion... 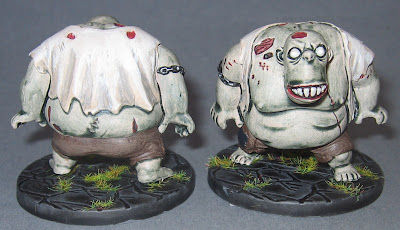 There are 3 classes of minion in a group of Stilt-town undead.  Firstly, there are the huge pudge zombies.  It's not often that you'll come across a model in a game which has Disgusting and Gross attacks & attributes, but here is one such creature.  Since the Disgusting attack is ranged and poisons all opponents in a straight line, I think it's fair to say that its exact nature is best left to the imagination.  Similarly, when a pudge is destroyed it makes an immediate attack against adjacent enemies, so I imagine that it bursts and sprays them with innards or something like that.  Best if you don't think about this too much... 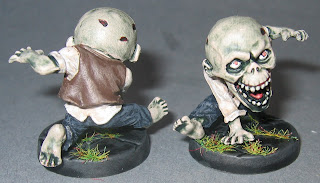 The second class of zombie minion in this group is the stealthy Prowler.  These are somewhat unusual (for a zombie) in that they're very fast.  They also have an ability which can heal the Shamble Priest if they (i.e. the prowlers) inflict any wounds.  Sounds useful... 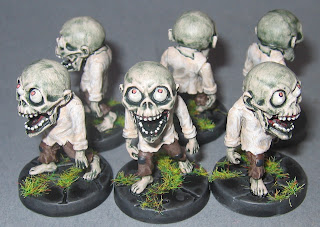 Finally, here are the classic zombies; in this setting they're called Swampies.  Individually they are fairly slow and weak, but they do have the grabby and mob attributes.  This means that the heroes cannot retreat from a fight once they have engaged and that the zombies get extra attack dice for each other member of the mob.  Don't get caught; they'll swamp you! 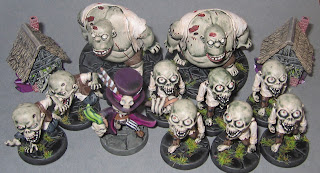 You can tell from this group shot that I painted the shamble priest some time before the rest; the model's base is quite different.  Actually, I finished the zombies themselves a few weeks ago; it was only the houses which remained incomplete until this week.  Did I mention before how much I dislike painting crystals?  They're quite common (indeed, universal!) on spawn points for Super Dungeon Explore...
Posted by Colgar6 at 15:57